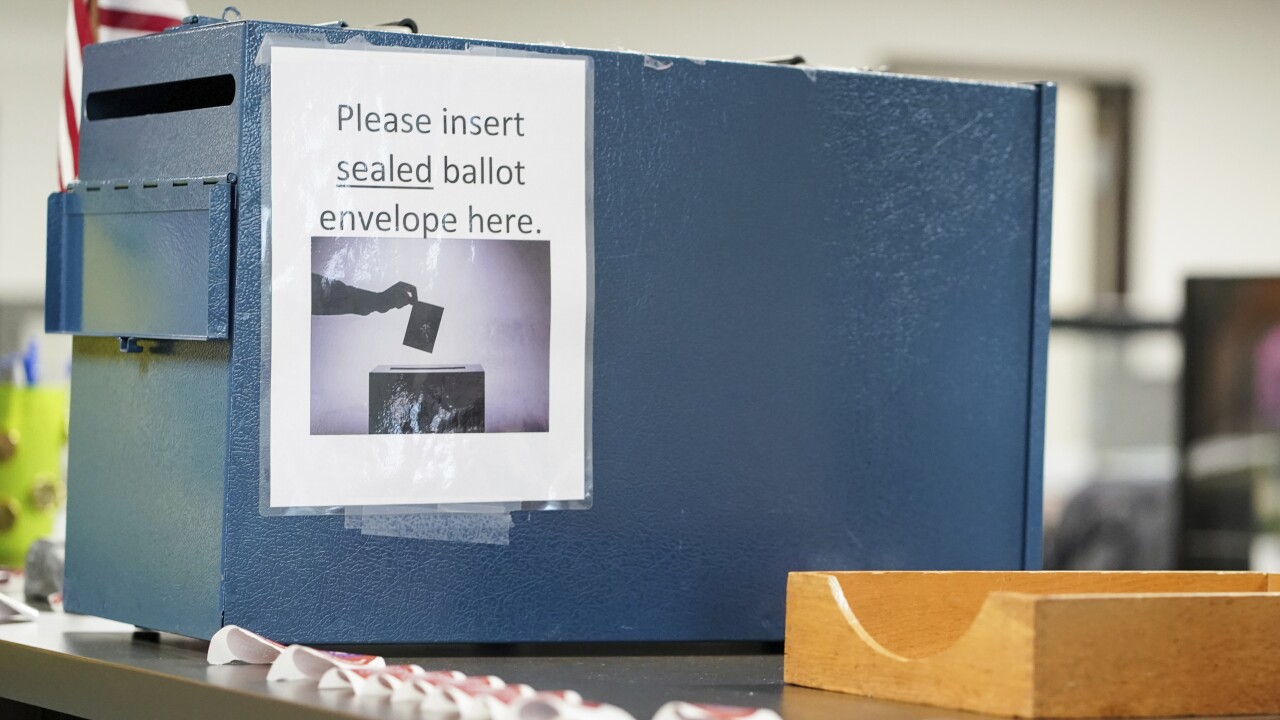 Aaron Doster/AP
This Saturday, March 14, 2020 file photo, shows a view of a ballot box on a counter prepared for early voting at the Warren County Board of Elections, in Lebanon, Ohio. Ohio and Republican groups including the Trump campaign are defending a GOP election chief's directive limiting ballot drop boxes in the critical presidential battleground to one per county. (AP Photo/Aaron Doster, File)

CINCINNATI (AP) — With early voting already underway in Ohio, a pingpong game in the courts over a one-per-county limit on the number of ballot drop boxes in the presidential battleground state turned back in the Republicans’ favor Friday with a decision in a federal appellate court.

A three-judge panel of the 6th U.S. Circuit Court of Appeals approved Republican Secretary of State Frank LaRose’s request to put on hold a lower federal judge’s decision to block his directive, which Democrats have argued would limit voters’ access to the polls.

With his order once again intact, LaRose can proceed with an appeal of U.S. District Judge Dan Polster’s decision that limiting drop boxes impeded the “vital constitutional right” of voting.

Not granting the stay would harm the election process through potential squandering of resources while the case is ironed out, Judge Richard Griffin wrote. The stay is also unlikely to harm anyone, because Ohio offers many ways to vote, he wrote.

“The Supreme Court has repeatedly emphasized that lower federal courts should ordinarily not alter election rules on the eve of an election,” Griffin wrote. “Here, the district court went a step further and altered election rules during an election.”

Polster’s decision had marked the second time in recent weeks that a court ruled against LaRose’s directive.

Voter advocates are keen on expanding access to drop boxes, which some voters see as an attractive option amid concerns about Postal Service cuts and the coronavirus pandemic, and which are often sought by urban, more Democratic-leaning counties.

Three courts have scolded LaRose for the original drop box directive, calling it unreasonable and arbitrary. A state appellate court made clear he had the authority to remedy the order under law.

The waters were further muddied when LaRose issued an update to the directive restricting them to county election board offices or “outside” them. Polster interpreted that as meaning anywhere outside the building, even off site, while LaRose’s office argued it restricted the boxes to election board property.

The federal appeals court is now the highest court to have gotten a piece of the case, and gave LaRose — and his Republican allies in the case, including President Donald Trump’s campaign and the Republican National Committee — a victory.