5 takeaways from the final presidential debate 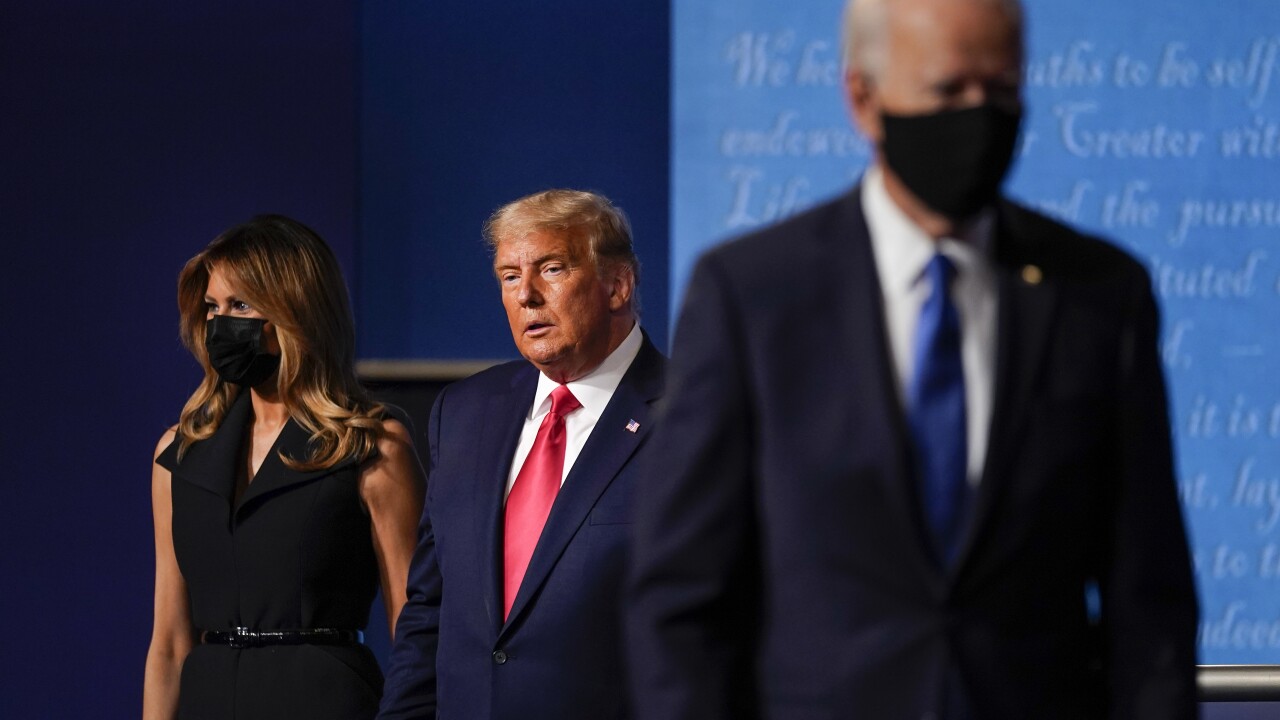 President Donald Trump and Joe Biden met for the second and final time for Thursday’s debate before next month’s presidential election. For millions of voters, their decision has already been made as early voting figures are being tallied at a record pace.

NBC News anchor Kristen Welker presided over a debate that featured fewer interruptions between the candidates.

Trump backed reopening the economy as America encounters another wave of coronavirus cases. During Thursday’s debate, Trump said that Biden wanted to shut down the economy while slamming the leaders of Democrat-led states for their handling of the coronavirus.

While the coronavirus has a 99% survival rate, public health experts have warned that the virus causes long-term health effects, including lung and heart damage.

Biden has said that he would listen to scientists on whether to recommend economic shutdowns amid the pandemic.

“What I would say is I'm going to shut down the virus, not the country,” Biden said. “It's his ineptitude, the cause, the virus caused the country to have to shut down in large part. Why businesses have gone under; why schools are closed. Why so many people have lost their living and why they're concerned. Those other concerns are real.”

Biden challenged the president for his handling of the pandemic.

Trump defended his handling of the virus, pointing out that the federal government is ready to distribute a vaccine once one is approved by the FDA.

“I think my timeline is going to be more accurate,” Trump said, casting doubt on lengthier timelines offered by public health experts. “I don't know that they're counting on the military the way I do, but we have our generals lined up-- one in particular -- that's the head of logistics and this is a very easy distribution for him. He's ready to go. As soon as we have the vaccine, and we expect to have a hundred million vials, as soon as we have the vaccine, he's ready to go.”

If elected, Biden said, he would offer a pathway to citizenship for nearly 11 million Americans. Dreamers were generally brought to the US at a young age and never gained full legal status. DACA, signed by President Barack Obama as an executive order, protected a group of 800,000 American residents from deportation. Those 800,000 young undocumented immigrants were those who entered the United States as a child and have been in the United States since 2007.

Those who qualify under DACA are given two-year work permits, which allows them to stay in the United States with some legal status.

But Biden said that his plan would go a step further, offering legal status to millions of additional undocumented immigrants.

But Trump decried Biden during his time serving as Obama’s vice president, saying that the Obama administration built “cages” used to keep children in custody.

Biden criticized Trump’s proposal to eliminate the payroll tax, echoing claims that eliminating the payroll tax would cause Social Security to run out of funding by 2023.

Stephen Goss, the chief actuary for the Social Security Administration, told the US Senate in August that a hypothetical bill that would make the tax deferment permanent would cause Social Security to no longer be able to make payments to beneficiaries by the middle of 2023.

Trump first said during Thursday’s debate that increasing the minimum wage should be a “state option,” but moments later, he conceded he would be open to raising the federal minimum wage.

However, Trump said, “I would consider it to an extent in a second administration, but not to a level that would put them out of business.”

Trump said that in some areas, a $15 minimum wage makes sense, but not in other regions.

Biden suggested that a national minimum wage should be $15 an hour. However, Biden claimed that first responders are making as little as $6 an hour, while the federal minimum wage is $7.25.

“They deserve a minimum wage of $15. Anything below that puts you below the poverty level. There is no evidence that when you raise the minimum wage, businesses go out of business,” Biden responded.

The final question Welker posed to the candidates was what their message would be, if elected, to those who do not vote for them.

“We have to make our country totally successful as it was prior to the plague coming in from China,” Trump said. “Now we are doing record numbers. 11.4 million jobs in a short time, etc. Before the plague came in, I was getting calls from people that would not normally call me. They wanted to get together.

"We had the best Black unemployment numbers in the history of our country, Hispanics, women, Asian, people with diplomas, with no dimplomas, everyone had the best numbers. The other side wanted to unify. Success is going to bring us together.”

“I am an American president,” Biden said. “I represent all of you whether you vote for me or against me. I will give you hope. We will choose science over fiction, hope over fear. We will choose to move forward because we have enormous opportunities -- enormous opportunities. We can grow this economy. At the same time we can make sure our economy is being motivated by clean energy, creating millions of new jobs.

“That is what we are going to do. As I said at the beginning, what is on the ballot is the character of this country. Decency, honor, respect, treating people with dignity.”