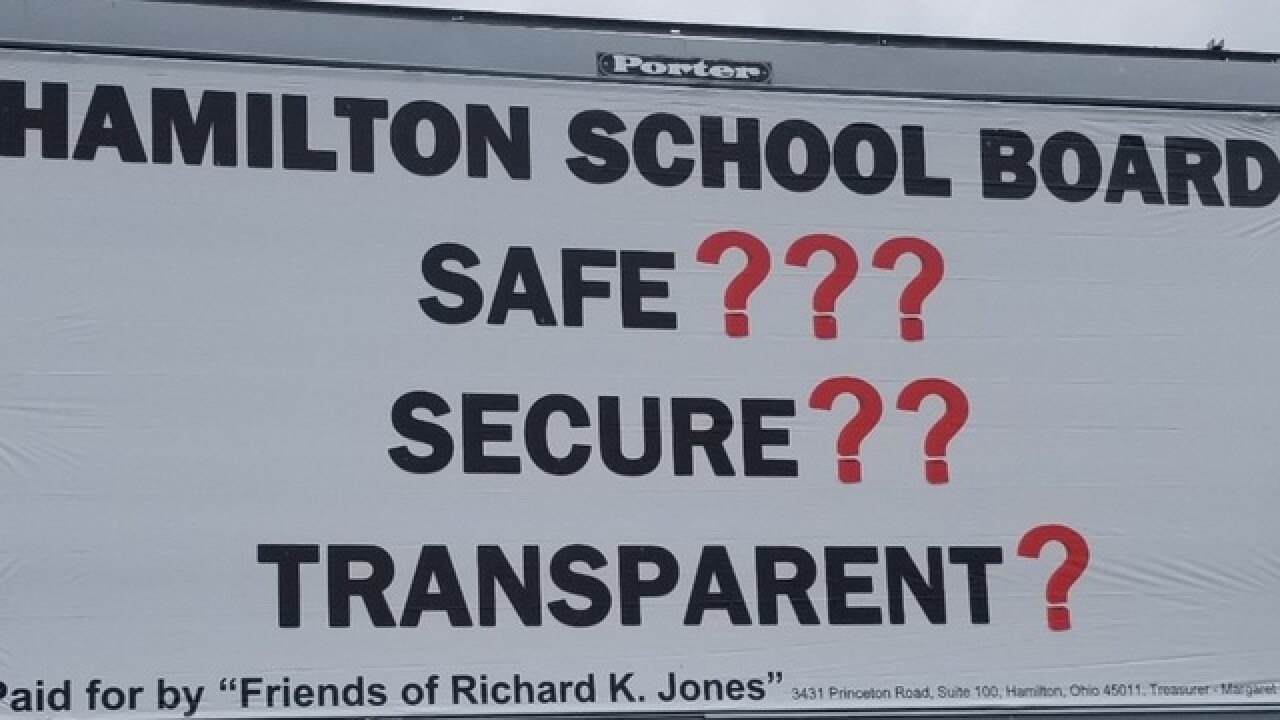 HAMILTON, Ohio -- The Hamilton school board was the first target of a public, advertising campaign by Butler County’s top law enforcement official, who contends the school district isn’t doing enough to protect students.

And Butler County Sheriff Richard Jones promises there will be more billboards criticizing other local school boards for what he sees as their too-slow efforts to upgrade school security.

Jones, who was one of the first in the nation to advocate allowing trained school staffers access to firearms, said he first targeted Hamilton City Schools because of its governing board.

“They have one of the worst reputations of all the (Butler County) school boards,” he told the Journal-News.

“They don’t talk to the public. They keep it all a secret,” Jones said, referring in part to the district’s separation agreement with former Superintendent Tony Orr in April that was based on a still-unreleased investigative report into allegations Orr violated school district policies.

“Some of the other (local) school boards I’m working with and some of them not. This (billboard) is one of many that are going up throughout the county. I want schools to be safe,” Jones said.

Jones stressed his criticism of Hamilton City Schools does not extend to the city’s police department, which provides officers to the 10,000-student district.

The new leader of Hamilton Schools reacted quickly to the unusual and highly public criticism.

“In our ongoing effort to be transparent, last week we reached out to Sheriff Jones and he has agreed to meet with us. We plan on sharing our current safety procedures and protocols and also additional measures we would like to implement in the future,” Knapp said.

Jones confirmed the upcoming meeting and said his first question will be: “I want to know what they have done since these school shootings and what they are going to do,” referencing the rash of deadly attacks on schools in Florida, Texas and elsewhere last school year.

In May, Knapp said updates coming to the school district's security included:

E-mails sent by the Journal-News to the five members of the Hamilton school board seeking their comments about Jones’ criticisms did not elicit responses.

The billboard and others are privately funded and not paid for by taxpayers, according to Jones.

In March, the Journal-News was the first local media outlet to report that Jones would soon erect roadside billboards with messages calling for local school boards to quickly upgrade their school security against deadly, armed attacks.

Using social media, Jones campaigned to have Butler County residents -- even those who do not live within the communities patrolled by the sheriff’s department -- pressure their local board members to strengthen security.

Jones has also offered free concealed-carry training to school staffers in hopes that his idea of arming some teachers and staffers in schools is adopted by local school districts.

“When you are looking at (saving) lives, you can’t wait,” he previously told the Journal-News.

Of the school boards that don’t make security updates, Jones previously warned, “I will be their worst enemy.”