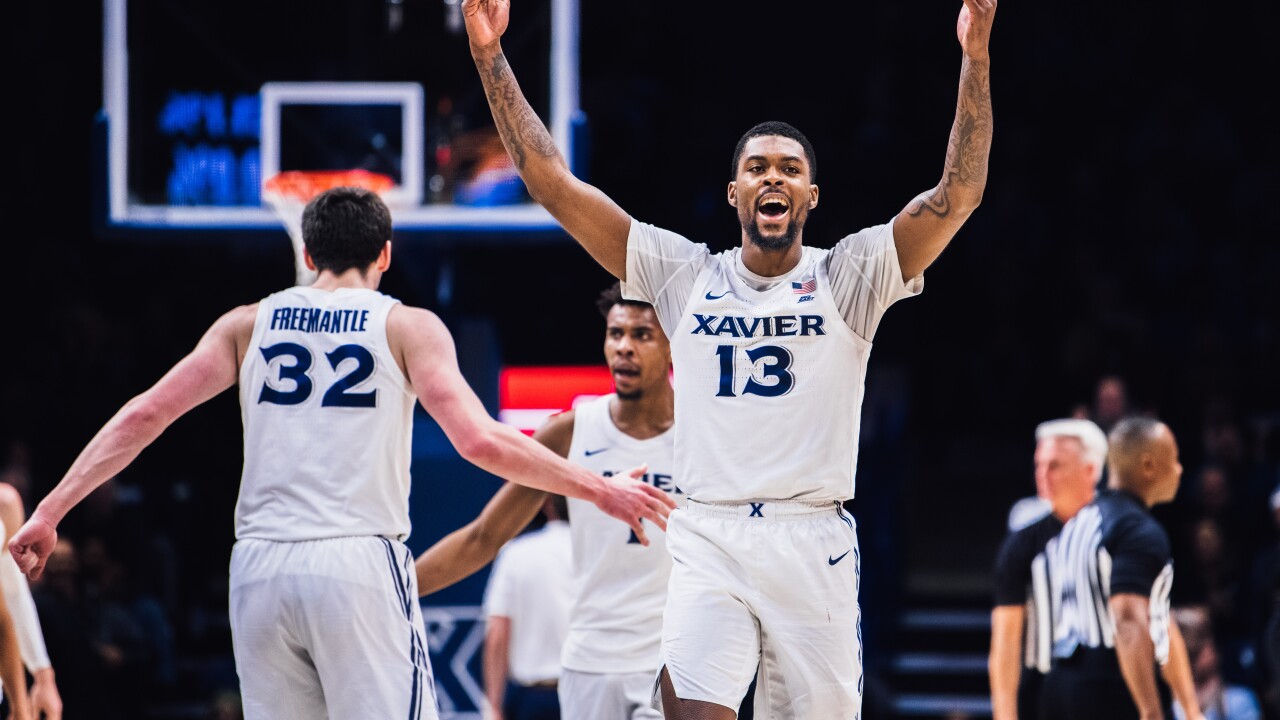 If you’re looking for the stylish, high-flying hoops of past seasons at Cintas Center, this year’s Xavier team might disappoint.

Until they get fully healthy and gain some semblance of continuity on offense, the Musketeers will have to win ugly. Travis Steele’s mandate that his team be “elite” defensively isn’t just coach-speak. It’s a matter of necessity.

On Tuesday night, 21st-ranked Xavier overcame some woeful shooting to outlast the Missouri Tigers 63-58 in overtime. This game was no Picasso. Far from it.

In the first half, Xavier limited the Tigers to just 25% shooting. Mizzou went 1-for-9 from three-point range. The Musketeers forced 13 turnovers.

After halftime, Xavier went cold. The Musketeers went scoreless for more than seven minutes. They made one of nine three-point shot attempts: Naji Marshall’s game-tying three-pointer with 26 seconds left.

“This game came down to toughness,” Steele said. “I’m from a small town, this was what we call a rock fight.”

The Musketeers held Missouri to one field goal in overtime. Xavier went 8 of 10 from the free throw line — something that hasn’t been a strength this season — to seal the victory.

And there was an element of nastiness.

With 5:22 left in the first half, 6-foot-8-inch junior Jason Carter, an Ohio University transfer, came down with a rebound surrounded by three Missouri Tigers. Elbows flailed, players bodied up, and Carter ultimately was fouled. The Musketeers’ bench erupted. Cintas rocked.

In the second half, Musketeers guard Quentin Goodin saved a ball from going out of bounds by pounding it off Missouri’s Mitchell Smith. Glares were exchanged. Again, Cintas roared.

Even amid a second-half drought that was so un-Cintas like that it had the sold-out crowd of 10,224 paying closer attention to Evansville’s upset of top-ranked Kentucky, the Musketeers never backed down.

Tuesday’s game wasn’t for the meek.

“On the defensive end we brought a bunch of intensity,” said junior guard Paul Scruggs. “We just locked up. We showed we can fight through that adversity. It showed our team is here. We came into this game knowing we had to attack and keep attacking.”

“We picked our brothers up,” Carter added.

Steele commended his players for not taking their foot off the gas defensively, even while they were falling apart at the offensive end of the floor.

“They did what we ask them to do, to not attach our defense to our offense,” Steele said. “I’m really proud of how our guys responded.”

Scruggs delivered his own version of toughness, playing with his left leg wrapped after missing one game with a knee sprain. He scored all 12 of his points after halftime including four crucial points in overtime.

Steele had a team of warriors on Tuesday.

With their half-court offense in disarray, the Musketeers generated 18 points of 20 Missouri turnovers. They got 10 points off fast-break opportunities.

Xavier hasn’t produced the most beautiful brand of basketball during the first three games, but the track record of the players on the roster and the impending debut of freshman guard KyKy Tandy, who is out injured, are indications that the offense could eventually come.

Through three games, the Musketeers are 13 of 63 from three-point range for a whopping 20%. Many of those misses haven’t been bad looks, and Steele is confident that the shots eventually will find their way through the net.

Until then, the defensive effort has to be a constant.

A brief three-point barrage aside, that was the case for the Musketeers on Tuesday night. Missouri was 0-for-8 from three-point range before finally connecting just before the halftime buzzer.

Tuesday night was a decent measuring stick, albeit one that arrived early in the season.

Last year in Columbia, Missouri, the Musketeers got pushed around in a 71-56 loss to the Tigers. Xavier trailed by as many as 29 points. In that game, Mizzou forward Jeremiah Tilmon dominated the post with a career-high 23 points on 10 of 15 shooting and 10 rebounds.

On Tuesday, Tilmon scored only eight points and spent most of the night mired in foul trouble.

The Musketeers had 10 “kills” on Tuesday night, something Xavier’s coaches have been keeping track of for a few years now. A kill is three consecutive defensive stops. The team’s tally now is being tracked on the scoreboard at Cintas. When Xavier gets more than seven kills, they win 98% of their games. Tuesday night nearly defied that statistic.

It is early in the season, of course. The Musketeers have a few months to hit their stride offensively. But Xavier’s identity is beginning to take shape.

November is the month when pretty much every college basketball coach in America is seeking identity for his team, no matter how talented the roster might be on paper.

“It takes time,” Steele said. “You try to figure out your team. How you look now can be totally different than how you are at the end of the season. It’s all about sticking to the process and getting better every single day.”