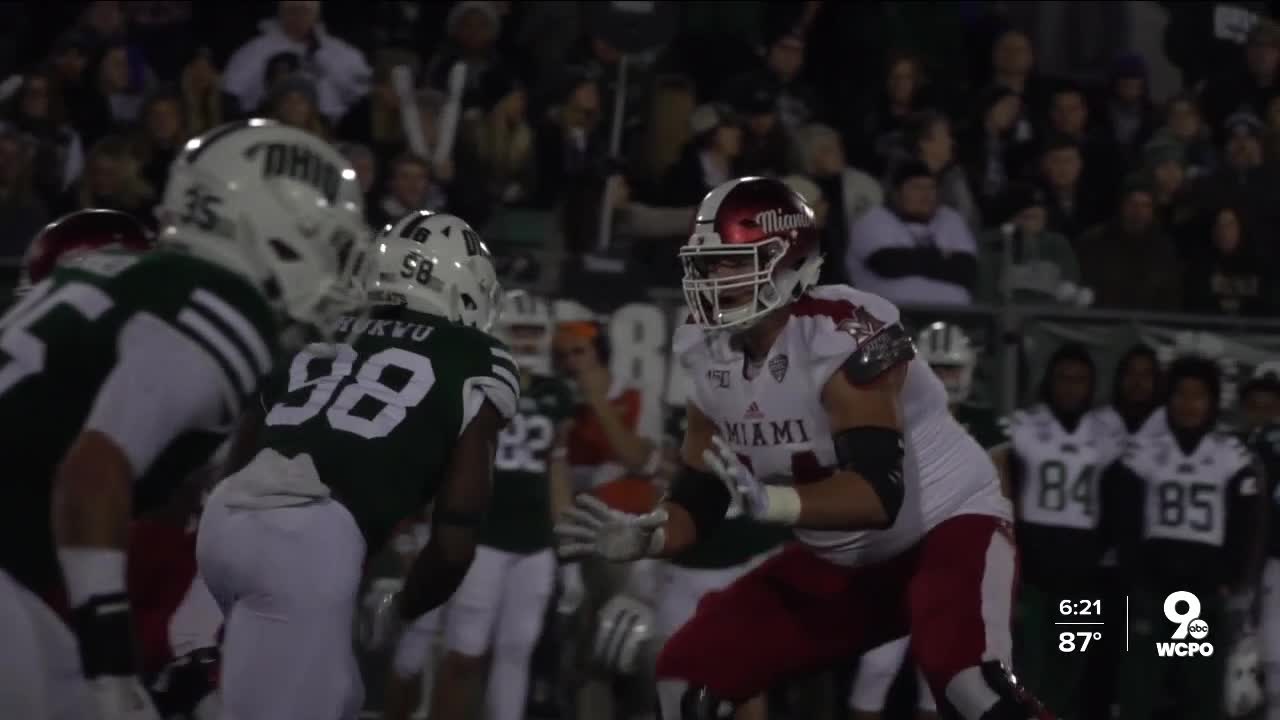 Tommy Doyle grew up on skates, with his sights set on the NHL. His new ambitions are just one letter off.

Tommy Doyle always had his sights on the NHL. He grew up sliding across the ice in hockey-crazed Edina, Minnesota, a town ESPN recently dubbed the “center of US hockey.”

He wanted to be an enforcer and use his size to intimidate the opposition.

“Hockey was the No. 1 thing for me,” the Miami senior left tackle said. “Seems like the first thing you learn how to do (in Edina) is skate.”

But Doyle had the ideal dimensions for a different sport.

He left his skates behind his sophomore year in high school and began playing football — first as a linebacker and then later as a defensive lineman.

“I wanted to play defensive end in college, but a lot of the feedback I was getting from coaches was that I was too slow off the ball,” Doyle said. “They weren’t buying into me as a defensive lineman. Started getting some offers for the offensive line. Didn’t blow up. I was a raw product.”

Redhawks offensive line coach George Barnett projected the prospect would excel once he flipped to the other side of the ball.

“He was 6-7, 240 when we started recruiting him,” Barnett said. “I don’t know much about hockey, but it had to be a good thing. Balance, physicality, competitive. I liked the defensive aspect. Anytime I can get an offensive lineman with defensive lineman film, it just shows me a bit about his tenacity, how he plays the game.”

Doyle didn’t play at all his freshman year in Oxford. He tore his labrum and had to red-shirt.

“The transition was hard. Switching positions was difficult at first,” Doyle said. “You can be more reckless on the defensive line, just play hard with your head down with some technique and you can still make plays.

“Offensive line is a lot of fundamentals, technique, more of a mental game. Had to stay balanced. Struggled with that when I was younger.”

He’s grown into the role now. Doyle is 6-8, 340 pounds and turning heads nationally. He was first-team All-MAC in 2019. The Outland Trophy (awarded to college football’s best lineman) has Doyle on its watchlist. And he picked up an unofficial honor earlier this July — an invite to the Offensive Lineman Masterminds summit. It’s a collection of 50-plus NFL offensive linemen with a select few college players there to learn the trade.

“There were about 10 to 12 college guys there,” Doyle said. “Did a ton of film study and broke out into groups. Coolest part was hearing from the veterans, some of their advice to us college guys there. Awesome experience.”

Even though Doyle was one of the tallest men at the Masterminds summit, he’s still growing into the position. He played left tackle for the first time last season.

“(Going to the summit) will only boost his confidence,” Barnett said. “He’s still just in year four of his development, which is scary because he’s a good player. Being around those guys and to come back home … I imagine his confidence, the pace in his walk, the pace in his drills will be higher. It will serve Tommy Doyle well.”

After a standout performance against AJ Epenesa last year (Epenesa went in the second round to the Buffalo Bills in 2020), Doyle will likely find himself shaking the hands with the commissioner at the draft this year. Not Gary Bettman in the NHL, but Roger Goodell of the NFL.

“I’m hoping not just to make it but to be successful in the NFL,” Doyle said.