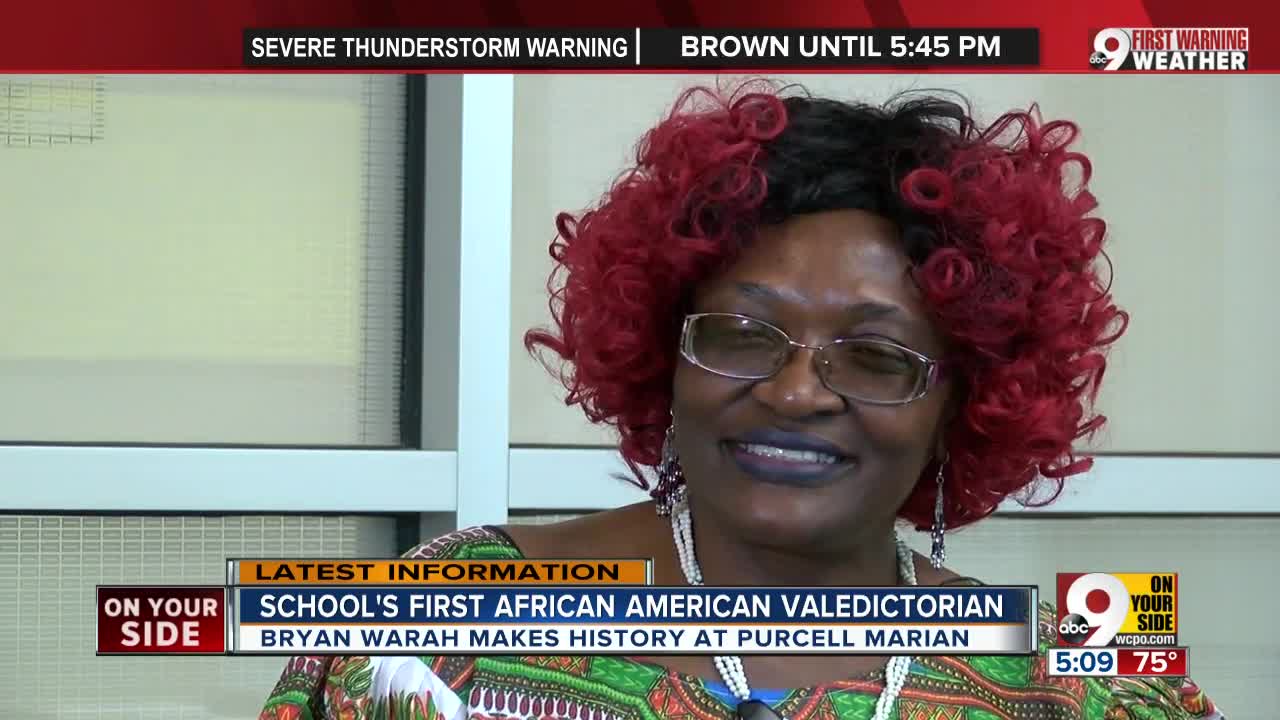 "We were just beaming with joy - for him to be the first black valedictorian," said Warah's grandmother, Geraldine Tumenta, who flew into town for the ceremony. 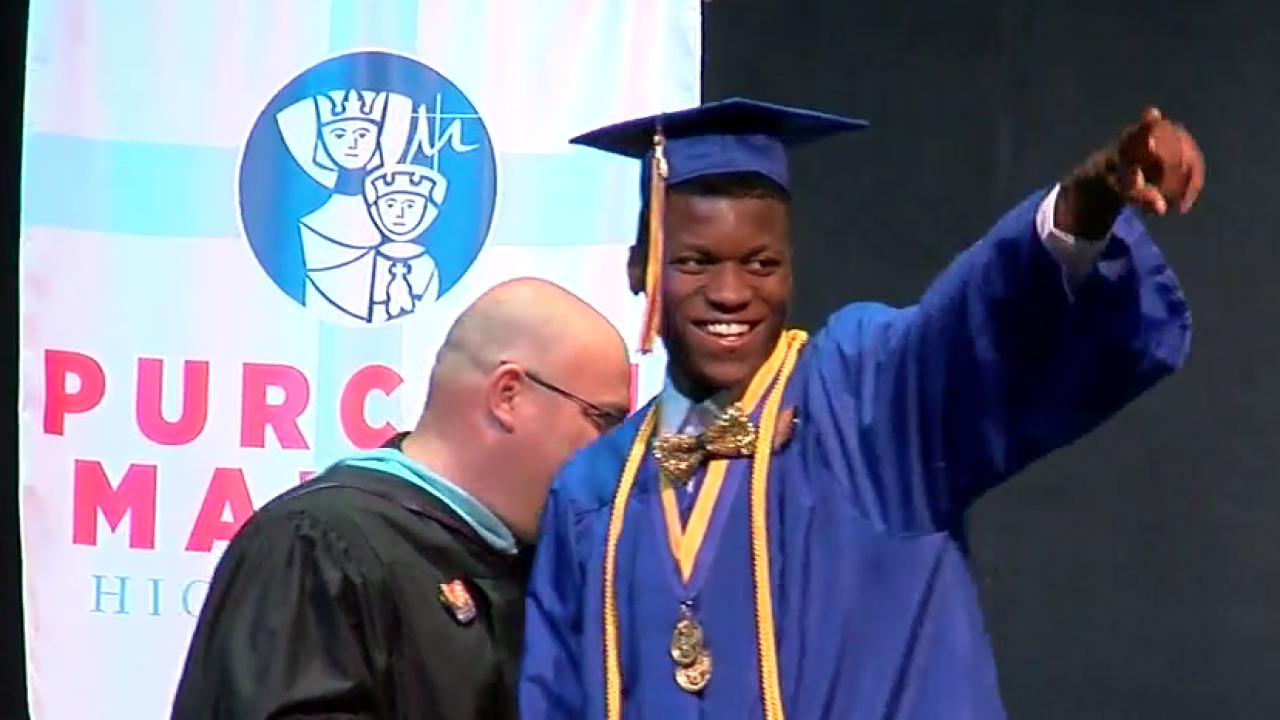 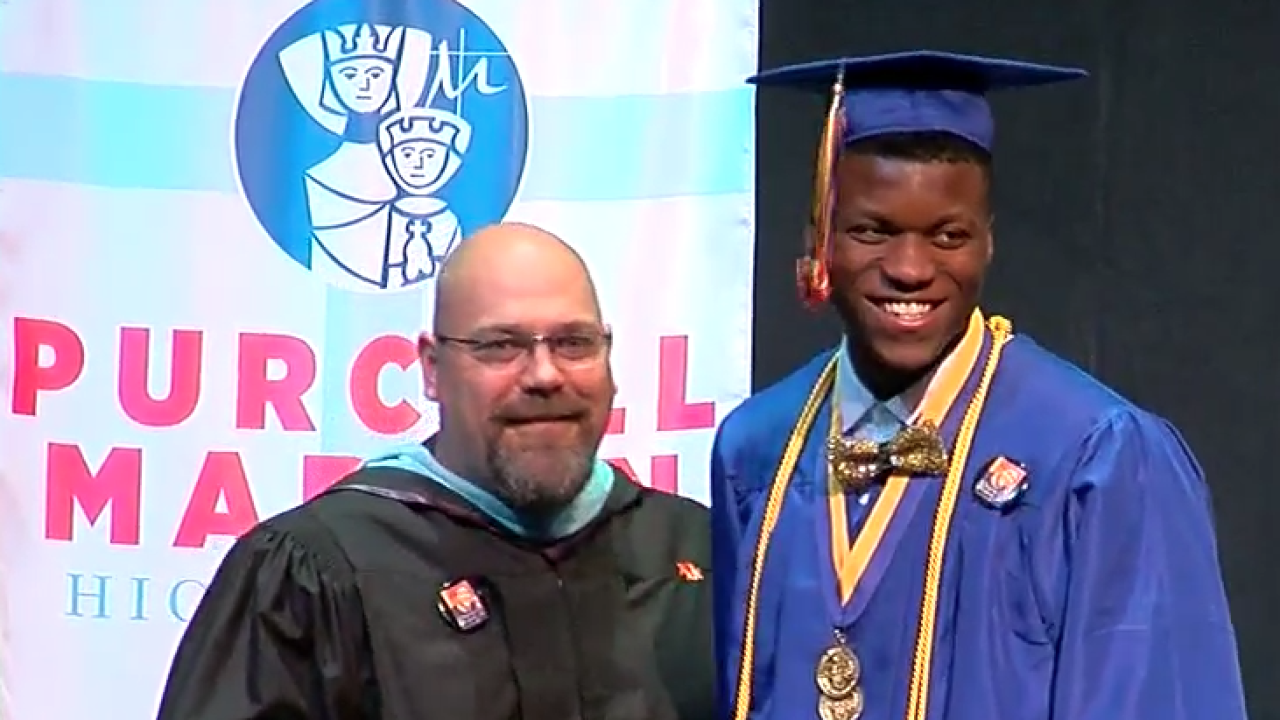 Bryan Warah made history in his blue cap and gown, taking the stage to cheers and applause as the first African American valedictorian since the school opened as Purcell High School in 1928.

The significance was not lost on Warah, his classmates or anyone in the audience.

"Means equality. That’s what it showcases — that there’s equality within the school,” Warah said. “Means hard work, determination. Also means that God’s watching over me and granted me that great blessing.”

"We were just beaming with joy — for him to be the first black valedictorian," said Warah's grandmother, Geraldine Tumenta, who flew into town for the ceremony.

Warah was first in his class with a 5.3 weighted grade point average. In addition, he played three sports – basketball, track and cross country - and was president of the honor society.

He dedicated his speech to those who helped him get there, including his family and his mentor and youth basketball coach, Ishaq Nadir.

“This is nothing that could’ve been written that I would be blessed to have a relationship with him and see him make history,” Nadir said proudly. “Proud at the highest level, especially because of his scholarship and the history he has established.”

Warah’s grandmother led the cheers with other family members.

“We were screaming for joy,” said Tumenta. “We are blessed because we never expected this, but he showed his zeal for everything he has done.”

Warah said he didn’t set out to be valedictorian four years ago.

“Freshman year I wasn’t focusing on becoming a valedictorian but on being the best student I could be, getting the best grades I could get,” he said.

“First two years it was a lot of trials and tribulations, triumphs … just a lot of negativity, but I used that to fuel me.”

And that fuel will take Warah to Malone University in Canton, Ohio, where he wants to keep playing basketball and pursue a career in orthopedic medicine.

And, no doubt, keep making his family and mentor proud.

“I cannot put it in words,” said his grandmother. “He has made us so proud with all his accomplishments. The family is so elated.”

And just like his high school diploma is forever, so is the history Warah made on the stage Wednesday night.

“We’re in the 400-year celebration of Africans being brought over here and being slaves,” Nadir said, “but now, from that test and experience, we’re coming to a celebration of having a young man who comes from African roots whose now making history here in America.”