As Xavier University grapples with connection to slavery, students work to reconcile past, present 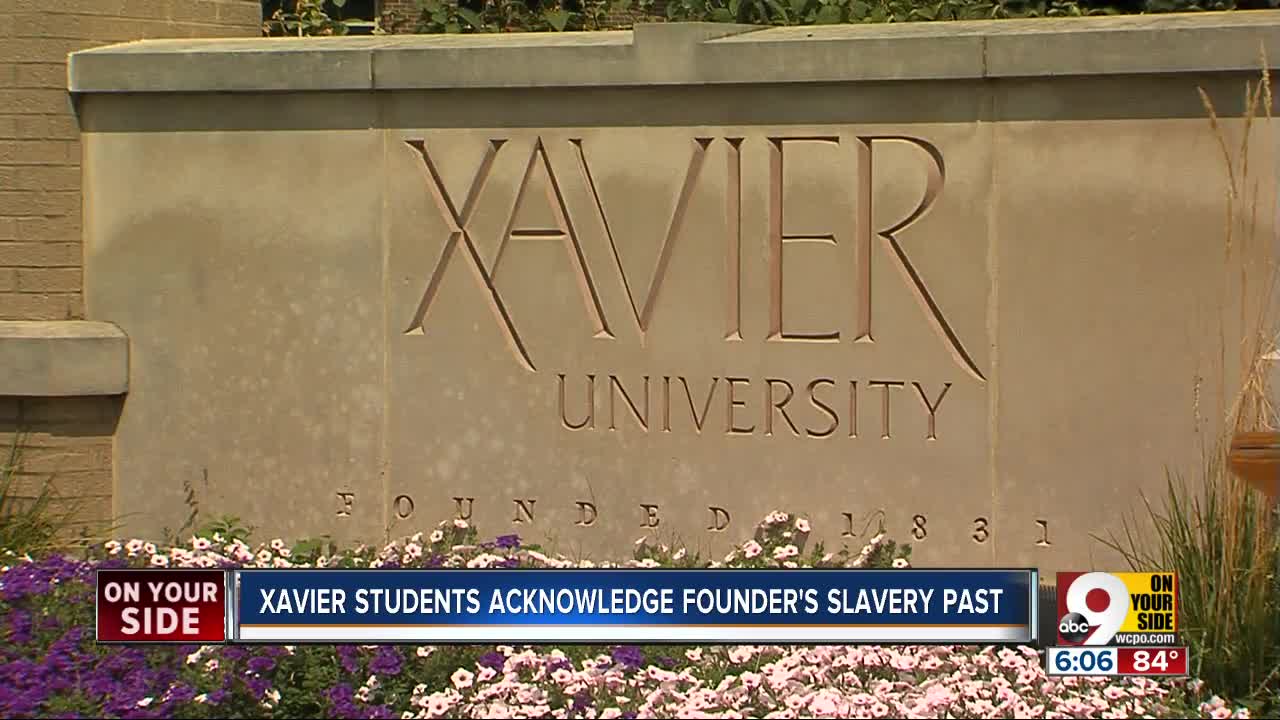 As Xavier University grapples with the discovery that their founder owned slaves, current leaders are working to reconcile the school's past with its present. 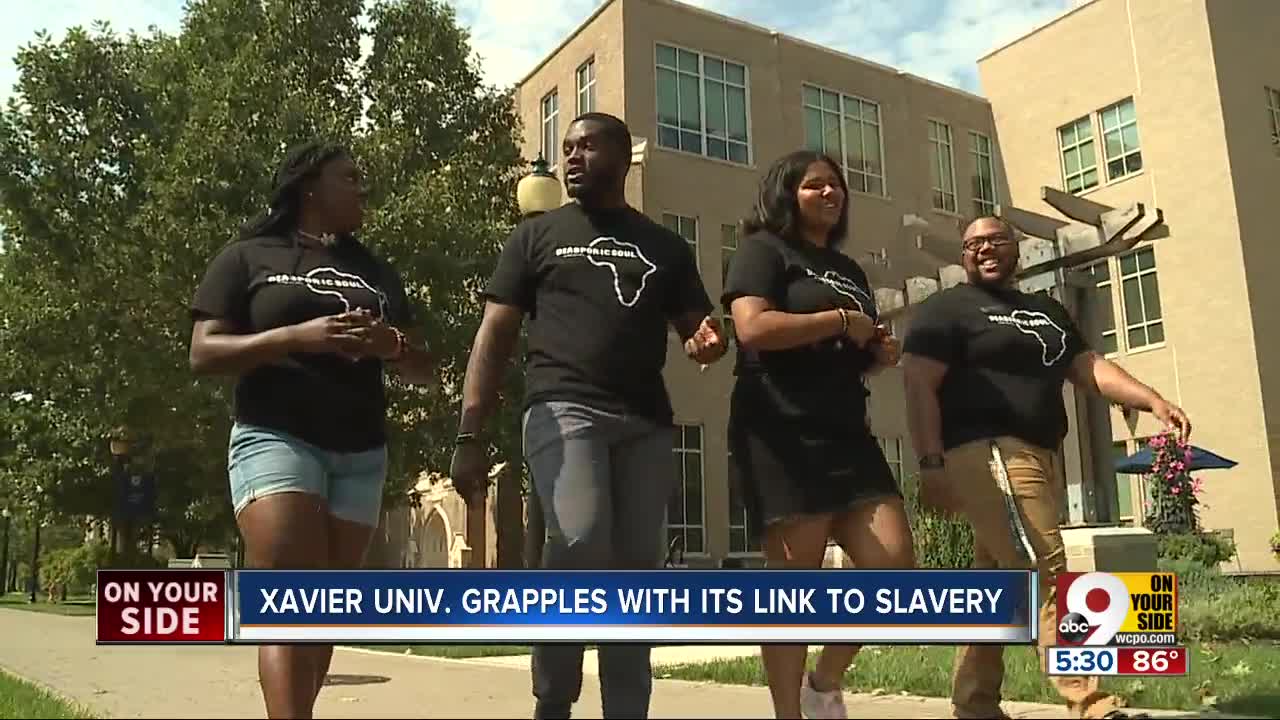 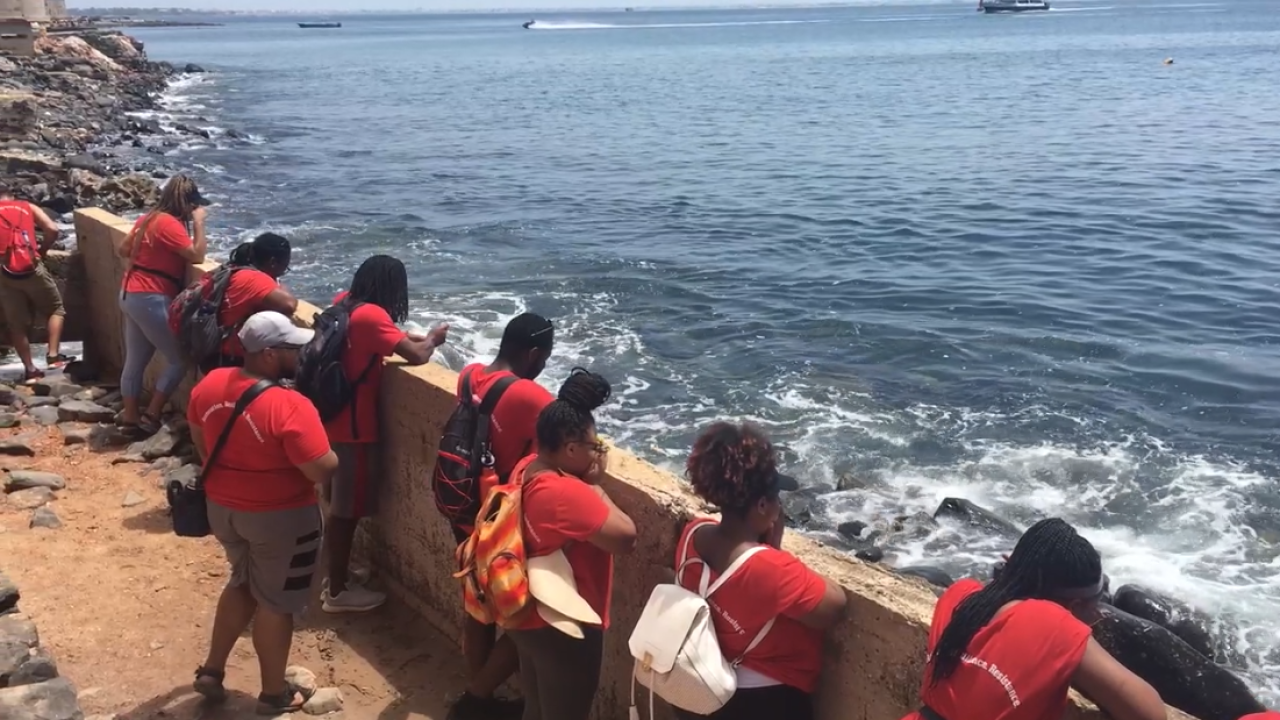 He is considered to be a pioneer in the expansion of Catholicism in Kentucky and Ohio. He was Cincinnati's first Bishop. He built Cincinnati's first cathedral. He also launched a college for boys called the Athenaeum, which became St. Xavier High School and Xavier University.

But there's something about him that's less well-known and that the current president is working to start conversation around, however difficult that conversation may be.

"It's too often the case I think that difficult elements of our past are kind of swept under the rug. Or, there are things we don't want to talk about," said Michael Graham, president of Xavier University. He became curious about Bishop Fenwick and Xavier's history following the revelation by Georgetown University in 2016 that it sold 272 slaves to pay off debt.

"I began wondering if we had any story in our background that was kind of like it," Graham said. "You know, if we had some kind of historical connection to slavery in some way, shape or form."

A church historian helped lead Graham to documents -- including letters and census records -- that confirmed his suspicions.

So Graham decided to start a conversation, rather than hide the university's connection to slavery. Thus began the Stained Glass Initiative, an effort to bring healing and reconciliation to the university. One piece of the initiative is an opportunity for African American students to spend two weeks in Senegal.

But amid a desire to heal, one thing still stands out: a residence and dining hall called Bishop Edward Fenwick Place.

This will be one topic of debate at a national symposium Xavier is hosting on campus Oct. 9-12 in conjunction with the University of Cincinnati, which also has a connection to slavery.

After the symposium, Graham said the university will likely make a decision about whether to rename the building that boasts a former slaveholder's moniker.

"For some, of course, it's no question. Change the name. Do it now. Do it yesterday," Graham said. "For others, it's well, you know, he has an important role to play and so changing the name would disregard or dishonor it."

Graham said he believes the decision about the name of Fenwick Place creates the opportunity for continuing discussion.

"It's a way for us to talk about a whole constellation of issues in a way that makes sense here at the university," Graham said. "And, that matters to us because of this building right in our midst."

But before Graham could help find a way for students to feel like they were moving forward, he had to take a look back.

"My first reaction was, everything has a connection to slavery because slavery was the kind of economic vehicle on which this country was built," Gollar said.

Gollar's research indicates Fenwick's ancestors were among the first Catholics to arrive in Maryland in the 1630s. Fenwick was born in Maryland in 1768. The family owned several dozen slaves, records show. He went to Europe for college when he was 16.

"He gave me some things to read, and we began talking, and that was when I became aware of the connection of Bishop Fenwick to slaveholding," Graham said.

Fenwick returned to Maryland in the early 1800s.

"That's when he came home and kind of took ownership of the property that his father (then deceased) had left him in southern Maryland," Gollar said. "And, that included some slaves."

"It's still down there," Gollar said. "It's called St. Rose, a beautiful piece of property. And, it was built by Fenwick slaves."

In a letter to another bishop in 1804, Fenwick wrote: "The first preparatory steps towards the execution of my plan are, I believe, as well as ensured: a house and land to inhabit, Negro slaves to cultivate (my own property) and some funds in the Bank of the United States, though I am yet ignorant of the value."

By 1821, Fenwick moved north to Cincinnati and was named bishop of the brand new Catholic diocese.

"He did not technically own slaves anymore. He still was very much kind of engaged in the business of slavery," Gollar said. He said friends and slave owners often sought advice from Fenwick on slave matters.

Fenwick went on to build a new cathedral in Cincinnati, and to start the Athenaeum school in 1831.

Fenwick's past ignited a discussion around the residence and dining hall name. "Bishop Edward Fenwick Place," was selected after a campus-wide voting contest in 2012.

"Had we been aware when we did that of the connection that we later learned of Fenwick to slavery, we might have re-thought that," Graham said.

Fenwick died in 1832, barely a year after the university opened.

But Xavier's connection to slavery did not end with Fenwick's death.

"When the first Jesuits came from St. Louis to Cincinnati to administer the school, they brought with them a kind of admissions financial strategy," Graham said. "An enrollment strategy that depends upon the sons of slaveholders from the south."

Graham said the tuition and fees from the boarding school students made up a large percentage of the school's overall income. A school roster book shows a number of students from areas like New Orleans, St. Louis and Nachez, Mississippi.

"It's a complex story," Gollar said. "There never were slaves on Xavier's campus. But, the results of their labor helped many students come to Xavier."

Graham's acknowledgment of Fenwick's past was a major topic on Xavier's campus after an email announcement to the university community in early 2017. Buzz continued after a university-wide conversation was held in spring of 2017.

"It was like, 'What? Are you being serious?'" said Jamie Carter, a senior at Xavier.

"I was concerned about what was the impact on students and their everyday experience, but also how were we being intentional about creating spaces for healing," said Kyra Shahid, PhD the director of Xavier's Center for Diversity and Inclusion. She is also heading the effort to bring conversation, healing and reconciliation to the campus through the Stained Glass Initiative.

She said it will be a way to "bring together multiple pieces of the story. Some of them that are very complicated and not necessarily meant to fit together. But, we bring those things together to create a mosaic that helps us to create something new."

One of the first pieces is the Diasporic Soul Racial Healing Experience. It allows African American students to spend two weeks in Senegal in West Africa.

Carter and Samiyah Jackson were two of 11 students to go on the trip earlier this summer.

"It showed me that I am beautiful in my skin. I'm worthy. I have a voice," said Jackson, a sophomore biomedical sciences major and wants to become a cardio thoracic surgeon. "I was taught that I can become a surgeon, but also I can become a civil rights activist."

Shahid said the intent of the trip is to give students a safe space to discover their history.

One moment the students will likely never forget is their visit to Goree Island.

Adrian T. Parker, 23, is a Xavier graduate and assistant to Shahid. He said the island is the most emotional part of the trip because it's believed to be the location from which African slaves were transported during the transatlantic slave trade.

The emotional experience showed the students what it might have been like to be enslaved during the slave trade -- the students paused at a wall along the island to toss personal items into the ocean in memory of their ancestors.

"No one could stop crying," Parker said.