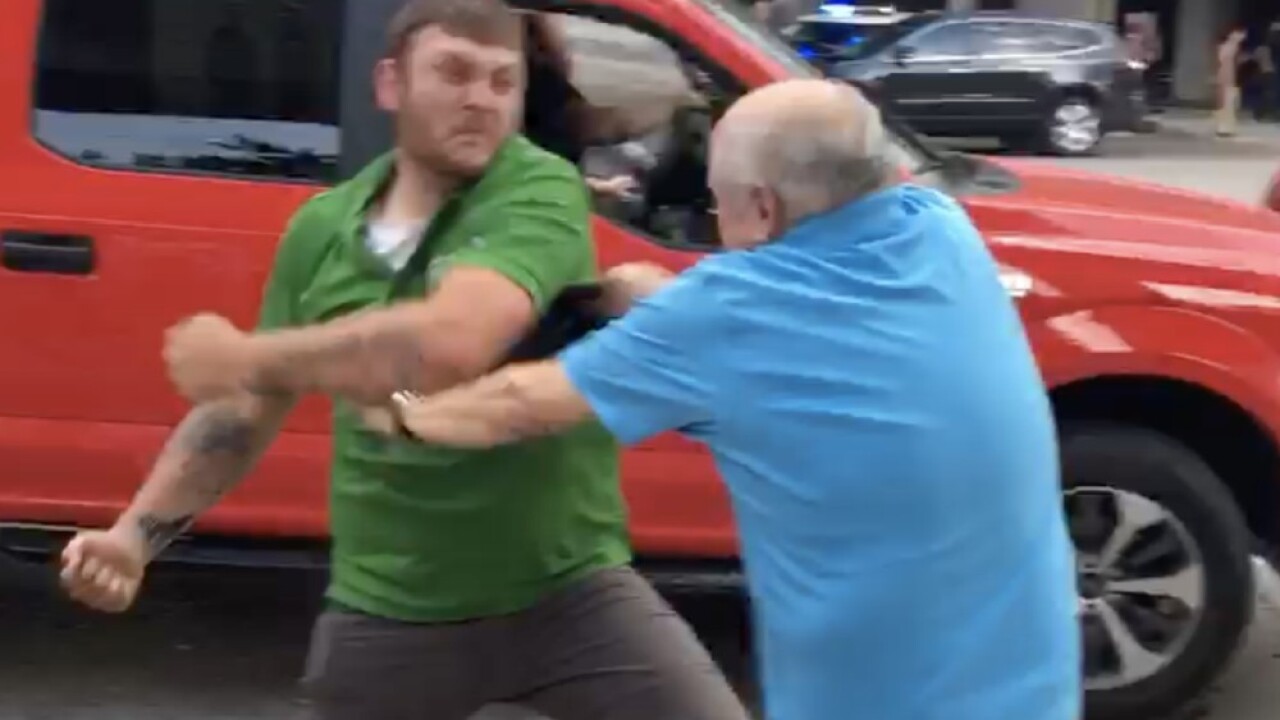 Dallas Frazier punches Mike Alter outside a rally for President Donald Trump in Cincinnati on Aug. 1, 2019. 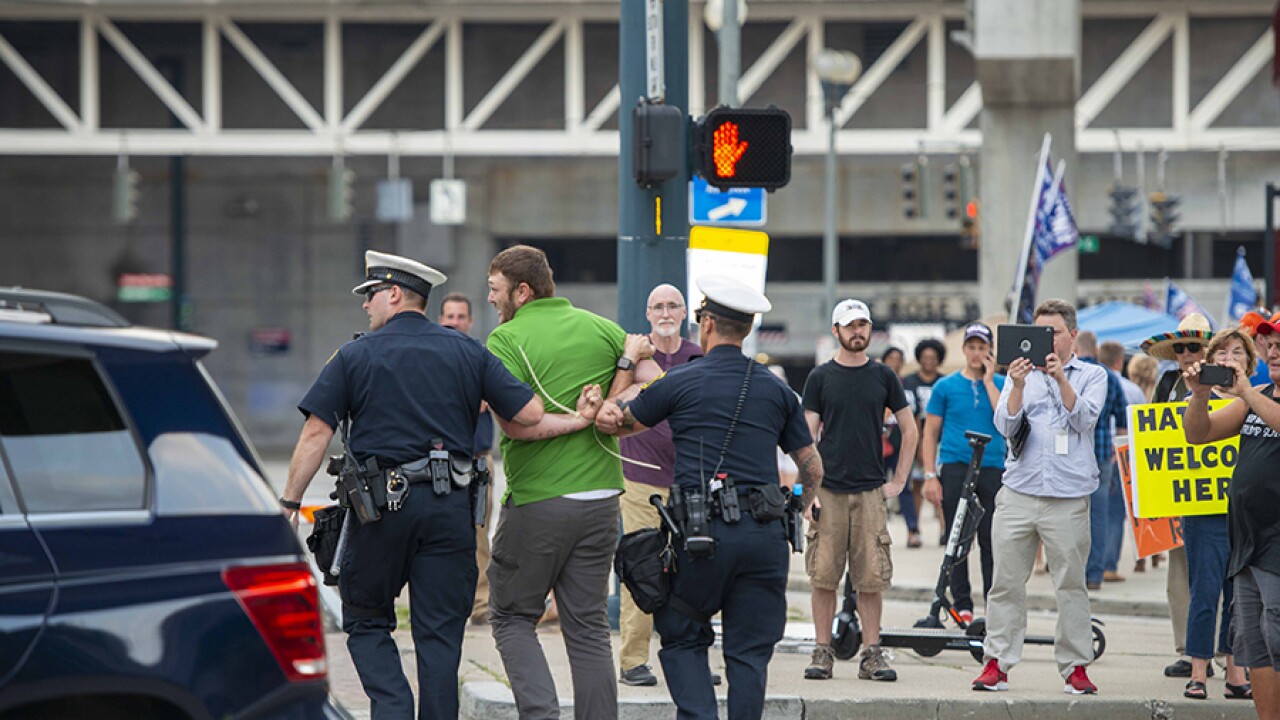 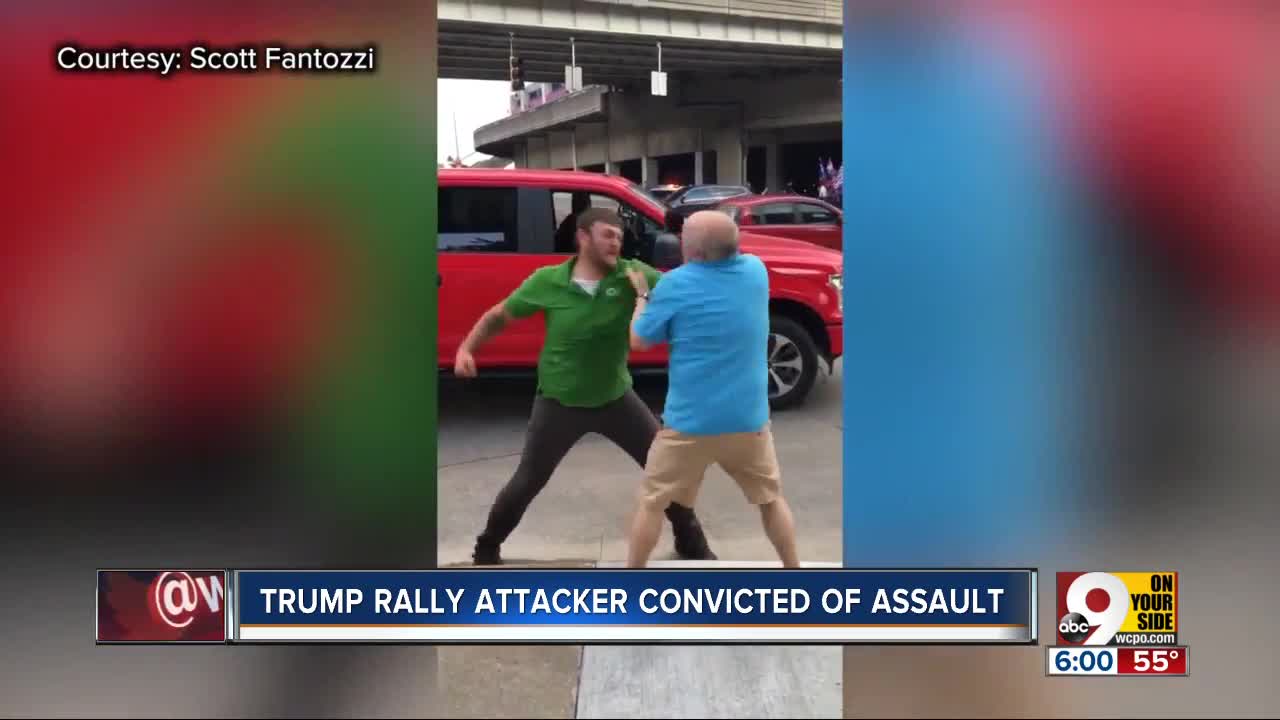 CINCINNATI — The man who jumped out of a truck outside a President Trump campaign rally Downtown last summer and punched an anti-Trump protester multiple times will serve four months behind bars and pay his victim about $900 in restitution.

The assault case against 30-year-old Dallas Frazier centered on a video of him repeatedly punching 61-year-old Mike Alter in the head. The jury watched the video and took about an hour and a half to reach a guilty verdict, and Judge Brad Greenburg sentenced Frazier to 120 days in prison Friday.

"Justice was served," Alter said after court Thursday, adding that he wants Frazier to do jail time.

Frazier faces up to 180 days in jail on the assault conviction.

In an interview, Alter criticized Frazier for comments he made in jail about the attack.

"This whole time it’s like he really didn’t care," Alter said. "You could tell by some of the things he said from the jail ... it’s like it didn’t matter to him what he did wrong.”

Recorded phone conversations from jail indicated Frazier knew what he was doing when he assaulted Alter, Prosecutor John Vogt told the jury.

“In those Justice Center calls you heard, Mr. Frazier asks a lot of questions like, ‘Did I look good?’ And I think the answer is clearly no,” Vogt said.

"'I wanted to knock him out so badly. I couldn’t believe he didn’t go to sleep.'

"'He must’ve had a good chin because I thought I was hitting him good.'

"He knew what he was doing,” Vogt said.

Police said Frazier, then 29, of Georgetown, Kentucky, jumped out of a red pickup truck driven by his brother and attacked Alter on the sidewalk on Broadway outside of U.S. Bank Arena (since renamed Heritage Bank Center) on Aug. 1.

“This red truck pulls up and again it’s just bantering back and forth,” Alter testified. “Next thing I know, the door opens, Mr. Frazier jumps out and just comes at me and all of a sudden wants to attack me."

Prosecutor: “Mike, how many times did you punch back?”

Alter: “I didn’t punch back any times.”

“I’m just back on the curb in disbelief," Alter said. "I’ve just been pummeled in the face and the head four times. I’m just kind of like, 'Whoa,' in disbelief, like 'Did this really happen?'”

While the defense claimed it was disorderly conduct, the prosecutor said “this was not just a fight," saying Frazier and his brother were driving around multiple times “looking for trouble” and that Alter did not instigate it.

Defense attorney Sam Heller claimed Alter did instigate the fight by calling Frazier vulgar names and taunting him, saying he wouldn’t get out of truck. Heller also said Alter took off his hat first and made a “come on” gesture to Frazier and that Alter took a step toward Frazier, not away, making it a "mutual fight."

But Dathan Brewer, a witness who pushed Frazier away from Alter after Frazier threw several punches, disputed that.

“In my mind, the gentleman that was throwing the punches was the aggressor and the gentleman being punched wasn’t really trying to fight anybody. Therefore I stepped in,” Brewer said.

The brief incident was recorded and posted to Facebook by another protester, Scott Fantozzi. On the video, you can hear protesters chanting “Lock him up!” when police handcuffed Frazier and took him away.

"I didn’t go down, for what that’s worth,” Alter said at the time.

Frazier declined to comment to WCPO after the verdict. Judge Brad Greenberg requested a victim's impact statement and set sentencing for Jan. 17. Frazier is currently out on bond under electronic monitoring.