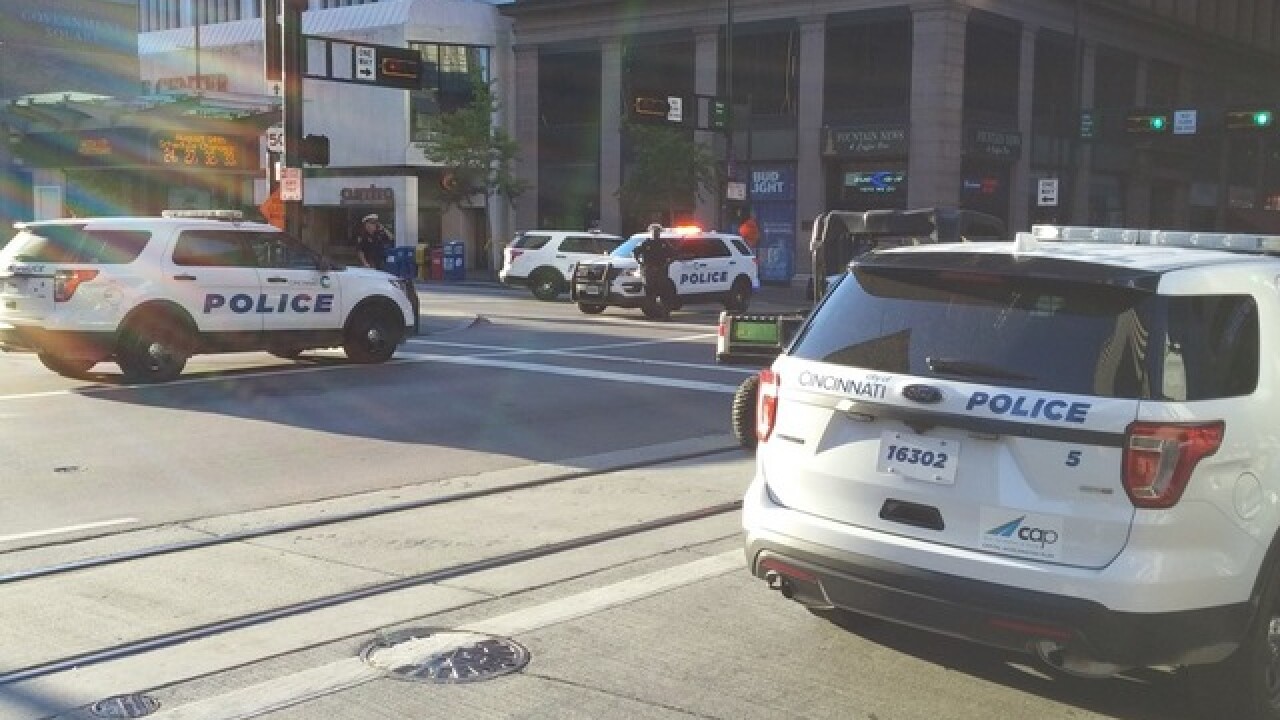 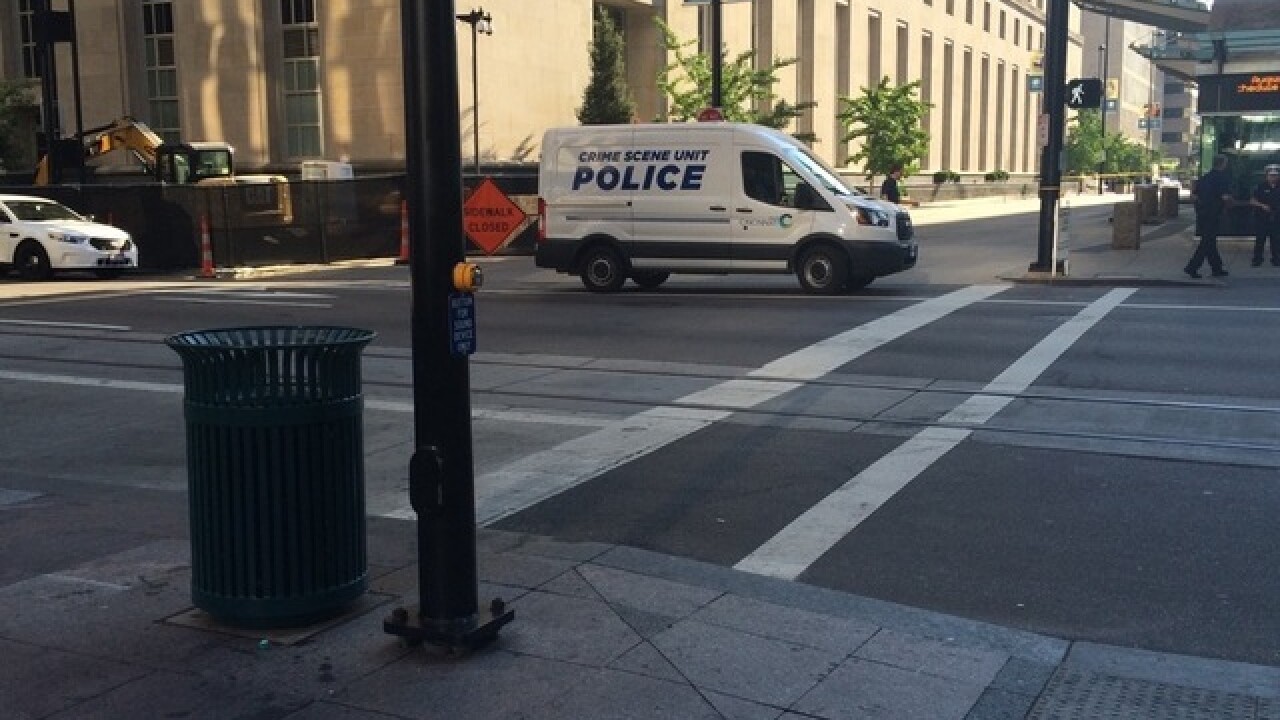 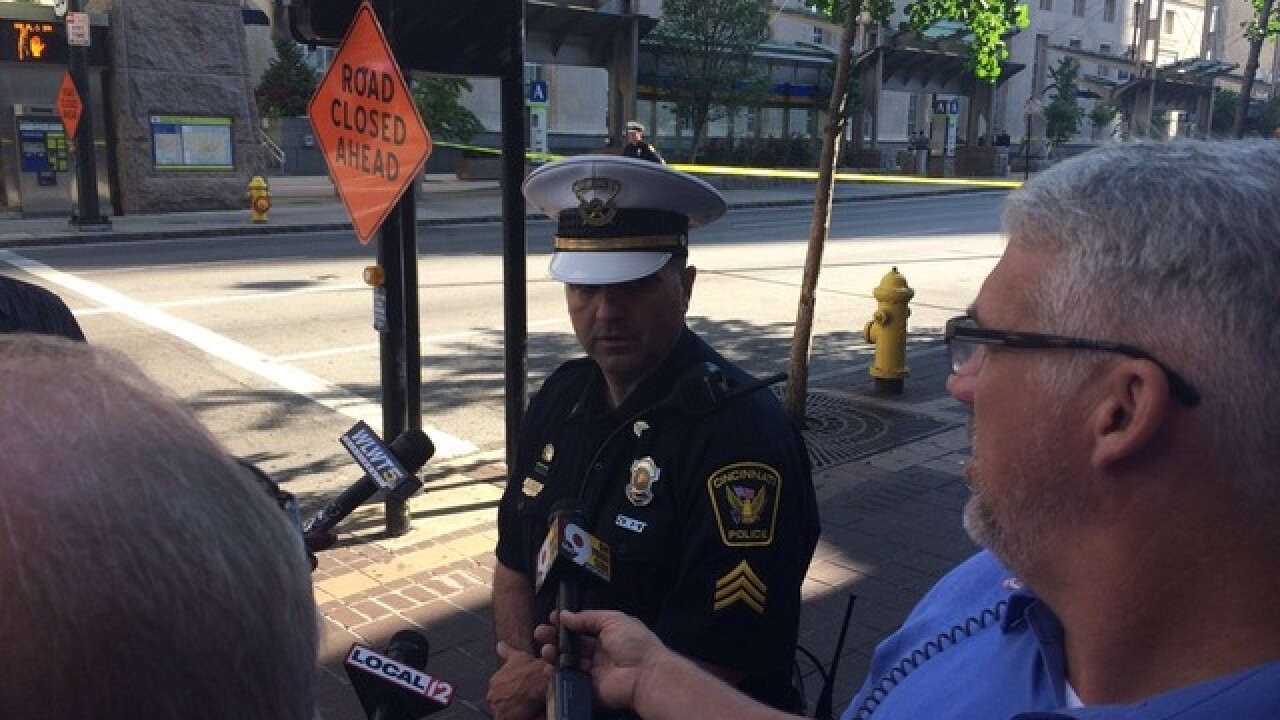 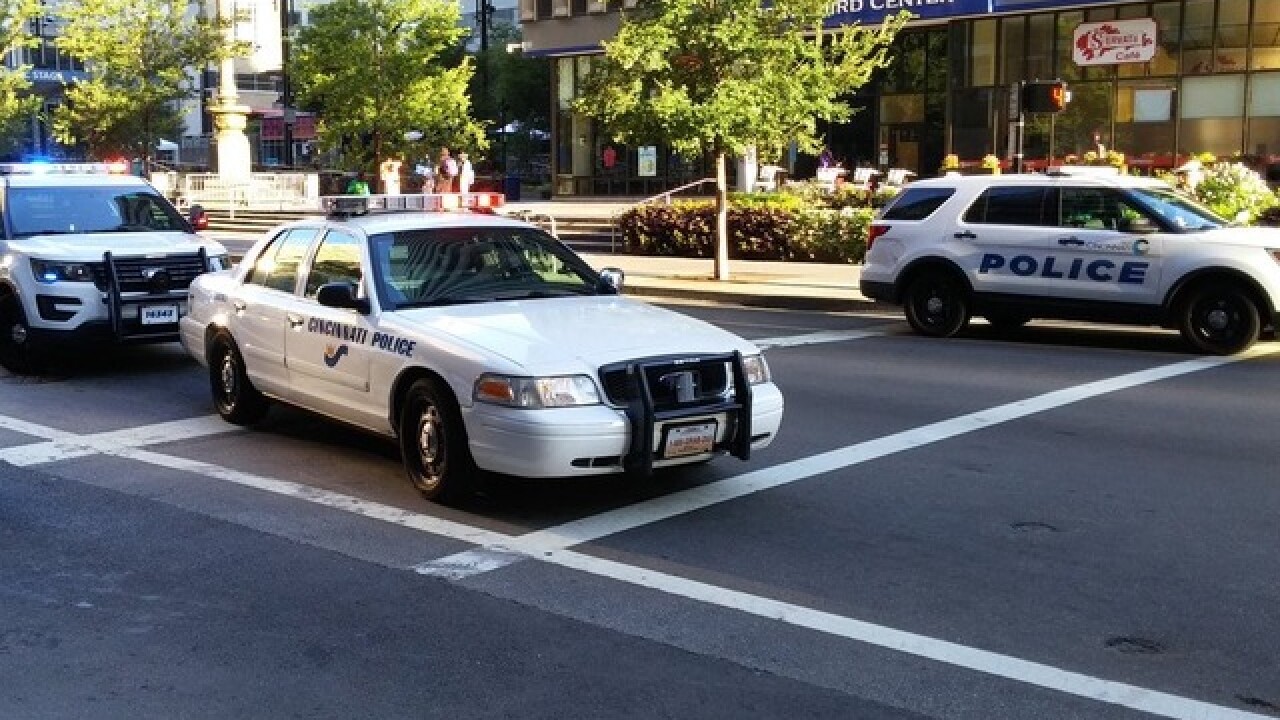 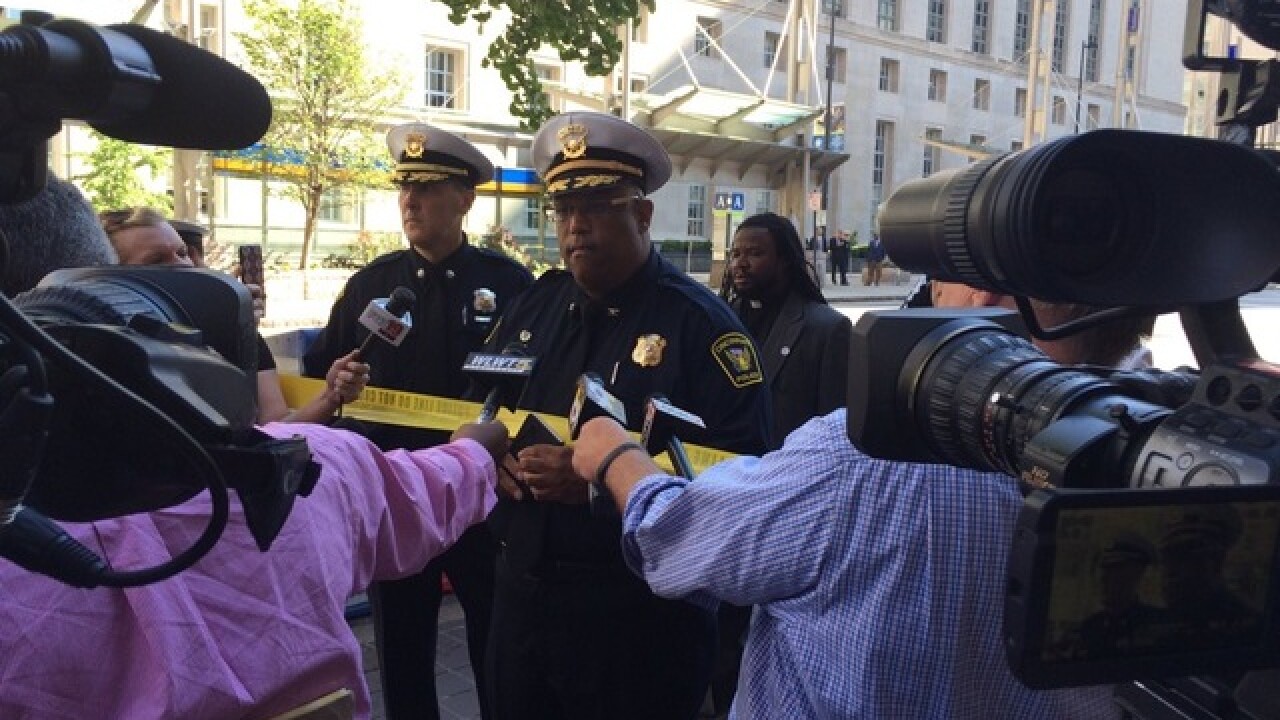 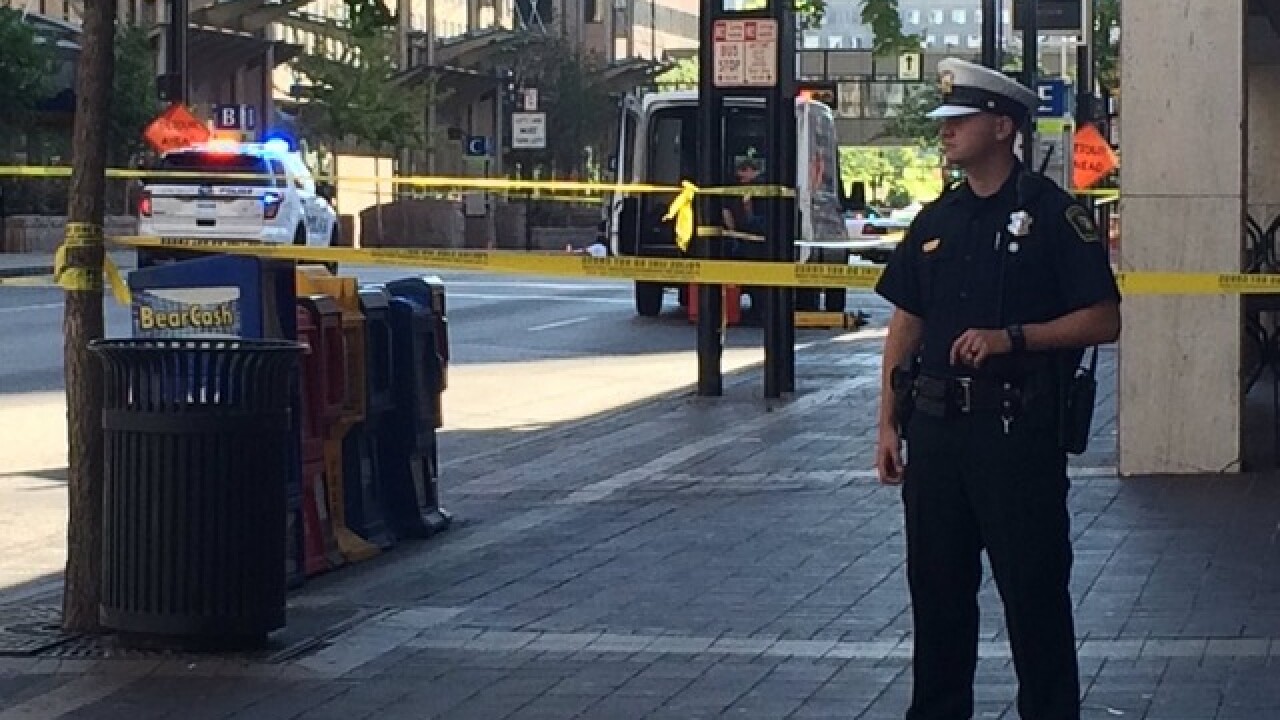 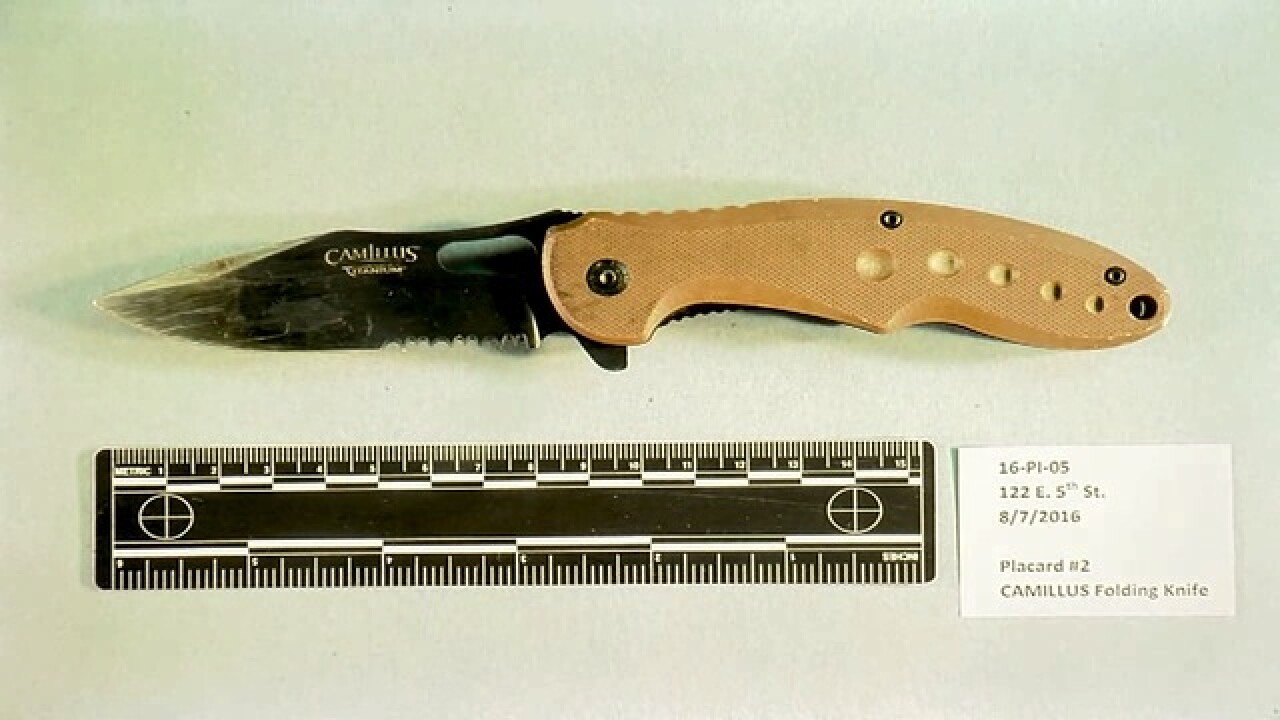 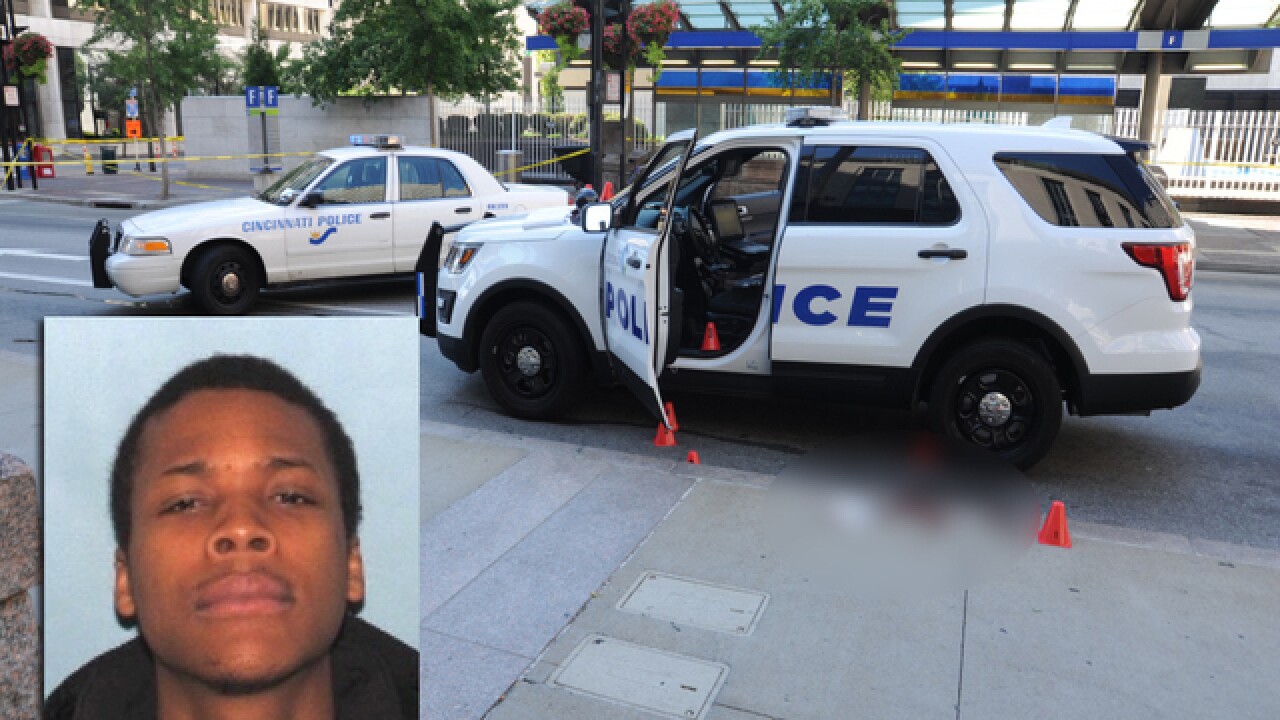 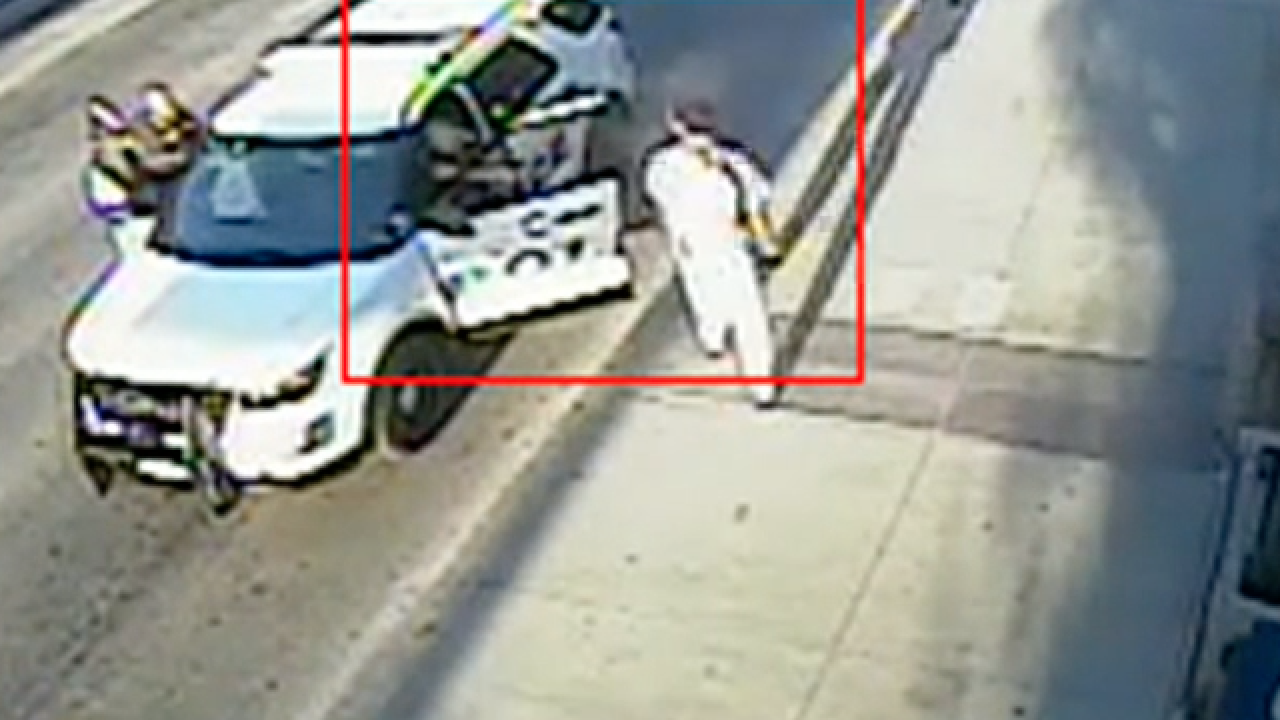 >> See the entire video of the fatal confrontation in the media player above.

CINCINNATI -- A veteran Cincinnati police officer shot and killed a knife-wielding robbery suspect who rushed the officer and attacked him before he could even get out of his police vehicle Sunday morning, Cincinnati Police Chief Eliot Isaac said.

Jawari Porter, 25, was pronounced dead at the scene on Fifth Street near Government Square.

"This was a vicious, violent attack on the officer," Isaac said at a news conference Monday.

The chief said video footage captured key moments from Sunday morning -- including Porter's robbery of a Kroger store in Over-the-Rhine and his attack on Officer Anthony Brucato:

In a statement Monday afternoon, Deters said he found Brucato was justified in shooting Porter and cleared the police department to release video footage.

It's long been part of Cincinnati Police Department procedure to share video from police shootings within 24 hours.

Sunday was the fourth time a Cincinnati police officer has shot and killed a suspect this year; one of those cases involved an off-duty officer working a private security detail. The police department quickly released video footage in each of the other three cases.

Brucato, a 25-year veteran, was riding with Officer Patrick Galligan, a 29-year veteran, during their shift for Cincinnati Police District One on Sunday morning.

At about 7:20 a.m., the pair responded to a robbery call from the Vine Street Kroger store in Over-the-Rhine.

Watch the Kroger video below:

The officers headed south into the Central Business District, in the direction Porter was last seen going.

When Brucato and Galligan stopped, Porter rushed the vehicle and tried to stab Brucato as he opened his driver's-side door, Isaac said.

Brucato drew his weapon and shot Porter several times. Galligan did not fire his weapon.

Video from Libby Freeborn, a witness, showed what appears to be Porter covered with a sheet:

"He was breathing when we were there," Freeborn told WCPO.

Personnel from the Cincinnati Fire Department pronounced Porter dead. Neither officer was seriously injured, though Deters said Brucato had an abrasion to his forearm.

"All loss of human life is tragic, and we send our prayers to the families of the man that was killed," Mayor John Cranley said. "But it's also important to recognize...that we could have been in a situation where an officer was killed."

Video footage will show Brucato defended himself "as he was professionally trained to do," Cranley said.

Government Square and Fifth Street were closed for several hours while police investigated.

Nearby surveillance cameras captured the attack, but the chief said Deters' subpoena meant he couldn't release it Monday morning.

"This incident has been captured from multiple sources, and our commitment to transparency has always been to present that information in a timely fashion as possible," Isaac said. "This incident -- from the beginning of his actions at the Kroger grocery store all the way to this individual's actions involving the police officers that resulted in the officer-involved shooting -- was captured on video. However, I am prevented from presenting that today because this morning, I was presented a subpoena from the Hamilton County prosecutor preventing me from sharing that video. So what you're going to see is somewhat limited."

Isaac said the police department would release the footage as soon as a court allows.

"The chief has told you and the video will ultimately show you that this man tried to kill a Cincinnati police officer -- viciously, as the chief just stated," Cranley said.

Cranley, like Isaac, said he would have preferred to share the video footage Monday morning. Community and elected leaders say rapidly sharing information after deadly shootings -- a major reform enacted as part of the city's Collaborative  Agreement -- is crucial to building trust between the police department and the community it serves.

By Monday afternoon, Deters had cleared the police department to share the footage.

The Cincinnati Police Department's policy is to place any officer involved in a shooting on administrative leave for seven days.

Because Deters found Brucato was justified in shooting Porter, he said he would not refer the case to a grand jury.

At the scene Sunday morning, Sgt. Dan Hils, president of the Fraternal Order of Police in Cincinnati, sought to address community concerns about the shooting, saying no officer ever wants to initially harm or kill someone.

Pastor Peterson Mingo urged people "don't rush to judgment, wait until all the facts are in.

"I can understand the frustration of the people. It frustrates me also," Mingo said as a group of onlookers gathered. "But what we have to do is maintain our minds and our sense of reason. We don't need 300 people running through the streets rioting."

Other officer-involved shootings this year

There have been three other fatal shootings involving Cincinnati police officers in 2016.

On Jan. 11, Officers Andrea Harmon and Kevin Manz shot an armed robbery suspect, Robert Tenbrink, in West Price Hill when he failed to comply with their commands and pointed an object, later determined to be a BB gun, at the officers, police said.

On Feb. 17, three officers fired nine rounds into Paul Gaston, 37, after he ignored commands to lie flat on the ground and instead raised up, appearing to retrieve a firearm from his waistband, Isaac said. The gun was an Airsoft pistol, which he called "a very realistic-looking firearm." The three officers who fired shots were Eric Kohler, Scott McManis and Zachary Sterling.

On May 25, an off-duty officer shot and killed Terry Frost III, 20, during an attempted robbery at the Fifth Third Bank in Madisonville, police said. Frost entered the bank wearing a mask and hood, as well as a plastic grocery bag over his hand, Isaac said. Frost vaulted over the counter, and Officer Kevin Hankerson, who was working a security detail for the bank, drew his gun. Frost pointed his covered hand at Hankerson, who pushed a teller out of the way and fired twice as Frost leaped back over the counter and ran out the door, Isaac said.