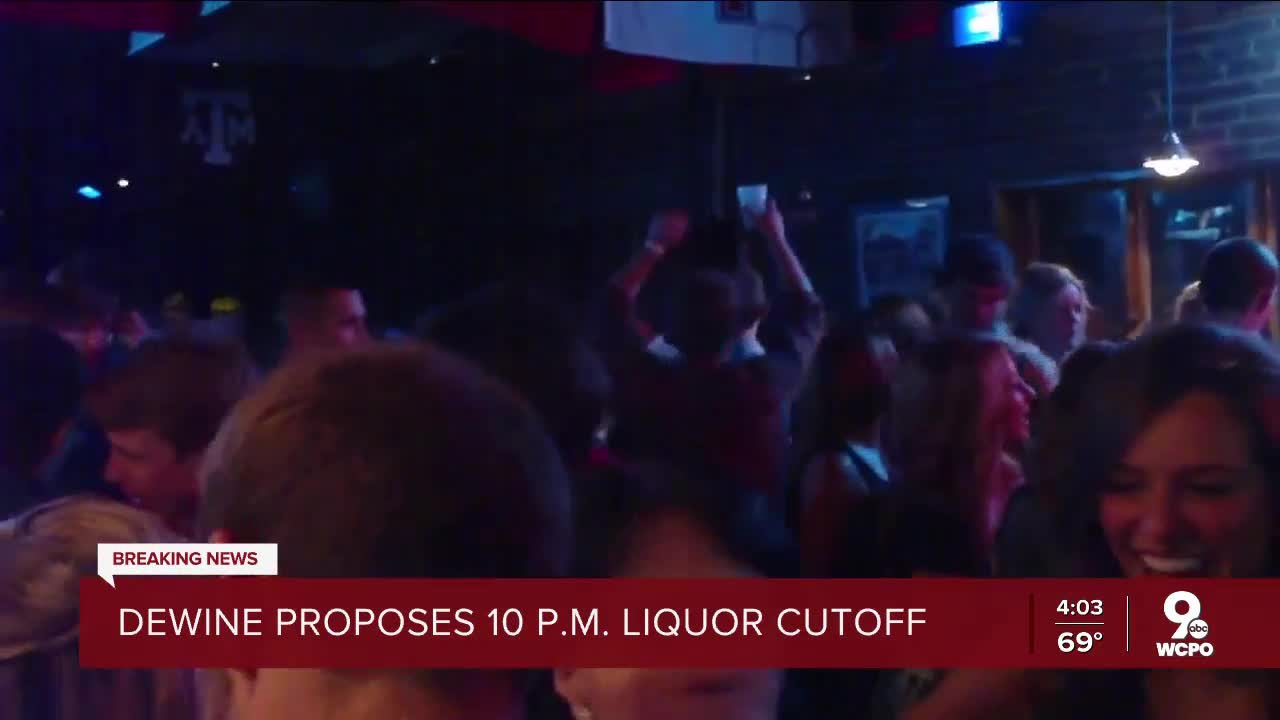 Ohio Gov. Mike DeWine has asked the state's liquor control board to consider an emergency rule that would limit bars' and restaurants' ability to sell alcohol, he announced Thursday afternoon during a news conference.

Ohio Gov. Mike DeWine on Thursday reported his state's highest number of daily COVID-19 diagnoses, defended his choice to push for the reevaluation of hydroxychloroquine as a treatment and called for new restrictions on some alcohol sales in an attempt to drive the spread of the virus back down.

His proposed rule, which the state liquor board will consider Friday in an emergency 9 a.m. meeting., would end all restaurant, bar and night club liquor sales every day at 10 p.m. Customers who purchased alcohol before that time would be required to finish it by 11 p.m.

DeWine argued that some of the conditions that spread COVID-19 are endemic to these settings — particularly bars, where high levels of traffic create proximity and where patrons often move from bar to bar during a night out. He said that although most bar and restaurant owners have obeyed social distancing and hygiene guidelines, investigators have observed some establishments with tightly-packed outdoor crowds and "shoulder-to-shoulder" patrons on dance floors.

Across the river in Kentucky, his counterpart, Gov. Andy Beshear, has ordered a two-week shutdown for all bars to prevent the spread of the virus. They will reopen in August with new, stricter guidelines from state health agencies.

"We do not want to shut down Ohio bars and restaurants," DeWine said. "That would be devastating to them. But we do have to take some action and see what kind of results we get from that action."

The Ohio Department of Health reported 1,733 new cases of COVID-19 on Thursday, again breaking the record for the state's highest daily diagnosis total.

The health department also updated its statewide heat map, which color-codes each county yellow (least risk), orange, red or purple (most risk) depending on the prevalence of COVID-19 inside. The newest map has fewer red counties than the one unveiled the week before, but also far fewer yellow. About 44% of Ohioans now live in counties colored orange, a level at which they are encouraged to "exercise (a) high degree of caution."

"Candidly, in the rural parts of Ohio, the mask-wearing is much, much less than it is in the urban areas," DeWine said of the yellow counties that had become orange since the last update. "That is one of the reasons you are seeing the spread."

Another 44% of Ohioans still live in red counties, where health officials recommend they "limit activities as much as possible" due to the high level of viral spread there.

Although Clermont County was downgraded to orange on Thursday, Hamilton County remained red. DeWine said many urban areas in the state, including Hamilton County, have exhibited encouraging signs of curbing the virus since he enacted the first mandatory masking orders, but they stay at the red level because they have an incidence rate of more than 100 COVID-19 cases per 100,000 people.

Addressing his successful push for the Ohio's pharmacy board to reverse its ban on prescribing hydroxychloroquine to treat the virus, DeWine said he did not have enough expertise to develop an informed opinion on its efficacy but believed the initial rule had been enacted without following procedure.

Most scientific studies have found the drug, normally prescribed for malaria, lupus and arthritis, has no or minimal effect on COVID-19 cases. Dr. Anthony Fauci, one of the White House's most visible health experts, has said evidence does not support its use in combating the virus.

However, hydroxychloroquine also has numerous high-profile proponents, including President Donald Trump. The president's repeated insistence that the drug works has kept discussion and public demand circulating despite the lack of scientific evidence supporting the claim.