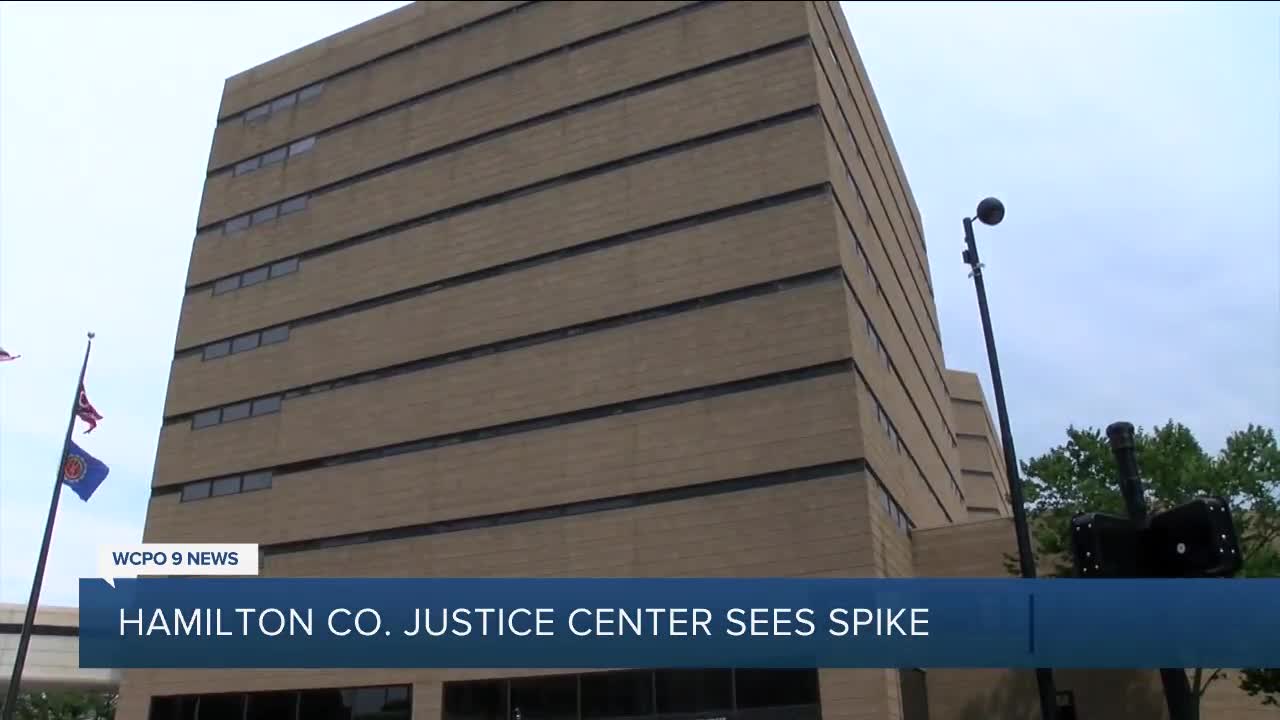 Officials with the Hamilton County Sheriff's Office said Thursday morning that they have seen a rise in the number of inmates who have tested positive for COVID-19, and two of the people who tested positive were released from the jail.

CINCINNATI — Officials with the Hamilton County Sheriff's Office said Thursday morning that they have seen a rise in the number of inmates who have tested positive for COVID-19, and two of the people who tested positive were released from the jail.

Dave Daugherty with the sheriff's office said NaphCare, the medical provider for inmates in the Hamilton County Justice Center, reported a total of 23 inmates tested positive with COVID-19 since June 20. Two of the inmates were released from custody as of Wednesday, leaving 21 positive cases within the jail.

"NaphCare and the Hamilton County Sheriff’s Office (HCSO) are following all guidance from the CDC," a statement from NaphCare reads. "All COVID-positive patients are isolated from the general population in the jail. Any patients who may have been exposed are in group quarantine."

NaphCare also said that seven people who tested positive were asymptomatic and never developed any symptoms.

But assurances about the quarantine process inside the jail haven't eased the fears Mary Stewart has for her son, who is an inmate at the Justice Center.

“When I go to bed every night, I pray to God that he doesn’t get it,” Stewart said. "If something was to happen to him, I don’t know what I would do.”

She said her son told her that inmates who have tested positive for COVID-19 are staying in the name area as those who are negative, despite the statement from NaphCare.

Daugherty said that is not the case.

Stewart has other concerns as well. She said the mother of another inmate told her some nurses and guards are not wearing masks.

Daugherty said it is protocol for everyone at the jail, even inmates, to wear masks.

“It’s a jail. It’s difficult," Daugherty said. "It’s similar to a nursing home. There’s only so much space in the jail. All we can do is try to keep people safe with the precautions we have.”

Another precaution the Justice Center is taking is to quarantine any newly booked inmates for at least five days for while they are monitored for symptoms.

"Any individual reporting possible COVID contact or exposure is isolated for 14 days and tested if symptomatic," NaphCare said.

Since the start of the pandemic, the Hamilton County Sheriff's Office has attempted to release at-risk inmates to stop the spread of COVID-19.

The average number of people being held in the Justice Center has since fallen from about 1,500 to about 1,100.