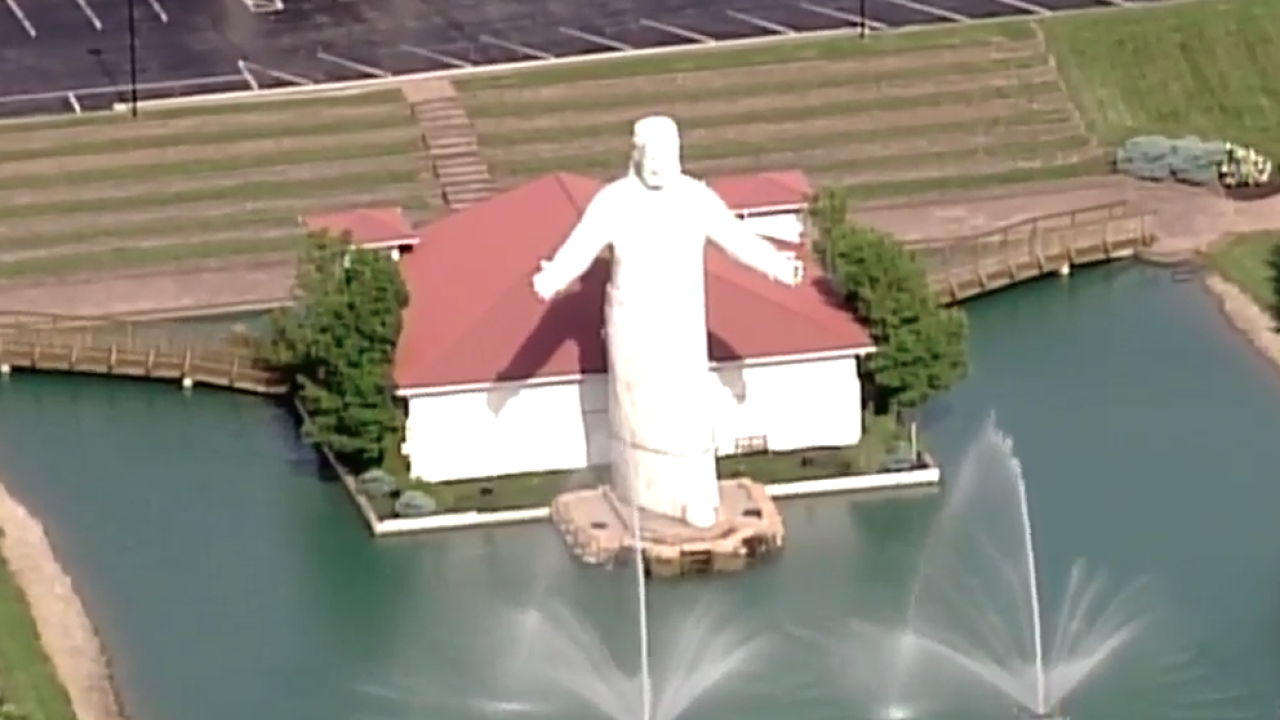 Copyright 2019 Scripps Media, Inc. All rights reserved. This material may not be published, broadcast, rewritten, or redistributed.
Chopper 9 WCPO
Hug_Me_Jesus_statue_at_Solid_Rock_Church

TURTLECREEK TWP. OHIO — While other congregations across Ohio are encouraging their worshipers to stay home and worship online to prevent the spread of the coronavirus, Solid Rock Church held in-person services Sunday morning and evening in Warren County.

“We are open!” the church posted this morning via Facebook, publicizing its 10:30 a.m. and 7 p.m. services. “Thankful the governor hasn’t placed restrictions on churches. Join us today! If you can’t make it or aren’t feeling well, watch us online at www.solidrockchurch.org.”

The Rev. Lawrence Bishop, Solid Rock Church’s pastor, said during a live stream of the 10:30 a.m. service that those concerned with the public’s health would be better served protesting outside Planned Parenthood locations instead.

While the church’s pews were not filled to capacity for either Sunday service, the live stream showed the church’s choir and congregants standing next to one another and those delivering remarks appeared to share microphones.

Congregants and leaders prayed together, heads inclined toward one another while sitting on the steps to the stage during the morning service. Some people could be seen shaking hands after the service ended.

The 93-minute broadcast was removed from the church’s Facebook page following the service, also wiping out the comments it generated.

The church is known nationwide for its iconic “Lux Mundi” statue of Jesus, and its predecessor, which was struck by lightning in June 2010.

Supporters of Solid Rock commented on Facebook that Bishop was “fearless” and asked that “God bless him with boldness.”

Others said his actions were “more like reckless” and questioned “what’s bold about unnecessarily exposing people?”

“Why would people of God put a congregation in danger like that?” a third person wrote.

Some said they were not urging people not to praise and worship, but “with everything that is available to us, online platforms, this normal church service is very shocking.”

“Please please please stop putting your people at risk,” one person said. “You have the ability to go virtual. Please embrace it. Truth spoken can be done so virtually not just in person. This is about wisdom. Please.”

Asked by a reporter during a Sunday press conference about a large church reported to still be conducting services, Gov. Mike DeWine said his message to everyone is "this is serious."

"When you’re coming together, that’s dangerous," DeWine said. "I would implore ministers, priests, rabbis, think about your congregation. Catholic bishops in Ohio have closed all public services. Coming together in a large group is not a good idea. It is very, very dangerous.”

This news organization has reached out to Solid Rock for comment.

Another megachurch, Liberty Heights Church, which also sits just off Interstate 75 but to the south, said on its homepage that those interested in attending a service could join in online at 11 a.m. Sundays.

“While we are not gathering in our building, that does not mean we stop being the church,” the church wrote. “We are still the church. It just looks a little different right now.” The church then outlined how it will continue to be the church as it continues to “look to elected officials for guidance.”

Another megachurch, Ginghamsburg Church, which also is just off Interstate 75 but 38 miles to the north in Miami County, also canceled in-person events.