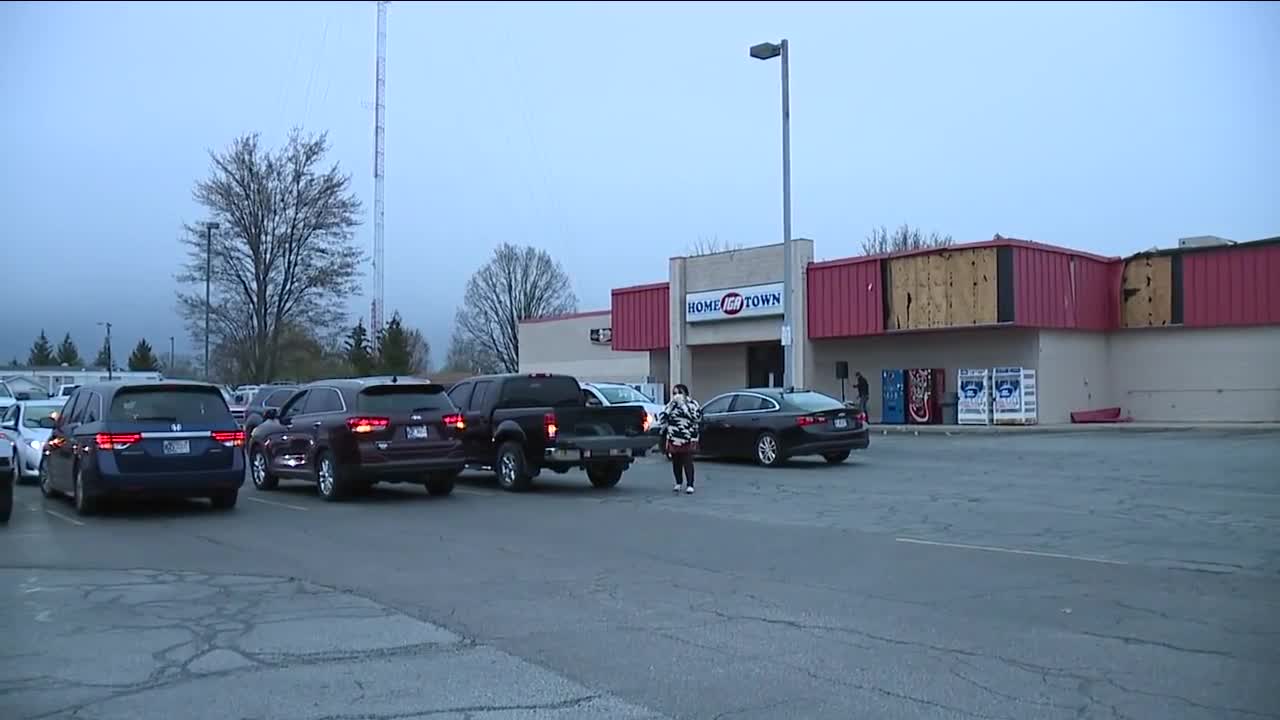 While he remains in the hospital, residents gathered at the IGA parking lot in what they're calling a hotspot for prayer.

VERSAILLES, Ind. — Downed wires, roofs torn apart and trees snapped in half litter a stretch of Adams Street in Versailles. After severe storms ravaged the area Wednesday night, it's a scene similar to those playing out all over town and across Ripley County.

With the clouds receding Thursday, neighbors came out to clean up and return to normal.

“Mother Nature gave them something else to think about," said Glenna Baugh, who works in Versailles. "It could’ve been much worse.”

For Robert Wood, who owns the town's lone IGA, the damage to his store was yet another blow.

“Heartbreaking when we knew how badly the family was suffering," said Versailles resident Roxanne Snodgrass. "Then, we understood the storms came through. And this is another blow. Like a kick in the gut again."

That's because Wood has been hospitalized since last Wednesday as he battles COVID-19.

“He does have the coronavirus," said Wood's daughter Bridget Back. "He’s at Christ Hospital. He’s in serious condition. But you know what, they pull together, and they love the Lord. There are people praying for him all over, all over this world.”

While he remains in the hospital, residents gathered at the IGA parking lot in what they're calling a hotspot for prayer.

“He started this IGA to serve the people in this community. He knew there was a need. It was without a store," Back said.

Now, that community is coming together to support Wood and his family through faith. On the same night as the storms, they did a prayer call with more than 100 participants.

"We’re praying for everyone. There’s so many people affected by this," Back said."

Each "Amen" and horn blow a silver lining Thursday, which these days are parked six feet apart.

Every car in the lot listened to the prayers broadcast over loudspeakers as a community lifted up one of their own fighting to return home. This group understands that the night is darkest just before the dawn.

“We know tomorrow is going to be a better day," Snodgrass said.