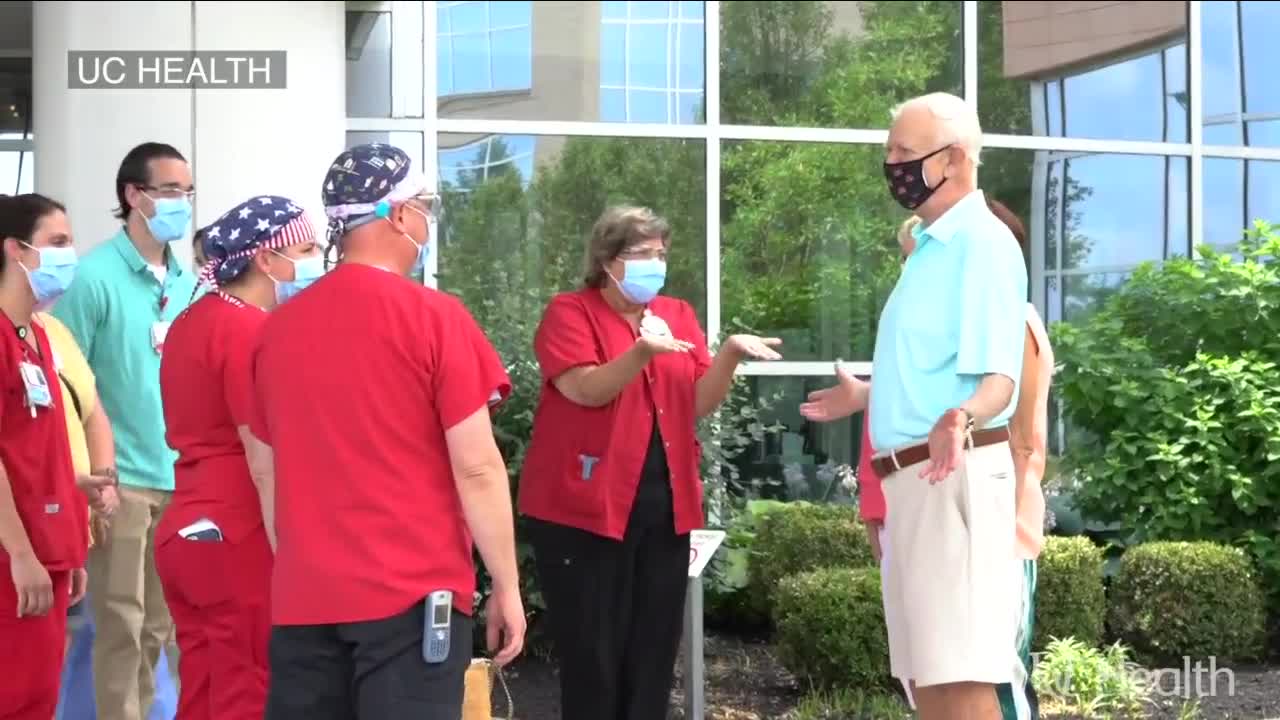 In May, 77-year-old Gary Campbell was released from the hospital after spending 3 weeks on a ventilator battling COVID-19. Now, he's got his golf swing back and just put down over 100 bags of mulch in his yard. He returned to UC West Chester to thank the medical staff.

WEST CHESTER TOWNSHIP, Ohio — WCPO first reported on COVID-19 patient Gary Campbell in May. At that time, he was just released from the hospital after spending three weeks on a ventilator. Now, just two months later, he’s got his golf swing back and he recently put down more than 100 bags of mulch in his yard.

”Well, in May he was a patient; now he's back to being a person,” Gary’s wife, Linda Campbell, said.

She said his progress has exceeded expectations – she chalks it up to his determination.

Campbell spent 25 days on a ventilator and doctors gave him a slim chance at survival.

Campbell said his wife of 56 years is one of the big reasons for his rapid recovery. She called him every night he was in the hospital, even when he was unconscious. Nurses held the phone to his ear.

“In the darkest moment, she was working with docs – they even admitted her help was immeasurable in saving my life,” he said.

The couple knows it wouldn’t have been possible without the medical staff at UC Health West Chester. That was one of the reasons why they returned last week to show the doctors and staff the result of their medical TLC.

“I wanted to meet them (and them) to meet him and see the gentleman they fought and cared so hard for,” the Campbells' daughter, Tammy Potts, said. "To see them, look them in the eye and say, 'Thank you.'"

In the masked reunion, elbow bumps took the place of hugs, but they were no less heartfelt.

“When I went back, I wanted to say 'thank you' personally to each one there, and I sincerely meant that,” Campbell said. “I wish I can help others – I'm hoping the video can do that – (to) say, ‘You can beat this. You can survive.’”