Urban beekeeping on the rise as honey bee population dwindles 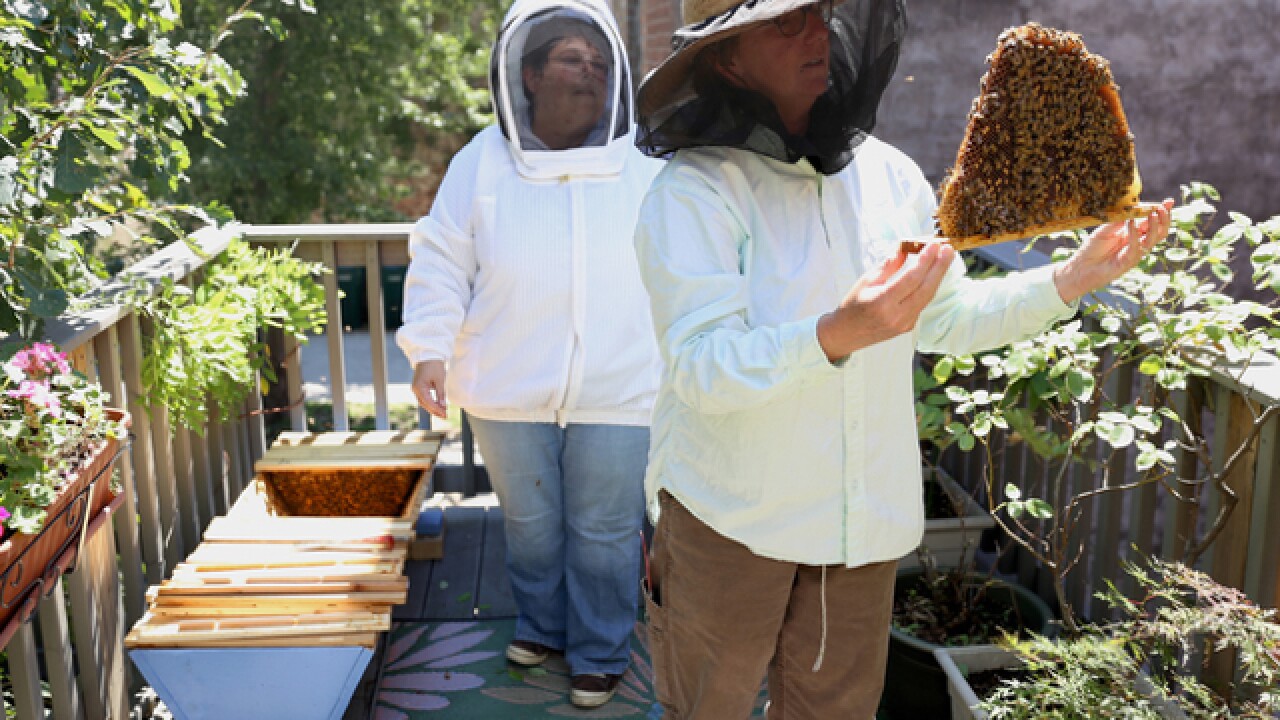 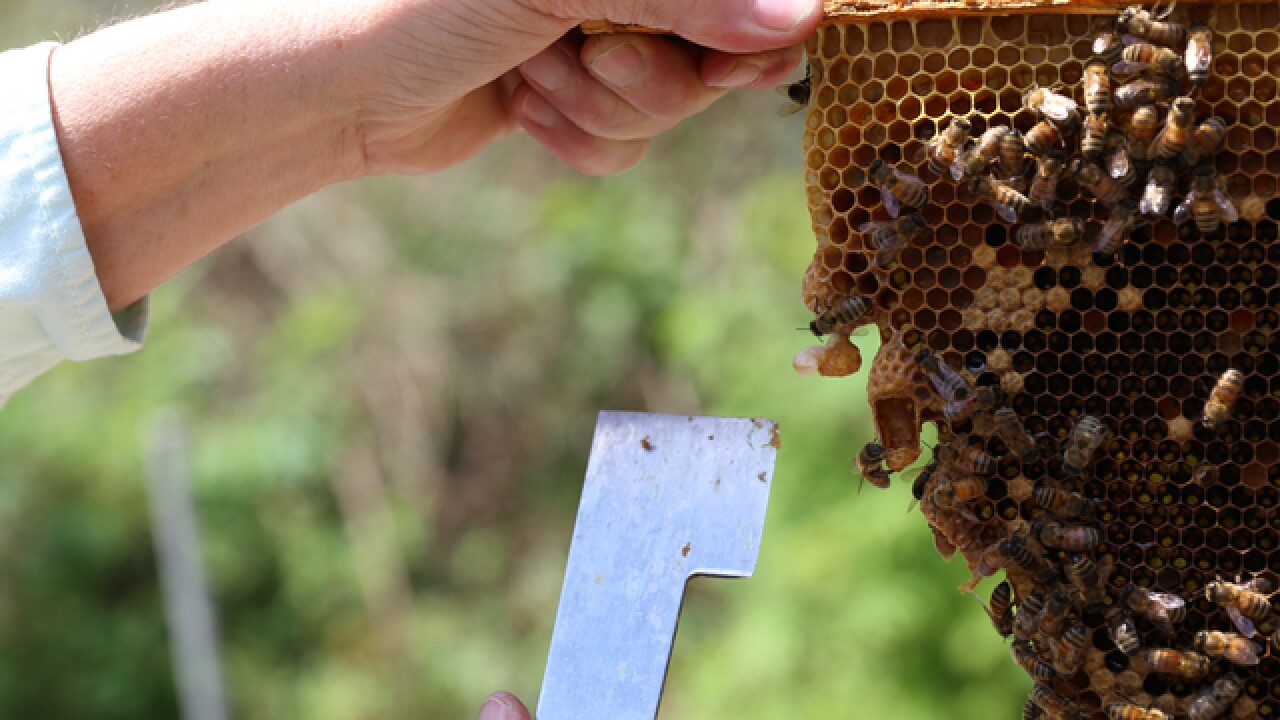 CINCINNATI -- Liz Tilton is working to save the world's food supply one bee at a time.

Tilton, an expert in beekeeping, has read the stories and can recite the research: Honey bees are dying off in droves, leaving their hives and their babies for reasons that have stumped even the most scholarly of researchers.

It's a mystery threatening to forever alter the world's food supply. According to the USDA, bee pollination is responsible for $15 billion in increased crop value each year. Approximately one in three mouthfuls in our diet is affected by honey bee pollination, alone.

Without sufficient bee pollination, experts say consumers will feel the brunt of the effects as farming costs increase and food prices skyrocket.

Check out an audio slideshow about the Rise of Colony Collapse Disorder and urban beekeping here.

"If bees start to die, your food suppliers get thinner, so there's less diversity in your food supply and you don't have honey --- which is one of the greatest things in the whole world," Tilton.

So for Tilton her mission is to raise awareness about what's happening to the bees. She runs a full-service bee company, TwoHoneys Bee Co., which provides safe beehive removal and tips for the novice backyard beekeeper.

Among her clients is Over-the-Rhine resident Catherine Stehlin, who approached Tilton last spring about keeping bees. A year and a half later, a healthy beehive sits on Stehlin's balcony across from Washington Park.

“You just look at all the stuff they make. The comb, all that honey, pollen and {they} keep raising more bees continually. It’s pretty incredible,” said Stehlin.

While cities are untraditional settings for beekeeping, research shows bees thrive in urban environments because urban gardens and vacant lots are more wild.

"We're using chemicals like crazy, pesticides and herbicide -- we're mowing everything. We need [lawns] to be wilder. The bees for me that do the best are the bees that are around wild environments," said Tilton.

There also has to be diversity in bees' food source, which is why the insects struggle to survive on modern day farms and in the suburbs.

The legality of beekeeping is determined by each township. Ray Babcock, president of the Southwestern Ohio Beekeeping Association, began backyard beekeeping at his Wyoming home, but eventually had to move his hives to a friend's farm.

“They have an old rule that says ‘You shall not harbor bees.’ That sounds almost biblical it's so old. Cincinnati does allow it. Certain towns do and certain towns don't. You'd have to check with each town to see if they allow them or not. We're hoping we can get more towns in on this program because if we don't have local beekeepers, the ones in the wild are so few and far between,” said Babcock.

From New York City to the White House, urban beekeeping is taking flight in cities across the country-- and around the world--as awareness about honey bee health continues to grow.

"It really is a miracle working with them and watching them...just watching each hive develop -- I just marvel at the beauty of what's in there each time. These girls without a queen still trying to make it work. Try as she might, it's not going to work. It's nature. It's fun watching her," said Babcock.

Why Are The Bees Disappearing?

The mass loss of the honey bee population is attributed to Colony Collapse Disorder (CCD) – a phenomenon that local researcher Dr. Gene Kritsky has studied during his 30 years of teaching at the College of Mount St. Joseph.

He is working to figure out why the phenomenon is happening – again.

"Everything that's been looked at as a possible cause can't be repeated for us to say 'Yes, that's the cause,'" said Kritsky.

In addition to CCD, there are several factors working against the honey bee. Some experts believe that CCD may be a combination of these events.

Chief among their concerns are:

CCD was first discovered on a widespread scale in 2006 in migratory beekeeping. As hives were being shuttled across the country for crop pollination, the bees were disappearing in masses. Over the years, the honey bee population continues to dwindle at alarming rates, leaving researchers stumped by the loss.

Babcock has witnessed firsthand the honey bee population diminish in the Tri-State.

"There's just no honey bees anymore, so sadly we just don't see the bees around our house anymore. We see bumblebees and other bees, those are important too, but the honeybee is just not there,” said Babcock.

Last winter Babcock suffered about a 55 percent beehive loss for the first time in his career. Some places even saw up to a 60 percent loss.

"The past five or six winters, whenever I hear about people losing their bees, I'd think what bad beekeepers they were. This past winter I joined the bad beekeepers group and all of a sudden I was humbled," said Babcock.

In an attempt to rebuild the population, bees from the South are used to set up new hives, which Tilton says attributing to bee loss.

"They have no idea how to forage here. They're not genetically designed to withstand winters in Midwest and northern states, so these past years have been so awful," said Tilton.

Some fear the direct effects of CCD point to an ominous reality lingering behind the research. As the awareness of the world's pollinator crisis increases comes to light, Tilton hopes it sparks a change in human behaviors.

"The bees are our current canary in the coal mine. Something is dreadfully wrong in our environment and they're telling us because they're dying at unprecedented rates," said Tilton.

While urban beekeeping may not save the honey bee population, Tilton says it's a step in the right direction.

"I don't know if urban beekeeping is rebuilding the bee population or making it stronger...This is all I know; the more people who keep bees become aware. It's just like why we have zoos or national parks, because the more people we get into those places, the more people then appreciate their worth," said Tilton.