'We're doing it for the next generation': P&G ads on racial diversity continue to evolve

Expert: 'Leaders should take these stands' 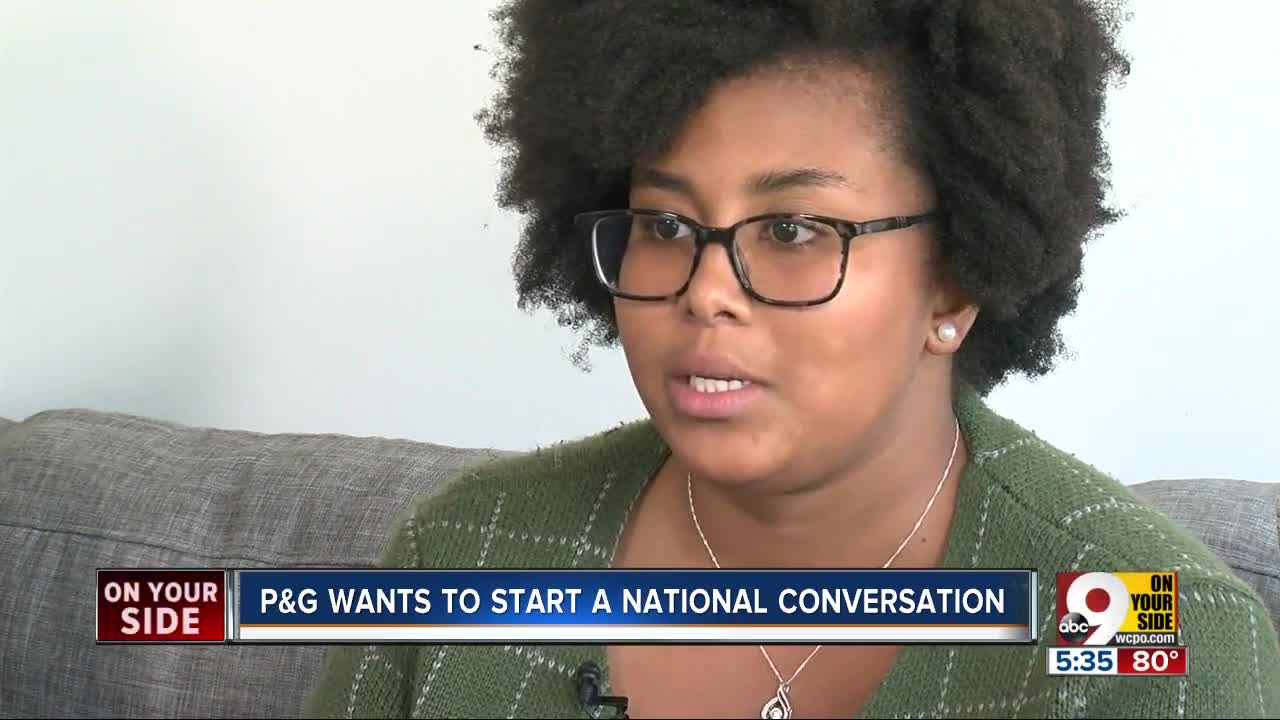 “The Look” and “The Talk” are part of a series of ads in which P&amp;G takes a stand on social topics, including racial bias, sexual harassment, pay equality and LGBTQ rights. Advertising experts, such as Bates, agree the strategy is sound, although it could take decades for those rewards to fully materialize. 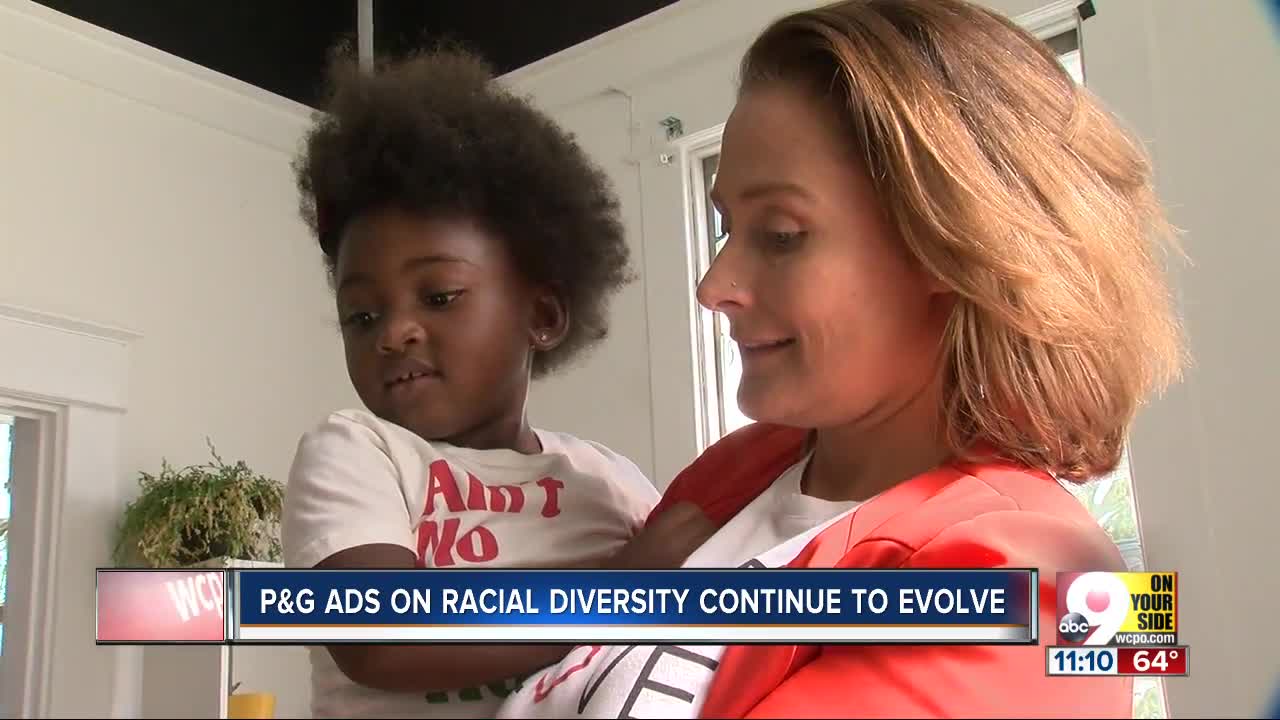 CINCINNATI — Dr. Littisha Bates is a tenured Associate Professor of Sociology who won the 2016 Dean’s Award for Faculty Excellence at the University of Cincinnati’s College of Arts & Sciences.

But those credentials didn’t matter to an older white woman who wandered through McMicken Hall one day looking lost. When Bates offered to help, the woman looked past her and said she wanted to talk to a professor.

“Had I been having a better day I would have called her on that really microaggressive behavior that has stayed with me,” Bates said. “She could not fathom in her mind that I was someone who could help her.”

To fully appreciate why that experience stayed with Bates, you’d have to know about all the other times in her life she felt overlooked or underestimated because of her race. Or you could watch “The Look,” an ad about unconscious bias from Procter & Gamble.

“For those of us who have to convince people that this is our experience it kind of lets us off the hook in a way,” Bates said. “P&G is stopping us from having to constantly validate our lived experiences because they showed it for us. It may be harder for someone to believe me when I say this thing happened to me but then they see this P&G ad they’re like, ‘Oh, that’s what you were talking about.’”

Bates is one of four women who participated in an informal focus group in which WCPO tried to gauge consumer reaction to P&G’s ads on racial bias. All four watched “The Look,” an ad released this summer, and “The Talk,” an award-winning ad from 2017 that shows black mothers preparing their daughters to handle the racism they will inevitably encounter in their lives.

“The Look” and “The Talk” are part of a series of ads in which P&G takes a stand on social topics, including racial bias, sexual harassment, pay equality and LGBTQ rights. Advertising experts, such as Bates, agree the strategy is sound, although it could take decades for those rewards to fully materialize.

“We see consumers interacting very, very positively about these campaigns that we put out because it shows that we understand the issues that are out there,” said Lela Coffey.

Coffey is the Brand Director for Multicultural Beauty for P&G.

“It shows that we’re not just putting some advertising out there but taking action to do something different and get the world to think differently," she said.

But the strategy isn't only about changing the world. P&G is also trying to grow the business with this strategy.

Coffey also points to the successful launch of P&G’s newest hair-care line, the Golden Milk Collection by My Black is Beautiful, as evidence that the campaigns are having a tangible impact on P&G’s growth. She wouldn’t provide sales numbers, but said the shampoos and conditioners formulated for black women are catching on with consumers who appreciate P&G’s efforts to combat racial bias.

“We do know in some of the tracking that we’ve done online that people are buying the products due to what they’ve seen us do,” Coffey said. “We don’t have sales data to directly tie back but what we know is the chatter that we see online and the comments that we see on the My Black is Beautiful platform indicate very positive responses.”

P&G’s Old Spice brand achieved a $40 million revenue boost in the first eight months of this year, driven in large part by a 9 percent increase in buying from African-American households.

“We get access to big-name talent because of the fact that they know P&G is a force for good and a force for growth,” Krehbiel said.

Voice of the consumer

But is it really leading to increased sales for P&G? Not in the Bates household. At least not when it comes to shampoo.

“We have three, four, five different hair types in my household so it’s been a little bit of a challenge to find which products work best for us,” Bates. “But it’s a product that I’m willing to support.”

Bates is one of three customers WCPO interviewed at the Grace + Grit Spa in Silverton, founded by the daughter of a P&G retiree: Crystal Grace. Both women praised P&G for its commitment to the issue and said it makes them feel better about the P&G products they already use. But they haven’t changed their buying habits because of the campaign.

“I like products that have more natural ingredients, more holistic,” Grace said. “I have tried the P&G line (but there are) so many products out today that are being manufactured by African Americans that I really think understand me a little better.”

“I am a 4C hair type,” said Britany Bibb, program coordinator for UC’s African American Cultural Resource Center. That means her hair is more tightly coiled, fragile and harder to moisturize. “It’s a very specific need that I have. Often, I can’t find just like a mainstream brand to fit me.”

Elizabeth Blackburn is a project management consultant who has worked with P&G in the past. Three years ago, she adopted an African American baby from the Lexington area, named Saylor James. Blackburn is raising the baby with help from Grace and others in the black community. Blackburn said she is open to buying P&G hair care products for her daughter but is sticking with kid-friendly shampoo for now.

“I am a loyal person to P&G because I have a background with P&G and I have friends and family that are with P&G but it intensified when they stepped out of the box and did this,” she said. “It’s a risky move.”

African American consumers will spend about $1.75 billion this year on shampoos, conditioners and styling products formulated specifically for them, said Toya Mitchell, multicultural analyst in the Chicago office of Mintel, a global market-research firm. This segment is expected to grow about 14 percent in the next five years. But it’s a crowded market with lots of new competitors and consumers willing to switch allegiance when a better idea comes along.

“This particular consumer is always searching,” Mitchell said. “Between how she wants her hair to look or correcting issues that she may have, whether it’s dryness or breakage, she’s always looking for the next best product or tool that’s going to help her achieve her style.”

Although P&G’s ads on racial bias don’t mention specific brands, Mitchell thinks they can help the company cut through the clutter to reach more consumers looking for “magic in a bottle.”

“If a brand not only tells a story but it’s effective, they have an opportunity to be in her cabinet or in her shower,” Mitchell said.

Coffey, for one, is ready for that challenge. When told about Bibb’s skepticism that My Black is Beautiful products would work on her 4C hair, Coffey said, “I’d love that consumers name. We could send her some product.”

Fortified with a “Golden Milk” formula that includes coconut milk, honey, turmeric and ginger, P&G’s new shampoos and conditioners are “designed specifically for natural hair and the curly and coily end of the spectrum,” Coffey said. “Typically, what we see with 4 C consumers, if they’re using the heavier end of the moisturization in those products, they should have pretty amazing results.”

Although she hasn’t yet made the switch, Bates said she loved the free samples she received from P&G.

“I’m super impressed with the ingredients that they use,” she said. “And it smells delicious.”

Miami University Marketing Professor Timothy Greenlee said this is all part of “the long journey” that P&G is trying to make with consumers by crafting advertising campaigns that are relevant to them in the times when they run but build on relationships that evolve over time.

For African American consumers, P&G’s “long journey” is at least 68 years old. That’s when Ebony magazine ran P&G’s first print ad featuring a black woman who felt “like a new woman” thanks to “the Tampax method of sanitary protection.” In 1970, P&G featured a black fire chief whose daughter interrupts a meeting to tell him she had only one cavity after using Crest with fluoride. When his white colleagues chortle over the news, the chief pushes back: “How many cavities do your kids get?”

That’s a long way from black mothers in “The Talk” telling their daughters that it’s not a compliment when someone tells them they’re “pretty for a black girl” or how to behave when stopped by police: “This is not about you getting a ticket. This is about you not coming home.”

But Coffey said the evolution was a natural one, driven by consumer feedback it heard “time and time again” from a social media platform that P&G launched in 2006 to counter negative portrayals of black women in the media. That platform, My Black is Beautiful, has nearly 3 million Facebook followers. It became a brand in June when P&G relaunched the platform with its “Golden Milk” shampoo line and “The Look,” which examines how racial bias impacts black men.

P&G has won both praise and condemnation with the more provocative approach.

“The Talk” won 2018 Emmy, Effie and Clio awards along with a Grand Prix in Film at Cannes Lions. It was also dubbed a racist ad that “crosses every line!” in a 2017 headline by Conservative Fighters News.

Response to “The Look” hasn’t been as intense, possibly because P&G launched the ad through a website that provides more context than the You Tube launch employed by “The Talk.” That approach has also led to less exposure. “The Talk” has generated nearly 2.4 million views on You Tube, while “The Look” web site has logged about 400,000 visits.

But “The Look” has sparked dozens of “community conversations,” organized or encouraged by P&G.

“It’s important to us that it’s not just seen as a black issue," Coffey said. "We want to be having joint conversations, bringing in people of all races to have those discussions. It’s the conversation that we found drives the empathy and without that empathy you can’t drive real change.”