More than 200 gather to discuss sustainability 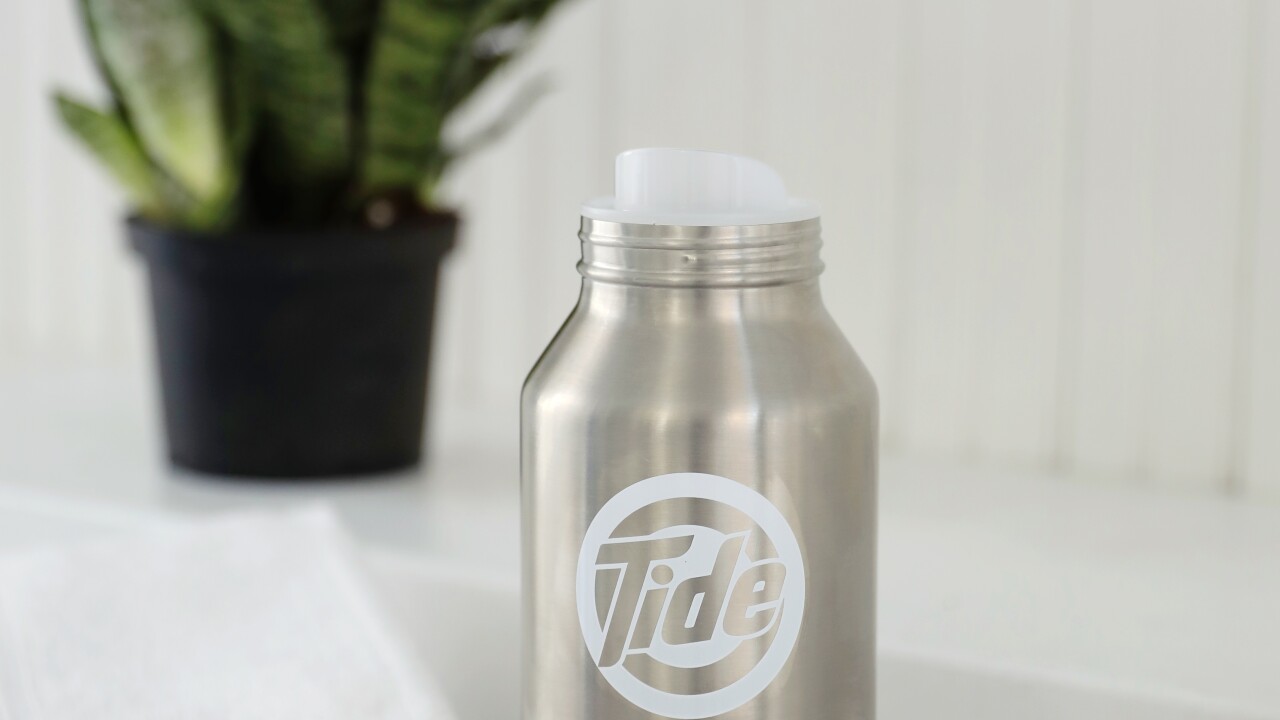 Tide is one of 10 P&amp;G brands participating in Loop, which ships consumer products in refillable bottles to reduce packaging waste.

CINCINNATI — Cincinnati is the center of the green chemistry universe this week as Procter & Gamble Co. hosts more than 100 companies searching for chemical ingredients that are less harmful to humans and the environment.

The event marked the debut of a stainless steel container that Tide purclean laundry detergent will test in 5,000 households in the New York metropolitan area later this month. The refillable container is one of several products being offered through Loop, a subscription service that cuts down on packaging by shipping refills directly to consumers.

The Green Chemistry & Commerce Council, or GC3, opened its 14th annual Innovators Roundtable at P&G headquarters yesterday. The group moved the Great American Ball Park this morning, where Lowe’s was among the presenters. The home-improvement retailer is working with others to eliminate paint strippers that contain methylene chloride. Already banned in Europe, the compound has been linked to dozens of deaths in the U.S.

“Major retailers now have lists of chemicals of concern that they’re trying to remove from their products,” said GC3 Director Joel Tickner. “We’re putting out a statement from 10 retailers that says, ‘These are the areas where we want to see innovation.’”

Those areas include flame retardants, solvents, surfactants, water repellents and chemicals used to soften plastic, Tickner said.
P&G is an important driver of green-chemistry innovation in the U.S. because any changes it makes in its supply chain stand a better chance of being adopted by all consumer-product companies.

“There are a lot of smaller brands who can do it more quickly,” Tickner said. “But when P&G is able to make these transitions that means the whole market is able to shift.”

P&G has been investing heavily in what it calls ‘natural’ alternatives to its most popular products, including Tide. Its newly reformulated purclean laundry detergent replaces petroleum-based ingredients with plant-based alternatives from coconut, soy and corn.

Tickner, a professor of public health at the University of Massachusetts Lowell, said P&G is known for finding green-chemistry alternatives that actually work.

“That is a very tough thing,” he said. “When Johnson & Johnson went to take a chemistry out of its baby shampoo it changed the color of the shampoo. That color is the brand. So, they had to reformulate it. Took about six years and several million dollars to get it back to where it was with the new chemistry. So, it’s a big challenge. You need large R&D resources to be able to do that.”

“We’ve got a lot of work underway on how we reduce our dependence on plastic,” he said. “The best thing we can do frankly is light weighting. So, we’re doing a lot of work on how do just reduce the total plastic that goes into a package.”