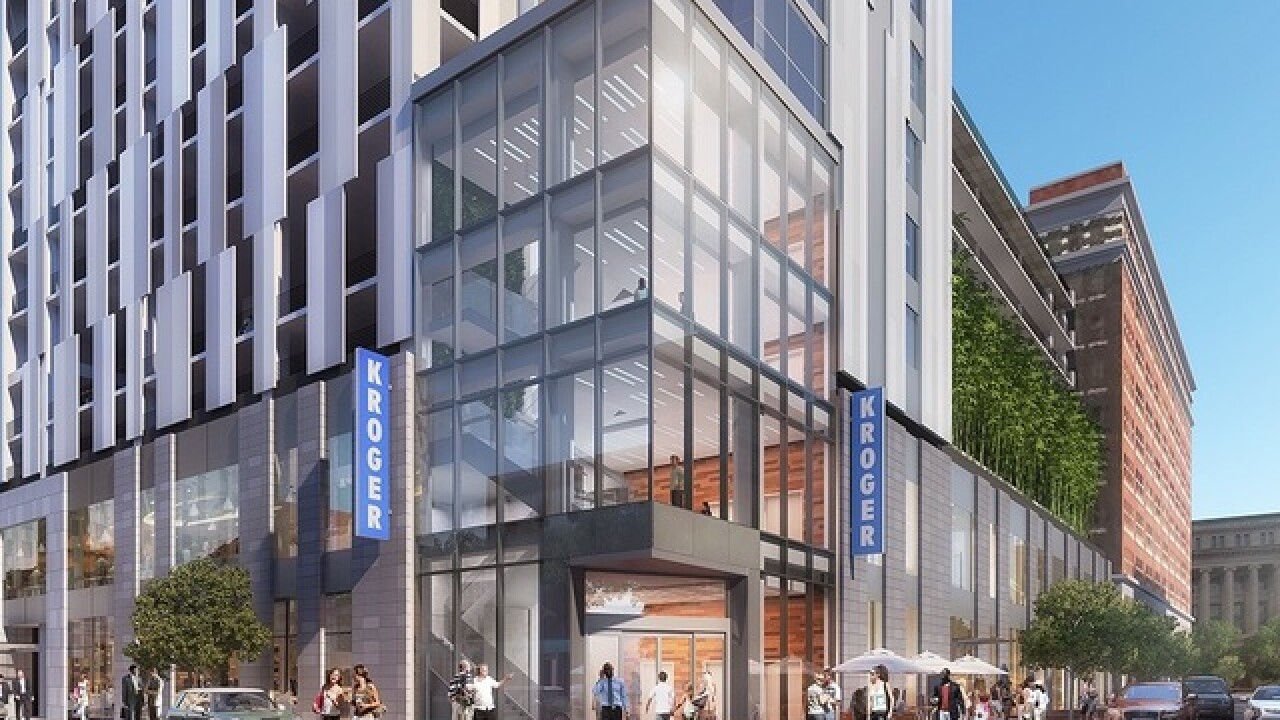 Copyright 2017 Scripps Media, Inc. All rights reserved. This material may not be published, broadcast, rewritten, or redistributed.
<p>The corner of Court and Walnut will be the front door of Kroger's Downtown store, slated to open by 2019.</p>

McMullen also announced a 200-store expansion of branding concept tested in Newport and hinted that its digital division might relocate out of the Atrium building. And he answered shareholder concerns about the company’s stock price and its shift to digital shopping.

“The new store will be 45,000 square feet, which is twice the size of our Vine Street location,” McMullen told shareholders. “We will offer a greater variety of traditional supermarket items and additional food options, including fresh prepared meals. The store will also feature a Murray’s Cheese Bar, a Starbucks and an amazing food hall.”

McMullen also announced that its Treasure EmporiYum merchandising concept will expand to 200 Kroger Marketplace stores after a Newport pilot test showed in-store kiosks and social-media campaigns can boost the sales of unique flavors in its Simple Truth, Private Selection and HemisFares brands.

McMullen also revealed that Kroger is hiring more digital employees in other cities because it’s having trouble finding the talent it needs in Cincinnati. And he suggested a Digital Hub announced by the company last June might move to another location.

“That decision is a lot bigger than people understand because if you look at digital business when it’s growing at 40%-plus, you continue to hire more and more people to support that,” McMullen said. “When we announced it, we had 500 people in our digital team and we said we would soon have 1,000. At this point, we still don’t know where our permanent home will be.”

McMullen got a mix of compliments and criticism from shareholders, including one from Detroit who praised Kroger’s minority contracting efforts and a student from Lexington who thanked the company for its education-reimbursement program, Feed Your Future. Two others questioned whether the company’s focus on digital sales is coming at the expense of its traditional grocery store business.

“When are we going to get back to our brick and mortar business?” said Vic Ellison, a Kroger shareholder for 45 years. “I understand that you’ve got to be visionary, but we are way, way, way out ahead of our skis.”

McMullen said Kroger’s digital sales have gone from zero to $5 billion since 2014 and are on pace to reach $9 billion in the near future. But he added that the number of hours worked in its brick and mortar stores increased in 2018. He said customers are using digital services to make their grocery shopping more convenient, not avoid the store altogether.

“Please don’t take our conversation on online and digital to mean that our physical stores are any less important. They are not,” he said. “We’ll always continue to strive to make our customer experience better.”