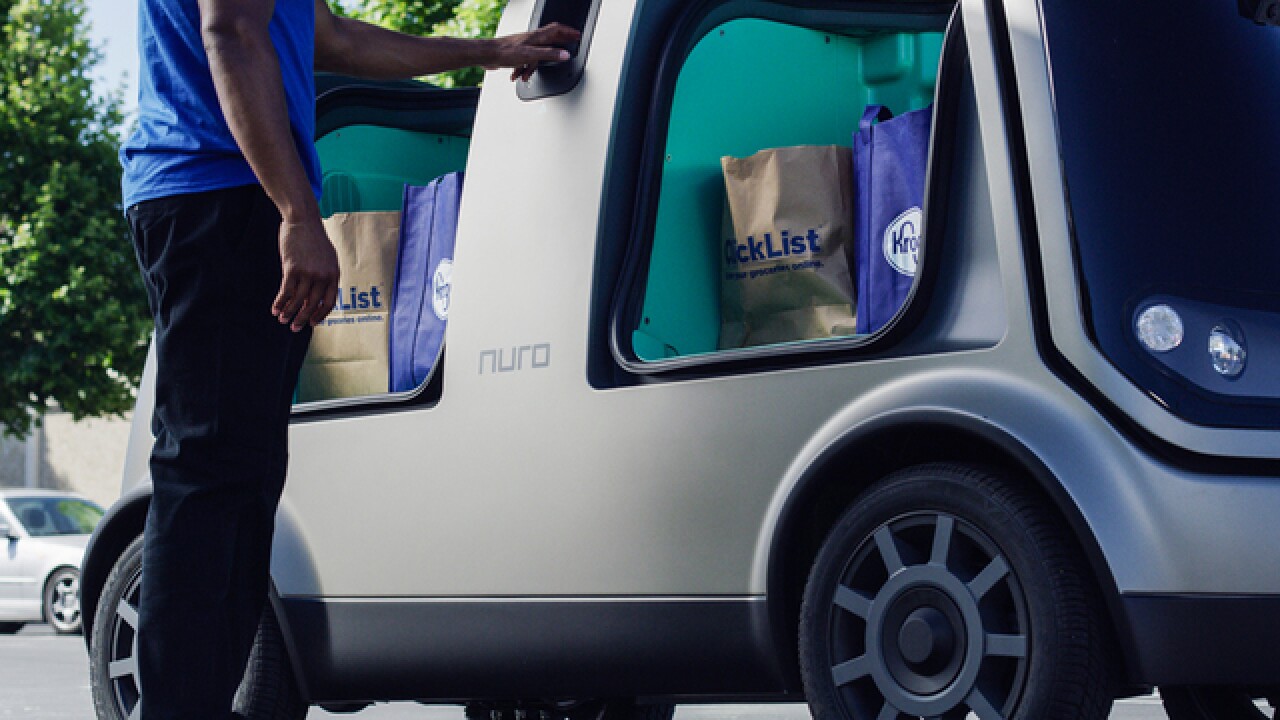 CINCINNATI -- Did you expect them to stop at robot-powered warehouses?

The Kroger Co. has announced yet another new partnership to redefine grocery shopping.

Kroger will conduct a pilot test with Mountain View, California-based Nuro to deliver groceries with fully autonomous vehicles. Kroger isn't saying where the service will be tested, only that it will be announced soon and begin this fall.

The partnership with Nuro follows a blockbuster announcement last month that Kroger will develop up to 20 robot-powered warehouses in a partnership with Ocado, a British online grocer. Kroger is also acquiring the Chicago-based meal kit company, Home Chef.

Nuro was founded in 2016 by the principal engineers of Google's self-driving car project. This will be the first application and deployment of Nuro's hardware and software for commercial use.

"If you have a sick kid at 1 o'clock in the morning, it can make a delivery," Kroger CEO Rodney McMullen told reporters at the company's annual shareholders meeting Thursday. "We're there for the customer however they want us to be there for them."

McMullen said the new partnership is not an exclusive arrangement for either company, but declined to provide more details on the terms of the business deal.

"It's a partnership," he said. "There's no financial considerations other than we're going to both learn from each other."

The companies have been talking for more than a year but only recently decided to take the plunge on a pilot test.

"It's very clear that Kroger is investing in this for the future and is very serious about how can you continue to innovate and produce the best experience for the customers," said Dave Ferguson, Nuro co-founder.

The 1,500-pound car can travel for eight hours at 25 miles per hour on a single charge and has two compartments that can hold six grocery bags without stacking. A larger model is under development that holds up to 20 bags and includes a cooler for refrigerated items.

"The industrial designer for this vehicle is the same guy that designed the Segway," Ferguson said.

Here's how the autonomous delivery will work: Customers place a digital order using their ClickList account. The order would be filled at the closest Kroger store. Once loaded, the car sends real-time updates to let shoppers know its location. When the car arrives, customers have the option of punching in a personal identification number or opening the doors with their cell phone.

Kroger Chief Digital Officer Yael Cosset likes the system's flexibility because Kroger ultimately wants to be able to deliver groceries to every home in America.

"Some geographies don’t have the density to really support a heavy infrastructure for delivery so it just becomes another option in our portfolio of fulfillment capabilities so we can have a sustainable delivery service across all of America," he said. "The vehicle looks fantastic and has great technology specs in terms of battery life and range. That’s very important. More important is the quality of artificial intelligence and the science that’s in the vehicle to really optimize the routing of all the orders ... You don’t want to create a beautiful device that’s not smart enough to be scalable. Their team has done a fantastic job of developing that artificial intelligence layer."

McMullen even went so far as to suggest that Nuro's delivery robot is a more practical option than those delivery drones a certain rival is developing, although he didn't mention Amazon by name.

"It's technology, because of the leadership of the whole team, that can be done. Drones are a little more complicated," he said. "We just believe this will help our customers better than a drone will."