Home Tour: Come watch the wildlife from this Villa Hills 'Cabin in the Woods' 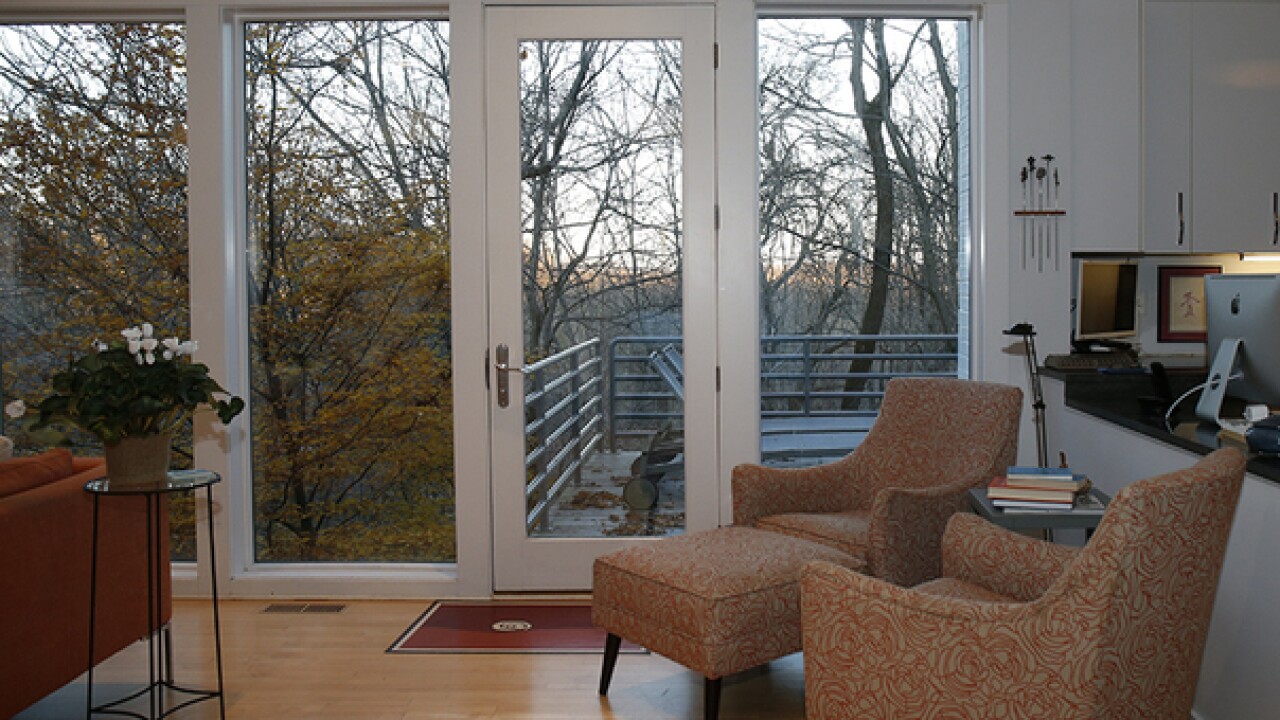 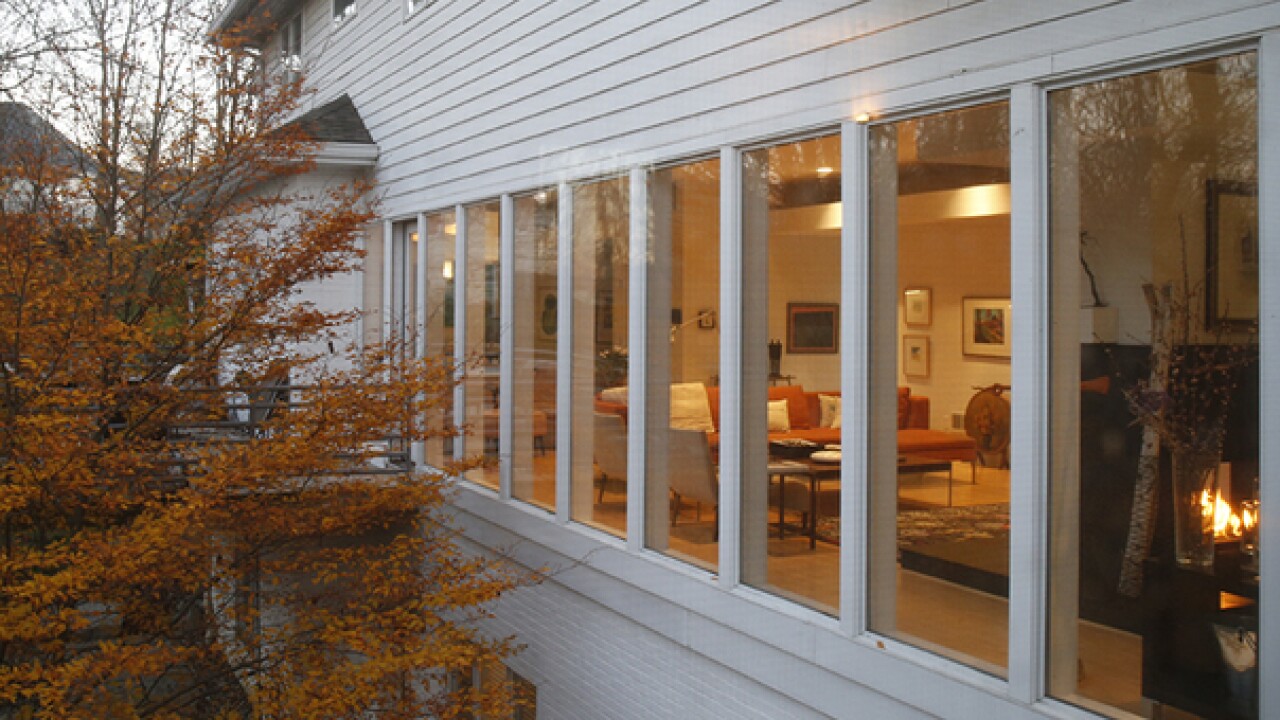 Correction: A prior version of this story misspelled Jeanne Schroer's last name. It has been corrected. WCPO regrets this error.

VILLA HILLS, Ky. -- John and Kim Luber were happy with the house they built with Drees Homes in Crescent Springs. Their three children were happy, too. They went to good schools and had lots of good friends in the neighborhood.

Then John and Kim got the itch to build again, and one day, more than 20 years ago, when on a family walk just over the Crescent Springs corporation line in Villa Hills, they wandered into a new subdivision. There it was: a 2.5-acre hillside lot set way back from the street.

"We walked down here with the kids, and I thought, 'I could live down here' ... and now we have what became to be known as The Cabin in the Woods," Kim said.

Not that it looks much like a cabin from the outside, but being able to peer through tall banks of windows into the surrounding woods creates a comparable feel.

The Lubers' is the kind of two-story home you'd think you could live in forever, but, frankly, they said, the 3,608-square-foot, architect-designed home is too big for just them and their pet dog.

The couple, who became empty-nesters 1 1/2 years ago, recently listed their 5-bedroom, 4 1/2-bathroom home for sale at $774,900 and are considering moving into the urban core of Cincinnati. Behind them they'll leave a home they love and property they expanded to 8 acres by purchasing surrounding lots.

John and Kim are sad but excited about making a move.

"It was just what we wanted," Kim said of their home. "It was accessible to school and friends, and we didn't have to keep our front lawn looking like a golf course."

Kim said she will miss the colorful leaves in the fall and watching snowflakes fall outside the master-bedroom window. John said he will miss all the wildlife that frequents their property.

"You can sit right here on Sunday mornings and see a family of wild turkeys come walking down the driveway," he said, gesturing to six chairs on the front deck. They've seen foxes, deer, and occasional coyote and other animals in the woods as well.

The view from the opposite (north) side of the house, where there are also 12 picture windows running the length of the living and dining rooms, features Cincinnati's Carew Tower and Great American Tower at Queen City Square in the distance.

The Lubers' private lookout has been great, but now, John said, it's time to give Kim what she requires most: a home, not a condominium, within a short walk of a coffee shop and grocery store.

The couple -- he's a dentist, she's a gym owner and they're high school sweethearts with degrees from Indiana University-- hired Mariemont architect Chris Kepes to design their home at the recommendation of friend Jeanne Schroer.

Their wish list included as many windows as possible to be open to the woods. And the house had to be wide from east to west to optimize the views to the north and west. Rough sketches, John said, led to the creation of a long wall -- a "spine" as he called it -- just inside the front door that creates a windowed hallway connecting the master bedroom at one end of the house and the floating staircase at the other.

The open-concept kitchen-dining-living space is interrupted only by a partial wall with a see-through fireplace between the latter two spaces. All walls are white to maximize the pop of the couple's colorful artwork, the floors are a lightly stained maple, and the lighting is recessed.

The result is a sharp, clean setting for woods and wildlife gazing that feels and looks as modern today as it was when the Lubers moved in 20 years ago.

Kepes's design brings in natural light at every turn, and his clever use of soffits required for the HVAC mechanicals creates of sharp angles that add to the architecture.

Most unexpected, however, is the vaulted and curved sunroom past the staircase at the east end of the first floor. The lower part of the curved wall is almost all windows, and five clerestory portals let in light just below the 20-foot ceiling.

The second-floor hallway ends at a balcony that hangs out to the middle of the room. Three stacked windows and a framed glass door to a breezeway between the house and three-car garage increase the openness of the room.

From the outside, the sunroom is particularly dramatic when viewed at dusk. Warm light spills out through the portals to highlight three natural, branch-like beams that support a large, triangular eave, and the largest portal juts out in triangular fashion, as well.

A second house-wide hall along the spine that is illuminated by skylights branches off to three carpeted bedrooms on the second floor. Two share a Jack-and-Jill bathroom and all have plentiful windows that set them in the treetops.

The Lubers' spacious, two-level basement features a guest suite with a walkout to a seldom-used paver patio at the back of the house. There's also a large family room and a gym with an unusually high ceiling.

"With this 10-foot ceiling, there's so much you can do down here," John said. "Even a tall Bengal can lift weights down here."

What stays and what goes

Guests get to the house down a long driveway that passes a house on the street before opening up to a large carport. There are two things they are likely to notice first: the aubergine front door and a sculpture of a naked woman to its right.

John bought the unusual sculpture from Malton Art Gallery in Oakley and had it delivered secretly to Kim on her 40th birthday. Sometimes at night, the piece can startle people, he said.

The purple door will stay when the Lubers move, but that startling sculpture is going with them.