Gaslight Property, at 25, still betting on Clifton, its home neighborhood 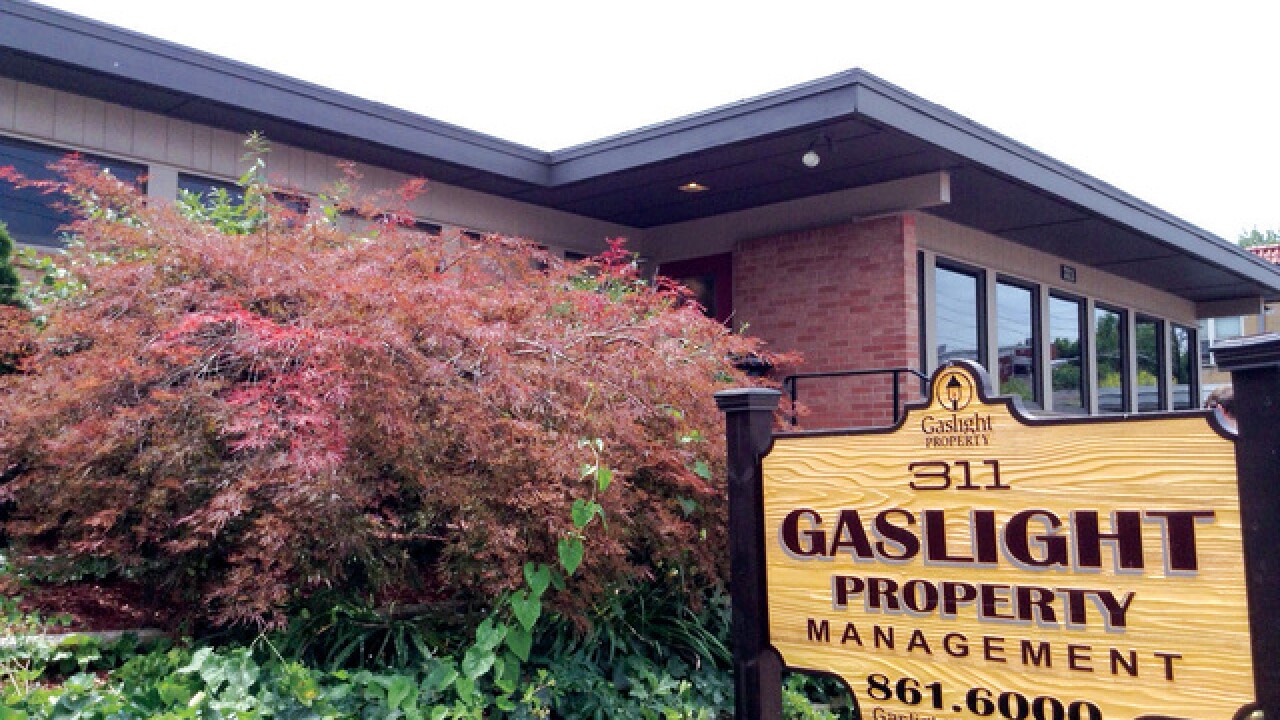 <p>From its beginnings with a single rehabbed house in Northside, Gaslight Property marks its 25th year with 1,600 rental units and a fair amount of retail space — most of it centered around Clifton. Its headquarters is on Howell Avenue. (Thomas Consolo for WCPO)</p>

CINCINNATI — David Taylor was still a student at the University of Cincinnati in 1991 when he maxed out all his credit cards to buy and renovate a house in Northside.

It wasn’t long before he realized the rent he was collecting earned him more money than the mortgage and credit-card bills cost, and so he tried it again. The second house, also in Northside, cost $8,000 to buy, but it still made money.

“Then it snowballed,” he said.

Fast forward a quarter century. Taylor hasn’t moved far, but he’s come a long way: He’s now chief executive of Gaslight Property, one of the city’s major rental-property companies. Now marking its 25th year in business, the company owns more than 1,600 rental units, many in renovated historic houses like David Taylor’s first one in Northside. Most also are clustered around Clifton, the neighborhood Taylor has called home for 50 years.

Gaslight also owns a portfolio of retail space, again mostly in Clifton. It’s a key player in the viability of the Ludlow Avenue business district.

The company in May received a birthday present from Cincinnati’s Uptown Consortium, when it won the Award of Excellence for Uptown Large Business at the consortium’s Fifth Annual Business Awards. Uptown includes the neighborhoods of Avondale, Clifton, Corryville, CUF and Mt. Auburn.

Taylor spoke to WCPO.com with his brother Rob in Gaslight’s headquarters on Howell Avenue. Rob Taylor joined the company about 15 years ago, when David Taylor realized he needed help with managing his growing operation. He’s now the company’s chief operating officer.

“We have 50 employees now,” Rob Taylor said. Many have been with the company for more than a decade, he said. For a family-owned company, that’s gratifying. “People have bought houses and raised children thanks to jobs with us.”

Gaslight is still growing. Over the past year, it’s doubled down on its home neighborhood with the opening of the Whitfield, a new, two-building, luxury-apartment complex on Whitfield Avenue south of Ludlow Avenue. The first residents have already moved into one building of the $17 million development; construction is wrapping up on the other.

For the brothers Taylor, the Whitfield is a milestone for several reasons, one symbolic: The Whitfield is Clifton’s first new housing construction in years.

“I think it was only Clifton and Camp Washington in the city that hadn’t had new housing in the last decade,” Rob Taylor said.

That partly reflects the stability and density of the neighborhood’s existing housing stock, he admitted, but with stability comes limitations, and Clifton (and by extension Gaslight) was missing out on luring the younger residents, particularly millennials, that seek out urban living and are bringing new vitality to parts of the city like Over-the-Rhine.

The Whitfield puts Clifton back in that game, he said.

“We want to bring people to the neighborhood,” Rob Taylor said.

For a company that has grown mostly by acquiring existing structures, the Whitfield also gives Gaslight a blank canvas to showcase what it — and Clifton — are capable of. It’s also built to reflect the changing expectations of tenants.

Unlike other rental companies in the UC area, less than half of Gaslight’s tenants are students, and of them only a small percentage are undergraduates. Unlike students, Rob Taylor said, young professionals tend to want amenities without the worry of maintenance. “People like service today,” he said.

The Whitfield fits well into that model with its communal public spaces maintained by the management company. Gaslight hired Village Green, which specializes in higher-end apartment properties, to oversee operations at the 117-unit complex. Among other properties Michigan-based Village Green manages is Stetson Square in Corryville.

The Whitfield includes studio, one-bedroom and two-bedroom units ranging from about 600 sq. ft.  to more than 1,100 sq. ft. The development has earned LEED silver certification for energy efficiency. Among its amenities are an attached garage, dog run and pet-wash station, built-in gigabit Internet connections and a bike workshop.

Keeping the vibe in Clifton

While the Whitfield is a big investment they hope pays off, the Taylor brothers made clear that their underlying motivation remains the vitality of their home neighborhood. They repeatedly cited the need to preserve Clifton’s unique vibe — “It’s a Bohemian culture,” Rob Taylor said — and correspondingly unique mix of small businesses.

“We live here,” David Taylor said. “We’re going to run into our tenants at the store. We’re not just the landlord; we’re your neighbor.”

Keeping Clifton vital has been a tall order in recent years, as the U Square development in Clifton Heights transformed four blocks between Calhoun Street and McMillan Avenue with more than a dozen restaurants and nearly as many retail outlets. That’s drawn students who in previous years might have ventured to Ludlow Avenue for a night out. Compound that with the closure of Keller’s IGA and the Clifton library branch’s move a few blocks east of the business strip, and foot traffic along Clifton’s artery has suffered a serious decline.

The Taylors remain optimistic about the district’s future. “I don’t think it’s a crisis,” David Taylor said. He cited major positives among neighborhood businesses, including:

For its part, Gaslight was instrumental in luring Clifton Natural Foods to a building it owns on Ludlow from Clifton Heights, where its former home was demolished for a student-housing development. Clifton Natural’s business has increased sharply since the move, David Taylor said.

The move is an example of Gaslight’s philosophy, he said: Patience pays off in the long run.

“It took a year to get Clifton Natural there,” he said. “We want to bring people to the neighborhood, but we’re willing to wait for the right business.”

Taylor made another big investment in the neighborhood in the fall of 2015 when he bought the building at Ludlow and Ormond avenues that formerly housed the Clifton library branch. “I wanted to control that corner,” David Taylor said. “It’s very important for the business district.”

It cost more than $470,000, and it’s stood vacant for 10 months. There have been discussions with potential tenants, Taylor said, but no deal has been reached. He said that, in the long term, signing the right tenant will be better — both for his business and for the neighborhood — than taking the first offer. (For the record, he’s hoping for a bar and restaurant that won’t duplicate the street’s already wide offerings.)

If the Whitfield is any indication, it’s a solid approach. Gaslight owned that land for about a decade, Taylor said, before market conditions warranted construction.