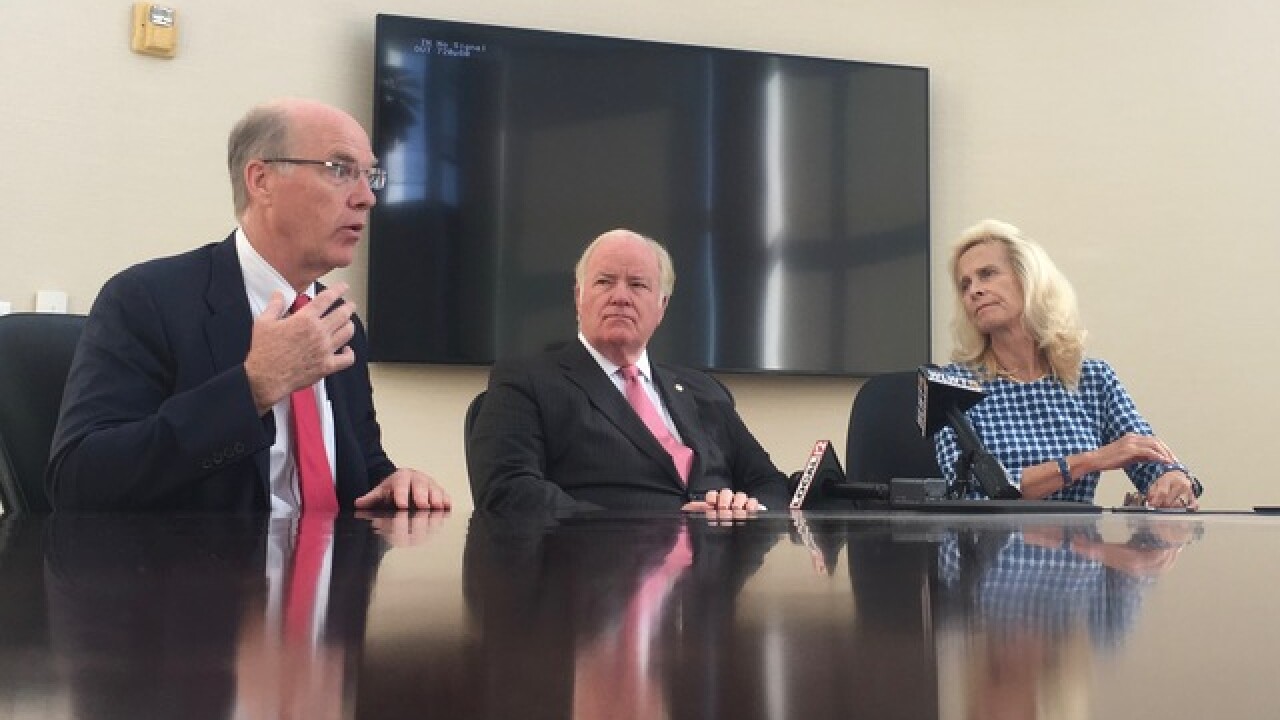 Copyright 2018 Scripps Media, Inc. All rights reserved. This material may not be published, broadcast, rewritten, or redistributed.
<p>Dr. William Barrett, left, briefs the media with John and Eileen Barrett.</p>

CINCINNATI - The quest to make Cincinnati one of the nation’s best places for cancer treatment has reached more than 60 percent of its $100 million fundraising goal in advance of a broader public campaign launch later this month.

Ride Cincinnati is one of the ways Barrett’s family is trying to beef up the region’s cancer-fighting efforts in order to win the National Cancer Institute’s designation as a “comprehensive cancer center.”

The designation could bring tens of millions in new research funding to the region, providing new treatments and specialty care that doesn’t exist now.

“The overwhelming goal is that in Cincinnati we have cancer care that’s second to none so nobody has to leave town for the very best care,” said Dr. William Barrett, John’s brother, who is director of the University of Cincinnati Cancer Institute. “I think the community is really embracing the challenge of making Cincinnati a destination for cancer care.”

There are 70 NCI-designated cancer centers in 36 states, including comprehensive centers in Columbus and Cleveland. Comprehensive is the highest level awarded by NCI, reserved for academic centers with robust research and clinical care in which different medical disciplines collaborate to find new ways to treat patients.

Cincinnati has been working toward an NCI designation for more than a decade, with researchers from UC and Cincinnati Children's Hospital Medical Center collaborating to formally prepare an application for NCI designation as early as next year. The quest took a big leap forward in 2015 when John Barrett announced the $100 million fundraising initiative at the annual meeting of the Cincinnati USA Regional Chamber of Commerce.

In an interview Friday, Barrett said he was hoping corporate donors would contribute at least half of the $100 million goal prior to the campaign’s public launch, but it’s now approaching $65 million. A Sept. 29 event at Great American Ball Park will be the starting point for the broader public campaign, targeting foundations and individual donors.

Barrett is co-chairing the campaign with John Hayden, former CEO of the Midland Co. His family donated $2.1 million to the cause in 2014. Barrett said they've approached about 20 companies since 2015, securing commitments from at least ten.

“We’ve had great reception,” Barrett said. “The community knows this is important.”

Ride Cincinnati is also on the rise, thanks to increased involvement by Eileen Barrett, John’s wife, who survived a bout with cancer 18 years ago.

“I’m so grateful for the treatment I got at UC,” Mrs. Barrett told reporters Friday. “I kept trying to figure out ways to thank them.”

Founded in 2007 by the family of cancer victim Marlene Harris, Ride Cincinnati raised $2.8 million in its first 11 years, according to its website. This year, the Barretts sought advice from Tom Lennox, founder and former CEO of a Columbus cycling event called Pelotonia. It raised more than $18 million for cancer research this year.

“We don’t have a ceiling on what we want to raise,” he said.