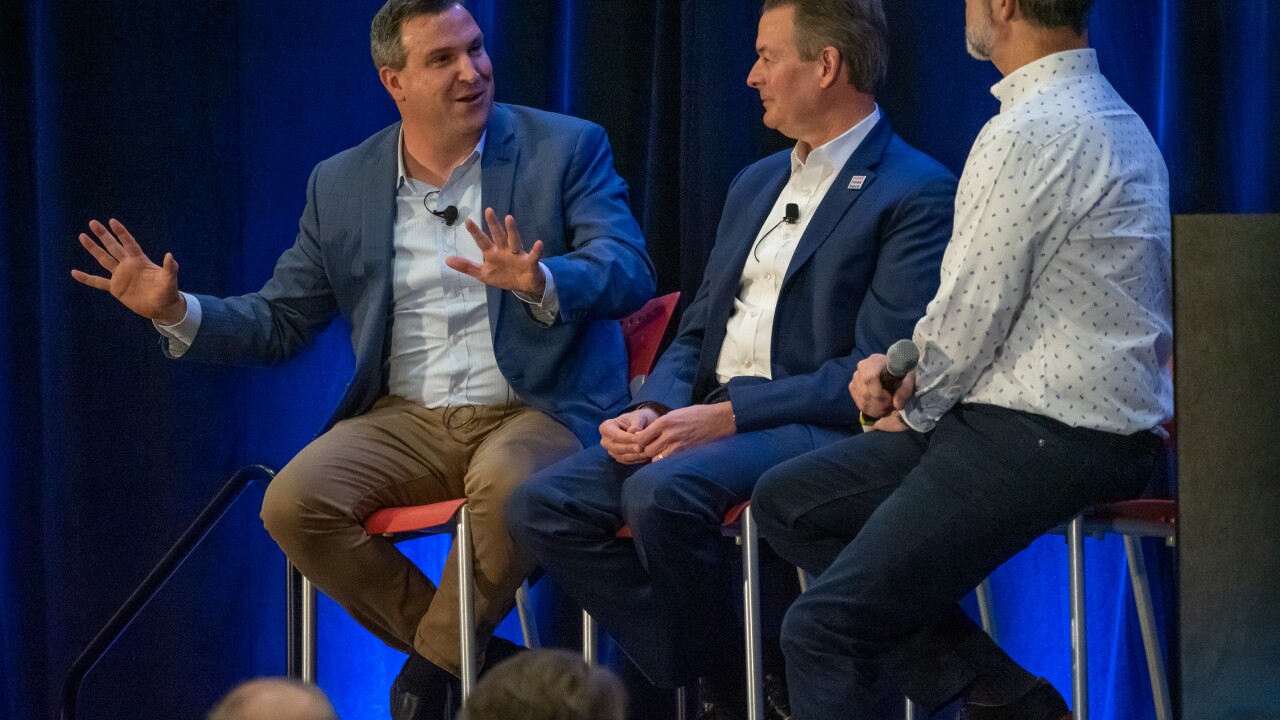 jay Yocis Jay Yocis
Pete Blackshaw, left, was a panelist at the Greater Cincinnati IT Symposium in Sharonville 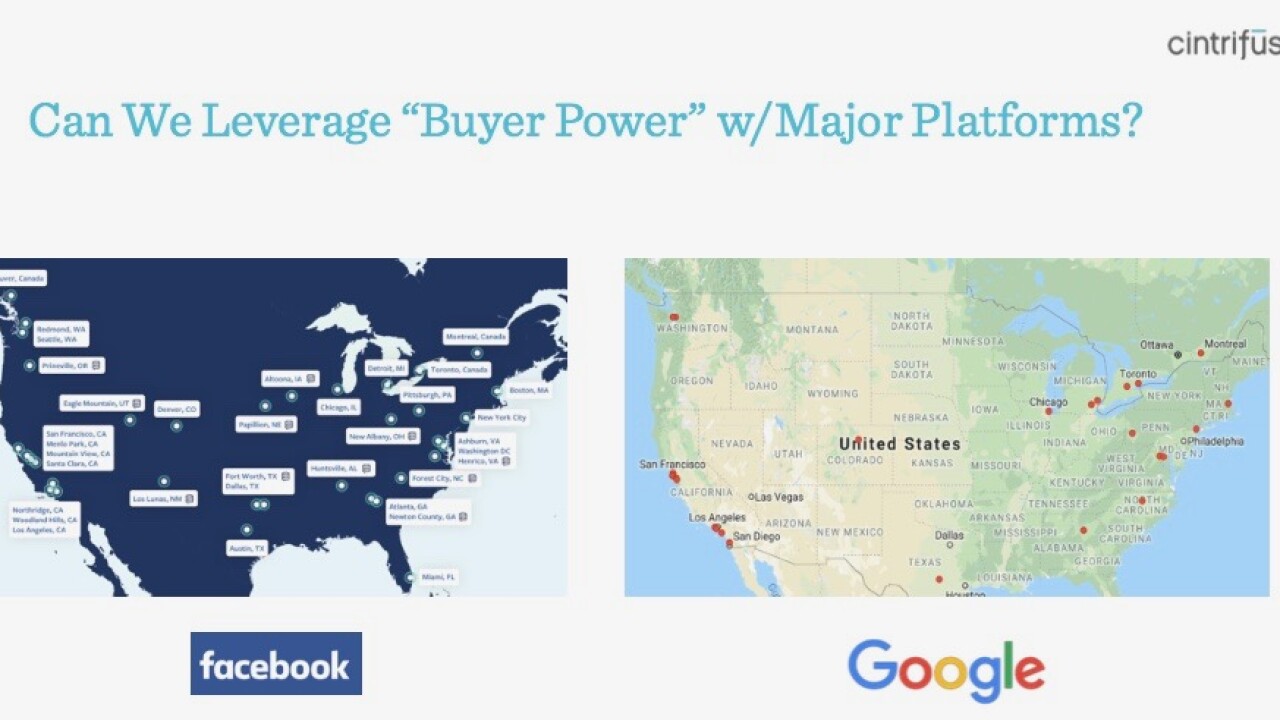 CINCINNATI — Facebook is building a $750 million data center near Columbus. Facebook and Google employ hundreds of computer science experts in Pittsburgh. But in Cincinnati, home to some of the nation’s biggest advertisers, neither company has set up shop.

“We need to leverage our buyer strength to get more co-investment from the platform partners,” Blackshaw told the Greater Cincinnati IT Symposium at the Sharonville Convention Center Dec. 6. “We’re one of the biggest advertising markets anywhere and there are very few bodies from Facebook, Twitter, Google.”

Blackshaw is a former Procter & Gamble Co. executive who returned to Cincinnati in November after a nearly eight-year stint in Switzerland as global head of digital marketing and social media for Nestle. Since taking the helm at the Over-the-Rhine based startup enabler Cintrifuse, Blackshaw has argued in a series of public appearances that local job growth by tech giants would enhance Cincinnati’s credibility as a good place for California’s venture capital firms to invest in startups.

“I will be incredibly disappointed if we can’t at least double (to roughly $300 million) the amount of external VC money into the region,” Blackshaw told the Sharonville gathering of technology professionals. “Three states in the U.S. are drawing 75 percent of all the VC money and I’ve seen the numbers and they’re not where they need to be.”

“I welcome their strategy,” said Kimm Lauterbach, president and CEO of REDI Cincinnati. “I certainly think we have really strong proof points as to why we would be a great location for those types of companies.”

Cincinnati is home to some of the world’s biggest advertisers, including P&G, which was recently overtaken by Samsung as the world’s largest. P&G spent $10.5 billion in 2017, according to Advertising Age magazine.

Macy’s Inc., Kroger Co. and Luxottica, which operates a North American headquarters in Mason, all rank in the top 150 on the Ad Age list of top advertisers in the U.S., with a combined $2.5 billion in 2017 spending.

In an interview with WCPO after his speech, Blackshaw suggested P&G and Kroger might be able to influence those Silicon Valley titans the way Walmart leans on vendors to locate in Bentonville, Arkansas.

"This is an area where we need to be less nice," he said. "There are new players coming in. Alibaba, should we have a plan for that? Probably. But you don't have to swing for the fences and get Amazon (HQ2) here. There's a lot of value creation in the middle."

Facebook and Google did not respond to WCPO’s inquiries. Twitter said via email that it’s had employees here since 2011. P&G spokesman Damon Jones said Google also has Cincinnati-based employees. But he added that the company tries not to let external factors enter into its business relationships.

"Yes, we would like Facebook to come here," he said. "But we also spend a good amount of time with them on the coasts," where P&G's biggest advertising agencies are are based.

Similarly, Macy’s has a San Francisco hub where a lot of its digital marketing talent resides. Kroger has its own data-mining subsidiary, 84.51, based in Cincinnati.

Lauterbach wouldn’t say whether REDI has approached Facebook, Google or Twitter about establishing larger operations here. Instead, she pointed to Kroger’s joint venture with the British grocer Ocado as an example of how Cincinnati is already using technology talent to attract cutting edge companies. Kroger and Ocado are building up to 20 automated warehouses to deliver online grocery orders in the U.S. The first of these robot-powered warehouses is planned in Monroe.

Additional technology partnerships could flow from the development of an innovation district in the Reading Road corridor.

“One of the things I’m most excited about as we look to 2019 and beyond is our partnerships with the University of Cincinnati and the 1819 Innovation Hub,” Lauterbach said, referring to the renovated Sears store at 2900 Reading Road where UC students will work with local companies to develop drones, virtual reality tools and other technology.

“Our ability to grow that district is a direct way to compete for, attract and retain that talent, which ultimately we know will be the driving decision factor behind these platform company decisions,” Lauterbach said.

Blackshaw said Cincinnati should be looking to develop new areas of expertise in digital marketing that build on its reputation as a city that knows how to influence consumer behavior.

“Google is really getting into augmented reality and doing a lot of work in voice. So too is Amazon,” he said. “If Cincinnati were to plant a flag and say we’re going to be the leader in multi-sensory experiences I think there’s a very good chance that these platform partners that have thousands of engineers and employees would look kindly upon some level of co-investment.”

That’s how Pittsburgh became a destination for Google, Facebook and Uber Inc., all of which recruited students and faculty from Carnegie Mellon University to develop driverless cars and artificial intelligence tools. Such cutting-edge talent made Pittsburgh a finalist for Amazon's second headquarters. After all, Amazon ultimately chose two regions for HQ2, New York and northern Virginia, because neither alone could provide enough tech talent.

Meantime, the New York Times reported in May that Carnegie Mellon faculty are being offered up to three times their academic salaries to jump to the private sector.

“It is worrisome that they are eating the seed corn,” Dan Weld, a computer science professor at the University of Washington, told the Times. “If we lose all our faculty, it will be hard to keep preparing the next generation of researchers.”

The leader of UC’s 1819 Innovation Hub said Cincinnati doesn’t need to specialize in order to fuel job growth in the tech sector.

“If we talk to an insurance company, the problems they have are multi-dimensional,” said David Adams, chief innovation officer and CEO of the UC Research Institute. “Instead of being a solution looking for a problem we’re very much working to listen to what the particular needs of those businesses are and then bring the resources together to support what they’re trying to do.”