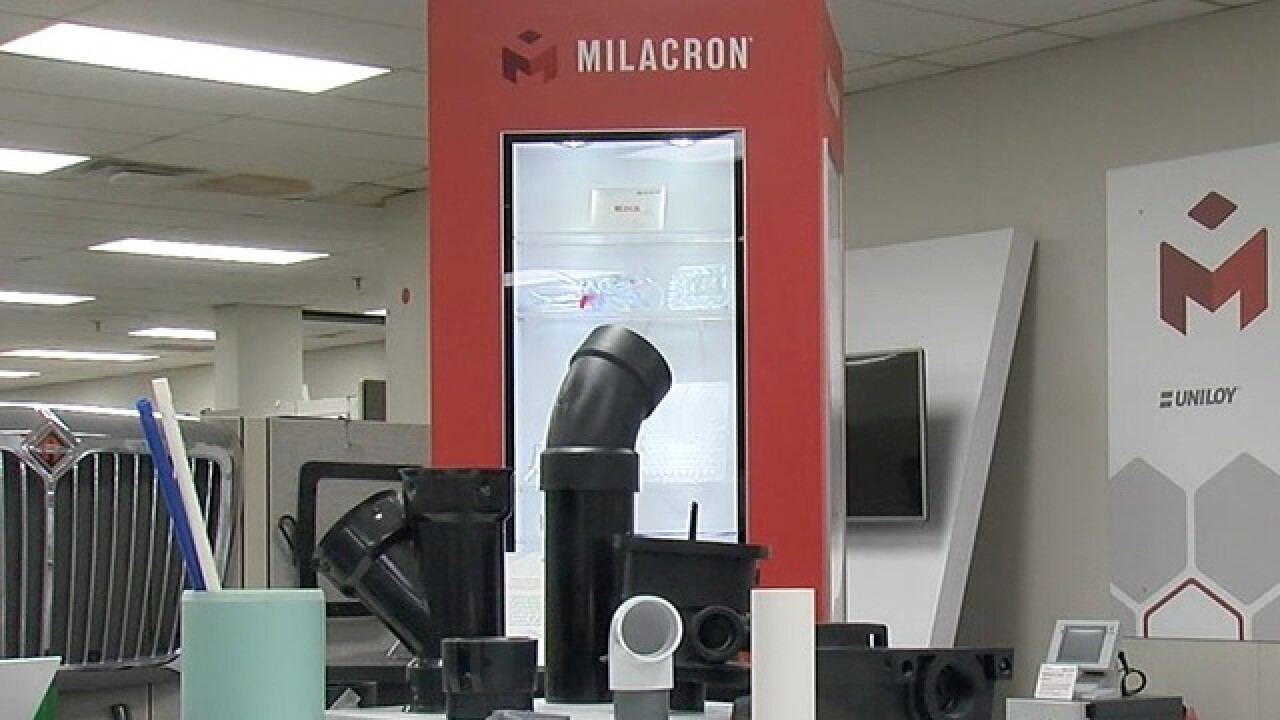 Milacron machines are used to make dozens of plastic products

A 19th-century casket maker, John Hillenbrand never could have imagined the day that the company he started would grow into a Tri-State manufacturing giant, or that it would buy out another Cincinnati business giant in an estimated $2 billion deal.

Now Hillenbrand Inc., which started building wooden caskets in Batesville, Indiana, in 1906, is buying Milacron Holdings Corp., founded in 1860 as one of Cincinnati’s legacy machine-tool makers, the companies announced Friday. Both have become world leaders in plastics - Hillenbrand in manufacturing and Milacron in processing.

The combined company said it expects to generate annual revenues of approximately $3 billion and free cash flow of greater than $325 million by 2021.

The companies also announced they would try to eliminate $50 million in combined corporate costs in the three years after the deal. That could mean job eliminations, but the companies did not offer specifics on job cuts in their regulatory filings.

The agreement calls for Milacron stockholders to receive $11.80 in cash and a fixed exchange ratio of 0.1612 shares of Hillenbrand common stock for each share of Milacron common stock they own. Based on Hillenbrand's Thursday closing price, the implied cash and stock consideration for Milacron stockholders is $18.07 per share, representing a 34% premium to Milacron's Thursday closing stock price and a 38% premium to Milacron's 30-day volume-weighted average price, according to a release.

The deal includes including net debt of approximately $686 million as of March 31, 2019.

Both companies have taken great leaps in diversifying over the years, though Hillenbrand still owns the original Batesville Casket Company that John Hillenbrand purchased in 1906.

Milacron began as the Cincinnati Milling Machine Company and became the country's largest machine tool builder by the mid 1920s. In the 1970s, it was reincorporated Milacron. Now Milacron machines make dozens of plastic products.

According to a release, acquiring Milacron “represents a pivotal step in Hillenbrand's vision to become a world-class global diversified industrial company by adding new strategic businesses in hot runner systems and injection molding to Hillenbrand's portfolio through Milacron's leading brands, including Mold-Masters and Milacron injection molding.”

Likewise, Milacron manufactures, distributes, and services engineered and customized systems in the approximately $30 billion plastics technology and processing industry, as well as fluid technologies and processing systems, according to a release.

The transaction is expected to close in the first calendar quarter of 2020.

“This transaction meaningfully transforms our portfolio and product offering by adding Milacron’s leading technology solutions and sizable installed customer base to help us drive long-term growth. Milacron aligns with our profitable growth strategy and acquisition framework and we expect the additional capabilities from its high-performing segments to accelerate free cash flow generation and improve margins across the business. I have great respect for Milacron’s talented employees and look forward to welcoming them to Hillenbrand as we embark on this next step in our strategy and create enhanced value for our shareholders, customers, employees, and communities.”

“After careful review, our Board unanimously concluded that a combination with Hillenbrand represents a unique opportunity to provide Milacron stockholders with significant and immediate value and the ability to benefit from the upside potential of the combined company. Hillenbrand has a tremendous track record of growing and driving value across its portfolio of highly engineered products. Together, we will continue to provide customers with breakthrough products and customized systems. This combination is a result of the Milacron team’s tremendous progress in enhancing our position as a global leader in plastics technology and processing. I am confident we have found a strong partner in Hillenbrand and look forward to a seamless transition.”