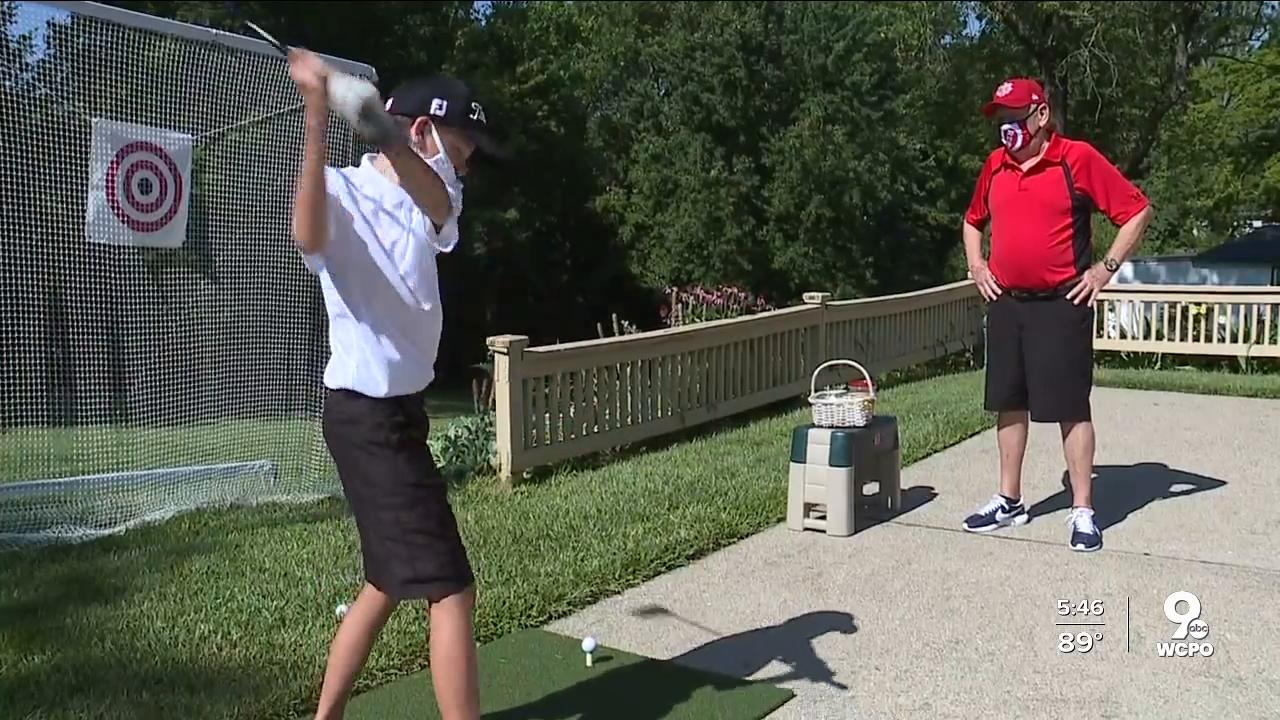 When coaching gets in your blood, it’s something that stays with you, and for 84-year-old Dan Wolterman, coaching is in his blood. He's been helping a group of kids work on their golf game -- free of charge. Call it a pandemic pastime.

CINCINNATI — When coaching gets in your blood, it’s something that stays with you, and for 84-year-old Dan Wolterman, coaching is in his blood. Over the years he led golf and basketball teams at places like Seton and Roger Bacon. He’s currently waiting for one of his great-grandkids to play so he can make a comeback.

But here’s the thing – he already has – right in his own backyard.

Wolterman has been helping a couple neighborhood kids work on their golf game. Call it a pandemic pastime.

“Why do you think they call it a wormburner?” Wolterman asked 9-year-old Brynn Meiners. “Because it went on the ground and any little worm is gonna get killed – so it’s a wormburner.”

Even though he’s used to coaching high schoolers, Wolterman said he’s willing to share his years of knowledge and know-how right from his own backyard – and he isn’t charging a dime.

“Absolutely not,” Wolterman said. “They just have to put up with my sick sense of humor and everything else. I just love working with kids.”

The lessons started in a socially distanced gathering in West Price Hill. Eleven-year-old Holden Meiners brought his clubs. Holden’s dad, Ben, was there, too.

“I kinda caught wind he knew a little bit about golf,” Ben Meiners said. “We just moved to the neighborhood.”

Sharing a love of the game isn’t something any of them take for granted.

Even at 11, he’s old enough to understand their lessons and Wolterman’s coaching are about something bigger than a game. It’s about making a connection.

“Raising nine kids, you just get into the spirit of it and it’s hard to give up,” Wolterman said. “I enjoy doing it and I hope I do it well. I won’t guess on the number of years I’ve got left.”

Maybe coaching is his way of staying young.

Except for his lifelong golf buddies, of course.

“You know, other than that, I’m never around old people – excuse me – (my) wife is over 30,” Wolterman said, laughing.

The couple has been married for 50 years.

Wolterman said he hopes the Meiners learn that golf is a sport they can take with them for life. He said it continually teaches life lessons: when you hit a bad shot, you have to learn to live with it, realize you can do better next time, and then appreciate when you do well.