Home Tour: Wyoming mid-century house on a creek was perfect for two ‘wild and active' boys 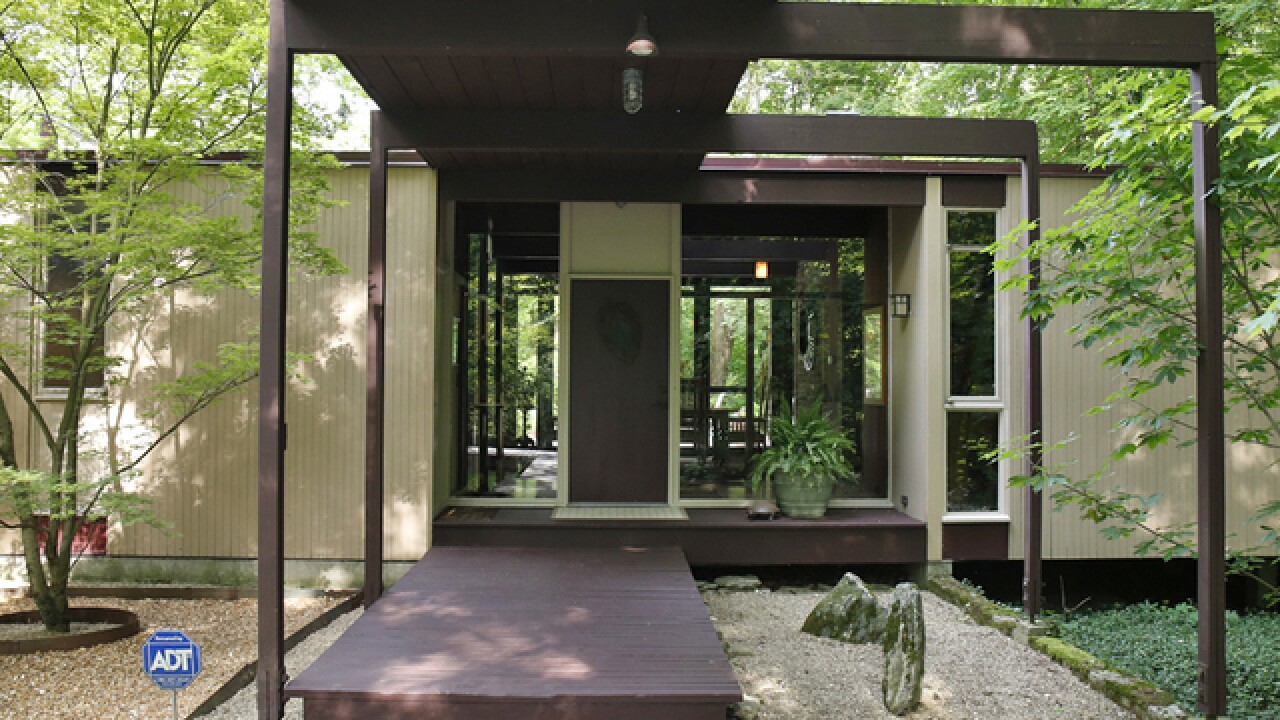 Gary Landers
<p>From the front entrance of the Wyoming home of Tim and Carrie Hinde, you can see through to the woods in the back, a feature that is repeated throughout the home.</p>

WYOMING, Ohio -- It’s hidden, it’s small and it’s a gem of a home for a couple or small family who love the woods and waterfalls, plenty of privacy and mid-century styling.

It will be difficult for Tim and Carrie Hinde to leave behind, but the Wyoming empty-nesters are ready to downsize into a Downtown condominium and are on the brink of selling their West Galbraith home designed in 1956 by one of Cincinnati’s leading modern architects, Richard Wheeler.

No more coffee or glasses of wine with the trees on the back deck. No more parties centered in the open kitchen they remodeled 11 years ago. No more jam sessions or late nights listening to the stereo in their music room. No more hanging out around the wood-burning fireplace where, 17 years ago, the Hindes first realized they could give up their beloved Craftsman home in Norwood and move.

Carrie vividly remembers the “aha” moment they had while enjoying a friend’s party in the Wyoming house. They had never considered living in a mid-century home, but their attraction to this place was strong and mutual.

“For me,” Tim said, “it was kind of about the woods. I saw a lot of value in nature and being part of it.”

“We had two young boys — crazy, wild and active,” said Carrie, who met Tim while in high school in his hometown of Toledo but grew up mostly in rural Indiana. “They were in Scouts and very much campers, so I thought it would be a great way for their generation to grow up like we did, coming home for dinner after having adventures the whole day.”

Carrie especially liked the size of the kitchen and how open it was to the family room that long ago had been two bedrooms.

“This open floor plan really nailed it for me. I could just envision everyday life here. It’s atypical of mid-century homes — not a galley kitchen — so I’m not left out even in cleanup because (the family) would see me and help out,” she said.

Tim said he likes that many of the walls between rooms in the house stop a couple of feet short of the fir-paneled and beamed ceiling.

“One thing about this house is that sound moves through it in a very cool way,” he said.

“In the back room, when you play music, you turn it up and it captures you. The next thing you know, it’s 4 a.m.,” Carrie added.

The couple, whose boys are now 26 and 28 and out of the house, want to live as close to the Ohio River as they can get. Even though their current house is just 1,788 square feet and has only two bedrooms (they’ve used the basement’s large recreation room as a third), they want a smaller place where Carrie can be close to work at Hamilton County Municipal Court and Tim, who is a Realtor, can be closer to the Cincinnati neighborhoods in which he makes most of his sales.

“I don’t want to spend 80 minutes in my car every day anymore,” Carrie said.

The house Wheeler designed for Cleveland Wrecking Co. Vice President Sidney Pranikoff is set back and down from West Galbraith Road among mature trees growing along Congress Run Creek directly behind the house.

Mid-century illustrator Charley Harper was a near neighbor, and this pocket of Wyoming is a haven for mid-century homes designed by venerable architects such as Ray Roush and Ben Dombar.

The Hindes had never considered living in a modern house, and initially, Carrie had several concerns. She worried that the flat roof would leak. She thought the home’s lack of natural gas and its “lovely large windows” and glass doors might equate to monster energy bills. They didn’t, and she got over it.

A thick wall of trees and shrubs hides the driveway that comes off a rolling stretch of Galbraith Road between Vine Street and Winton Road. Visitors approach the house from its side and get to the west-facing front via a suspended wooden walkway, below which are the original bricks.

The house is sided with vertical boards of tongue-and-groove redwood, and its wooden front door is flanked by a wall of windows that provide a view through the entry hall and dining room to the east-side patio and yard.

Natural wood is featured through the interior of the house: kitchen cabinets, fir ceilings, oak floors, redwood accent walls in the entry hall and dining room. Glass walls and windows abound, as they do in all mid-century modern homes, letting in natural light in every corner of the house.

Turn right from the hall into a 20-foot-wide living room the Hindes call their music room. It features a central brick fireplace that’s exposed to the dining room on the other side. The bricks, Tim said, were salvaged from a downtown building taken down by Pranikoff’s wrecking company.

A door in the middle of the back wall of windows leads to a suspended 6-foot-deep wooden deck that is the width of the house and faces Congress Creek Run and the shale hillside behind it.

“There is this kind of cool thing that is directly across (from the deck) where the rocks are. It becomes a waterfall when it rains,” Tim said.

The hilly part of the property, which comprises almost 0.6 of an acre of the 1.5-acre property, is located in Springfield Township, not Wyoming, so the couple pays two property tax bills. The mostly-dry creek and a flat area along it were a perfect place for the Hindes’ sons to hold their paintball wars, the couple said.

Straight ahead from the front door is an open-framed wall that divides the hall from the dining room. Off the dining room is the kitchen, which had been galley-style but was remodeled by previous owners to open it to the family room they created on the Galbraith Road side of the house.

Also built decades ago is the wing east of the family room. A short hall leads to a full bathroom and bedroom. There are mid-century-style storage cabinets above sliding closets in the bedroom and above the bathroom’s double-vanity and mirror.

Even more storage — this time shallow shelves — is located behind sliding doors in the hall that separates the kitchen from the master bedroom and bathroom on the west side of the house.

A swinging door closes off the master suite, which features the original shower stall but otherwise has been upgraded. The Hindes added a large contemporary wardrobe in their room. Their king bed is between it and a two-paned window that brightens the room.

That natural light, particularly the moonlight that slivers in through the trees and flashes on the windows, has inspired several songs written by Tim. One, called “Bedtime,” came to him while he was lying in bed on an especially bright night.

That kind of experience the Hindes have had in their Richard Wheeler home is going to be hard to duplicate — and give up. But with a sale of the property pending (asking price is $289,000), separation from their home of 17 years is imminent.