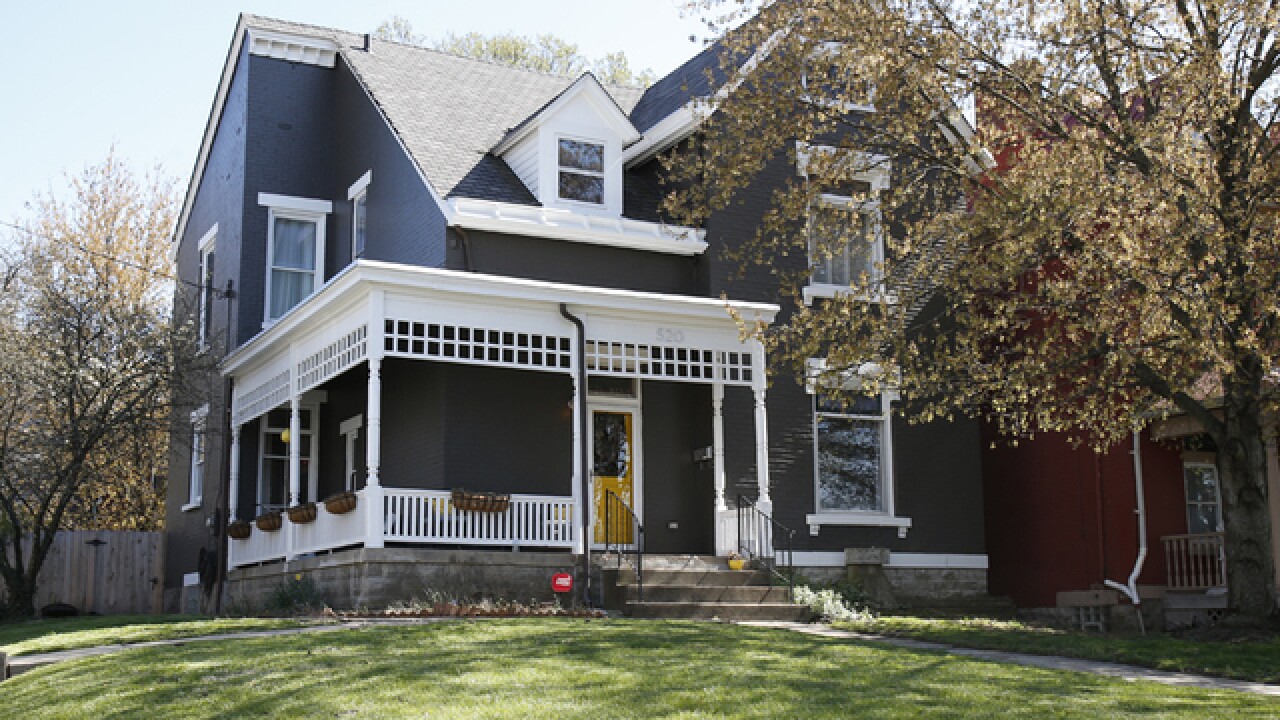 Gary Landers
<p>Sherri Barber's Bellevue, Ky., home is part of an April 24 promotional showcase of 12 properties called Beyond the Curb, organized by the nonprofit Catalytic Funding Corp. of Northern Kentucky.</p>

BELLEVUE, Ky. -- Sherri Barber and Ben Baker are part of a new wave of urbanites buying homes in the Campbell County river cities of Bellevue and Dayton, respectively. And they are loving it. Their homes and their stories — similar yet distinct — will be part of an April 24 promotional showcase of 12 properties called Beyond the Curb, organized by the nonprofit Catalytic Funding Corp. of Northern Kentucky.

Barber, an independent boutique and lifestyle photographer whose work has taken her to exotic locations as far away as Hong Kong and Prague, owns what longtime Bellevue residents call The Grandview House on Grandview Avenue. The 2,400-square-foot, 19th-century house is larger and older than most of its neighbors and boasts a Cincinnati skyline view from its porch.

Her two-year effort to give the former orphanage a facelift is paint-brush strokes away from being ready for the tour. The 1½-story corner house is decked out in Barber’s contemporary color scheme of dark gray and white with a splash of canary yellow. Its chic interior design was inspired by all the modern resources Barber could possibly use: Instagram, Houzz, Wayfair, Craigslist, IKEA, etc.

Baker, an IT specialist in downtown Cincinnati and a first-term councilman and vice mayor of Dayton, owns an 1895, 2½-story brick Victorian on what Dayton residents refer to as The Avenue, the town’s main drag whose official name is Sixth Avenue or KY 8. The front of the architecturally stunning house is decked out in a colorful coat of new paint featuring a light mossy green field with rich rust and light mustard yellow accents.

The inside of the house Baker has owned for six years is a work in progress, most notably the 120-year-old spindled staircase he has been stripping in hopes of having it ready nine days from now but for which, he said, he’s going to have to hire a professional to finish. Meanwhile, like Barber, he plans on wielding a paint brush in the wild dash to the April 24 tour deadline.

The two 30-something homeowners will be part of a six-hour self-guided tour designed to show the potential Bellevue and Dayton hold to become an urban haven — close to restaurants, unique shops, the Ohio River and downtown Cincinnati. Among the 12 locations on the tour are new construction, both single-family homes and multi-story condominiums, and older stock homes and buildings that include a church that has been converted into a bed and breakfast. The Catalytic Fund and its supporting sponsors have held similar events in Covington and Newport.

The Northwest High School graduate has a degree in electronic media from the University of Cincinnati. Her business is located in Walnut Hills and she lived in Over-the-Rhine for about 10 years before starting to search for a more suburban-like place to live.

“My three dogs had never seen grass, and I didn’t want my car broken into any more,” Barber said.

Her search began across the Ohio River, specifically in Covington’s popular East Row and Newport’s Mansion Hill districts. She said she got outbid on seven homes, began searching for better value and found it in Bellevue. She paid $169,000 for Grandview House, has put about $35,000 into it and recently received a $305,000 cash offer to sell. She said she won’t budge until she has remodeled the wonky-but-large attic into a master suite, raised the back side of the slanted roof on which to build a lookout deck and received an offer in the $400,000s.

“The more I live here, the more I get to know the neighborhood, the more I love it,” Barber said. “Bellevue’s not there yet, but people in OTR with kids are ready to move on. They’re ready to raise families but don’t want to leave the city.”

Barber’s find was an especially good one, she said, because most of what it needed was cosmetic repair of unsightly details, such as walls painted baby blue and hospital green. Her big project was updating the kitchen. She gutted the room herself, stripping its linoleum floor, then sanding and refinishing it.

She exposed a brick wall and its inset, stained-glass cabinet, had an electrician install pot lights in the original tin ceiling and had the room re-plumbed. Once gutted, she equipped the kitchen with honed marble countertops and a 6-foot by 8-foot island, a stainless-steel farmhouse sink — bought at a closeout price from Wayfair.com — and stainless-steel appliances and creamy white box cabinets from IKEA that have custom doors and pulls by Blum. Then she painted the walls medium gray.

The result, Barber said, is a room where people want to hang out.

“I don’t cook, but I have people over all the time and everyone’s, like, ‘I want to cook in your kitchen,’ and I’m all for it.”

Other features of Grandview House that Barber will share during the tour include: original tin ceiling and 33-pane windowed French doors in the boldly-decorated, black-and-bling dining room; jacquard-style walls she painted and stenciled herself; a staircase that features original natural wood spindles, a quarter-cocked, square newel post and a double-sash, stained- and painted-glass window; and adjoining rooms upstairs that she uses as a closest and dressing area.

The Holmes High School graduate has a radio and television broadcast management degree from Northern Kentucky University. His 121-year-old house is more of a work in progress than Barber’s house. There are projects to be tackled in almost every room, and a good part of them are under way as the April 24 tour approaches.

Unlike Barber’s house, Baker’s doesn’t have an official name, although his research indicates it was first occupied by a Dr. Goldberg. He said he is open to calling it Doc Goldberg’s House if need be.

Baker started looking for a house to buy in his early thirties. He said he wanted to buy into a walkable community away from downtown Cincinnati, where he works. He wanted to be near the Ohio River in a neighborhood that had better restaurant options than Latonia, where he was living at the time. The 2,700-square-foot, 3-bedroom, 1½-bathroom Doc Goldberg House fit the bill and his wallet — $73,000 at auction — and was in a perfect location, right on the very street the councilman is helping bring back to its heyday, when Dayton had an amusement park with a roller coaster, a boxing arena and a beach.

“I love being close to the river, to be able to hear speedboats and calliopes going up and down,” Baker said. “The neighborhood is extremely affordable, very walkable. We have a half dozen shops now that weren’t there a year ago. It’s exciting. It’s a great neighborhood.”

Baker’s house was in solid shape when he bought it, despite the fact that it had been in foreclosure. Once part of a trio of abutting brick beauties — all with identical floor plans but different facades whose black-and-white photograph was featured in an Oxford University Press book by Dell Upton titled “Architecture in the United States” — Baker’s place is the easternmost of the two that remain and now sports an artful paint job to rival its next-door neighbor.

Dayton artist Leslie Carr chose the colors and Bellevue’s Mike Schroeder manned a cherry picker to paint the house, which Baker said was impressive to watch. And the preparation was extensive: “There’s more caulk in this building than in a caulk salesman’s house,” Baker said.

Another impressive thing about the Doc Goldberg House is a painted number — 1937 — on the stone basement wall. Elsewhere in the basement and at the same level, the shade of the stone changes. Baker put the evidence together and concluded it showed how high water got into the basement during the great flood of 1937.

“This house has some stories to it. People wrote their names throughout the house, and I wrote my name on it, too,” Baker said.

Those who attend the tour won’t see the glitz Barber brought to her place. This is more of a guy’s place with a mix of new and old furnishings and sports memorabilia. Baker, who is a diehard Reds fan, displays a collection of Reds hats in his bedroom that grows by exactly one every year.

Just above the front parlor’s mantel hangs a bat signed by former Reds first baseman and Dayton native Todd Benzinger. Above that is a drawing based on a well-circulated photograph of Reds players mobbing each other after winning the 1990 World Series. On it are the signatures of 18 players on that squad, Benzinger included, that Baker has sought out over the years.

The parlor — whose door to the entry hall and pocket door to the living room indicate it might have been Doc Goldberg’s examination room or office — boasts what could be called the Marge Schott Memorial Table. On it are a mirrored tray, two mid-century lighters and a couple of ash trays once owned by the infamous Reds owner. Baker bought them and other vintage decorative items at auctions and definitely leans toward establishing an atmosphere you’d find “in a Victorian home with high-speed internet.”

Other features in the house Baker will share during the tour include: an original stained- glass window in the entry hall; original floral-patterned decorative tile around the fireplace; and the sleigh bed of the late Bernie Moorman, who served as mayor in Baker’s hometown of Covington.

Beyond the Curb tickets

Tickets for the 10 a.m.-4 p.m. April 24 tour cost $15 and can be purchased at Manhattan Harbor, 580 Dodd Drive, Dayton, or at www.eventbrite.com. For more information, go to beyondthecurb.org.