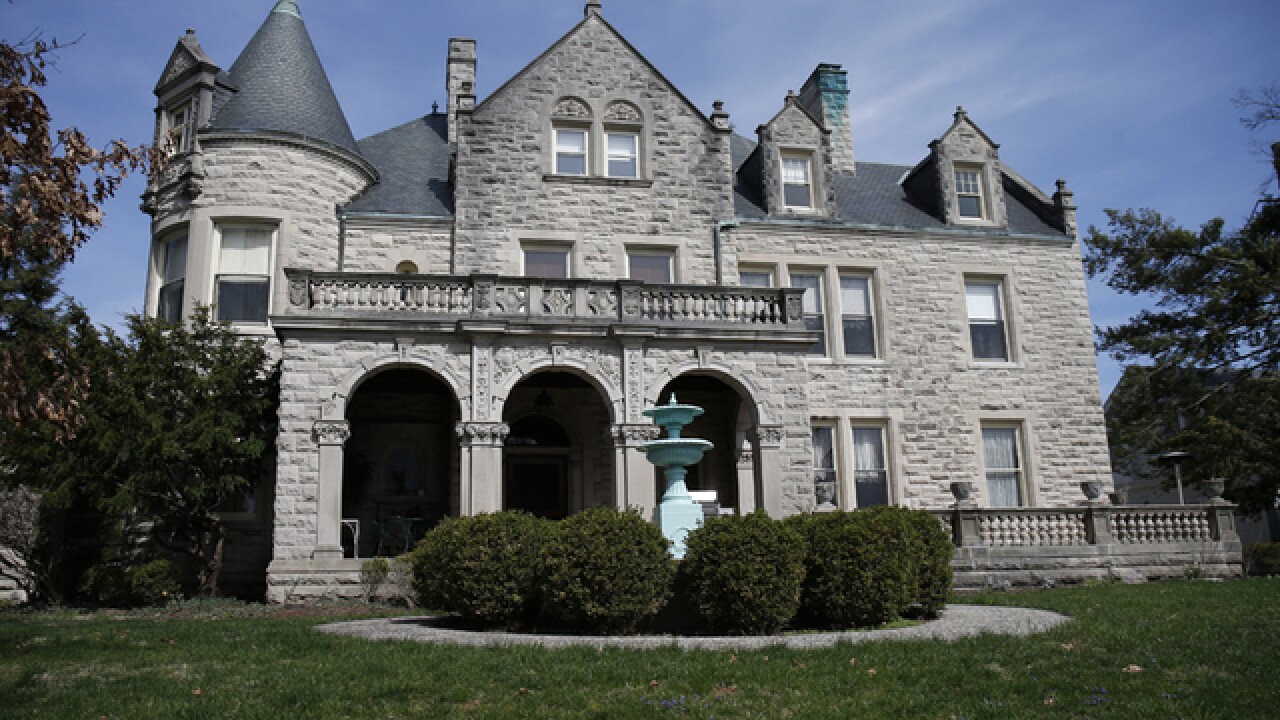 CINCINNATI -- One of region’s lesser-known turn-of-the-century mansions will have its coming-out party May 7 when the Cincinnati Preservation Association holds a home tour at the 1902 estate of tobacco baron Napoleon DuBrul and three more modern homes in the secluded Raeburn Drive neighborhood of Mount Airy.

Cincinnati movers and shakers gathered often for social and political functions at the 9,643-square-foot, 24-room limestone mansion know as Cote Bonneville over its 114 years, but the CPA is giving the public its first shot at seeing it and its stunning hillside vista.

Mercy High School and Xavier University graduate Bobbi Blum grew up in the three-story mansion that her parents, Michel Tire Co. founders Tony and Roberta Michel, bought in 1978. Bobbi and her husband, construction company owner Trey Blum, live there with two of their four children and are in the process of buying the house they’ve occupied for 10 years.

Bobbi said that as a girl she served so many famous Cincinnatians during political parties held in the DuBrul mansion that she struggles to remember their names.

She has a scrapbook of memorabilia dating back to the early days that contains party lists with important family names such as Werk, Baldwin and Schoenberger. And she proudly shares a collection of modern ephemera that includes a half-dozen wine labels from Washington State’s DuBrul Vineyard that feature images of the Dubrul estate. Appropriately, Blum calls the Cote Bonneville Winery products her “house wines” and stocks an ample supply to share with guests.

Though just a fraction of its original acreage, the 6-acre gated property still includes the well-preserved mansion, a 5,000-square-foot carriage house, an in-ground pool, a Roman-style pergola and a recently painted fountain bought by the Michels that sits front-and-center of the front porch view of the Mill Creek Valley and downtown Cincinnati in the distance.

‘Edge Of The City’

Guests approach Cote Bonneville -- which means on the coast or edge of the beautiful city in French -- from the street to the back of the house, to the left of which is the carriage house/garage and pool. More than a half-dozen vintage gas lights ring the house, which was once engulfed in a thick forest but is now a grassy park with towering trees dating back more than 100 years.

The front of the massive house faces the valley and the interchange of Interstates 74 and 75. A 60-foot-wide, triple-arched porch, half of which is covered, runs almost the entire width of the house. The covered half features the original terrazzo tile floor and the other half was re-tiled in a complementary pattern by Trey Blum. Beams crisscross the porch’s bead board ceiling as they do elsewhere in the interior of the house.

Eyes are drawn to an impressive, two-story tower on the west side of the façade. Above its top window carved in a sandstone pediment is the construction date of 1902. Below the window are the overlapping initials of Napoleon DuBrul, similar in style to the logo of the University of Notre Dame, at which one of the DuBruls’ sons won a gold medal at an elocution competition.

Meant To Be Remembered

Around the corner in the west-side porte cochere is more evidence the mansion was built by a substantial person. A three-line inscription in the cornerstone reads: “Cote Bonneville / Napoleon DuBrul / 1902.”

“When he built this house, he wanted it to last and make his mark on the city,” Bobbi said of DuBrul. “He was very proud of it.”

The first floor of the mansion has 12-foot ceilings and wide openings between most rooms that can be closed in by pocket doors. Each has 16 panes of beveled glass separated by mullions that swoop upward at the top. Each room off the grand central hall features a different type of hardwood such as oak, mahogany or cherry. The west-side parlor, however, has trim, low wainscoting and a bench in the tower corner that are made of exotic primavera, a hardwood native to Mexico and several Central American countries.

The wood once extended to the ceiling but was removed by the mansion’s second owners, Bobbi said, in order to brighten the first floor. There are original fireplaces throughout the house -- even in the grand hall which features 1902 andirons. The hallway’s ceilings are coffered like the front porch and there is a built-in bench below an arched bay window on the south side.

Beyond the west-side parlor is a broad hallway that connects the portico to a set of servants’ stairs on the far east side of the house. Bobbi pointed out an interior brick wall visible in the pocket between the rooms as proof of DuBrul’s insistence on building a formidable structure. The gilded egg-and-dart trim around the pocket door speaks to his sense of wealth and artistry.

Beyond the hall is the library. It features -foot-high, built-in cherry bookshelves on either side of yet another pocket door, which is cherry on the library side and oak on the hall side. The room has a four-window bay in the corner and a door to a small terrace decked with the same terrazzo tile as on the front porch.

Cote Bonneville’s formal dining room is in the center of the back side of the house and features mahogany wood, a built-in sideboard, a treasured painted china by Bobbi’s mother, four pressed copper pieces done in floral motif by her great aunt, Girlie Geiser, and a scale replica of the Cutty Sark clipper ship built over a 25-year period by Bobbi’s grandfather, Anthony Michel. The Blums’ artwork includes Ohio River scenes by well-known Cincinnati artists such as Michael Blaser and John Stobart, as well as works by family, including a flowery impressionist painting by Trey’s mother, Barbara Heimann.

Also on the first floor are the grand staircase, a remodeled kitchen, a butler’s pantry with original oak refrigerator and cabinets, a small bar put in by Bobbi’s father, an elevator, a powder room and an oak-trimmed billiards room.

The latter is where DuBrul and his male guests likely retreated after dinner, possibly for cocktails and most assuredly for cigars. The Cincinnati-themed room has a long built-in bench fronting the south wall, a door to the men’s parlor and an original wall cabinet for pool cues. The early 20th-century pool table was made by the National Billiard Manufacturing Co. and features its patented cushions called Itan-Nic-Nic, which is Cincinnati spelled backwards.

Of note on the second floor is the wainscoting, which begins in the servants’ stairwell. It is covered in an 1870s leather-like, embossed material called Lincrusta, which is made of linseed oil and wood flour and was designed to be washable and more durable than leather.

One of the five second-floor bedrooms had been converted to a dormitory-style bathroom by the nuns who occupied the mansion for about 25 years in the mid-20th century. Another was used as DuBrul’s art gallery, Bobbi said.

There are six more bedrooms and two gathering areas on the third floor, as well as steep stairs that lead to the attic and then to the roof from which the Michel family often watched fireworks blasting off in the distance.

The tour will be 1-5 p.m. on May 7 in the Raeburn Drive subdivision in Mount Airy. Tickets are $25 for CPA members, $35 for non-members (same price for all on day of tour), and can be purchased at http://cincinnatipreservation.org/purchase-spring-house-tour-tickets-now/.

Napoleon DuBrul (1846-1916) was a French-Canadian cigar mold inventor and manufacturer who came to Cincinnati at age 26 in 1872 and quickly immersed himself in the burgeoning business community. He and his wife, Liliose Le Gault, had 10 children, six of whom outlived their father.

The DuBruls employed as many as four servants and a coachman, all of who likely lived on the mansion’s third floor. A tenant family and servant lived in the house in the later years of the DuBruls’ ownership.

In 1884, DuBrul, who is best known as the inventor of the classic barn lantern, purchased more than 30 acres and a mansion built by Charles Frederick Adae on a hillside overlooking the Mill Creek Valley, about a mile east of Colerain Avenue and what would become Mount Airy Forest. Adae was an early Cincinnati banker and liquor, wine and tobacco baron who served as a consul for Germany.

DuBrul hired architect William W. Franklin, who was a professor at the Ohio Mechanics Institute, to build a Romanesque Revival mansion on the Adae house’s footprint. Using the same limestone and sandstone materials made popular 30 years before by early mansion builders such as Henry Probasco, Franklin fortified the DuBrul house with concrete and steel so it would last for centuries.

Completed in 1902, Cote Bonneville was built by European craftsmen and had Venetian glass windows, imported mosaic tiles, ceiling murals and all-wood walls in its main rooms. The grounds included a pond, a swimming pool and water tower. Most of those features have been lost to time, but surviving details include carved mantels and banisters, windowed pocket doors, oak and pine floors and an elevator shaft with updated mechanicals.

Liliose sold the mansion to Formica Products Co. co-founder Herbert Faber in the early 1920s. Faber remodeled the interior and upgraded the grounds. Faber went on to build homes on many of the lots on and near Raeburn Drive.