Fairy tale-like front door and tunnels down below 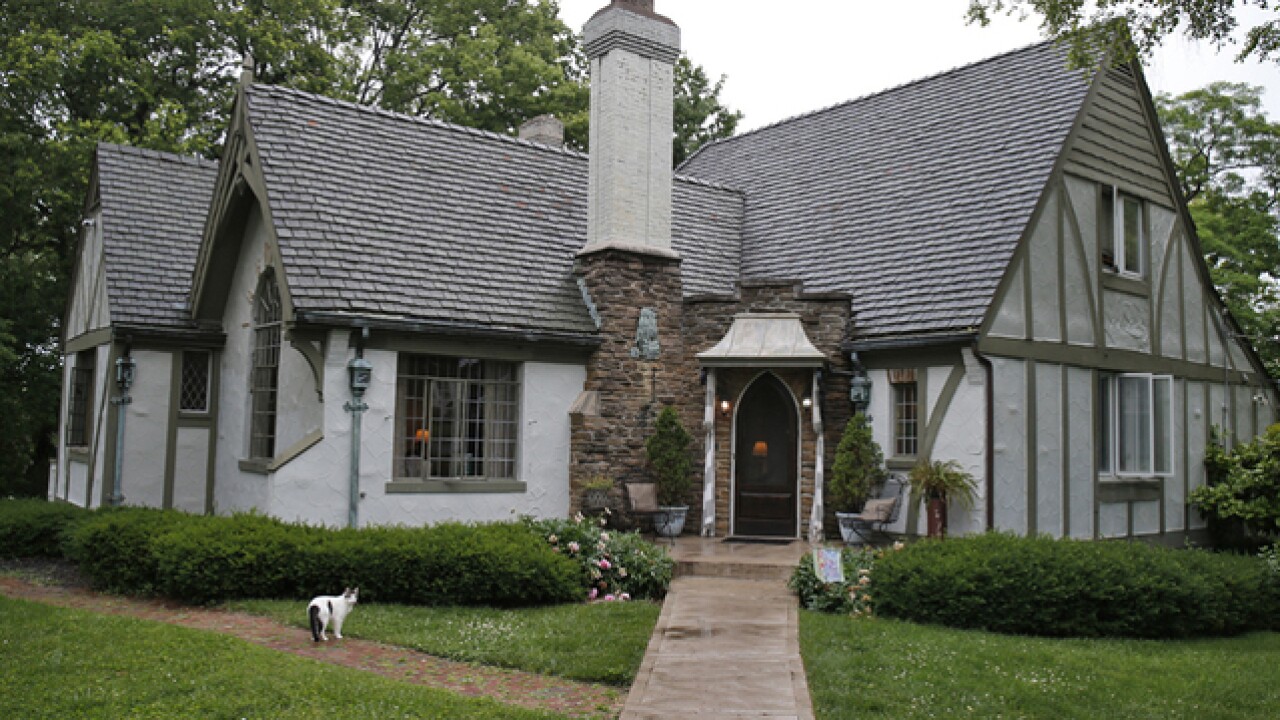 But let’s get into that later.

Our home tour of the 1930 Tudor Revival that he and his wife, Cindy, own isn’t so much about history — or “tour” — as it is about “home.” They would rather sit and rave about how good the house makes them feel or walk from room to room pointing out its Old World details and charming décor than talk about its tunnels below.

Those details and that décor — which includes an iron swinging door between the living and dining rooms, wooden beams across the ceilings, and a Juliet balcony in the vaulted living room — are part of why they love their five-bedroom, four-bathroom, 2,600-square-foot home so much.

The Hoards have lived on one of the prettiest streets in West Price Hill — Ridgeview Avenue —for 23 years, during which they have made few major changes. With journalist Greg on the road for 11 years covering Cincinnati professional sports and then working 14 years of evenings and weekends as a local sports broadcaster, the couple concentrated on their family when they were together, not on altering the home they loved just the way it was.

Cindy, in between rearing her children and freelancing in the commercial production field, did concentrate on decorating the place with vintage and antique furniture, blending it with contemporary and nostalgic touches.

“It’s always been her baby,” said her obviously proud husband. “She has such a knack for making something from nothing.”

The house, which sits on a rare 3-acre city lot comprising several parcels, was last owned by the family of West Side plumber Max Hofmeyer, who was a dear friend of Cindy’s family. The Hoards had twin 3-year-old boys and a 2-month-old daughter, and they needed a home that was a lot larger than the one they owned less than a mile away on Joana Place. They had looked at East Side properties but were discouraged by the asking prices.

“I’m not from here,” said Greg, who grew up in rural Indiana. “So the whole west-east thing was a mystery to me. I was in Houston, and I get this call in my hotel room from (Cindy) and she says ‘I think I found the house.’ As an after thought, I asked, ‘Where is it?’ She told me and I said, ‘Are you kidding me?’”

Cindy had heard from Hofmeyer that he was getting ready to sell his house, Greg recalled.

“I went over to look at it, and I didn’t even come inside.’“

The Hoards gave up their search for a home on the East Side and have never regretted it.

“You know, people often say, ‘Where do you live?’” Cindy said. “And when I was younger, I would kind of be shy about it because people automatically have this stigma. But this is a great old house, a great community. So yeah, I live in Price Hill.”

They’ve considered selling the place and buying a more compact house but haven’t been able to shake the old place they adore.

“We wouldn’t change our house for anything,” Greg said. “The pains, the memories; there’s so much here. We’ve been a family on the go, and she’s put up with it.”

Cindy said one of her favorite times of the year to be in the house is winter. Her spot to read is near the big, west-facing living room window where bright light comes in through its arch and she is warmed by the radiator beneath it.

Greg said he likes the house in winter, too, especially the black-and-white themed porch on the north side of the house off the dining room.

“A lot of people say it is their favorite spot in the house. I’ve written a lot back there. It’s my thinking spot,” said Hoard of the porch, which faces their half-wild, half-landscaped side yard.

“I grew up on a farm — 200 acres. I love walking up and seeing all the sun on the back of the house. It’s like a forest. I get a very peaceful feeling. I love all the green, and there’s privacy from our neighbors.”

Guests enter a fairy tale-like front door into a small hall off of which is an original powder room. Inside the living room, they immediately see how Cindy has filled the house with vintage and antique furniture as well as contemporary and nostalgic decorations. She did it all with utility in mind.

“One of my favorite things is this antique butcher block I bought at an auction,” she said while giving what serves as the small kitchen’s island a little hug. “I love, love, love it and use it every day.”

The Hofmeyers, she said, made several major changes to the home. They added air conditioning to some of the rooms, resulting in a drop ceiling in the kitchen they updated. Cindy said she’d like to open that space back up and make the entire kitchen over, “But it would take $35,000 to do it.”

The former owners also knocked down a wall between what had been a back bedroom and the kitchen, creating a family room where three or four people can gather to converse or watch television and look out to the backyard garden with its tool shed, inglenook-style stone fireplace and sealed brick well.

The only addition made to the house is a full bathroom off the master bedroom in the southeast corner of the house. It features two pedestal sinks, his and her mirrors and black, taupe and white tile.

Other than the master bathroom and a kitchen update done years ago, the house is pretty much as it was when it was built in 1930. The living and dining rooms, in particular, still sport Old World charm: lionhead crest in the plaster over-mantel; art-tile hearth; and artistic iron curtain rods above large casement windows, one with inset metal cutouts of a female archer and a large-antlered deer.

“I feel like it’s a little cottage out of Germany or maybe out of England,” Cindy said. “It’s comfortable. I feel like it’s inviting. You don’t have to be too stuffy in here. … It feels so loved.”

Two 5-foot-high tunnels — now sealed — lead out to the backyard from below Greg Hoard’s basement office. Given that Hoard’s home was owned for more than 20 years by hotelier Anthony C. Elsaesser and that Prohibition bootlegger George Remus lived on a vast estate right up the street, could there be a connection?

“The rumor is that Elsaesser kept booze down there for Remus,” Hoard said of the tunnels. “There was an old safe, too.”

Hoard would like to believe the rumor is true.

Elsaesser, who like Remus was a German immigrant and a self-made man, lived about a half mile away from Remus on St. William Street for the first 10 years of Prohibition (1920-33), according to the U.S. Census reports and Williams city directories posted on ancestry.com.

Being in the hospitality business and a neighbor of Remus, Elsaesser likely knew the bootlegging lawyer from Chicago. He might have been a guest at millionaire Remus’ over-the-top dinner parties during the first half of the 1920s. By 1930, when Elsaesser presumably moved into his hew house on Ridgeview, Remus was out of prison, having lost a 1925 bootlegging case built by an undercover agent who won over Remus’ wife’s heart and convinced her to liquidate Remus’ extensive assets.

George and Imogene Remus divorced in 1927. Remus shot her dead in Eden Park that October, represented himself at trial and got off on an insanity plea. After spending two months in Lima State Hospital, he was ruled sane again and released.

But by then, Remus’ bootlegging days were over. He was cash poor and living in his Hermosa Avenue mansion. Lawsuits Remus filed to get his money back from Imogene failed, and he drifted into obscurity, worked as a real estate salesman and died at his Covington home in 1952 at age 73.

So could Elsaesser have stashed liquor and cash underneath his house for Remus?

Perhaps Elsaesser had a stash, but the aforementioned timing makes a direct connection between it and Remus seem improbable yet not impossible. The last year the city directory listed Remus as being on Hermosa was 1931, so he and Elsaesser were within walking distance of each other for at least a year, perhaps more.

Could Remus have needed a nearby place to hide liquor and money, of which he reportedly had little left?

Even if the chances seem slim, the possibility alone makes good fodder for a professional storyteller like Greg Hoard.

And if you think about it, how cool must it be to live in a house where there might have been illegal hooch — perhaps a little moolah — hidden in secret tunnels more than 85 years ago?