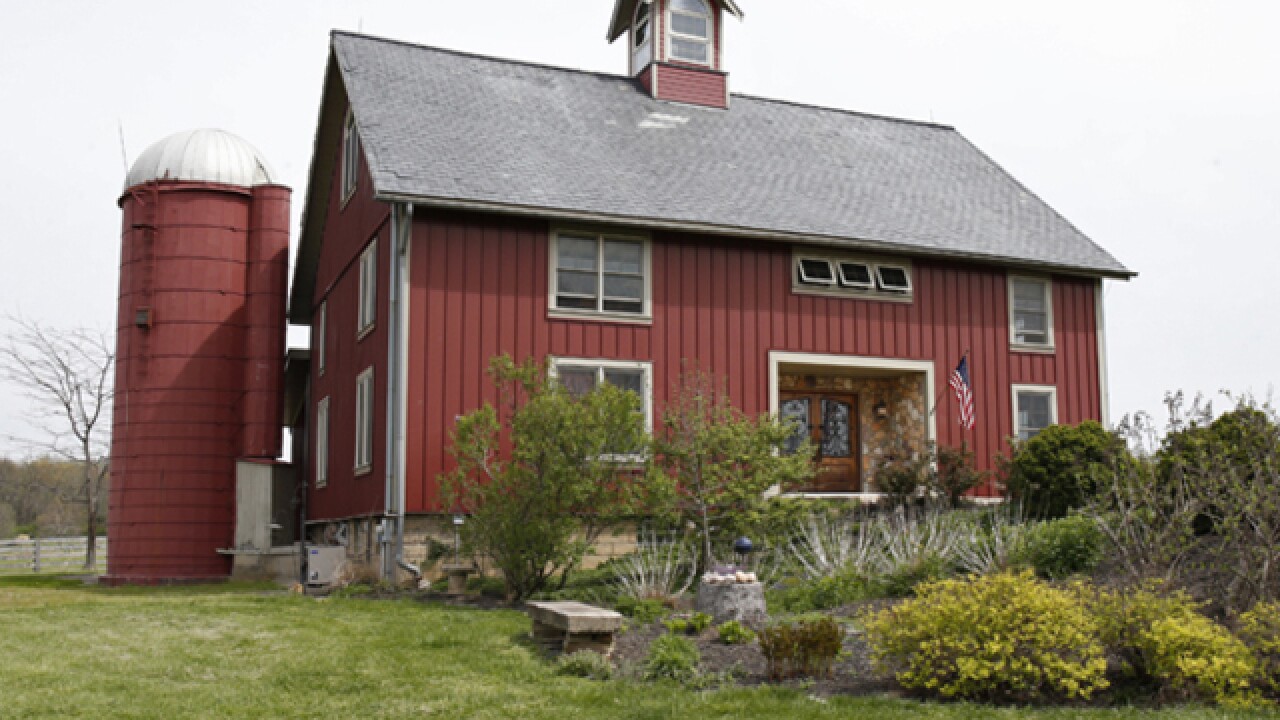 LEBANON, Ohio -- The Heimerdingers’ Warren County barn house is quite the car-stopper. Being featured three years ago on HGTV’s “You Live in What?” has helped convert their converted mid-1800s “back barn” into something way more than the drive-by it had been for more than a century.

“We have people drive up the driveway, take pictures and drive off, and they don’t even ask us if they can,” said Jack, an industrial salesman and experienced carpenter and woodworker who acted as the general contractor on the five-year remodeling project.

The gawkers, said Jack’s wife, Realtor Susan Heimerdinger, obviously appreciate the beauty of the barn house, but they have no idea what went into it or the skepticism the couple faced at the onset.

“When we did this project, all of our families thought we were out of our minds,” said Susan, who like Jack brought two daughters to their second marriage that began 20 years ago this August. Twenty-six people attended the first Christmas celebration the couple hosted in the barn house, including Jack’s interior designer sister.

That day, Jack said with a smile of satisfaction, “I got the approval of my sister. She said we had pulled it off.”

The Heimerdingers’ made-for-TV story began in 1995 when the couple, who were living in city apartments at the time, decided they wanted to move out to the country. Jack hailed from Terrace Park and is a graduate of Mariemont High School and the University of Cincinnati. Susan had grown up on a farm in an east-central Ohio town appropriately named Barnesville.

“Can you believe that? It was destined from the start,” Susan said.

First, they started looking for land on which to build a new home. They agreed they would consider taking on a remodel job as well.

Then, on a Saturday morning, an episode on PBS’ “This Old House” do-it-yourself show about building a barn changed their lives.

“I asked Jack, ‘If we find a barn, would you want to turn it into a home?’” Susan said.

Their Realtor pointed out 5½ acres that had been part of a 125-acre dairy farm, then a cattle ranch and vineyard. The property — which the Heimerdingers used as an alpaca farm for eight years until 2012 — came with an old farmhouse, four outbuildings and a 48-by-36-foot barn that later research showed had been dismantled in Pleasant Ridge around 1900, then moved to its current location and reassembled on a poured-concrete foundation.

The Heimerdingers were all in. They could live in the farmhouse while remodeling the barn, which they started in June 1999.

What the project would entail was, at first, an uncertainty. The rustic barn’s first floor had been remodeled into a wine tasting and party room. The second floor, once a hayloft, had been sealed off. Two cupolas on the roof appeared too deteriorated to save. But the Heimerdingers thought the bones of the barn — its original slate roof, board and batten exterior, wood post beams, exposed wood interior walls and 2-inch-thick, tongue-and-groove pine floor, mouse holes, dings and all — looked strong, a belief that was confirmed by a structural engineer in December 1995.

They hired Bruce and Andy Stewart of Architectural Reclamation Inc. in Franklin to guide them through the changes they desired.

“Our goal,” Jack said, “was to retain the barn look inside and out. … One of my unique challenges was to run the heat and air conditioning without covering up any of the boards.” Insulating the walls had to be done from the outside.

They removed the air-ventilating cupolas and built a similar one in the center of the roofline that included working windows to increase natural light in the house. They tore down an equipment shed that had been built onto the back side of the barn and drew plans to replace it with a wing for a bedroom (currently an office with a Murphy bed), a laundry room, a full bathroom and a mud room that leads outside to a large wrap-around deck and an eight-seat dining table.

The first floor, they decided, should be an open space with four useful areas: kitchen, dining room, game room and living room. The space has been the site of large holiday, Super Bowl and New Year’s Eve parties, as well as Susan’s 50th birthday, which featured a live band and was attended by 60 people.

The Heimerdingers envisioned opening up the second floor and creating a wrap-around hallway that would lead into a master suite, a guest bedroom and a full bathroom. And they would add lots of large windows and a third, totally open level with a sleeping loft and office space.

Jack designed and built a grand staircase, using truck-bed oak for its treads and durable sassafras wood for its railing and spindles. And the couple decided not to paint the few walls they installed, opting instead for a coating of texturized synthetic stucco that would be durable and easy to clean.

But before many of these changes were made, the Heimerdingers followed the Stewarts’ recommendations for shoring up the structure with interior posts from the basement to the ceiling rafters as well as interior wood cross beams, metal cross beams and metal strapping.

When possible, they used salvaged wood, such as the six, extra-long, hand-hewn beams they found in a smaller barn on the property.

The remodel was demanding. And before the Heimerdingers dug into it, they got some sage advice from Bruce Stewart.

“He said that before we move in, we need to know that we’re going to spend a lot of money, a lot of time and that it can have an impact on our marriage,” Susan said. “He really laid it out for us, but we felt we were up for it. Would we do it again? I’d do it again if I was younger. You really need a vision and patience and to be on the same page. You can’t get hung on up things.”

“You both have to be all-in,” Jack added.

And they were, sacrificing weekends and the vacation time they were accustomed to. Susan said that she pitched in troweling the pre-tinted stucco on the walls until she was ready to drop, but that Jack did most of the work. Only occasionally did she tell him “we need to giddy-up a little bit,” Susan said.

The Heimerdingers’ house is at the end of a long driveway, to the right of which is a small outbuilding Susan uses as a potting shed. To the left of the house is the original silo, suggested by friends to be their future poker or party room, but used as storage for now.

Stone steps flanked by shrubs and evergreens lead up to the front door. The original central hallway — now open to the rafters — serves as a breezeway between the game and living rooms on the left and the kitchen and dining area on the right.

The first-floor furnishings are a combination of antique and reproduction pieces, many crafted by local woodworker and neighbor David T. Smith. His work is everywhere in the form of hand-made kitchen cabinets and furniture made to look old and unique to the Heimerdingers’ house.

Smith’s showcase is the kitchen, which features distressed cabinets that hide appliances and “look old, like they’d always been here, but aren’t matchy-match,” Susan said. It has a Smith-made island with a soapstone top and a standard-height cooking area. The other half of the island is elevated so it can house the oven and a warming drawer the Heimerdingers’ desired.

Smith, Jack said, appreciates the 4½-foot-high island half. “He told me ‘It’s a perfect place for me to have a beer.’”

The kitchen breakfast bar countertop is made of tiger maple, which Jack said helps hide just about every scratch. Its second level is cherry with a crackle finish. Both woods are low maintenance, each requiring an occasional mineral oil treatment.

First-floor furnishings include an antique wooden refrigerator Susan bought when she was just 18, an antique drop-down desk, a reproduction Shaker-style sideboard, an old-style billiards table, a custom entertainment center by Smith, and a turquoise inlaid wine table and chaise lounge bought in Santa Fe, New Mexico, that reflect the couple’s love for the Southwest and its art.

Throughout the main floor are tastefully spaced pieces of art —local and historical, sentimental and Southwestern. And there are nods to their love of the outdoors, such as a large chandelier purchased at Cabela’s that’s made of resin but looks real.

The commitment to display and use old things, which they consider to be part of their recycling effort, led them to rescue and reuse, among other things, a 1920s porcelain pedestal sink that had been in Susan’s sister’s house, salvaged timber Jack and his friend, Jack Fugett, fashioned into a mantel for the wood-burning fireplace, a vintage Good Will-brand porcelain stove used for storage and a five-and-dime store display table used as a double vanity in their master bathroom. Painted on the table’s side are the words “Any Item On This Table 10¢ / Stock Up.”

Susan shows obvious pride in her home and in her husband, who made it all happen.

“He can build homes, and he can build furniture. He’s very talented in that way,” she said.

Jack said he credits Susan for being “willing to get her hands dirty” and people like the Stewarts, who brought to the table experience and knowledge that he didn’t have.

“In some respect, I miss those days when I worked weekends. I’m tired, but I’m satisfied,” Jack said. “Eventually, we’ll probably sell it and move into something smaller.”

Susan agreed. “It’s a lot of house to clean, I’ll tell you that.”

What is a back barn?

Back barns like the Heimerdingers’ feature wide openings at the front and back that are connected by an equally wide central hallway. Hay wagons would climb a grassy plank into the barn and empty their loads to the loft via pulleys in the rafters. They would then exit the barn via a second grassy ramp in the back. Cows were milked in the basement.