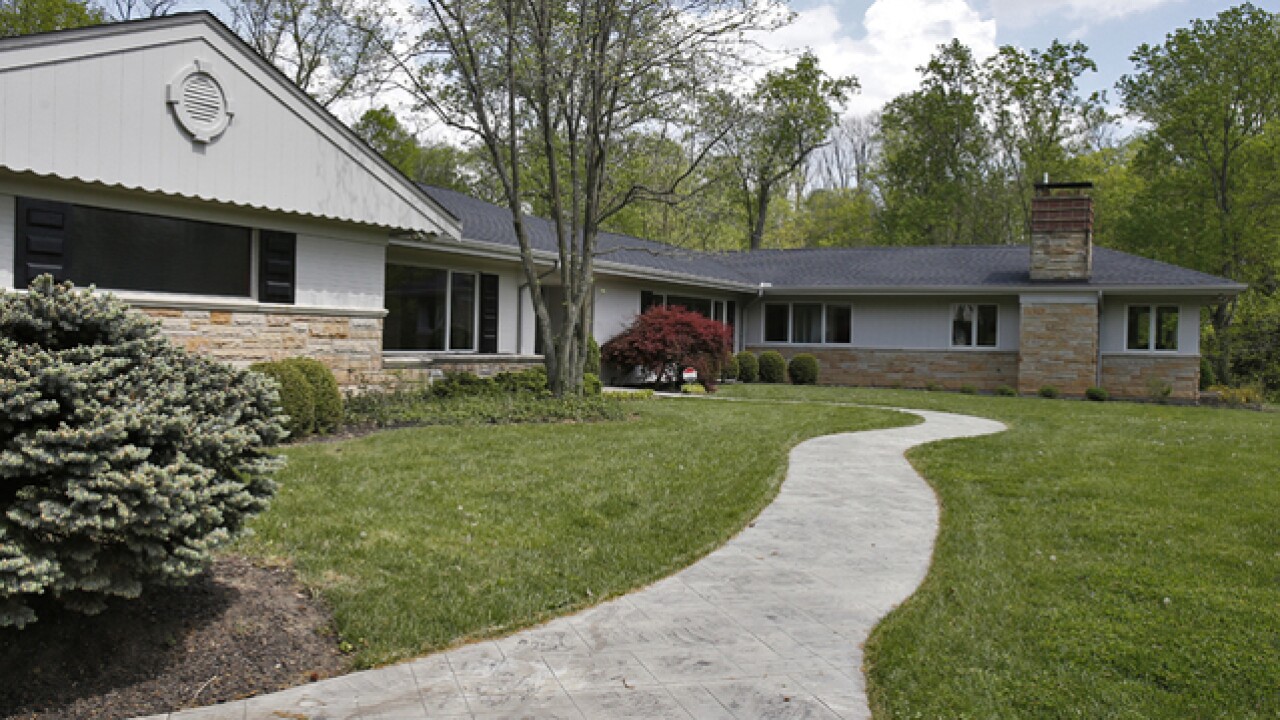 GREEN TOWNSHIP, Ohio -- Everyone is happy the 1957 Willard Grueneberg House in Green Township is going to stay in the second family to own it — even the original owner’s daughter, who hasn’t lived there in more than 35 years.

Kris Grueneberg Hammond was a baby when her mother and father, who was the third-generation president of a foundry in Northside, built a classic mid-century party house on a large wooded lot north of Western Hills Country Club.

Hammond, now living in St. Louis, has wonderful memories of the 4-bedroom, 4,268-square-foot house in which she was the only child: parties centered around a padded Rat Pack-style bar in the family room; impromptu concerts by Cincinnati Symphony Orchestra musicians and guests at the baby grand piano; and tacking yet another horse show ribbon on a cork board made just for her in the basement’s shuffleboard and pingpong room.

Kim Ehrman Springer, whose parents Larry and Joy Ehrman bought the Grueneberg House in 1983, has lived next door since 1996 on family land and was preparing to sell her childhood home when her brother, Tom Ehrman, recently stepped up and said he would buy it from his five siblings. That was nice news for Springer as well as for Hammond.

“It’s good that it’s staying in the family,” Hammond. “There was a lot of ‘cool’ about it. It had a big backyard and we had big dogs. We had to put up a fence, because we had this St. Bernard that tried to jump over it. He was so huge he’d knock people over.”

Keeping the house in the Ehrman family means there’s still a place for the big gatherings that its members are used to.

“We have 30 people in my family now, so this has been a great place to grow up,” Springer said.

Second Ranch For The Gruenebergs

Willard and Jayne Grueneberg were living in a 1948 ranch home he had built on Colonial Drive when they purchased several nearby acres off Neeb Road in Green Township on which to build a similar house. It was to be thoroughly modern, filled with natural light and laid out for entertaining.

When finished, it would sport a duplicate of the weather vane depicting two Willard foundry molders at work, which still tops the Colonial Drive house, as well as a large cast-aluminum monogram with Grueneberg’s initials, WGG, which hangs inside above the side-lighted front door.

Decorative elements inside the house reflect Grueneberg’s line of business. They include two geometric-patterned wall screens made of aluminum that flank the wide entry into the family/bar room, “Titanic” style recessed lighting and six brushed aluminum pipe columns that reach to the ceiling from the end of the Rat Pack bar.

Wood trim, such as the birch paneling and coffered ceiling beams in the family room, is light or painted white throughout the house, which was in style when it was built in 1957. The 2½ main-floor bathrooms still have their original vanities and Formica countertops, colored porcelain sinks and toilets, plumbing fixtures, tile work and aluminum-framed shower and toilet-stall doors with frosted images on the glass.

Springer is especially fond of the first-floor guest bathroom — a pink and gray 1950s classic with built-in soap and toothbrush holders, iconic Formica boomerang-design vanity countertop and leaping marlins frosted onto the gray bathtub stall’s sliding glass door. All Springer did to the room since becoming its steward was remove wallpaper and paint the walls gray.

The house also has its original louvered doors and window blinds, intercom system and Nutone exhaust system in the family/bar room that would have cleared the air back in the day when so many more people smoked.

All of the abundant closets, some with sliding doors, are intact, as is a wall mirror in the master bedroom made of 28 square panes and the marble fireplace surround and hearth.

The suite’s peach and tan bathroom — located around a corner hallway packed with closets — is pretty much as it was in 1957. Even its Grecian shower heads remain.

Guests who use the master bath, Springer said, often comment on the his-and-her showers, the doors of which feature frosted graphic designs. Then they’re surprised to learn that behind one of the doors is a tiled toilet room.

Changes Made by Both Families

About 13 years into living in the house, the Gruenebergs made a dramatic change to the interior that made living there much easier. Originally, they had to exit the kitchen into the two-car attached garage and navigate steps to the basement. In 1970, Hammond said, her parents added a floating spiral staircase in the middle of the first floor that descends to the basement’s spacious in-law suite.

Larry and Joy Ehrman — founders of family-run Harlan Graphics in Riverside— and their children made some cosmetic and structural changes to the house as well. They added a large swimming pool and a 30-by-50-foot concrete patio out back, opened up and modernized the kitchen and carpeted over the family room’s original checkerboard linoleum floor. They also knocked down walls and reconfigured the basement to make an open room for a billiards table and a large place to watch television.

The Ehrmans kept the basement’s in-law suite — a kitchen, lounge area and large bedroom — but remodeled its full bathroom. (A basement door that opens directly to a carport made the suite a perfect place for Springer to live while she attended the University of Cincinnati and when she and her husband were building their house next door.)

A half-bathroom in the basement, like those upstairs, featured a frosted image, this time of a naked woman hovering over water from which a fish is jumping. Springer said she has it stored in the basement’s workshop/laundry/utility room and plans to give it to her son someday.

Springer and her siblings have made some changes in the house since their parents died in 2013. They redid the front walkway, finished removing wallpaper and installing new Pella windows throughout the house and re-carpeted and laid new hardwood floors in several rooms. Springer said she painted almost every wall in neutral colors to give the home a 21st-century vibe.

It’s just a wonderful entertaining house,” Springer said. “The family room, the patio, the pool. We spent so many Sundays grilling out there and sitting by the bar. It’s great just having a place where we can all come together.”

And come together they will, now that the Grueneberg House is staying in the Ehrman family.