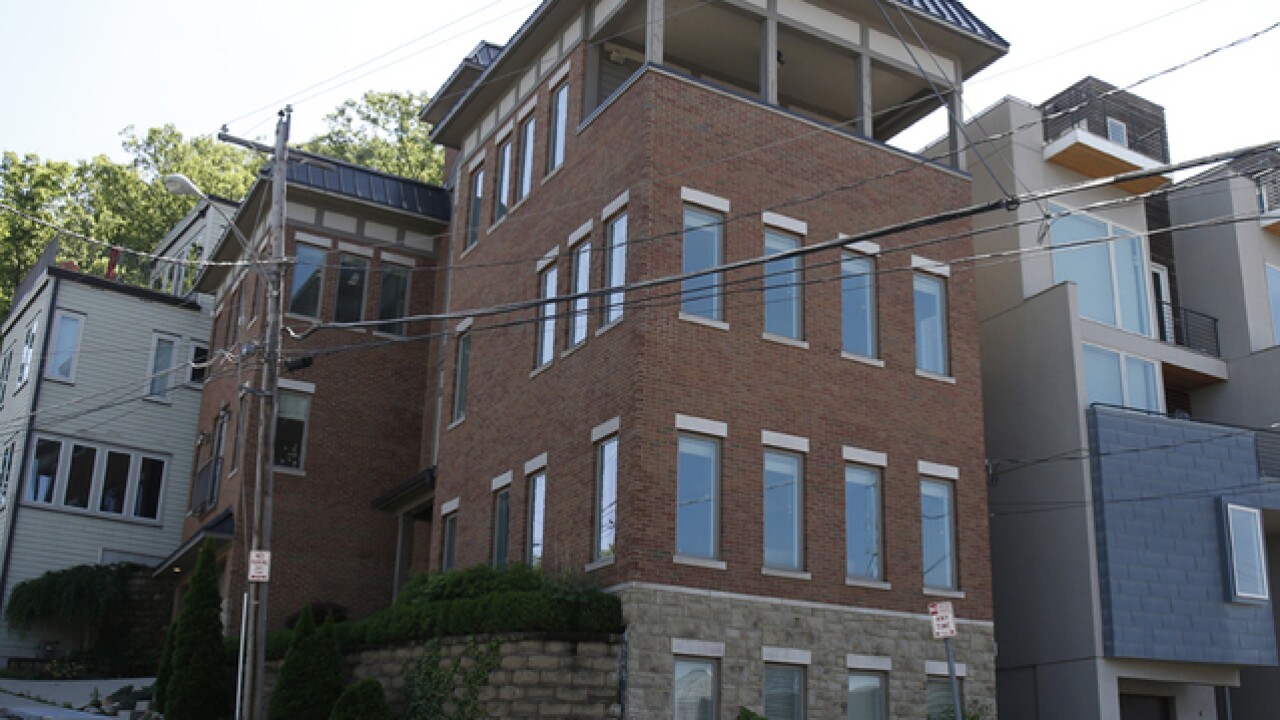 CINCINNATI -- What kind of views can you get for $1.275 million on Mount Adams?

New to the housing market last week is a five-level, four-bedroom, two-car garage property with three full and two half bathrooms that offers sweeping views of both sides of the river, from the Big Mac Bridge to the south, to the Cincinnati skyline and the Price Hill ridge to the west, and to the Baldwin Piano Building on Gilbert Avenue to the north.

“It’s over 180 degrees,” listing agent Perrin March of Coldwell Banker West Shell said of the Monastery Street house. “That view on the rooftop, you can’t get that anywhere else.”

The rooftop, which is accessible via a newly refinished oak staircase and an elevator, features two decks. The view from the 35-by-20-foot finished deck takes in, from left to right, the Purple People Bridge, the Ascent at Roebling's Bridge, Great American Tower, Procter & Gamble headquarters, the Times-Star building, Kroger headquarters, more than a half-dozen church spires, Christ Hospital and the Baldwin Building. Educated eyes will also be able to pick out the tops of St. Peter in Chains, Isaac M. Wise Temple and City Hall against the green backdrop of Price Hill.

The second deck, which is smaller and unfinished (it’s covered with a rubber membrane), provides a glimpse of the 1892 Rookwood Pottery building on the hill behind it as well as the yellow Daniel Carter Beard Bridge (Big Mac) to the south.

Other than those on the south side of the house and in two basement bedrooms, each window provides a city view, a tall one made possible by 10-foot ceilings.

March said the 3,769-square-foot house at 946 Monastery St. was built 12 years ago and came into new hands earlier this year. The new owners, however, decided to move out of state instead of into it, but not after making significant changes and upgrades.

They painted over outdated wall colors with the current color du jour: gray. They replaced light, bathroom and kitchen fixtures and put a new, larger slab of dark gray quartz atop the island in the kitchen and refaced its cabinetry. They pulled up carpeting and refinished all the oak floors, as well.

A small construction project converted a basement workout room into a bedroom, and two rooms on the second floor were converted into a sunny, single, 20-by-12-foot bedroom with three closets. The owners’ plan, March said, was that one child would get the basement, the other the large bedroom.

Among other options, March said, that large bedroom with eight windows on three walls and more-than-ample storage space, would make an inspiring study or office where one or more people could work.

Another room in the house that offers multiple-use possibilities is the only room (other than a half-bath) on the first level. March said the 20-by-16-foot space, which has seven west- and north-facing windows, likely served as a party room in the past. The owners had its wraparound bar removed but left two rows of granite-topped cabinetry, which house a sink, wine bar and ice maker.

“I see this as a welcoming, open room that kind of sets the tone for the rest of the house,” March said. Although visitors will be drawn to the rooftop, he said he can visualize the room as a place to meet over a drink before heading up to Mount Adams or down to the city for dinner or a show.

The master suite is on the second floor, where the views open up. Its 20-by-14-foot bedroom has a sliding-glass door that opens to a false balcony and a view of Mount Auburn. The owners added two modern chandeliers to what had been a cave-like walk-in closet but kept its multiple racks, shelves and cabinets, which include a velvet-lined drawer for jewelry.

The master bath features a glass-enclosed shower, a jetted tub in the corner and polished limestone on the floor, tub surround and tops of a his-and-hers vanity. Its lone window faces into the building next door, but privacy blinds let in a generous amount of natural light.

Between the master suite and second bedroom with the great view are an open sitting room with a large north-facing window, a laundry room and a full bathroom.

The views get even better on the third floor, which features the living room, a sitting room, a half bath, the kitchen and dining room.

The 18-by-17-foot living room features a gas fireplace flanked by shelving with space for a large flat-screen television. At the west end, which is almost all glass, a sliding door leads to an 18-by-6-foot deck that faces Downtown.

The dining room, which is located through a 9-foot opening off the kitchen, is where March said the next owners of the home might find themselves wowing dinner guests on a year-round basis. Four of its windows face north, the other three face west.

“The views you get out here while eating or entertaining are really beautiful,” March said, as are the lights of the city and surrounding hills after the sun has set.

The ultimate view from 946 Monastery, however, definitely is the west-facing rooftop deck. It is just high and far away enough from Interstate 71, March said, to muffle the traffic noise heard by neighbors across the street.

It’s a place where a party of 50 can watch the sun go down, identify skyline buildings and play “count the steeples” before heading home with the memory of experiencing a $1.275 million Cincinnati view.