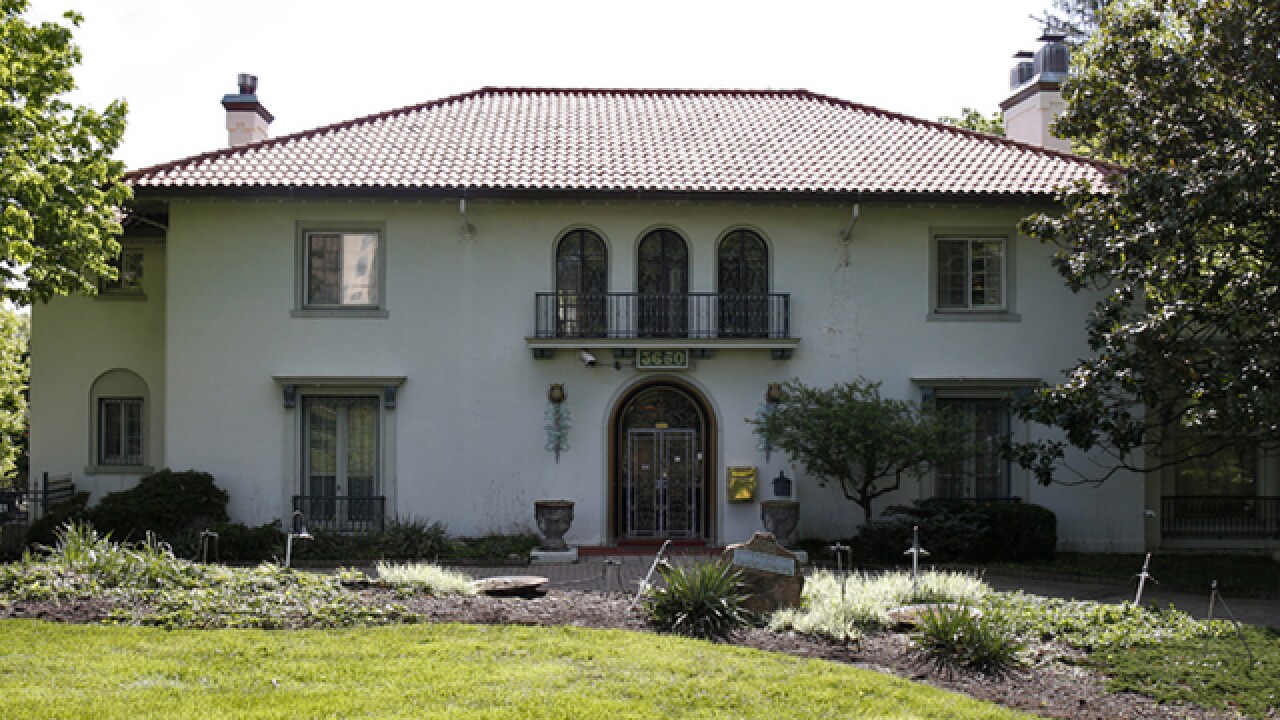 Copyright 2018 Scripps Media, Inc. All rights reserved. This material may not be published, broadcast, rewritten, or redistributed.
Gary Landers
The front elevation of the Strader family home in Clifton, Thursday, May 5, 2016. (Photo by Gary Landers/WCPO)

CINCINNATI – Returning to the Clifton home in which his father, then-University of Cincinnati President Walter C. Langsam, and his mother, Julia Stubblefield Langsam, lived in from 1955 to 1971 was nostalgic but less emotional for Walter E. Langsam than his first return there had been 10 years ago.

The house was crawling with dozens of shoppers who had come to 3650 Clifton Ave. to preview more than 1,400 items for sale in a May 8 online auction. Langsam, who has been Cincinnati’s most prominent architectural historian for decades, nevertheless managed to admire the home, which eventually will be sold through the trust of the home’s third owners, the late radio announcer Jack Strader and his wife, Joan, who has moved out.

Langsam said he was surprised to see the original architectural drawing of house’s facade – framed and with a auction lot tag hanging from it – in the hallway of the Strader house’s basement.

“I’d never seen that drawing before,” said Langsam, who likely has viewed as many historic Cincinnati documents as anyone alive.

But he was included in some memorable moments at the house, such as the time the inventor of the oral polio vaccine, Cincinnati infectious disease researcher Dr. Albert B. Sabin, rang their front door bell.

Cincinnati architect John S. Atkins designed and George S. Werner built the house for Henry B. Closson, who was part of the family that owned a venerable interior décor store in downtown Cincinnati for 136 years.

Atkins based the 6-bedroom, 4-bathroom, 5,134-square-foot house on Florentine Villa architecture, setting it on acreage that once was a cattle ranch owned by the great-grandfather of Jack Strader, Cincinnati steamboat, railroad, banking and real estate tycoon Jacob Strader.

The Clossons filled the home with furniture, artwork and other decorative items from their family store and passed most of it on to the University of Cincinnati in 1955, when Walter C. Langsam chose it to be his presidential estate.

Walter E. Langsam was 20 years old at the time. He and his brother had rooms upstairs and shared a bathroom. His father worked out of a bedroom suite in the northwest corner of the first floor.

“I recall a lot of major decisions being negotiated and made there,” Langsam said of his father’s office.

Differences in the property today compared with when the Clossons and Langsams occupied it are both structural and cosmetic. The Straders, Langsam said, added a back porch overlooking the ravine where Jack relaxed during the years before his 1998 death. Gone is the intricate garden Julia Langsam planted from the back of the house all the way down a ravine to a stream that ran to Burnet Woods a half-mile to the south.

Langsam said that the Straders covered the medieval-style wooden beams that once spanned the living room ceiling with floral tiles reportedly imported from Italy, a change he said pulled the room’s Florentine elements together.

Visitors approach the Strader house on a circular driveway. The house is set below street level, so their first sighting is of three arched, iron-gated windows and an iron-railed balcony on the second floor. Stop at the front door to get a second feel for Florentine Villa architecture: an inset, arched entry with matching bracketed, copper sconces on each side that feature intricate scroll work and tulip-shaped glass shades. A simple brass plaque above the door reads “Strader.”

The most dramatic room in the house is just a step inside. The great stone hallway skies to about 18 feet. The three arched windows light it up naturally, and a classic, European-style crystal chandelier drops down to illuminate the center of the hall. Stairs to the left lead up to second-floor bedrooms, a gated door opens straight ahead to the formal dining room and to the right is an arched opening to the living room and reading room beyond it on the south side of the house.

What Walter C. Langsam used as his private office and a bathroom are off a short hall to the left of the grand hall. The kitchen, butler’s pantry and enclosed porch are in the northeast corner of the house off a hallway with a door that leads to the basement where Jack Strader held court and displayed memorabilia from his career and family keepsakes that paid homage to his great grandfather’s mid-19th century business interests.

Walter E. Langsam said the house was designed by Atkins for the Clossons to entertain large groups, a setup that worked for his family as well in their attempt to unite the university and the community through social affairs

“Every other Sunday during the school year, 200 graduating seniors in different departments that were very diverse, as I recall, were invited for a buffet,” Langsam said. His mother would host, as would members of the UC faculty. “Usually, about 150 students would come.”

Sean Darragh, one of two Strader grandsons, spent the first three years of his life living in the house while his grandparents lived next door. The Closson and UC house was a wedding gift to his parents from Jack and Joan Strader.

Darragh, who lives in Texas and is a security specialist, said he has wonderful memories of the two houses and the yard.

“We used to love to play in the valley there behind the houses in the woods,” Darragh said. “Because parts of the hill in that valley used to be a trash dump for the farm in the 1800s, we constantly dug up old beer bottles from Cincinnati breweries.” Part of his and his brother’s collection is displayed at the Cincinnati Museum Center in Union Terminal.

Darragh said he remembers being so adventurous in those wide open spaces when he was a toddler that his grandmother would instruct the family’s pet Dobermans to keep a watch on him.

“Those Dobies were like assistant babysitters,” he said. When Darragh strayed too far from those houses, “they’d latch on to my diaper and hold on to me.”

“And of course, we loved to play in the house. There were like a million places to hide. It was so huge” he said.