Home Tour: California, Ky., house perched above Ohio River is like ‘sitting up in a cloud' 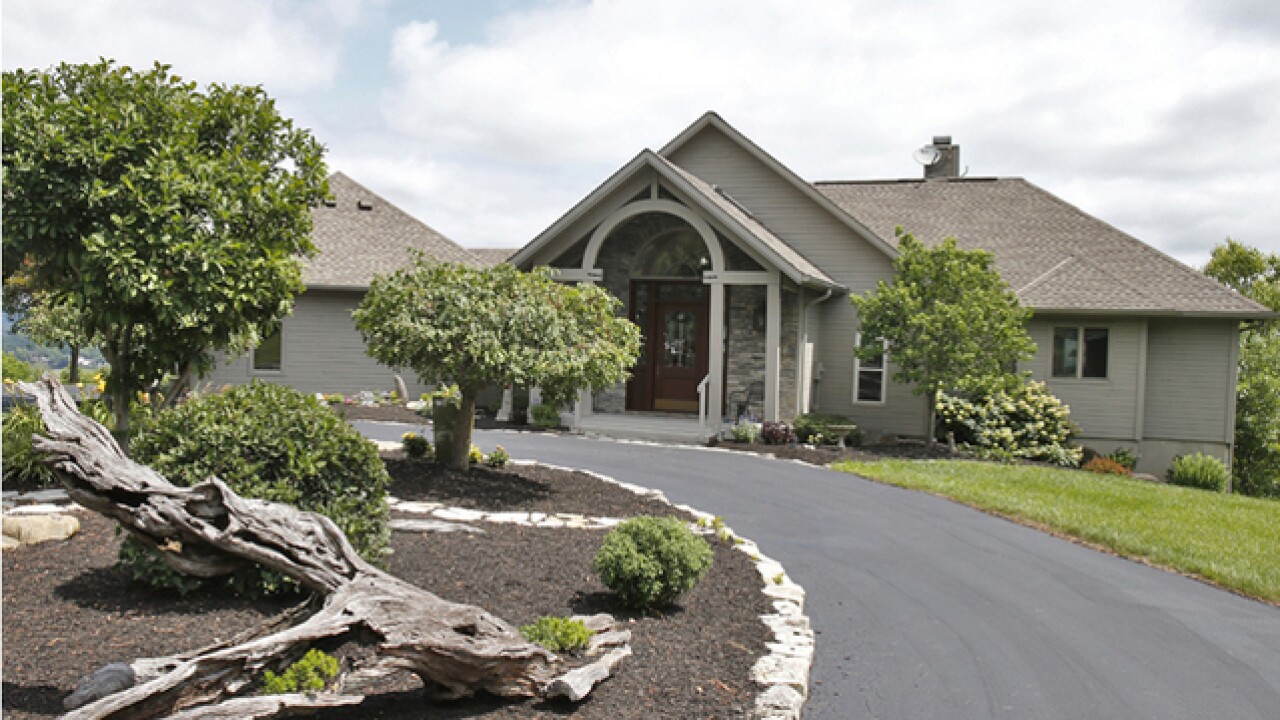 CALIFORNIA, Ky. -- When low valley fog engulfs the Ohio River, the stacks of the old Beckjord power station poke out above the blanket, making Joyce Reed feel as if she is “sitting up in a cloud.” And when a doe appears outside her hillside home’s lower level — the same doe she fed when it had babies — “she still comes right up there to that window and waits for me to throw her apples.”

Joyce and her husband, retired Cincinnati attorney Bob Reed, are going to miss the perched place they built in California, Ky., 23 years ago when a buyer takes their keys and they move to a more practical place. You can see in their faces that they miss it already.

After all, it’s where they got married, where they have welcomed family and friends into their all-cedar great and “ship watch” rooms, and where they’ve watched their grandchildren swim in their pool, the sun rise over the river and the full moon shine down into their open kitchen. And while they wait for someone to meet their $674,999 asking price, it is where they will spend the bulk of their days in the private serenity they created.

“The house is built for comfort, built for relaxation, built for peace,” Joyce said. “We didn’t want a house where you had to keep your suit on.”

Bob said that in 1992, when he and Joyce were engaged, he found an abandoned pump house across the Ohio from New Richmond that he thought could be converted into a cool home. Thomas More College bought it, however, but Bob drove around the area and discovered a 21-acre parcel at the end of gravel-covered Sunrise Road that he thought might have potential for new construction. It did, and he bought the land.

He hired an architect in Petoskey, Mich. and, working with computer models, they helped him and Joyce design a 4-bedroom, 3½-bathroom house with lots of big windows and an octagonal lookout room like the ship-watch rooms he had seen on the shores of the Great Lakes.

“It’s our favorite room,” Bob said, kicking back in his recliner and pointing out how the eight sections of the vaulted ceiling are mirrored in the room’s floorboards. “It’s where we spend our time,” Joyce added.

The rest of the first floor consists of a master bedroom suite on one side of a two-sided, wood-burning fireplace and a great room/kitchen on the other side. A deck off the back feels as if it’s hanging over the river, though there is a large lawn and thick forest between it, and Mary Ingalls Highway (Ky. 8).

Standing at the glassed-in deck rail, Joyce points out the scenery: the swimming pool and raised gardens and deck with Beckjord in the background to the left; New Richmond and a smiley face cut into an open hillside field straight ahead, and the forest on the Ohio side over which the sun rises and into which the river disappears.

She talks of watching a bald eagle perched in a nearby tree, and of the wildlife she has seen: deer, bobcats, coyotes and more. But it’s the memory of watching a solar-powered airplane fly low up the river three summers ago that makes her most nostalgic.

“It was low, just amazing. It had a big wingspan. It was huge,” she said. The experience rivaled the wonder of seeing historical vessels pass by such as the Delta Queen, the Mississippi Queen and replicas of two of Christopher Columbus’ ships, the Nina and the Pinta.

The nautical theme of our visit continued back inside the great room. The walls and cathedral-ceiling panels and beams are whitewashed cedar that Bob said they selected because it repels termites and looks like ship wood. Arches — in the split-fan window where the moon comes in, over the foyer entrance and ship-watch room — are like halves of portal windows, and many of the paintings are maritime-themed prints by Englishman John Stobart. A large piece of stained glass hanging behind Bob’s recliner — a Christmas present from Joyce — features the Robert E. Lee paddle-wheeler.

Bob points with pride to the one chandelier in the great room. The once-black light fixture came out of a high school in Grosse Pointe, Mich., and was a gift from Bob’s brother-in-law.

“When I started to clean it, I found out it was brass. Every piece on it. I couldn’t believe it when it turned out to the brass,” Bob said.

Diagonally across the great room from the chandelier is a brass-and-glass stairwell with steps that lead to a lower level the Reeds don’t use much anymore. It features a large family room, three bedrooms, two bathrooms and a sliding door that leads to a deck and pathway to the Gunite swimming pool, two-car garage and around to a staircase up to the ship watch.

Surrounding the pool on two sides are stone walls that Bob designed to retain a hill and border his flower gardens. A railed wood deck separates the pool from the drop-off to the river.

- The forward-thinking Reeds had a geothermal heating and cooling system installed in the ground after the extensive excavation of the property was completed.

- More than half of the windows in the house offer views of the Ohio River. All four at the front door feature stained glass done in a leafy vine motif.

- The kitchen has an eight-sided, sit-down bar as well as a six-sided island and cabinet appliances.

- The master suite’s details include an antique mantel purchased at Wooden Nickel in Cincinnati, his-and-hers closets and a jetted tub flanked by matching vanities with sinks. All bedrooms are carpeted and have ceiling fans.

- There is a circular, paved driveway at the front of the house and ample parking next to the attached garage. The garden beds feature little fairytale villages crafted by Joyce.