Home Tour: Architect got to build his own design, and the result was a farmhouse like no other

'I want what I do to be special and count' 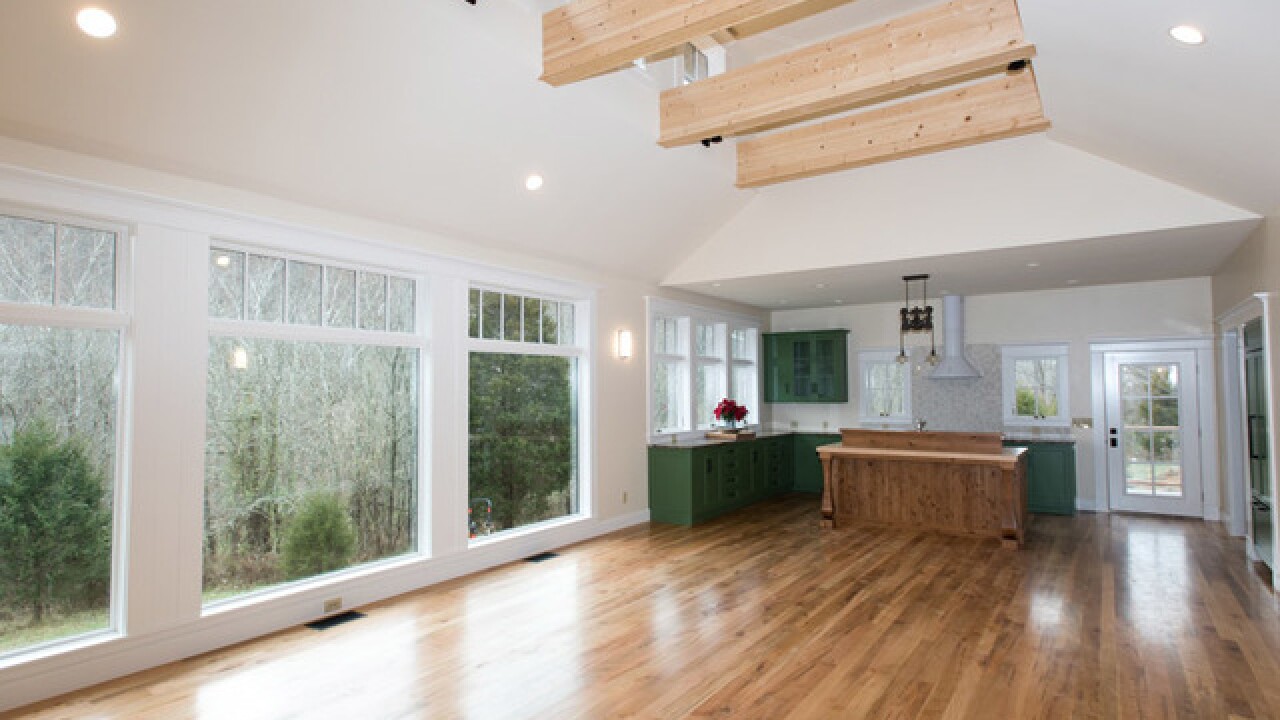 GEORGETOWN, Ohio -- Not once in his 30-year career as an architect had Rod Sidley "built" a home. Sure, he had designed scores of additions and remodels as head of the small Wyoming-based firm that bears his name, but the opportunity Diane Santoro provided him -- to oversee construction of one of his designs as the general contractor -- was a first.

The result was a modern farmhouse like no other that's located at the end of a narrow, often mud-splashed road along Straight Creek in Brown County. What Sidley has achieved is a sunny, spacious and materials-rich house that meets Santoro's every requirement: It's energy-efficient, maintenance-free, out of the flood zone and laid out on a single floor so that her mobility-limited husband, Edward Santoro, can access and enjoy every one of its six rooms and garage.

We toured the farmhouse days before the Santoros moved in, when just a few small jobs were left unfinished. With a look of complete satisfaction on her face, Diane Santoro stood in the foyer, faced the great room's three 6-by-7½-foot picture windows and gushed over her new home.

"I couldn't live anywhere else now. I was a city girl when I had to be, but I'm not really a city girl any longer," said Santoro, who hired a longtime local farmer to grow corn and soybeans on the 160-acre property. Santoro runs the business and the several barns they own, and she takes care of a pack of rambunctious farm dogs as well.

Sidley, too, seemed satisfied and proud that his architectural, business and construction experience carried him through to a successful end, although he expressed his emotions with humility.

"I was just lucky to know and find the right people to pull this all together, which I probably couldn't have done 20 years ago."

Diane and Edward Santoro lived and worked outside New York City. As they approached retirement age, they were "pretty much killing it there," Diane said. "We had great jobs and a great thing going," but she said they were tired of all the stressful commuting they had to do.

The couple's search for solace covered East Coast locations such as Smith Island, Maryland, and Virginia, and they looked at property in Kentucky as well. In 2002, they found the Brown County site of their dreams, which had been a cattle farm. On a 2004 visit to southwest Ohio, they happened to see an article by a Cincinnati writer that featured Wyoming-based architect Rod Sidley.

Santoro liked Sidley's philosophy of making the architecture simple yet smart and that he vowed to work closely with clients on every detail.

"I said, 'Now this is my boy,'" Santoro recalled. But it would be 10 years before she picked up the phone and called Sidley.

Once plans were finalized and the site, which is perched above and 125 yards away from Straight Creek, had been excavated, construction began in March. Sidley oversaw sub-contractors' installation of underground electrical, plumbing and septic systems. A concrete slab about one-third the depth of the house solidified its grip on the hillside. He set and worked within a budget that allowed him to achieve quality by balancing high-end with big-box purchases.

The frame of the house is unconventional. Sidley and Nisbet Brower Lumber in Sharonville designed and built the house's bones out of wood panels and a tongue-and-groove beamed truss system similar to that used in manufactured housing. It took only about three weeks to frame and roof the house.

Then it was time for Sidley to put down his hard hat and slip into one more suitable for the interior work that makes the house so special. He defined his design philosophy in short remarks as he led a tour of his creation.

"I try not to be too flashy. Architecture is meant to be the background to life, not center stage."

"There are no insignificant details."

"I want what I do to be special and count."

Guests step off a gravel carport into what Sidley calls a "ceremonial" entry. It features a pre-glazed mahogany and rippled-glass door -- "Can you believe it? I got it at Home Depot." -- that is flanked by custom, E-glass sidelights. The entry's flooring, which is red limestone tile that Sidley sourced from Mexico, carries over to the adjacent bathroom, which features a custom pedestal sink made of the same limestone and is supported by a reticulated steel frame Sidley designed. Wooden handrails Sidley crafted for "limited-mobility living" soften and add texture to the space.

It's what lies ahead of the entry in the great room -- a picture-window view out to the tree-lined creek -- that Sidley said will make people stop.

"The view is the main thing here," Sidley said, and so is the light, which is heightened by six "lantern" windows near the top of the room's 15-foot-high vaulted and beamed ceiling alcove.

"If I had a signature piece, that would probably be it," Sidley said of the lanterns. "I like to bring light in from above. With all the (six pre-made) trusses, it went together very quickly."

The huge space achieves single-room living in that cooking and eating can be done at one end and lounging and television-watching occur at the other end. Its creamy walls and white trim are classic, but the unusual ambrosia maple floors add surprising character.

"I love the colors of (the floors). I didn't want the wood to be so homogeneous that it wasn't 'there,'" Sidley said.

Santoro challenged Sidley to design an unconventional kitchen with minimal upper cabinets. She asked that its island be topped by a piece of maple butcher block from an old 2¼-inch-thick baker's table they owned as well as an unusually wide and deep porcelain farmhouse sink.

The sink's depth meant Sidley had to install a dishwasher drawer instead of a standard appliance in the island. There was no alternative, he said. "The sink was so grand, I was thinking, why wouldn't we want to use it?"

Sidley chose hard and knotty alder for a short backsplash behind the sink and the island's cabinets and decorative front legs, which he said were inspired by an antique Rookwood Pottery candlestick he admired.

They chose Sand Cove countertops, a five-burner stainless-steel stove by Bosch and a white porcelain exhaust hood. Santoro agreed to paint the main cabinets green to round out the design. Sidley couldn't find matching handles for the green cabinet doors that conceal the counter-depth Sub Zero refrigerator, so he created them in his personal wood shop at home. The whole effect is somewhat "barny," he said.

Lighting in the room comes from the LED pot lights and a reproduction industrial pulley fixture with two pendant lights over the island that Sidley bought from Restoration Hardware.

The pantry is located through a wide opening -- all interior doors in the house are 36 inches wide instead of the standard 32 inches. It features a salvaged stainless-steel sink, a stacked washer and dryer set, and cabinets made by wood-finish specialist Seth Mason of Mason Carpentry on Demand in Fairfax.

The concrete floor that started in the pantry extends into the mudroom and, ultimately, the extra wide and deep single-car garage. Its Dutch door leads to the side yard and porch, and there's a window on the opposite side with a view of the front door.

The bedroom's six large casement windows swing open -- unlike those in the great room -- and let in the breeze that comes up from the creek, and enough light to keep the pot lights off most days. Center stage in the room is a tongue-and-groove lined alcove for an antique wood-burning stove the Santoros owned. The suite also includes a double-sink bathroom with a large, walk-in glass-and-tile shower. A door leads from there into a closet the size of a small bedroom that Sidley plans to carpet.

Flooring: Ambrosia maple throughout the great room, kitchen and master bedroom provides punch and texture, as does the red limestone in the entry hall and powder room. Sidley went with low-maintenance concrete in the pantry and mudroom and Durango limestone in the bathroom.

Paint: Every room except the Majolica Green bedroom is painted Navajo White, and all the door and window trim is bright white. Sidley drew inspiration from the Santoros' old ceramic table lamp in selecting green for the kitchen and island cabinetry that was crafted by Ernst Custom Cabinets of Bond Hill. He chose black for the porch's exterior windows and door to contrast with the house's light brown siding.

Counter tops: Polished Sand Cove from Mont Granite in West Chester Township tops the main kitchen counters, picking up green from the main cabinets and browns from the island's maple top and knotty alder base and backsplash. There was enough leftover maple to top a run of cabinets in the pantry as well.

Cabinets: Most unusual are those in the pantry that Mason made of pine left behind by a crew of Amish carpenters who worked on one of the barns. Sidley hand-picked heavily veined pieces of ambrosia maple he fashioned into a cabinet under the master-bedroom sink.

Old decor: The Santoros are experienced collectors of antique and vintage pieces, a few of which are part of Sidley's interior design. They include the aforementioned maple baker's tabletop and farmhouse sink, cast-iron Double Star-brand stove in the bedroom, and industrial stainless-steel sink as well as a hearth made of old Brown County bricks and a metal and crystal chandelier for the entry hall that came out of Edward's mother's house.

Exterior: Pre-finished Hardieplank cement-fiber siding envelopes the house, which is trimmed with Azek PVC and pre-painted soffits from Nisbet Brower. "It's virtually maintenance-free," Sidley said of the exterior. "You only have to paint the black doors once in a while." On occasion, the Santoros might have to clean the tempered-glass balusters that span the cedar pole porch railing made by Sidley and Mason.

Diane Santoro sees a lot of furniture shopping in her future. She said she doesn't have many pieces that complement the feel of their modern farmhouse.

Rod Sidley won't be adding much to the 6,000 miles he estimates he drove to and from Brown County in 2016, but he said he'll be available to clear out a few trees so the Santoros will have a better view of Straight Creek when the leaves come back in the spring.