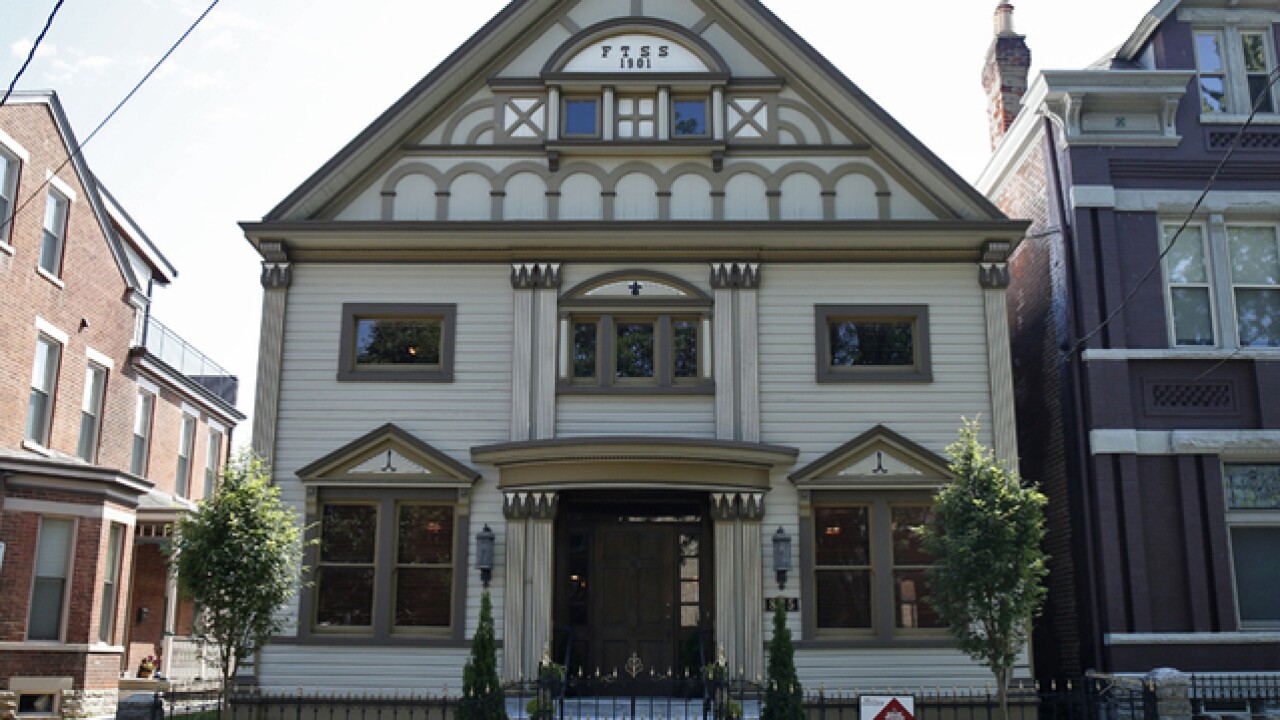 Gary Landers
<p>The front elevation of the Newport home of Chad and Nicole Reynolds, which was converted from a 115-year-old church.</p>

It was 2004, and 27-year-old Chad Reynolds was not seeking absolution. He was searching for a home to buy, one that had an industrial or urban vibe, such as a warehouse, a manufacturing plant, an office building or even an abandoned firehouse.

When his search failed, he considered building from scratch on one of six lots he owns on the side of Price Hill, but his West Side family talked him out of doing that.

In fitting fashion for a website entrepreneur like Reynolds, he found his future home on the internet: a church on Overton Street in Newport built by the First Temple Society of Spiritualists in 1901.

“I found this place online at 9 p.m. on a Friday night, and it seemed like the right place for me. I had the feeling that this was the one,” Reynolds said.

It wasn’t anything like what the self-described non-religious man expected to fall in love with, but he was taken with its spacious sanctuary (36 feet by 75 feet) and the remodeling possibilities offered by its choir loft and four-doored rooms off the entry hall. He grabbed his cellphone and called the listing agent who left in the middle of eating dinner to meet Reynolds at the church.

“When you find something you like, you just kind of have to get on it,” Reynolds said. He wasn’t so impulsive as to see and buy it in one night. He brought his mother along to be his “voice of reason.”

There would be no talking Reynolds out of anything this time. Despite the green carpeting and overall “white box” appearance of the church, Reynolds said he “saw its potential and imagined what it could be.” He closed on the $137,000 deal in the presence of the sellers, two pastors with New Life Ministries.

“It was like a dream you have, being there with the priests to sign your life away. But they were excited to know someone was going to build a home in it,” Reynolds said. One of the pastors told him, “Son, you live in a blessed home.”

“That really sealed the deal for me in that it meant this could be a special place, not that it could be perceived as weird to live in a church,” he said.

A lot has transpired since 2004. Reynolds, his parents, Bud and Rita Reynolds, and several other family members worked hundreds and hundreds of hours on chores such as stripping, sanding and lacquering. It took nearly two years to convert the church into a home.

The risks he took, Reynolds said, paid huge rewards. And the hurdles the first-time remodeler encountered are now just fun stories to tell.

“I didn’t realize when I moved in that there wasn’t a shower,” Reynolds said, smiling. “That was the first of the many ‘gotchas.’”

More of a “problem solver” than a carpenter, Reynolds had his uncle build a temporary shower, what he calls “Karate Kid” shower, one with a metal ring with a curtain.

Twelve years of collecting religious artifacts and old books and buying new lighting and furnishings have gone by, and the result is a home with an eclectic, unique décor that is perhaps unrivaled in old Newport. Reynolds’ days of living and entertaining there, however, are about over.

Just when he pretty much had the place finished, Reynolds fell in love and got married. Now, he and his wife, Nicole, have a 2-month-old daughter, and he said it is time to live up to his promise to move into a place that is “theirs” and not so much “his.” The now 115-year-old, 4,870-square-foot home with architect’s plans to add a two-tier deck and three-car garage are for sale at an asking price of $574,900.

The yard-less property is nestled inconspicuously among other old homes in the tree-lined East Row Historic District. Reynolds’ choice of period paint palette of muted earth tones helps it blend in.

Visitors pass through the original iron gate — which was manufactured by the 1858-founded Buecker Iron Works of Newport and repainted black with gilded accents by Reynolds — and climb several steps that split the symmetrical, Colonial Revival building.

Inside the entry hall are four rooms where Reynolds initially lived while the choir loft and second-floor storage space were redesigned by architect Sean Keith into a master bedroom suite. Today, that entry space houses two bedrooms, a baby room and a full bathroom that guests can use in privacy provided by an original door that closes the wing off from the great room in the old sanctuary.

Great room is no understatement. It really is four rooms in one: kitchen, living room, dining room and billiards room.

“Overall, I’d say the biggest decision I had to make, and I think it paid off, was making this one big room instead of designing all different rooms,” Reynolds said. To modernize the space using drywall dividers, he said, “just didn’t feel right, so we brought back all the wood and so on.”

Reynolds and his crew stripped and refinished all the room’s wood trim and three layers of carpeting and linoleum to get down to the original Mississippi white pine floors. They exposed the 44-foot ceiling beams above the master suite but left the 22-foot great room ceiling as it was in order to preserve a house-like ambience.

The building needed all new wiring, insulation and two air-conditioning units, some of the ductwork, which is in soffits that span the great room ceiling. They are hidden behind false beams Reynolds designed and faux-painted in leather-like fashion to match walls at the front and back of the great room.

The eyes of those who like architecture and history might be drawn first to the six boldly colored stained-glass windows that flank the room, but others who like to eat and drink might head straight for the kitchen, which is located in the old, extended altar space.

Reynolds said he paid homage to the building’s previous life by installing a 15-foot-long wet bar that faces out into the great room where there used to be rows of pews. And he integrated religious statuary and decorative items throughout.

He said it’s his favorite place to hang out.

“I tried to create a bar/altar to give some kind of inspiration back to the church,” he said. “When we have family events here, everybody is packed in the kitchen. It has become the focal point of everything.”

Converting the old building revealed secrets and inspiration. Reynolds found old photographs, instruments and an old banner in the attic from the days when the building was used by St. Stevens Church as a meeting house its members named Forester Hall. The curtains that drape the windows play off the colors and style of the banner.

Features like the curtains, even the religious statuary Reynolds traveled throughout the region to find and bring into the house, could stay if the next owners desire them, he said. He expects they’ll want to keep the great room’s four matching chandeliers he traveled to Seattle to buy from Rejuvenation Hardware, and he hopes they “get” that he recycled a lot of materials in making special decorative touches.

“The coolest thing about this space is that it’s kind of peaceful. You feel like you’re in your own little world,” Reynolds said.