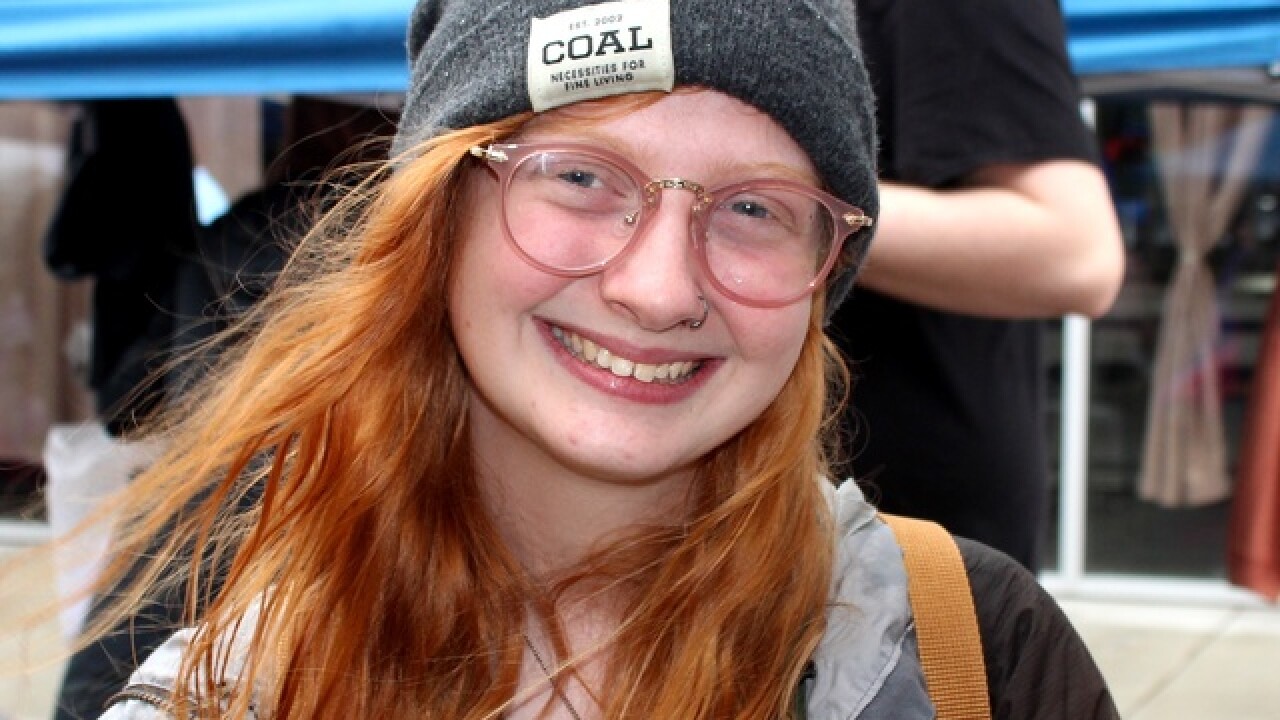 COLUMBUS, Ind. -- Led by an 18-year-old high school senior, the first-ever Columbus Pride Festival used rainbow flags, slam poetry and Kesha remixes played at ribcage-rattling volume to paint its message across Vice President Mike Pence's hometown: This is our home, too. It always has been.

"Growing up queer is -- it's been a little rough," attendee Job Willman said. "But I think with events like this and continued support and trying to educate people, people like me can grow up better."

Pence's political career, much of it built on the rock of his strongly held "evangelical Catholic" faith, has included opposition to the legalization of gay marriage as well as measures that would allow lesbian, gay, bisexual, transgender and queer people to participate openly in other institutions of American life. In 2000, his congressional campaign website stated "homosexuality is incompatible with military service" and that "Congress should oppose any effort to recognize homosexuals as a 'discreet and insular minority' entitled to the protection of anti-discrimination laws."

More recently, he repeatedly refused to answer ABC News reporter George Stephanopoulos' questions about whether a "religious freedom" law he signed as governor would allow legal discrimination against LGBTQ people in Indiana.

Although the volatile President Trump frequently eclipses Pence in the eyes of the nation, the invisible presence of Columbus' most famous son has enveloped the small city's public image, longtime resident Samantha Aulick said.

Signs supporting his brother's congressional campaign pepper neighborhoods of low-slung houses on the drive up to downtown; when Aulick and her wife travel, the name of their hometown drops like a wine glass on cement.

"'Oh, Columbus, Indiana?'" she recalled one acquaintance asking, the 'ugh' implicit in their tone. "'Isn't that where Mike Pence is from?'"

Yes. It's also where Aulick, now 46, met and fell in love with Alexa Lemley as a girl and where they both returned after college despite the "culture shock" of reentering conservative-leaning Bartholomew County, Indiana.

"Of course there's going to be homophobia wherever you go," Aulick said. "But sometimes it overshadows all the good. We've seen so much wonderful acceptance and progress."

They still had never seen a pride event in their hometown until Saturday.

Erin Bailey, the 18-year-old organizer of Columbus Pride, never expected to be fielding interview requests from the Human Rights Campaign and CNN. The slight redhead, who strolled the festival in rose-pink horn rims and a rainbow-emblazoned ringer tee, began organizing Columbus Pride to meet a graduation requirement at Columbus Signature Academy.

According to CSA's website, all students must complete a project meant to "explore endeavors that fuel their passions and to act as a bridge between a student's high school experience and his or her future goals" before they can collect their diplomas.

Bailey, who identifies as bisexual and hopes to work as an art therapist, saw an opportunity to help others like herself find comfort and community where they lived. A GoFundMe campaign helped her raise over $6,000 to make it happen.

"It's been crazy, honestly," she said Saturday. "It's super exciting; I'm super glad with the turnout and everyone who came."

More than 1,000 people RSVP'd to Bailey's Facebook event; the crowd that gathered to attend included LGBTQ people whose birth dates span decades and whose experiences mirror the growing strength of the movement for legal equality in marriage, the military and public life.

Some, such as 62-year-old Dennis Wickline, were born when the American Psychiatric Association considered homosexuality a symptom of mental dysfunction and the dream of same-sex marriage felt quixotic at best. Others, like Bailey's 18-year-old classmate Izzy Duron, have always inhabited a world in which prominent public figures such as Ellen DeGeneres can be openly gay.

None have lived without facing some hardship -- DeGeneres lives a long way from Bartholemew County -- but all said they believed events like Columbus Pride represented a step forward for their community's internal politics as well as its image in the eyes of the world.

"It was really hard for me to come out due to how my family was very religious," Duron said. "I appreciate how the people here are providing a very loving environment."

READ: We asked Duron, Bailey and others what they wish Pence knew about their community

Although one of the festival's goals was to help Columbus grow beyond its association with the vice president, another was to offer a direct rebuke of his policy. He attended in playful effigy throughout the event, from signs reading "No pride in Pence" to the presence of Glen Pannell, who flew from New York City to appear at the festival as "Mike Hot-Pence."

Hot-Pence's "Friends"-white hair is as coiffed as his shorts are short. Pannell has been making appearances as the vice president's gay-friendly doppelganger since the month after the 2016 election, he said.

"I think (Columbus Pride) is an historic event, and I wanted to support Erin Bailey in her mission to show the world what a welcoming and inclusive and diverse place her hometown is," he said.

Flanked by drag queens on the festival stage, Democratic county council candidate Hanna Omar raffled off a copy of "A Day in the Life of Marlon Bundo," a children's book penned by comedian John Oliver as a parody of the White House's official "A Day of the Life of the Vice President." In the White House-stamped book, First Bunny Marlon Bundo hops through an educational look at the office of vice president; in the Oliver book, he falls in love with another male rabbit and overcomes opposition from a "stink bug" who opposes the relationship.

While the raffle took place, vloggers from LGBTQ news outlet Queerty threaded through the crowd in search of people who would ask, on camera, "Mike Pence, who hurt you, honey?"

And Pence was ever-present in the perspectives of attendees, some of whom share Pence's commitment to Christianity but disagree with the way he interprets the Bible.

"I believe so much in unity and the divine presence of God in everybody," Ann Jones, who represented the First Presbyterian Church of Columbus at the event, said.

Willman, who grew up within the Missouri Synod and maintained a strong evangelical faith after he came out, said he sees no conflict between his identities as a Christian and a member of the LGBTQ community.

"I take comfort in the fact that I have found God loves everyone," he said.

And the congregation of drag queen Oriana Peron ended the festival by accepting all parishioners. In lime green eyeshadow, a gold sequined leotard and a multicolored sash, Peron performed to Kesha's "Rainbow" and Sia's "Alive" for a crowd whose members cried, cheered and raised single fists of solidarity.

Then the music stopped. The rain that had hovered over Columbus all morning fell. Holding rainbow flag-capes over their heads, attendees scattered back to their cars.

The three-hour spell that Columbus Pride cast over two city blocks was dispersed.

But not broken. Jenna Hashagen, 18, said she believed her home town and state were creeping closer to a more LGBTQ-friendly culture.

"It is really progressing," she said. "Even though our state is red, that doesn't mean all of us are. One sentiment doesn't completely cover all of us."

For his part, the vice president issued a single statement on the event.

"Vice President Pence commends Erin Bailey for her activism and engagement in the civic process," press secretary Alyssa Farah told CNN. "As a proud Hoosier and Columbus native, he's heartened to see young people from his hometown getting involved in the political process."

Bailey told Bustle before the event wasn't sure if Pence's congratulations were sincere. Hashagen said it doesn't matter.

"We're here, we're queer, and we're not going to listen to his agenda," she said. "He does not define our town. Columbus is Columbus."