The LGBTQ community deals with staggering rates of drug addiction 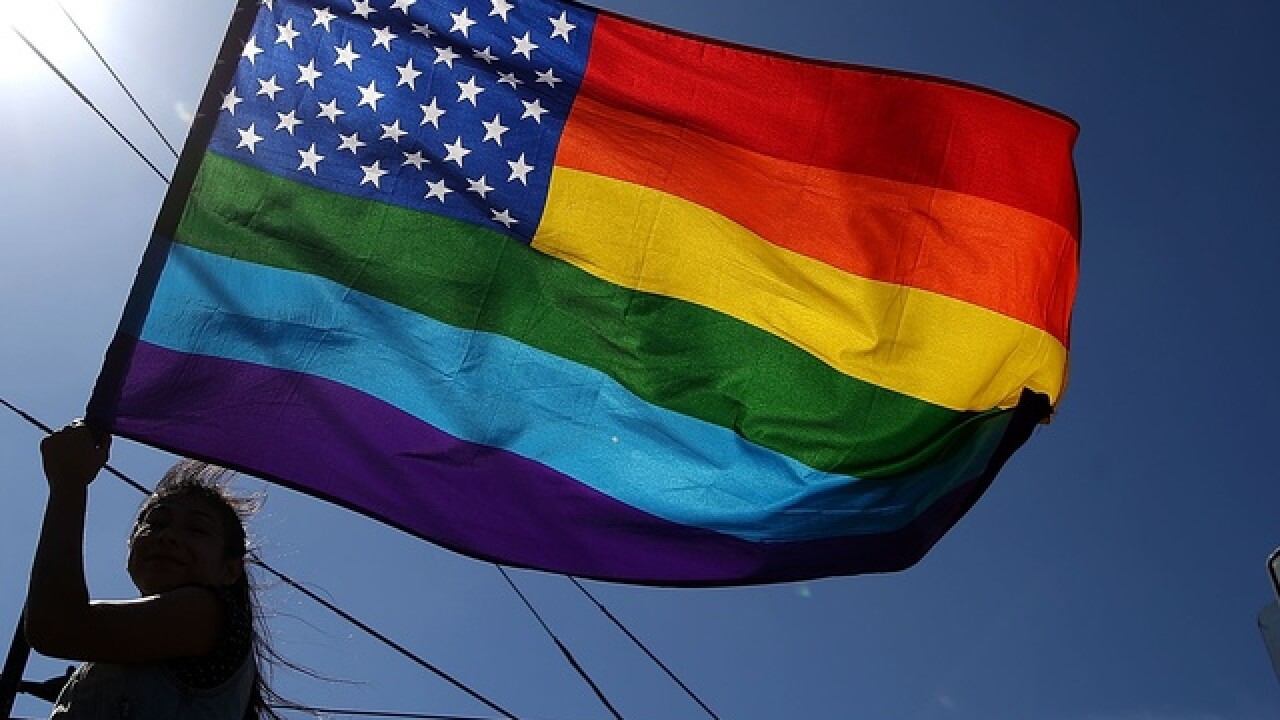 Copyright 2017 Scripps Media, Inc. All rights reserved. This material may not be published, broadcast, rewritten, or redistributed.
Justin Sullivan
<p>SAN FRANCISCO, CA - JUNE 26: A same-sex marriage supporter waves a pride flag while celebrating the U.S Supreme Court ruling regarding same-sex marriage on June 26, 2015 in San Francisco, California. The high court ruled that same-sex couples have the right to marry in all 50 states. (Photo by Justin Sullivan/Getty Images)</p>

He'd been a frequent drug user since the age of 15, when his coming-out was met with swift familial rejection and he tried crystal meth. Gay said he spent years drifting along the East Coast in an amphetamine fugue supplemented by opioids and punctuated by overdoses.

"Days go by, and when you finally come to, you're depressed," the 34-year-old said. "Then you go back to the thing that was the reason you got there in the first place."

By the time he landed in a Lexington rehab, he had spent three months in a Versailles jail and overdosed three times in the first two months of 2017. The third time, in February, first responders administered four shots of naxolone without success. Only the fifth brought him back, he said.

But entering the rehab center, which Gay declined to name, felt to him like trading the shiftless anonymity he'd inhabited on the street for the laser-sharp scrutiny of people who weren't interested in treating all of him. The other patients were also drug users, he said, but he was the only one who was openly gay.

So he left. Within 24 hours, he was using again.

On Sept. 23, Gay -- 40 days sober, an NKY Hates Heroin band around his wrist -- sat in front of a campfire in Kincaid Lake State Park with a community he had never expected to find.

He discovered in Covington what he had wished for in Lexington: A community of lesbian, gay, bisexual and transgender people who shared his struggle with addiction and recognized a link between their fight for personal acceptance and their fight to get clean.

A first-of-its-kind local organization called GLAST -- Gays and Lesbians Achieving Sobriety Together -- helped Gay find a sober house where he felt comfortable staying and supported him in making a long-term commitment to sobriety. He's been attending GLAST meetings and "attractive alternative" sober events such as the Kincaid Lake camping trip ever since.

On the night after he left rehab, Gay recognized he had little time to make another effort at sobriety. He had heard about GLAST from community outreach coordinator Christopher Crout during one of Crout's many visits to local jails, and he had Crout's number on hand.

Although the organization was then brand-new -- officially founded May 5 by longtime friends Martin Warne and Stephanie Schraer -- it seemed like his best shot.

"I said, 'I know where this is going. For three days, I was out there again, and I don't want that life back,'" Gay said. "I called Chris, Chris called Martin, and Martin had me in Covington the next day."

A 2012 study by the Center for American Progress found LGBTQ Americans like Gay statistically experience higher rates of substance abuse than their straight counterparts and encounter greater obstacles to effective, non-judgmental treatment.

The National Institute on Drug Abuse agreed in 2015, adding: "LGBT persons also have a greater likelihood than non-LGBT persons of experiencing a substance use disorder (SUD) in their lifetime, and they often enter treatment with more severe SUDs."

GLAST, the Center and NIDA attribute much of this to "minority stress" -- the aggregation of daily stigmas and social slights that contributes to members of a minority feeling unwelcome in the societal mainstream. If the appeal of hard drugs lies in their offer of escape from negative emotions, people who live with the day-to-day hardships of discrimination, estrangement from family and homelessness are among the most vulnerable to their poison promise.

Another factor, Warne said, is the longtime restriction of LGBTQ-friendly spaces to environments where drugs and alcohol are highly present, such as gay and lesbian bars. For Warne, a recovering crystal meth user, frequenting Los Angeles's gay club scene meant drugs and intimacy became inextricably linked, and giving up the former seemed to mean giving up the latter as well.

The difference between Los Angeles and his hometown of Newport, he added, was that Los Angeles had readily available resources meant specifically for LGBTQ people dealing with substance abuse. Newport, he said, had none.

"In 2012, I was in the depths of my crystal meth addiction," Warne said. "I remember getting online and doing a search for LGBTQ recovery services, and there was nothing. I already felt alone admitting that I had a problem with drugs and alcohol, and then I felt alone when it came to my sexuality."

According to the National Institute on Drug Abuse, just 7.5 percent of drug rehabilitation facilities offer any specialized services for LGBTQ patients like Warne, Crout, Gay and the community they hope to serve.

'I just kept thinking about it'

During his yearslong period of crystal meth abuse, Warne said he bounced on and off of friends' couches, including Schraer's. The pair had attended high school together in Newport and stayed in touch -- and sometimes in the same home -- while she trained to become a clinical therapist and he took steps toward sobriety.

Drug issues had always been present in Schraer's family, she said, and witnessing them firsthand drove her to study addiction -- first in search of understanding, then in search of solutions.

Her friendship with Warne, who now works at a rehab and detox facility, helped her see an angle she said many drug rehab programs and counselors miss: Even when LGBTQ people seek addiction recovery resources, they can be crowded out or scared away by programs that are accepting of recovering drug users but not accepting of same-sex desire.

"They deal with things like feeling unsafe in a residential environment, feeling misunderstood by counselors, unpacking additional trauma," Schraer said. "Sometimes you don't think of those things."

"I just kept thinking about it," he said. "I don't want anyone to go through what I went through, and I've seen it. I've seen people who identify as LGBTQ-plus who kept relapsing, who kept going back, and they're not staying clean and sober.

"That's when I said, 'We're going to do it.' I called Stephanie, I made espresso shots, we sat at the kitchen bar and we just started searching."

More than half of Kentucky voters remained opposed to same-sex marriage as recently as 2015. A Kentucky clerk of courts, Kim Davis, built an international platform on her refusal to issue marriage licenses to same-sex couples.

But Warne said the Northern Kentucky community's positive responses to his organization's mission have far outweighed the negative.

"There are people who believe that being gay is a choice and substance use is a choice, so you put two of those things together and it's like, 'Whoa,'" he said. "We're still going to have that, but most everyone has been super supportive and welcoming."

GLAST members now meet every Wednesday in the basement of Covington's First Christian Church, attend monthly "attractive alternative" events such as brunch, camping and skating and partner with community organizations such as Love Must Win, NKY Hates Heroin and Cincinnati Pride. Around 60, including Warne and Schraer, marched in the 2017 Pride Parade just over a month after their organization's official start.

Of all the things she's done since helping to start GLAST -- including connecting drug users with recovery resources, driving them to rehab centers and helping them find hot meals -- Schraer said the parade was her favorite.

"We held up signs that said, 'Clean and sober' with our clean and sober date," Warne said. "It was such a beautiful response from the community. As we walked by, we heard people yelling out, 'I'm sober too! Nine months here, six months here.' And there were a lot of people just saying, 'Good job.'"

GLAST formally became a registered nonprofit in September, and Warne said he hopes it can expand to help even more people in coming months and years. The organization will host its first fundraiser, a drag show with free barbecue titled Queens for Recovery, Dec. 3. Proceeds from the event will contribute directly to helping place LGBTQ drug users in treatment programs that will, Warne and Schraer hope, change the devastating statistics surrounding the gay community and drug abuse.

In 2010, LGBTQ celebrities from all over the world posted to YouTube their promises that "It Gets Better" for children growing up with non-normative sexual and gender identities. In the seven years since, same-sex marriage became legal in all 50 states, transgender stars such as Laverne Cox and Caitlyn Jenner made Hollywood headlines, and public support for LGBTQ rights grew steadily.

But there's still a mountain of work to do, especially for people who don't have a Jenner's wealth, security or public platform on their side.

Schraer, Warne and all the members of GLAST believe it can and should get better still -- for everyone.

"We're still so new," Schraer said. "But we have so many ideas."