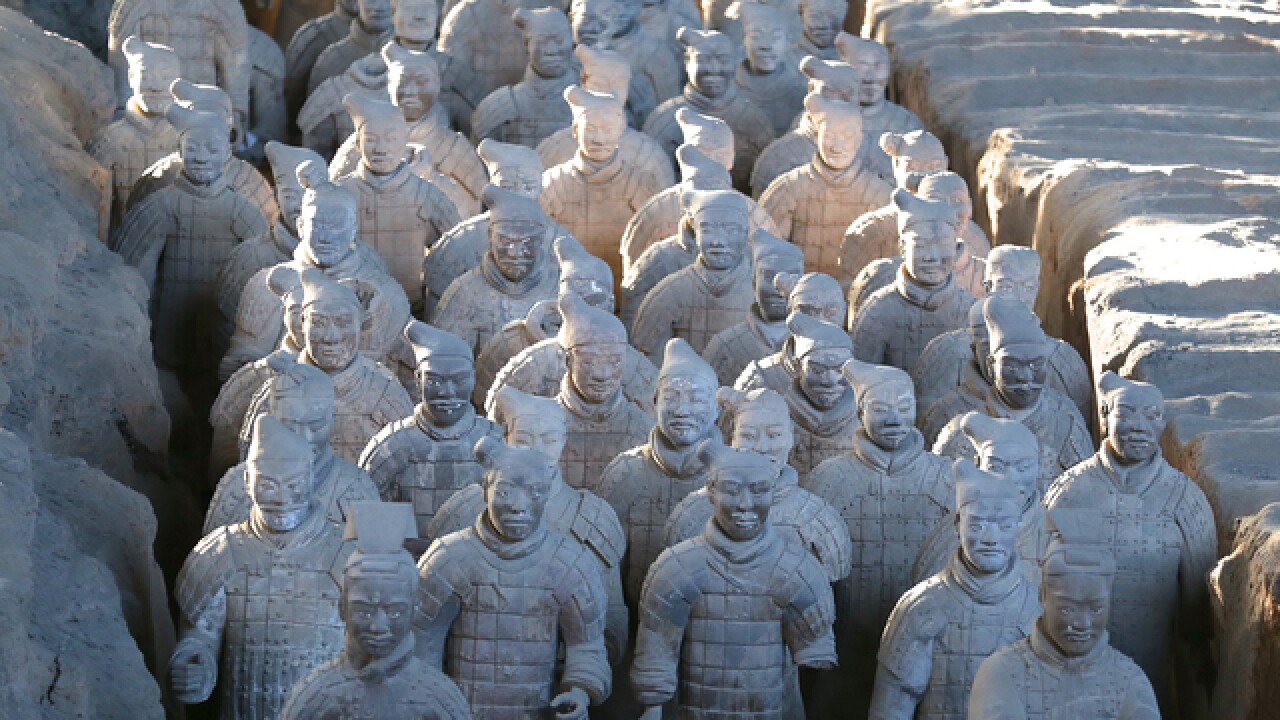 Copyright 2018 Scripps Media, Inc. All rights reserved. This material may not be published, broadcast, rewritten, or redistributed.
Emily Maxwell | WCPO
<p>More than 120 artifacts from the first emperor of China's reign will be on display, including 10 terracotta figures and pieces never before shown outside of China, will be on display at the Cincinnati Art Museum.</p>

Chinese farmers were digging a well in a rural area of Xi'an, China in 1974 when they came across pieces of what appeared to be ceramic armor.

No one knew what it was at first.

Turns out, the farmers had discovered more than 8,000 clay soldiers standing guard at the tomb of Emperor Qin Shihuang. It would become one of the greatest archaeological discoveries of the 20th century.

Known today as the Terracotta Army, the soldiers are part of Emperor Qin's intricate necropolis that encompasses more than 20 square miles.

Those who have seen the Terracotta Army in person say they will never forget the first time they set foot at the ancient site.

And Cincinnati will get the chance of a lifetime to see some of the Terracotta Army without having to travel outside of the city.

The last leg of the "Terracotta Army: Legacy of the First Emperor" tour will arrive at the Cincinnati Art Museum on Friday, April 20. It's the first time the terracotta warriors will be on exhibit in the Queen City.

The exhibit is the result of a collaboration with the Virginia Museum of Fine Arts, where it first opened last fall. Together, they spent years partnering with 14 museums in the Shaanxi Province to bring this exhibit to the United States. It includes pieces never before shown outside of China.

WCPO is a media sponsor of this new exhibit at the Cincinnati Art Museum. The museum paid to have a group from Cincinnati, including WCPO photojournalist Emily Maxwell, experience a behind-the-scenes tour of the ancient sites and museums working to preserve the first emperor's legacy.

"The Terracotta Army is something Cincinnatians haven't seen in our city," Kitchin said. "Our work of bringing the terracotta army to Cincinnati is the only way many of our citizens will ever experience these great objects of art."

Life and legacy of the First Emperor

The Terracotta Army is located in the ancient capital city of Xi'an, which is credited as the birthplace of Chinese civilization. Today it's a modern city with more than 8.5 million people that can't build high-rise units fast enough to keep up with its growing population. An endless supply of construction cranes run parallel to the highways.

Born as Ying Zeng, the soon-to-be first emperor started construction for his mausoleum when he came into power as king at age 13. By the time he turned 38, he defeated China's warring states and named himself Qin Shihuang, meaning "first emperor."

He was the first person to unify China as an empire. Some of his accomplishments as emperor include establishing a national currency, creating a metric system, building roadways and constructing the Great Wall of China. The first emperor was a force never before seen in China, and he set the stage for the next two centuries.

"That's hard for us to grasp today to say that an individual could bring together the warring states of an entire nation and an entire empire as large as China," Kitchin said. "But amazingly enough, he began this work at age 13."

The mausoleum complex is an impressive site that sits along the mountains in Xi'an. It includes the estimated 8,000 terracotta warriors, the emperor's tomb, an inner and outer walled section and its own road system. All of which was buried in the ground with earth, bricks and wooden beams.

The emperor's tomb faces east at the bottom at Mount Li and remains untouched to this day.

"You can clearly see his ambition and how he wanted to almost reproduce how he accomplished the unification of China," said Hou-mei Sung, curator of Asian art at the Cincinnati Art Museum. "He wanted the underworld to reflect this. The 8,000-life size army, civilian officials, court life, entertainment, all those aspects of his life time were reflected in this underground tomb."

The Terracotta Army was discovered about a mile from his burial site. The soldiers are divided into three pits where excavations are ongoing. A vacant fourth pit was discovered, which experts believe was abandoned and never finished.

Born in China and raised in Taiwan, Sung has spent decades studying and teaching about the Terracotta Army. She's excited to bring this exhibit to her adoptive home.

"Even though I didn't live most of my life here, we have been learning about Chinese history and culture growing up and to be able to identify with this new discovery makes it a far more exciting," she said. "I've learned new aspects. It's different than reading about it."

Only about 20 percent of the army has been excavated thus far.

Archaeologists continue to learn new techniques to carefully survey the area and unearth these ancient artifacts. Tourists visiting the Terracotta Warriors and Horses Museum in Xi'an can walk around each of the pits and observe their progress from a distance above.

"I think even the Chinese learned quite a lot as they work on those materials because it's quite a challenge to deal with many of these things for the first time," Sung said. "I think it's exciting for everyone that we are learning how to restore the colors and the bronze water birds. All of this is a learning process."

Institutions like the Shaanxi Provincial Institute of Archaeology are responsible for restoring artifacts found at the site of the emperor's mausoleum. Over the decades they have uncovered new clues into ancient Chinese culture. In January, archaeologists were in the midst of restoring a bronze goose made specifically for the emperor's burial.

"We focus on these objects because it's important for two reasons: Because it's related to the first emperor and it's the first group of bronze sculpture in our history," said Shao an Ding, director of lab conservation.

Over the years, 46 bronze birds have been recovered from the mausoleum which includes 20 geese, 20 swans and six cranes. An Ding said the detail and residue of pigment on the bronze figures may depict possible outside influences never before seen in the pre-Qin era.

"All of these techniques are similar to bronze sculpture from the Egypt bronzes," an Ding said. "There's some influence or interaction between the two places. Unfortunately...with western Asia and the Middle East, we don't know how they interacted."

Historians believe Emperor Qin had more than 700,000 people constructing his mausoleum over the course of 30 years. It wasn't finished until two years after his death in 210 B.C.

The first emperor had an unquenched desire to seek immortality that some believe led to his death. Some suggest he died from ingesting mercury pills or an elixir containing mercury as a means of achieving longevity. He died at the age of 49.

Emperor Qin's reign left a lasting impression that shaped future empires and generations. He was a brutal ruler, often executing those who disagreed with him, but he forever changed the political and social landscape, laying a foundation for generations to come.

Since its discovery, only about 10 percent of the first emperor's mausoleum has been excavated. Virginia Museum of Fine Arts director Alex Nyerges has visited the site more than a dozen times over the past two decades. He still remembers the first time he saw the warriors in person.

"It literally took my breath away," Nyerges said. "Probably the more amazing thing is that every time the response is the same."

Nyerges and Li Jian, the curator of East Asian Art at VMFA, partnered with Kitchin and Sung to bring this exhibit to the United States.

The exhibit shows 120 objects from the Qin Dynasty collected from 14 museums in the Shaanxi Provence, including the Shaanxi History Museum and the National Museum of China. About 40 of those pieces have never before been shown outside of China.

"This exhibit is an effort for us to really bring the greatest art treasures in the world to America and there's no greater archaeological treasure than the army of Emperor Qin, the first emperor of China," Nyerges said.

In the four months it was on display at the VMFA, near Washington, D.C., the museum saw more than 204,000 visitors. Cincinnati is hopeful the exhibit will draw big crowds, but more importantly that visitors will appreciate this rare opportunity.

"I hope they get excited and learn about how the Chinese civilization started and how the foundation of Chinese culture really started at this time," Sung said.

For museum leaders in China, it's more important than ever to preserve the emperor's legacy and share this history with the world. In 2017, the Shaanxi History Museum had more than 15 times the number of objects on loan as part of this effort, which includes the exhibition traveling to the Virginia Museum of Fine Arts and the Cincinnati Art Museum.

"We hope through those exhibitions, people from the United States will be interested in our culture. I hope more people will join in this effort to protect cultural relics and experience our Asian wisdom," Yue said.

The National Museum of China in Beijing, which is seven times the size of the Cincinnati Art Museum, has more than 1.4 million objects that tell the story of China through relics dating back thousands of years.

"The sense of scale not only physical scale, but scale of timelines is different in China. We in America may think in decades and centuries, but in China the thought is much more in millennia. The relevance of the Terracotta Army to contemporary culture is even more palpable on the ground here in Beijing and Xi'an," said Kitchin.

In Cincinnati, visitors will be able to see 10 terracotta figures, including soldiers, a horse and chariot, jewels, bronze vessels and birds, among other relics from the Qin Dynasty.

Named a World Heritage site by UNESCO, the Terracotta Army and the emperor's mausoleum continues to teach archaeologists and historians about ancient Chinese culture as they carefully recover artifacts from this ancient site.

For those unable to make the trek to Xi'an and Beijing, a $16 exhibit ticket could take you on the trip of a lifetime, right here in Cincinnati, without having to travel 7,000 miles.

The exhibit runs from April 20-August 12.

"Terracotta Army: Legacy of the First Emperor of China"