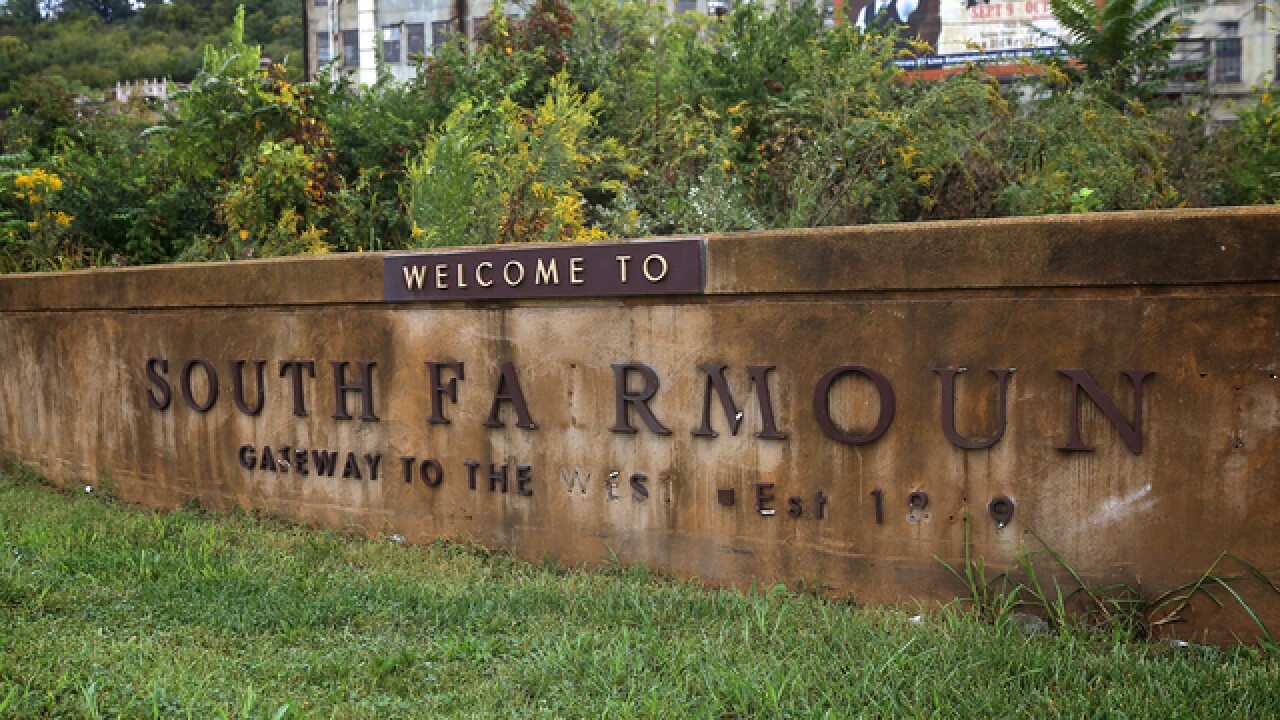 Some forgotten neighborhoods have been neglected for so long that neighbors have joked they’d like to tear everything down and start over again.

The biggest transformation in South Fairmount’s long history is under way. The neighborhood business district, run down as it was, is gone. This summer, work crews demolished nearly 100 buildings along Queen City and Westwood avenues.

They’re making way for a makeover on a scale that few urban neighborhoods are likely to ever see. This transformation will be built around what will be a very attractive, well-landscaped … sewer.

But it will not be a run-of-the-mill sewer, it will be an “urban waterway” that will carry rain water, not sewage. Planners envision an attractively landscaped, walkable, park-like waterway that will go by the pastoral name of the Lick Run Greenway.

And the neighbors are thrilled about it.

If all goes according to plan, the project will result in a 1.5 mile long manmade, yet meandering, waterway coursing down the middle of South Fairmount. It is a linchpin of the largest public works project in Cincinnati history -- the $3 billion-plus rebuild of the sewer system that will separate rain and storm runoff from sewage.

Now, stormwater and sewage both flow into the same pipes, and when it rains hard, the pipes overflow. In South Fairmount alone, that means a billion (that’s billion with a B) gallons of sewage-infested water overflowing into the Mill Creek, and ultimately the Ohio River.

The problem is so bad that the U.S. Environmental Protection Agency has ordered the Metropolitan Sewer District to fix it.

That makes this long-neglected neighborhood now the center of attention, as this $100 million portion of the MSD project is under way.

Fortunately for the neighborhood, the project is more than a mere storm sewer, which is why the neighbors are so optimistic about it.

Here’s what else is planned: A “headwaters” park with off-street parking; a pedestrian bridge; a pond, lighting, vehicle bridges, and maybe most appealing – trees, flowers, grasses and walkways.

It will be, in effect, an urban park, stretching from State and Beekman streets west to old Queen City Avenue.

But will it all happen as planned?

“The end result will be a tremendous increase in quality of life in the neighborhood,” he said.

That will be welcome news for a neighborhood that’s been in decline for decades.

Most people probably know the neighborhood as a place they drive through to get somewhere else.

Queen City Avenue is a major westbound thoroughfare that runs from South Fairmount into the Westwood and the Price Hill neighborhoods. Westwood Avenue runs eastbound to the Western Hills Viaduct, Central Parkway, Interstate 75 and Downtown.

“We’re a pass through,” said longtime resident Jo Ann Metz, who lives on Queen City. “They drive through here, honk and throw garbage all over the place. It’s just what we’ve put up with forever.”

It wasn’t always that way. South Fairmount was once a self-contained community, where one could work, live and relax.

“It really was a village,” said Jacquie Chischillie, a 53-year-old who grew up in South Fairmount and moved back in 2004. Grocery stores, hardware stores, drug stores, eateries. “We felt safe going to those places and just hanging out with friends after school and on weekends.”

The neighborhood was the home of the Lunkenheimer Valve Co., where 2,000 people worked in its heyday in the 1950s. Lunkenheimer closed in 1968 and the complex is now a hulking, rusting five-story shell, a symbol of a neighborhood in decay.

Other neighborhood institutions have disappeared.

St. Bonaventure Church, “St. Bonnie’s” to its former congregation, once the scene of Sunday Mass, bingo games and festivals, was demolished in 2005.

The foreclosure crisis hit South Fairmount harder than any neighborhood in Cincinnati. Between 2006 and 2013, 236 homes were sold in foreclosure sales, nearly 18 percent of its housing stock, according to a report by the Working in Neighborhoods organization.

More than 47 percent of the neighborhood residents live below the poverty level, compared to 31 percent in all of Cincinnati.

South Fairmount was first settled by German immigrants in the early 1800s, followed by immigrants from Italy. But after World War II, as the suburbs developed, many moved west to the greener landscapes of Westwood, Bridgetown and Mt. Airy.

The neighborhood’s small, aging houses built close to the street became undesirable for homeowners and many were bought up for rentals.

“One of the things I noticed when I came here was we had a lot of out-of-state landlords, a lot of blighted properties and there really wasn’t an easy way to entice those folks to do something with those properties,” said Jim Casey. He’s a native of Watertown, N.Y. who moved to South Fairmount 10 years ago and is now president of the neighborhood community council.

Over the decades, neighborhood employers closed or moved, housing deteriorated and people moved out.

Not too many years ago, Immanuel United Church of Christ on Queen City was home to a congregation of 450 people. It’s dwindled to 25.

The small but dedicated congregation of Immanuel United saw what was happening in the heart of the neighborhood. Nancy Holtkamp has been a member of the church for all of her 69 years.

“A few years ago, we started seeing people sleeping on the porch; we would find needles and drug paraphernalia,” she said. “We would know of arrests in the parking lot; shootings all around the church. I guess what struck us most was the population that was sleeping on the sidewalks.”

“One day, we just said we need to take care of these people. We need to feed them.”

That began a weekly ministry of hot meals, a coat drive and more – a human connection.

Thankfully, Immanuel United, with its 91-year-old church building, will remain after the project is completed.

“I think it’s a positive thing for the neighborhood, if they don’t stop there but look forward to the future and bring something else in.”

Pastor Bud would like to see housing built, maybe condos.

Others would like to see traffic slowed on the main thoroughfares of Queen City and Westwood avenues.

The speed limit is posted as 30 mph on Queen City and 35 mph on Westwood, and both are routinely ignored.

Sometime in the ‘70s, both Queen City and Westwood were converted from two-way streets to one way in order to move traffic more quickly.

“Sometimes it looked to us like they were looking for reasons to wipe us out down here and make it one big highway,” Metz said.

Changing the streets back to two-way would help slow traffic and create a better neighborhood environment and is supported by people who live there.

“It would make it more of a community neighborhood if we had two-way streets,” said Jacquie Chischillie.

“We didn’t have near the problems with two-way streets as we do with one ways,” Metz said.

Slowing the traffic is certainly a need in this pass-through neighborhood. But its future will depend on how the Lick Run project turns out.

We have a little church in South Fairmount to thank for the birth of that staple of Cincinnati dining, LaRosa’s.

In the 1920s, ‘30s and’40s, the summer festival of San Antonio Church on Queen City Avenue was where the “ladies of the lot” made and sold what was then a unique and exotic dish – Italian pan pizza.

Buddy LaRosa made pizzas for the festival along with his grandmother Josephine and his Aunt Dena. People came from all over to try it.

Using the family’s festival recipe and some borrowed money, Buddy and partners started Papa Gino’s pizza, which evolved into LaRosa’s, today a franchise of 64 restaurants around the region.

The church still survives today, thanks to its faithful congregation. Faced with closure about 10 years ago, the members raised money to keep it alive.

“There’s a lot of people who are really dedicated to keeping that church going,” said Buddy’s sister and loyal church worker, Terrie Evans.

San Antonio is now technically part of Holy Family parish in East Price Hill, but still holds a 9 a.m. Mass on Sundays with a rotation of priests.

San Antonio counts on about a hundred members to keep this little church in the heart of the neighborhood alive. “I think it’s inborn in us,” Evans said. “We just work to keep it going.”

For the neighborhood to benefit, the undertaking must be more than a sewer separation project. City, county and MSD officials should ensure that the plan’s park-like features, its greenspace and its landscaping come to fruition and beautify this forgotten community.

South Fairmount has long been a conduit for the sewage and runoff of much of the West Side. Its topography -- steep hills descending into a wide valley -- was perfect for building gravity-fed sewers that drained to the valley and then to the Mill Creek.

Decades ago, the natural creeks and waterways of the hillsides were seen as logical pathways to lay sewer pipe. These streams were ultimately lost to the construction of the region’s sewer system.

Lick Run was, in fact, a natural waterway a hundred years ago. The sewer district buried it in a massive sewer pipe that is more than five feet wide in some places. That’s why the current project is sometimes referred to as the “daylighting” of Lick Run.

Kudos to MSD planners who designed a green, economical solution to the sewer overflow problem. The plan is about $200 million less than the original plan, a plan that would have entailed building a massive underground tunnel and a sewage plant in South Fairmount.

It’s not only economical, the Lick Run Greenway plan has the benefit of a creating a mile-long park that will improve the face of long-ignored neighborhood. But plans can change, and the project won’t be complete for another two years.

“You put your faith in it and your cross your fingers,” said Jo Ann Metz. “You hope it’s gonna be what they said it’s gonna be.”

Cost pressures and changes could lead the city and county officials who run MSD to rethink the green aspects of the project.

We hope not. Along with the neighborhood, we will be watching to make sure the promises are kept.

Please read the rest of this series:

Neighborhood update: Cincinnati City Council agreed in September to award $350,000 to Mount Airy CURE (Community Urban Redevelopment Enterprise) to purchase and stabilize two acres of property at North Bend Road and Colerain Avenue, the gateway to the neighborhood business district. The community group has worked on securing the property for nearly two years.