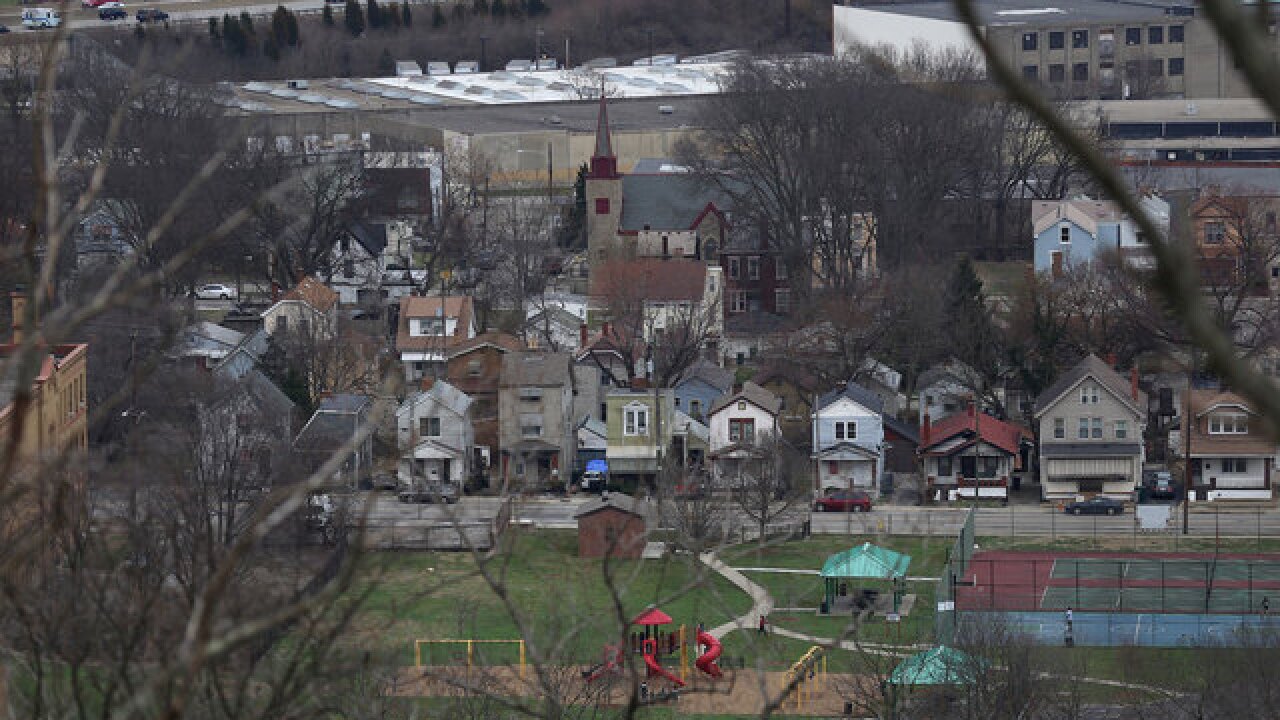 Copyright 2017 Scripps Media, Inc. All rights reserved. This material may not be published, broadcast, rewritten, or redistributed.
Emily Maxwell | WCPO
<p>Beekman Street, with Wayne Playfield in the foreground, is the main artery in South Cumminsville.</p>

It’s just a public bathroom in a public park. But when you wait for 20 years for it … well, that’s a long time to wait for the restroom, right?

After 20 years of waiting, the people of South Cumminsville finally got a real restroom at Wayne Playfield, their neighborhood park, last spring. So they threw a party, dubbed it the Royal Flush and even declared a king and queen who honorably inaugurated the facilities.

“Twenty years later, we finally got it,” said Marilyn Evans, the longtime president of the neighborhood community council. “After they told us, ‘We don’t build bathrooms in the parks anymore.’ But we were consistent, and we finally got it.”

City Hall may have forgotten about South Cumminsville’s restroom needs, but the neighbors didn’t let them forget.

South Cumminsville is a “pull-yourself-by-the-bootstraps” kind of neighborhood, one community organizer says. When the residents see something that needs fixing, they organize around it, whether it be a broken, unsafe sidewalk, a safer route for kids to walk to school or brand new his-and-her restrooms that actually flush.

But South Cumminsville has problems that the neighbors can’t fix on their own.

The demands of commerce and industry have dominated South Cumminsville for much of its history. The B&O railroad line bisected the neighborhood, carrying pigs and cows to nearby slaughterhouses and ferrying the circus to town.

South Cumminsville and Northside were once a village called "Cumminsville." In 1845, it was named after David Cummins, a businessman who built a tannery that he lost in a disastrous feud. Ephraim Knowlton (Northside's Knowlton's Corner is named after him) bought the property, subdivided it and christened the settlement Cumminsville.

The construction of Interstate 74 and its on-ramps to I-75 took out houses and created the kind of dead zone that highway overpasses typically do in residential neighborhoods they cut through.

A Truckway depot, while a welcome investment, is also the source of regular semi-tractor traffic on South Cumminsville’s narrow streets.

The neighborhood is one of the poorest in our community, with a median household income of just under $18,000, half of what it is in the rest of Cincinnati.

Its population has declined, until now only about 1,700 people live there.

More than half of its citizens own the homes they live in, an unusually high rate for a city neighborhood, especially for one with so many people in the depths of poverty.

Home ownership is a strength of the neighborhood and something that can be built on. But, in recent years, what residents have mostly witnessed is contraction. The Great Recession that began in 2008 brought a wave of foreclosures that caused some homeowners to lose their homes. Many of the houses stayed empty. Just over 26 percent of the houses in South Cumminsville’s census tract are vacant, more than double the rate in all of Hamilton County.

Some were in such bad shape they needed to be torn down. Since 2007, the city of Cincinnati has torn down 29 houses, at a cost of $308,000, city records show. Wouldn’t it be great, some lamented, if the city, the state, or someone would invest the kind of money in fixing up homes as they have in tearing them down.

South Cumminsville holds a place in my family history.

My mother grew up there in the 1930s and ‘40s and would occasionally tell a childhood story or two about the neighborhood.

She was actually born on Clark Street in West End, but at some point the family moved to Elmore Street in South Cumminsville. Her father held various jobs, including a police officer, and, for a time, railroad work.

Her mother was a cook who worked at some of the factory cafeterias in the neighborhood, and also worked in the kitchen at Weber’s Café, the diner and watering hole that just closed its doors in 2013 after 122 years in business.

When the 1937 flood swamped their home and so many others, the family was evacuated by rowboat, and went to live with my mom’s cousins for nearly a year on the dry ground of Price Hill. My grandmother the cook made a big pot of soup to take with them, and set it on the stoop while they waited for the boat to take them away. My mother would still ruefully recall the stray dog who got into the homemade sustenance and ruined it.

The railroad that ran through the middle of the neighborhood provided occasional excitement. Like the time a carload of pigs got loose and ran through the streets. Barnum and Bailey and the Ringling Brothers would bring circuses to town on the railroad. Sometimes, the circus train would be stopped nearby, providing an opportunity for a free glimpse of the performers and animals, until Mom and her friends were run off.

Mom passed away in June of 2016, but I know she kept those memories until her last days.

Saundra Davis has lived in the neighborhood for 25 years. The 61-year-old now lives on Neyer Street. Her aunt also lived on Neyer. When her aunt passed away, Saundra’s sister and brother-in-law bought the house. Then Saundra and her mother bought a house across the street. Then Saundra’s daughter, son and daughter in law all moved to the street too.

That’s not unusual. Seventy-year-old Roy Davis lives in what he calls a “generation house.” It’s been passed down from Roy’s uncle to another uncle and then to Roy’s brother. It’s been in the family 40, maybe 50 years. “It’s hard to say,” Roy remarks.

If you mention South Cumminsville, sometimes people ask, "Where's that?" Usually, the first landmark that comes to mind to situate the neighborhood is Mr. Gene's Dog House. Mr. Gene’s and its orange-and-white drive-through have been serving up chili dogs, hot metts and malts on Beekman Street for 55 years.

For 51 one of those years, Zerita Andrews has been behind the counter.

That’s one reason she has stayed so long, and even brought in her daughters, 35 and 32, who also work there. Zerita even grew up on Beekman across the street from Mr. Gene’s and remembers the day the original prefabricated store was trucked in and constructed. That store was damaged by a truck collision. That’s when the existing version was built.

Zerita has an easy but hearty laugh and although she says she’s not so good with names, she greets regular customers with “Hi sweetie,” or “baby.”

She’s not thinking about quitting, even at age 69. Customers will sometimes ask when she plans to retire. Her answer: “When I’m no longer getting bills that I have to pay.”

But the American Dream of home ownership took a big hit during the Great Recession and the impact is still being felt today in the tear-downs and empty lots.

The houses that were torn down probably needed to be. Houses left vacant can blight neighborhoods, be magnets for crime and lower property values for everyone else.

But some long-time residents saw the houses coming down and had wondered if anything would replace these now-empty spaces.

The 55-year-old Canady, it should be noted, owns a small remodeling company and has put his skills to work on many homes in the neighborhood. But he’s no short-timer looking to make a fast buck.

He’s lived in the neighborhood since he was four, first on Miller Street, then on Garfield.

In 2011, he started the South Cumminsville Reunion, a picnic and festival, that last year drew 500 people to Wayne Playfield for the celebration.

He publicly marks big birthdays and anniversaries with a display at the park. Recently, a poster and flowers celebrated the 100th birthday of neighbor Annie Shanks.

There’s others like Tim who care deeply about the neighborhood. They’d love to see the same kind of investment in rebuilding homes as there was for tearing them down. From 2007 to 2016, the city spent more than $300,000 to demolish houses in the neighborhood.

But, in South Cumminsville style, the neighbors aren't waiting around for it. One project in the works now is an “urban village” of energy efficient houses, some new, some old, to drive down utility bills, upgrade old houses, build new, green ones and sustain the tradition of home ownership.

Saundra Davis is recruiting 10 homeowners on Llewellyn Street to be part of a pilot project that Working in Neighborhoods is organizing with People Working Cooperatively, the not-for-profit that assists low-income homeowners with repairs.

Homeowners could be eligible for new windows, appliances, doors, insulation and other energy-saving, cost-saving measures. The larger aim is to create “net-zero” housing, homes that are still on the grid, but store and replace at least as much energy as they use. The result for the homeowner is no utility bill, or at least a very low one.

“Part of our goal is to lift people out of poverty,” she says.

It’s a big goal, one that's defied the efforts of much larger and better-funded organizations. But this small project in South Cumminsville deserves attention from City Council, grant makers and other funders. Maybe, one home at a time, the neighbors can show the way to a solution. If so, that deserves funding to scale it up.

Maybe it can be a model for other forgotten neighborhoods.   "It’s going to take a while, but we have a vision,” Marilyn Evans said. “I think South Cumminsville shows you what impossible looks like.”