Cut off by the bridge, Lewisburg remains in limbo 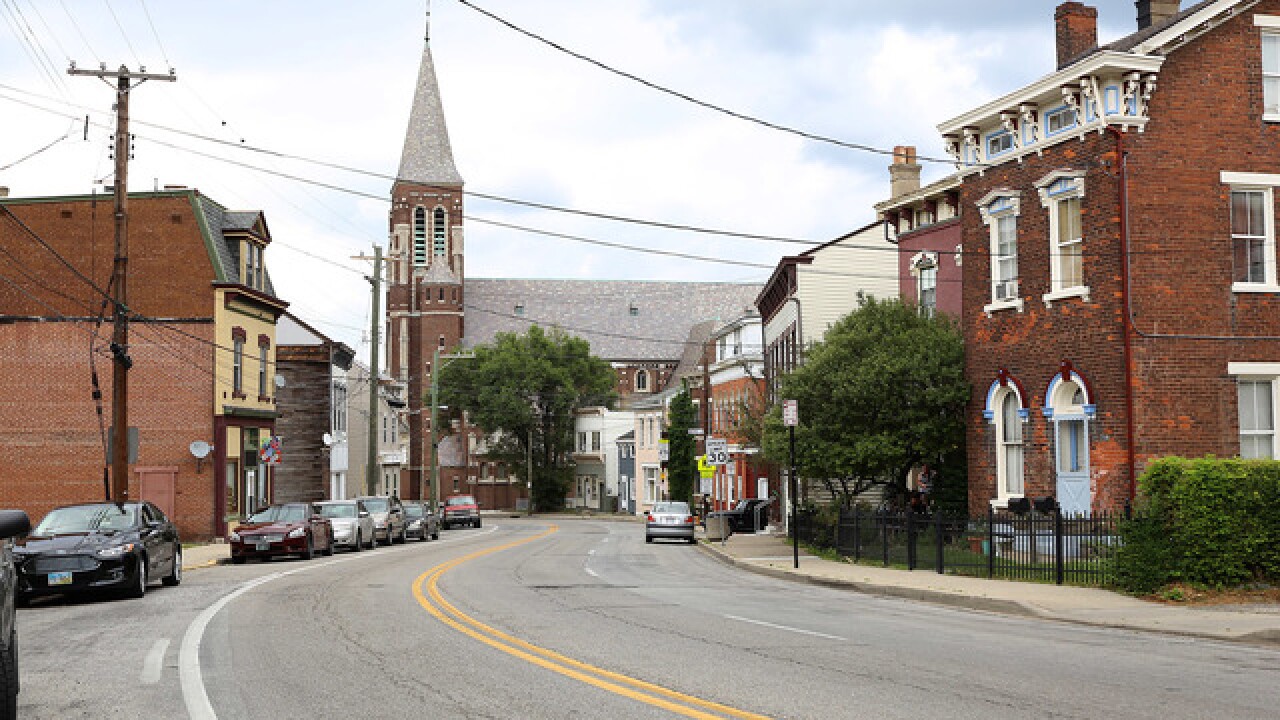 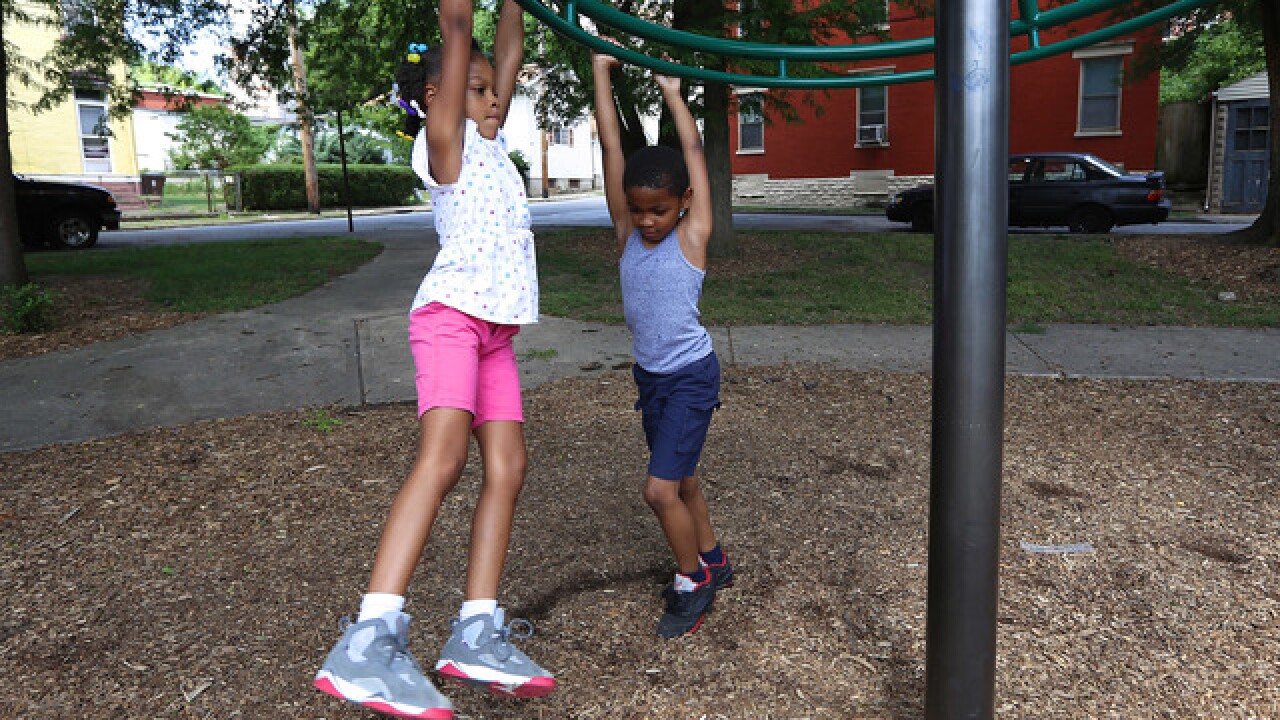 COVINGTON, Ky. -- Seven years ago, without notice, workers from the city of Covington descended on tiny Father Hanses Park in the city’s Lewisburg neighborhood. They dismantled the swings, the slide, the shelter – everything -- hauled it all away and left an empty lot in the middle of this hardscrabble neighborhood.

The park had become a spot for drug use, vandalism and hookups, so it had to go.

The loss was a setback to an already forgotten neighborhood.

Located just off the 12th Street exit from the Brent Spence Bridge, Lewisburg’s fate for the last 60 years has been intertwined with the bridge and with Interstate 71/75, one of the busiest highways in America.

When the interstate arrived there in the early ‘60s, its eight lanes of concrete cut off Lewisburg from the rest of Covington, creating an island that was prone to crime and unappealing to businesses and home buyers.

The park was just the latest slap in the face. Not long after it was torn down, people lost interest in the Lewisburg Neighborhood Association. Once a voice for the community, it fizzled out.

But Stella Terrell hadn’t lost her voice. She couldn’t believe what happened.

She rang up the Covington parks department. “I said, ‘I use this park, for me and my kids. This is where we have our Easter egg hunt and stuff. We can’t do this.’”

Her complaints ultimately paid off. This spring, city workers were back at the park, this time installing a brand new jungle gym, seesaw, slide and benches. City officials rechristened the park at an April ribbon cutting.

Now, Stella and her Hermes Street neighbor, Donna Roth, are back at the park, organizing crafts, games and picnics for neighborhood kids. For them, Lewisburg without a park was unthinkable.

“I refused to let that happen,” she said. "’Cause these kids … that’s all they got.”

The park is indeed one of the few places kids in Lewisburg can run around and be kids. Many of its old houses are small or divided up into rental units. Yards are tiny or nonexistent. Some streets are considered unsafe. Interstate traffic roars by all day and night.

The park had been a focus of neighborhood involvement, but when it was torn down, enthusiasm waned.

“The energy was pretty good there for a while,” said former Covington mayor Sherry Carran. “They got discouraged. People get burned out when they don’t see any support. They felt like the city had forgotten them.”

The loss of a neighborhood park – at one square block, it’s really more of a playground –may seem insignificant. But in a community that’s felt isolated for years and has coped with more than its share of crime, the park was one of the few shared spaces to rally around.

This is the latest in WCPO.com's Our Forgotten Neighborhoods series.

Neighborhood update: In June, Mount Airy was awarded a $30,000 grant from Cincinnati to replace street lights in its business district. It did not receive a $350,000 grant it requested to buy property next to the district, but is working with the city to find funding.

Neighborhood update: South Cumminsville was just awarded a federal "Local Foods, Local Places" grant to create a plan to improve access to healthy food, and create jobs and make use of vacant land and greenspace while doing it.

Tiny Lewisburg is dotted with more than 100 vacant buildings and lots, according to Covington’s Center for Great Neighborhoods. Many of the houses, built as single-family homes more than 100 years ago, have been converted into multi-unit rentals, ensuring a transient population.

Although only about a thousand people live in Lewisburg, tens of thousands drive right past it each day. Most, unless they’ve made a trip to enjoy a beer and a burger at Herb and Thelma’s tavern on Pike Street, won’t even know it’s there.

An Anchor in Lewisburg

Since 1939, there’s been a tavern at the corner of Pike and Western in Lewisburg. It began as Heine’s Social Club. In 1961, Herb and Thelma Boehmker bought and named it, naturally, Herb and Thelma’s.

Herb and Thelma’s has been an anchor in Lewisburg ever since, attracting the hungry and thirsty with its cold beer and hot burgers.

Joe Fessler bought the place about three years ago. He cleaned it up a bit, but kept the name, the focus on simple food and good beer, and an atmosphere reminiscent of simpler times.

It’s a gathering spot, not just for Lewisburg residents, but for anyone who appreciates the comfort of a cozy tavern.

“We have presidents of companies, CEOS of companies, sitting next to construction workers, next to people who might only have $10 to their name,” he says.

Families come in. On a recent Tuesday afternoon, a dad, daughter and grandson stopped in for lunch.

Dave Ziegler says he comes in two or three times a week. When he was a kid, his dad took him there. As he talked over lunch, he said he’d be back later that night for a gathering of “the Ludlow guys,” Ludlow High School grads and others from that Northern Kentucky town. Ziegler was expecting a big crowd in the little bar.

“I’ll try to get here a little early so I can get a place to park,” he said.

Fessler worked for 20 years in the food service business, then owned a fund-raising business, which he sold. Six months after he and his wife bought Herb and Thelma’s he asked her, “What the hell did we do?” Business was slow.

Then the tavern showed up on a magazine’s “best burgers” list and word started getting around.

The plans for a new bridge would further affect this community. The latest plan calls for more than a dozen houses to be torn down and the interstate’s footprint to be widened.

It’s not the sort of neighborhood that attracts young homebuyers. But Michael Topmiller and his, wife, Jenni, both in their mid-30s, bought a home there anyway nearly two years ago.

He grew up in the well-off neighborhood of Villa Hills, lived with his wife in Erlanger for eight years, and in sunny San Diego before that while in graduate school.

“If you had told me a few years ago that I would be living here, I would’ve said you were crazy,” he said. “Most of my family told us that we were crazy for moving here.”

But Lewisburg has assets, and it was a neighborhood anchor – Prince of Peace School -- that attracted him and his family. Prince of Peace is a Catholic Montessori school that draws families from around Northern Kentucky, even from across the river in Cincinnati.

“We wanted to be close to the school as possible, and we loved the house,” he said.

You can’t get much closer to the school. They live in a pre-Civil War mansion, built by the Hellman lumber family, and it’s right next to Prince of Peace.

The school and its sponsor church, St. John, are rocks of stability in Lewisburg. The Sisters of Notre Dame have run the school since 1875 and at one time, lived in what is now the school’s attic. It’s the school home to about 120 students, ages 3 to 14.

Sister Mary Ellen, one of two nuns remaining, teaches Spanish and art, and was the school principal when she began her ministry there in 2001.

She remembers being humored by the welcome she and her fellow sisters received from the neighborhood toughs. “They’d be strolling down the lane and they’d say ‘Welcome to the ‘hood sisters!’ Whenever there was a fistfight or something on the street, they’d come over and say, ‘Now sisters, you stay inside.’”

Even with the problems in the neighborhood, she says, “This is the best place I’ve ever been.”

For Lewisburg to grow and attract homebuyers and other investment, many agree that political leaders need to make some decisions about the Brent Spence replacement.

A new bridge has been on the public agenda for nearly 20 years, but fights over tolls and how to pay for it have stalled the project. That’s put Lewisburg in a state of limbo, with people reluctant to buy or invest in property without knowing the plan.

“We almost didn’t buy this house because we weren’t sure what was happening,” Topmiller said. “People are reluctant to invest because of that uncertainty.”

“I just wish they’d make up their minds and tell us what’s going on,” said Joe Fessler, the owner of Herb and Thelma’s.

Business and government leaders have been talking about replacing the bridge for two decades. Plans and designs have been laid out in neighborhood meetings, changed -- and changed again. Financing plans have been detailed, agreed on, then rejected. Politicians have intervened, not to speed the project, but to stall it. The project is essentially at a standstill.

Lewisburg neighbors have lived with a highway in their backyards for years. Many accept the prospect of a new bridge, which might even improve the neighborhood with better access.

They just don’t know when, or if, it will happen.

So Covington’s political leadership, including its state legislators, should summon the courage to press for action on long-delayed decisions on bridge and highway design and, most perplexing, how to pay for it.

If they don’t, Lewisburg will remain in limbo.