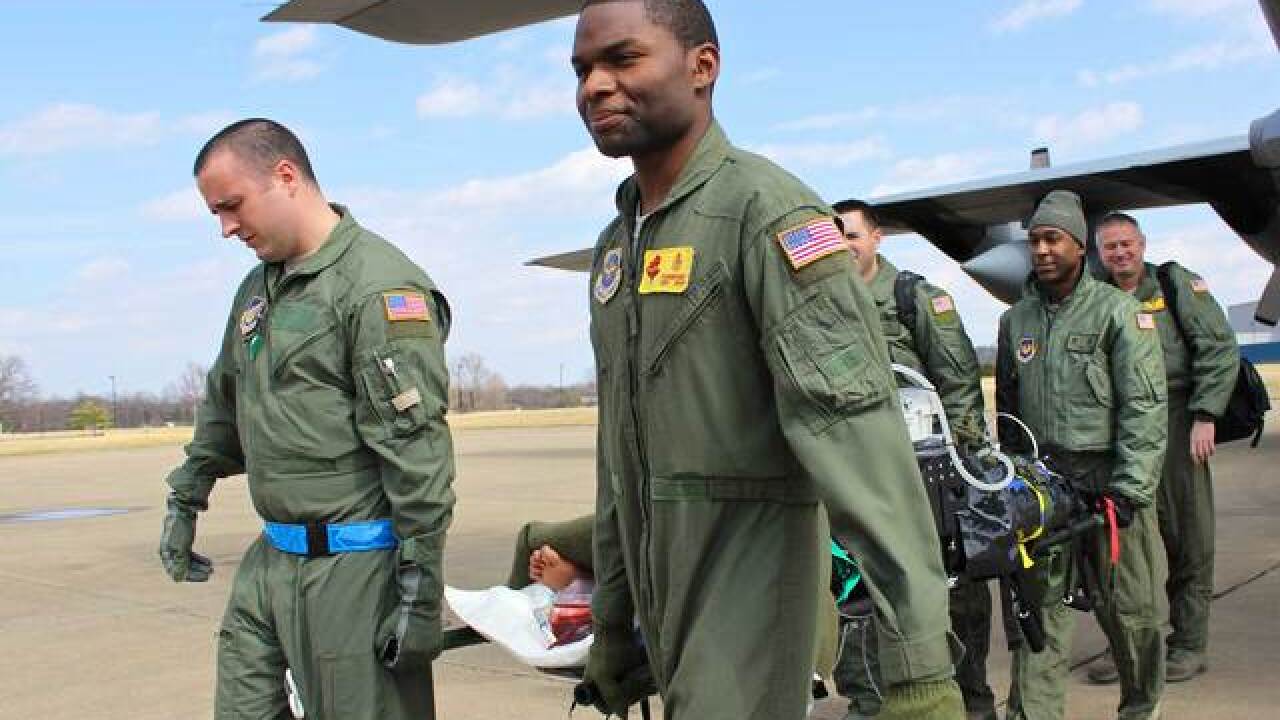 As our nation's longest war winds down in Afghanistan, thousands of military families can thank an elite group of U.S. Air Force medical providers for bringing their critically-wounded loved ones home alive. Those doctors, nurses and respiratory therapists were trained at the University of Cincinnati's Medical Center in a program largely modeled after the civilian hospital's life-saving methods.

WCPO followed the military medical workers from the Cincinnati classroom to Afghanistan's Bagram Airfield, where one team would be called on to save a man's life.

They're on a mission: To take the most gravely injured soldiers out of war. When the 4 a.m. call comes, this medical team must decide if the critically-wounded man can be saved. The infection from a gunshot wound is growing worse. Will he be healthy enough to fly? Watch the video above to find out if he survives.

He did what every trained solider does in war: He ran to his position to fight back.

But before the South Lebanon man could make it to his post, the searing pain of one, two, three bullets tore through his body ripping through many of his vital organs.

Then the grenade blew up in his face.

Leininger was covered in blood. As he struggled to breathe, he prepared to join the more than 2,200 military men and women killed in America's longest war.

"It seemed like it was forever, waiting there, bleeding out. I was just ready to put all the suffering away," he said of the 2012 injuries.

Medics scooped the then 22-year-old up and performed emergency procedures in the back of a helicopter. He was gravely injured. Officials told his parents to expect the worst. Within days, Leininger was flown out of harm's way. He soon landed safely back on U.S. soil and was reunited with his parents.

It was a reunion more than 5,600 military families owe to Cincinnati-trained elite Air Force medical teams – the only people equipped to bring critically injured troops like Leininger back home.

'A Little Bit Of Cincinnati Flying Them Home On Every Mission'

Long before Leininger was reunited with his family, the medical team that kept him alive in flight went through rigorous training at the University of Cincinnati Medical Center – just 30 minutes from his hometown.

Welcome to the Center for Sustainment of Trauma and Readiness Skills.

This is the classroom and simulation center where more than 1,500 Air Force medical airmen and women have learned to perform emergency medicine on life-like mannequins before they are deployed to the battlefield.

The high-level military training is conducted on an undisclosed floor inside the civilian hospital in Mt. Auburn, where its $1.2 billion trauma center transforms into a military war zone about a dozen times a year. Military men and women, dressed in flight suits and camouflage uniforms, mingle among civilian doctors who roam the halls in scrubs. Top military officials occasionally visit the Air Force's $1.1 million operation here, too.

This center is one of just three such training sites where military doctors train and work alongside civilian doctors.

It is the only spot where those military medical personnel are cleared to join the elite Critical Care Air Transport Teams, CCATT, who fly wounded soldiers, sailors, marines and airmen across the world.

And those same military teams are modeled largely after the hospital's life-saving methods that put an emergency doctor, nurse and respiratory therapist in ambulances decades ago to keep critically wounded civilians alive during transport.

"If the truth actually be known, the whole concept of this CCATT team … represents the same kind of team I was taught to use back during my training here in Cincinnati," said Dr. Jay Johannigman, an Air Force colonel who now heads UC Medical Center's trauma and critical care center and is the man largely responsible for bringing the training to Cincinnati.

A series of realizations and recommendations largely borne out of lessons learned in the Gulf War in the mid-1990s put military doctors inside a civilian Houston hospital in 1999 to train. That program disbanded two years later.

At about the same time, Johannigman said he was working at the Pentagon when the Air Force was looking for other hospitals to jumpstart the Houston program: "I knew Cincinnati so well since I trained here and I was surrounded by a bunch of good people so really what we did was put our hand up and volunteered."

With that raise of the hand and medical commitment, the Cincinnati center was launched. The work there will continue indefinitely, he added.

"In its own unique way, Cincinnati has reached out and touched each of our significantly wounded soldiers during this conflict,'' the doctor said. "They have a little bit of Cincinnati flying them home on every mission."

Just each other and their training

At least 1,220 students have graduated from the Cincinnati course since 2003, according to the Air Force, which does not pay UC for the use of its hospital.

There are 18 military instructors and two administrators who work at the center. When they aren't teaching or on deployment, they treat critically injured civilians in the hospital's emergency rooms.

Each CCATT military team consists of just three people – an emergency physician, a critical care nurse and a respiratory therapist. Those three are trained to transport up to six patients on military transport planes. The flights are sometimes more than 12 hours long.

Essentially, that team replicates an intensive care unit in the back of an airplane without all the high-tech equipment and zero specialists.

"The thing that makes it so challenging is you have no backup. You know, when you're in the back of that aircraft, you're it," said Maj. Daniel Cox, medical course director for the Cincinnati center. "You can't get a consult."

It's just the team and their training.

"Even simple things like listening to the heart and listening to the lungs when something isn't right on the monitors—all of that is taken out of your realm," said Capt. Sabrina Akhtar, a CCATT doctor.  "You can't hear anything on an aircraft because the noise level is just too high."

It's loud. It's dark. The aircraft trembles. There isn't much space to do the job.

That's why the students are first tested during two weeks of rigorous graded simulations in a 14-foot-by-14-foot hospital room.

"We very much want them to experience that gut wrenching insecurity and sense that this is getting away from me," Johannigman said.

Some say it's harder than the real thing.

"It's like a roller coaster … Your heart starts pounding and you know that you have a little time before it really just hits you … It's always, it's always edgy no matter how many times you've been in it, how many times you've done it,' said Staff Sgt. Dorjhan Gibbs, a respiratory therapist completing his eighth simulation and his second CCATT course.

'Sickest of the sick'

But it's still just a simulation. It's nothing compared to the moment these medical providers realize they're transporting some of the most traumatically-injured patients the U.S. has seen.

"It's shocking to see just a young face with such drastic injuries and such invasive monitors, lines and medical equipment on them," Akhtar said.

They're hooked up to ventilators, hardly able to breath.

"If we're seeing them, they're the sickest of the sick," said CCATT nurse Sarah Batzer.

The first question is always: Will the patient survive the flight?

More than 20,000 U.S. soldiers have been wounded while fighting in Afghanistan since the war started in 2001. The international combat mission ends on Dec. 31.

Military doctors say patients are sometimes in such bad shape that most hospital doctors wouldn't feel comfortable moving them down the hall. But these doctors said they have no choice but to get the critically wounded warriors from the battlefields and into sterile environments to recover. And hopefully back home with their family.

From Afghanistan to the streets of Cincinnati

Air Force Maj. Daniel Cox has just about seen it all – here and at war.

program has deployed three times – including once to Afghanistan, where he served as head surgeon inside the largest U.S. military hospital there.

"The severity is not really replicated in the civilian trauma that we have," he said.

The closest U.S. doctors came to treating the type of blast injuries seen in Afghanistan was after the Boston Marathon bombing in April 2013.

But even so, the lessons Cox and other have learned at war are used every day in emergency rooms in Cincinnati.

"I had a patient come in with a devastating pelvic fracture. He had massive [bleeding] from this pelvic injury that was very similar to what we deal with in IED blasts," said Cox, who's also an assistant professor of surgery at the hospital. "The same techniques that we used dozens of time on soldiers and these IED blasts, we used those same techniques on him and were able to get him out of the operating room alive."

As a Level I trauma center, doctors at UC Medical Center are often the first to see the bloody aftermath of accidents and violent crime. Emergency doctors saw 85,335 patients in 2013 – 3,402 came with traumatic injuries.

"You understand that war creates injuries and you are going to take care of them," said Johannigman. "[But] sometimes it gets very difficult coming back home to Cincinnati and seeing equally grievous wounds committed either because of lack of good judgment or over drug deal gone bad or a 16-year-old with a weapon who shoots another young man and creates these same kind of horrible injuries, but not in the context of what you are prepared for, which is going to war.

"The war we have here is still very real, too, on many nights."

Johannigman said eight of the 15 doctors in the civilian trauma department have military medical backgrounds.

At least one Air Force medical provider assigned to UC Medical Center is deployed at all times to bring back real-time medical lessons from the battlefield.

"People are alive in Cincinnati today -- I have no doubt -- because we've done everything we can to make this hospital function as efficiently and as medically effectively as Bagram Air Base's hospital," he said.

She traveled to Bagram Airfield in Afghanistan for two weeks in September to document the medical teams that trained at UC Medical Center. She was embedded with the U.S. Air Force's 455th expeditionary aeromedical evacuation squadron and also lived with U.S. Army flight paramedics from Charlie Company 3-82.

She interviewed dozen of people, recorded hundreds of hours of video and took hundreds of photos.