The Tri-State lost a hero: Lauren Hill never gave up 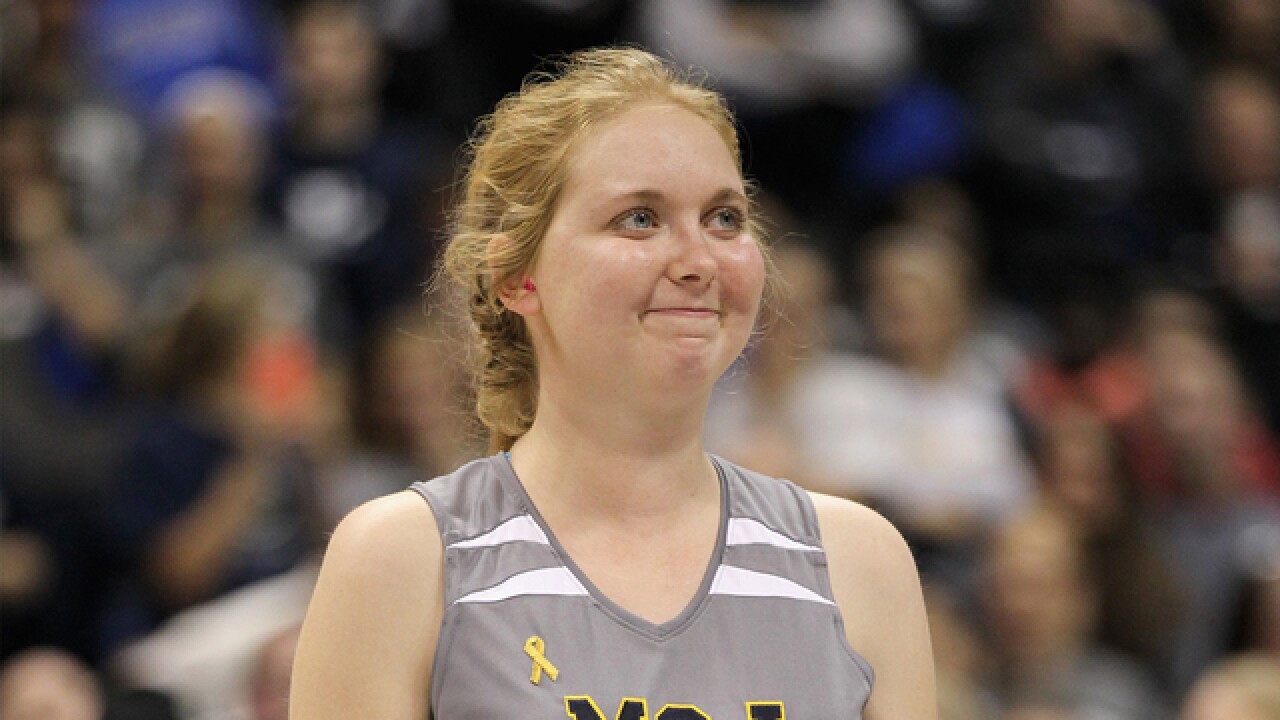 "She was a hero. She was a hero and she showed cancer who's boss." - Lauren Hill told WCPO's Tanya O'Rourke how she wants to be remembered on March 18

CINCINNATI-- Lauren Hill's motto was "Never Give Up." She hoped to inspire kids suffering from her deadly brain cancer - and everyone, really - to follow her message, find hope in her example and live their lives to the fullest.

The 19-year-old fought off a brain tumor to play college basketball and inspired a nation to spin around and shoot layups and contribute to her crusade against pediatric cancer.

She held off her deadly disease for many months longer than her doctors expected, until she just couldn't anymore.

The Cure Starts Now announced Lauren Hill's passing early Friday morning -- and the Tri-State, children with cancer, the sports world – all of us - lost a hero.

Lauren knew this day was getting nearer and last month she told WCPO's Tanya O' Rourke she wanted to be remembered as "a hero" and not as a "quitter." Somehow, she feared that the kids who looked up to her would think she had quit on them.

Her friend, Devon Still of the Bengals, wanted to set that straight once and for all Friday. Hill and Still became comrades in arms over the last six months as the Bengals lineman guided his 4-year-old daughter, Leah, through her own fight with cancer. Hill and Still stood by each other with support and encouragement.

"When you die it does not mean that you lose to cancer. You beat cancer by how you live, why you live, and in the manner in which you leave." Lauren never let this terrible disease define her. She didn't let it control whether she lived out her dream of playing college ball and she fought to live pass what doctors originally told her she would. Lauren left her mark on this world by showing people what it really meant to NEVER GIVE UP. So would I say she lost her battle with cancer? Hell no! Because of her fight and selfless act of using her fight to raise an incredible amount of money and awareness, doctors will one day find a cure for DIPG! It hurt like hell seeing the news this morning and i'm not even sure how I'm going to tell my daughter. In the past two weeks, two kids that I have met and develop relationships with have passed from cancer smh something's got to give its not right #For22 #LaurenStrong

A public visitation and memorial service will be held Monday at Xavier University’s Cintas Center, where Lauren realized her dream and played in her first college basketball game for Mount St. Joseph University.

At the Mount, sadness and tears filled Lauren's basketball teammates and coaches at an outdoor prayer vigil. Blue Solo cups were arranged in a chain-link fence to form "22," Hill's jersey number. The afternoon sun was bright and warm, but it did nothing to ease their grief. Coach Dan Benjamin's voice cracked as he called her an angel. After prayers and "Amazing Grace," teammates gathered in a tearful huddle, arms around each other, and wept. Finally, they raised their arms like they did before practices and games last season and chanted, "1-2-3 ... Win for 22."

With his eyes red from crying, Benjamin described a touching scene in Lauren's hospital room when he and the team visited her just hours before she died.

"[I was] laying next to her in the hospital bed, holding her hand, thanking her. Her mom looked at me and said, 'Coach, tell her it's OK to go.'

"I did everything I could to let her know," Benjamin said, "but like Lauren, I told her mom, 'She's going to go when she's ready to go.'

"The toughest thing," Benjamin said, "is missing her and not being able to hold her and hug her and see her smile."

"We can’t thank everyone enough for their sentiments and kind words. Lauren truly moved a nation and we will be forever grateful to everyone for helping her achieve her dreams. We ask for you to respect our privacy as our family makes our next plans.”

LeBron James and other celebrities went on social media and joined the Tri-State in mourning Lauren.

Hill leaves a legacy that will be remembered for a long time, not only here but around the country.

Given her own dreadful diagnosis at age 18, the then Lawrenceburg High School senior set out to raise awareness about her rare pediatric cancer, DIPG, to be the voice for victims too young to speak about their pain and feelings, and to raise money for long-neglected research.

"Spreading awareness has been my goal throughout this whole thing," she said last fall. "I wanted to help kids because I feel so terrible that this is happening to a lot of people and nobody knows about it.

VIDEO TRIBUTE: Lauren Hill showed us how to move mountains

And she had another goal - to satisfy her own desire to play college basketball – even after her cancer had weakened her body, diminished her skills and plagued her with dizziness, severe headaches and joint pain.

To this date, Lauren has raised more than $1.5 million for cancer research through her Layup4Lauren challenge,  jersey sales and donations, attending many fundraising events even as her health eroded.

Before she ever took the court last fall, Hill created a national sensation to rival the ALS Ice Bucket Challenge. It started when she challenged Andy Dalton and Andrew Whitworth of the Bengals and some basketball notables  to spin five times and shoot a layup with their non-dominant hand. The idea was to imitate her handicaps on the court. The Layup4Lauren challenge spread across the Tri-State and the country. Thousands of famous athletes like the Harlem Globetrotters, entertainers, college and high school teams, non-athletes and admirers joined in and donated to her cause.

It was really just child's play, though, compared to the ailments she overcame to play, even for just a few moments.

By the time the Mount was set to open the season, Hill's story had spread across the Internet, and the first game drew a sellout crowd of 10,250 to the Cintas Center. Nearly 3,000 came from Lawrenceburg to watch their favorite daughter.

The greatest coach in women's basketball history, retired Tennessee legend Pat Summitt, was there to present Hill a college basketball courage award in her name. Summitt, in early stages of Alzheimer's, arranged for friends to drive her four hours from Knoxville for Hill's first game.

What happened was one of the most thrilling moments in Cincinnati sports history. No. 22 made a layup on the first play and the crowd erupted.  In the last minute, the crowd chanted, "We want Lauren," and Benjamin put her back in the game.

Hill made another layup, and her legend was secured.

"This game was amazing and it was amazing in every way. It's just a dream come true to play on the college level," Hill said at a news conference afterward. "It was great to just be able to put my foot down and feel the crowd through the vibrations in the floor boards.

"I just wanted to play. I just love it so much. I love basketball," she said.

LeBron, Mia Hamm, Billie Jean King and other sports stars went to Twitter and paid tribute to her.

Though her first game was billed as "One Last Game" for Hill, she wouldn't have it. She astonished everyone by playing in three more over the next six weeks, before finally hanging up her now famous No. 22  for the title of honorary coach.

She finished with a total of 10 points, but in the box score of life, she scored more than a million.

That was the total in the Lauren Hill Tribute Fund when she died. That's how many dollars she raised through the Cure Starts Now Foundation. Hill believed in the mission of The Cure Starts Now, founded by a Mason couple after their 6-year-old died of DIPG. Doctors convinced Keith and Brooke Desserich that finding a cure to DIPG  will lead to a cure for all cancers – the  "home-run cure" - so the money Lauren raised goes directly to underfunded research for DIPG.

"They are going to find something that helps them live longer because just a little kid, 5 years old, that's not enough. That's not enough," Hill pleaded that day.

If her first game was the thrill of a lifetime, reaching her $1 million goal just before New Year's, during a telethon on Dec. 30, seemed to please her just as much or more.

And to see it happen after doctors told her she wouldn't live to see Christmas? Well, just imagine how that must have felt.

"Reaching that goal is amazing," Hill said, surrounded by her family and The Cure Starts Now people who helped her realize her dreams since her diagnosis in November 2013. "I mean, to reach it this fast and to have so many people that care enough to donate … Thank you, everybody that's here. Thank you, everybody that donated and are still donating. And I hope that donations don't stop with this."

Hill's health deteriorated rapidly over the last six weeks, and she suffered mostly in private, as she always had. In public, though, she almost always wore a smile.

She had more happy moments, as when she went back to her high school for basketball homecoming and passed on the crown she had worn as homecoming queen the year before.

And when Mount St. Joseph had a private ceremony to award her an honorary doctorate.

At the end of the ceremony, Hill put on her blue superhero cape.  Her aunt had a friend make it for her, and Hill  wore it when she visited kids with cancer at Cincinnati Children's Hospital. She even had one made for 4-year-old Luke Knapke, who became her special friend.

Lauren knew her death was drawing nearer, but she could only think about life.

"I've learned that life is really special," Hill said, "and there's something good in every moment."

We will miss Lauren for the joy she showed us on the basketball court and in the life she shared so publicly with us.

We will miss her for the good she spread and for the lessons she retaught us.

Never give up. Never.

You can donate to the Lauren Hill Tribute Fund here.