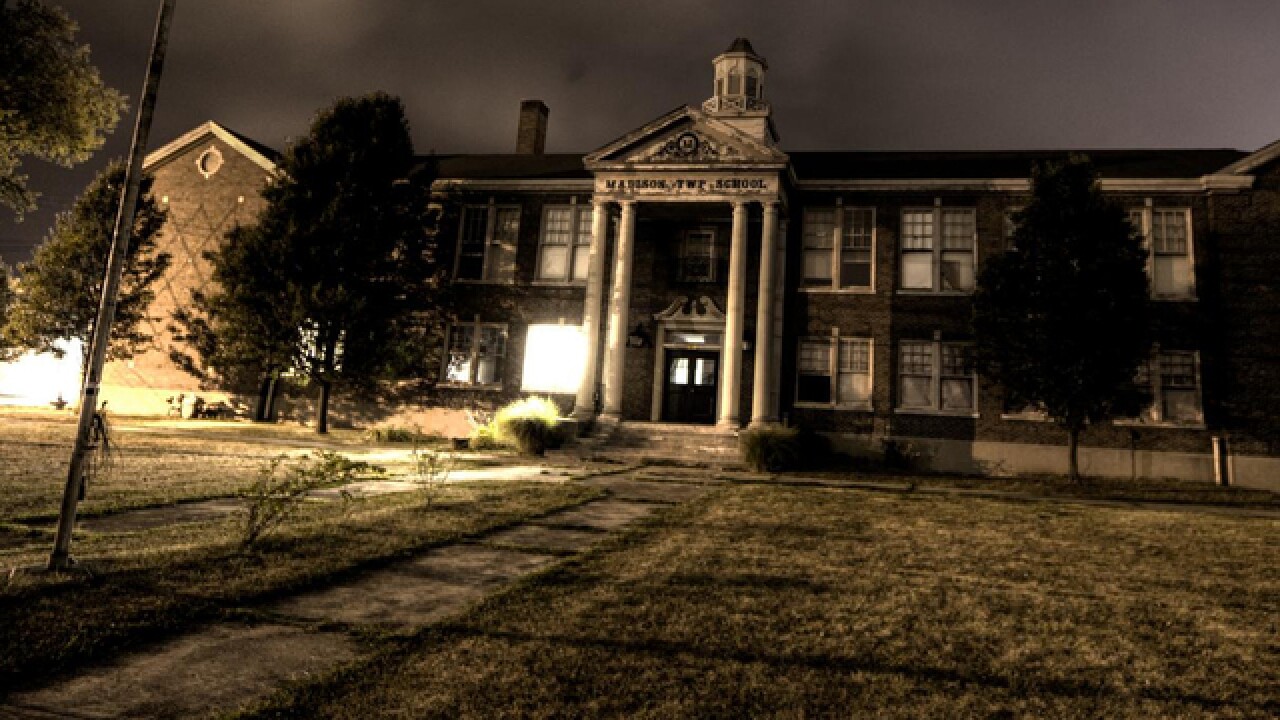 WCPO originally published this story in 2016 and has brought it back as part of our special coverage of local legends leading up to Halloween. For more real-life stories of the "paranormal," go to wcpo.com/haunted.

MADISON TOWNSHIP, Ohio – When Darrell Whisman says his school haunts him, he’s not being figurative.

The 59-year-old started attending classes at Poasttown Elementary School in 1963. More than five decades later, he’s still walking the halls, sipping from the drinking fountain and cleaning the chalk boards.

Except now, the former Madison Township school is his home. And according to him, some of the kids are still there, too.

"We’ll hear a desk being drug across the floor above us. We’ll hear little kids’ footsteps," Whisman said. "I’ve heard voices with my own ears when nobody is here but me and my wife. I just can’t explain it."

Whisman knows he sounds crazy. When he bought the building in 2004, five years after the school was abandoned and closed, he didn’t even know what a haunted house was.

He thought that meant evil clowns, chainsaws and walls closing in on you.

Then one of his friends, a man he describes as "big and tough," let out a shriek while doing some construction work on the top floor.

"He runs down to me. He can’t catch his breath and he’s saying, ‘There’s something up there,'" Whisman said. “I thought maybe a dog or possum got inside. But then he says, 'Dude, it’s a ghost.'"

Whisman later told his wife -- also a former Poasttown Elementary School student -- about the ordeal. The two had a laugh but decided to call in a local paranormal group.

'When you leave, you believe'

More than 100 paranormal investigators have since combed through Poasttown’s 54 rooms, each with their own experiences and so-called evidence.

Whisman also opens the building to members of the community for various uses. On an average day, a group of camouflaged "survivalists" can be seen roaming around old classrooms and the gymnasium, practicing for the apocalypse. The empty rooms have even been used for police and fire training, a nail salon, a massage therapist, a weightlifting club, a fallout shelter -- you name it.

And everyone who visits tends to go home with a new understanding of the word "haunted," according to Whisman.

That’s what led to Poasttown Elementary’s official motto: "When you leave, you believe."

"I’ve had so many skeptics that come here that don’t believe in anything," Whisman said. "But there’s so much activity in here, they don’t know how to explain it."

A man named Peter Post laid out the community of Poasttown in 1818. The area was originally known as West Liberty, according to records from the Middletown Historical Society. Poasttown built its elementary school in 1937. Today, the area is considered Madison Township.

Whisman said no one has ever died in the school as far as he knows, but he has a few theories about what’s causing those eerie sounds and tense encounters.

There were two train crashes about a mile away from the property, one in 1895 and the other in 1910. Both happened on July 4.

The 1910 crash, considered the worst railroad crash in Butler County’s history, involved the head-on collision of a passenger train and a freight train. The impact killed 24 people and injured at least 35, according to Middletown Historical Society records.

Some historians say the land that later became Poasttown's school was used as an emergency triage area for the train crash victims, Whisman said.

As spooky as that story is, Whisman said he doesn’t totally buy it being the cause of his "paranormal" woes.

He likes another theory better.

"The paranormal teams have told me, when you pass away, sometimes if you don’t cross over, you go where you were the happiest," Whisman said. "And a lot of children were happiest at the elementary school. To me, that makes more sense."

Inspecting the other side

Paranormal investigator Mike Palmer has visited Poasttown with his team of investigators two times in the last year.

Palmer founded the Paranormal Investigators of Northern Kentucky -- also known as PINK -- in 2005 and has since completed more than 200 cases involving homes, businesses and schools.

He said he’s not like a lot of "ghost hunters" in that he doesn’t like to use the word "haunted." But for him, there’s no question: There’s something otherworldly going on at Poasttown Elementary School.

"It’s very rare for our instruments to simultaneously go off and do so on command," he said. "This place is definitely active."

Lisa Trump, one of PINK’s members, isn’t afraid to confess that once the lights go out at Poasttown, "things get creepy."

During her second visit, Trump said, she became ill and had to leave the building. She said she doesn’t believe there’s anything evil hiding in the shadows. But she, too, thinks the spirits of children are lurking about.

"I think that maybe they’re here to teach us something," Trump said. "This has been a place of learning for many years and I think these spirits choose to come back and help us learn more about the afterlife."

PINK’s team members have spent thousands of dollars on audio and video recording equipment for their investigations over the years. During one of their outings at Poasttown, they captured audio of what they believe was the spirit of a gruff, older man.

"A friend that I was with said she felt something run past her feet," Trump said. "I asked her if it was a spirit and she said ‘No, I think it was a critter.' And then you hear a man say, 'Russ will eat it.'"

Palmer said he knows he has skeptics, but he doesn’t care.

He said he starts every investigation with an open mind and hopes others out there who listen to or view PINK’s findings do the same.

"To the believer, there’s no proof necessary," Palmer said. "To the non-believer, no proof is ever enough."

'I plan on dying here'

Whisman claims visitors to Poasttown have had their names called out and have even been "touched by spirits."

He said he’s never felt unsafe moving through his hallways alone at night, but admits to walking a little faster than usual when he hears a strange noise.

Those noises aren’t coming from a paid actor like at a typical “haunted house," Whisman said. “This is real."

It costs $25 per person to visit and stay overnight at Poasttown on a normal weekday. On weekends, that cost is $35 per person.

Whisman said he doesn’t always charge money. He loves planning community events and inviting children and their parents to "have fun in a safe environment," he said.

"There’s nothing better than to watch the community get to enjoy this building, too," he said.

Whisman calls himself the school’s protector, meaning he’ll never tear it down or sell the land. He’s pretty adamant about that.

He wants to make sure there are always spirits there to visit.