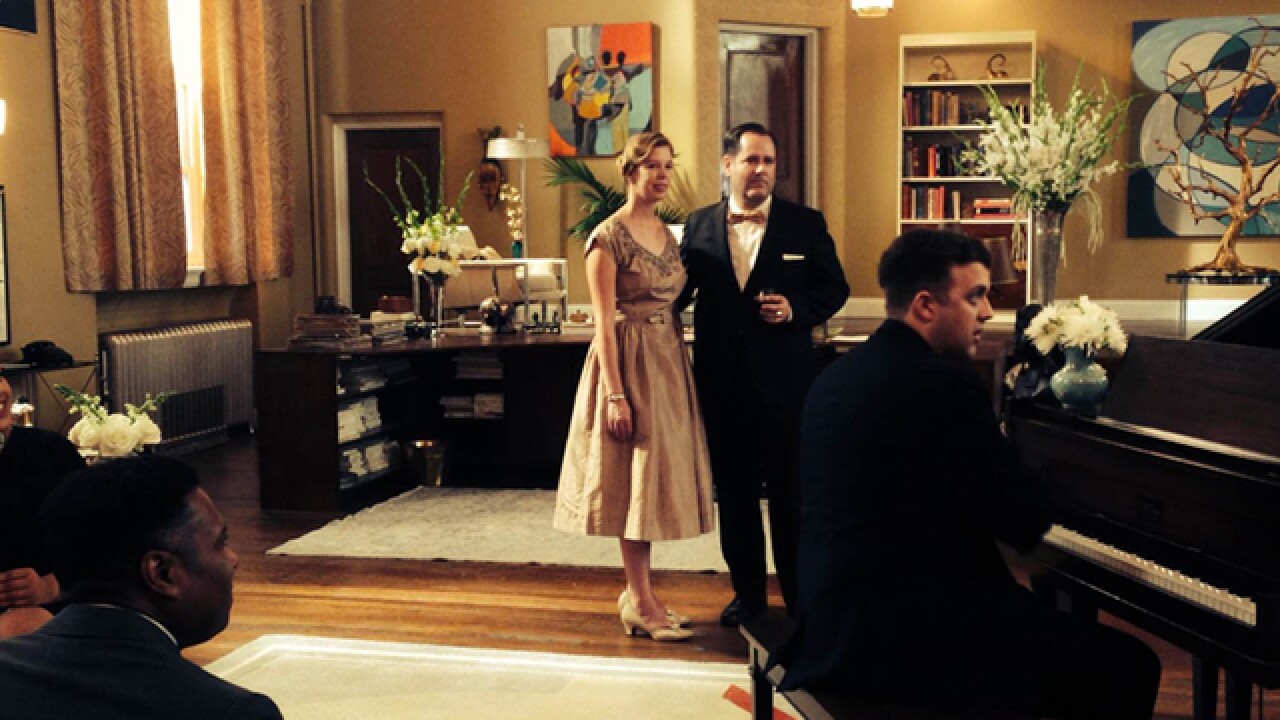 <p>Wendy and David Freeze's home, the former Oakley Presbyterian Church, served as Miles Davis' home in the filming of "Miles Ahead." Shown: The Freezes (center) served as extras during filming of a wedding scene.</p>

CINCINNATI – Filmmakers in California and New York can shoot entire projects on back lots and soundstages. When they go somewhere else to shoot, they are looking for two things: tax credits and real-life locations.

Ohio's approval of a tax-credit program in 2009 has drawn so many movies, television shows and commercials that clusters of people standing on the street with cameras, cables and boom microphones have become common sights. (Example: "Marauders," the movie starring Bruce Willis and Adrian Grenier that filmed in Cincinnati in October.)

And they're welcome, too, in light of the money they bring to town.

Last year, the three productions big enough to qualify for tax credits spent $27 million in Cincinnati, according to the University of Cincinnati’s Economics Center.

Hundreds of spots in and around Cincinnati have been used as movie locations over the years. But the most popular by far is an entire neighborhood. Over-the-Rhine, with its blocks of period architecture, is on virtually every location scout's must-see list.

“We've been calling it our secret back lot since ‘A Rage in Harlem,’” said location scout/manager Alan Forbes.

Much of Over-the-Rhine can stand in for older versions of New York City, said Hannah Beachler, who was production designer on “Miles Ahead,” the Don Cheadle film about jazz icon Miles Davis.

“New York these days is very changed,” Beachler said. “The alley (Wilkymacky Alley) we shot in was gorgeous. You could not find an alley like that in New York now.”

Other areas with intact buildings from the 19th century through the 1950s often end up on film, too – Covington's Second Street historic district and parts of Madison, York Street in Newport, and Fourth Street in downtown Cincinnati have been used repeatedly.

The interior of the old Second District police building on Broadway off East Fourth Street was turned into an ad hoc soundstage for “Carol”; locker room and cafeteria scenes were shot there. “Carol” also used Spare Time Grill, an old-fashioned diner in Alexandria, Ky., with an on-camera resume dating to 1988's “Fresh Horses.”

Recently, a historic home in Wyoming and a modern house in Hyde Park were used in the upcoming Mariah Carey-directed TV movie, “A Christmas Melody.”

As productions continue to flow into town, more locations are being put to use, said Kristen Schlotman, executive director of the Greater Cincinnati & Northern Kentucky Film Commission.

“Now we are showing our range,” Schlotman said.

Sites around the city have even been used to represent Mexico and Los Angeles. “We have faked beaches with palm trees. The only things we can't do are desert and mountains,” Schlotman said.

When David and Wendy Freeze bought a partially renovated former church in Oakley for their new home, they knew they were in for surprises.

Little did they know how many.

“Three days after we bought the house, Don Cheadle showed up to look at it,” said David Freeze.

They did not learn until the closing that the previous owner already had agreed to let “Miles Ahead” use the building. They decided to delay their own move-in date by three months, in part because the movie company agreed to make some permanent improvements, such as installing a spiral staircase, creating custom curtains for the 25-foot-tall windows and turning the sanctuary into a dramatic living room with gleaming woodwork.

They replaced the faux-kitchen and '70s-style bathroom sets the movie crews left behind, but consider the entire experience – including appearing as extras in a wedding scene at the house – worth the time and trouble.

“I do not regret it at all,” Freeze said.

It takes money – compensation to property owners, permit fees and other costs covered by the film companies – and cooperation among public agencies to make location shooting work.

Since 2002, Sgt. Greg Lewton has represented the Cincinnati Police Department’s special-events office when production crews come to town. In that time, he said, they have refined the process by getting all the involved agencies to sit down with film crews to cover all bases.

The meetings include police, fire, sometimes parks, transportation, engineering, public works and even city council representatives; there have been times when minor statutes must be changed to accommodate a movie's needs.

“We have a lot of experience now,” he said.

His biggest challenge, he said, is sudden changes in the shooting schedule that can send him scrambling to reschedule officers on traffic duty.

Not all filmmakers are that cooperative, including a few who want to follow a model established elsewhere. “It's our job to let them know this is Cincinnati, and this is the way we do things,” Lewton said.

Lewton credited the “Carol” crew with being good to work with, including director Todd Haynes. He admitted the director occasionally focused so closely on what he was doing that he forgot what was going on around him.

However, said location scout and manager Deirdre Costa, “I’ve done movies in other cities where there’s a lot more red tape and where you don’t have the level of cooperation that there is here in Cincinnati. … Barbara Hall, the unit production manager on ‘The Ides of March,’ commented to me that the things we pulled off in Cincinnati couldn’t be done in most cities. Barbara actually warned the crew that they wouldn’t have the same kind of flexibility once they moved up to Detroit to finish filming.”

Costa, Forbes and Schlotman all describe Cincinnati as “film-friendly.” For some movies, it's friendlier than usual.

“It was like the entire city rolled out the red carpet,” said Costa. “Every location I called or scouted wanted to be involved and help George out. … The lead accountant on the movie said that she had never seen so many $1 location agreements in her career.”

We All Benefit From Economic Impact

All that activity falls under the heading of economic development.

According to an analysis by UC’s Economics Center, productions large enough to qualify for Ohio tax credits spent $27 million in 2014 in Cincinnati. The area's share of the credits paid to film companies was $924,405.

See the break down of film costs.

Create your own infographics

This year's report is delayed because a few projects are not yet finished, Schlotman said, but she expects the state's overall return-on-investment for incentives to be at least as healthy as last year's $1.75 for each dollar rebated.

In addition to wages, supplies, lodging and other costs, economic benefits show up in everyday commercial settings.

It’s Not Always Perfect, Though

Once in a while, things go wrong.

Forbes recalled that during the filming of the 1988 rollerblading movie “Airborne,” a stunt skater making the hairpin turn from Dorchester onto Sycamore had a bad moment: “These guys were the best you could find at the time, but one lost it and got wedged under a stunt car.”

The mishap stayed in the movie.

When Costa was working on “Lost in Yonkers” (1993), she notified most residents of a Ludlow apartment house that a special-effects crew  – “who looked like a ZZ Top cover band” – would be wetting down the building with fire hoses. They needed the residents to close their windows on all but the highest floor because the water wouldn't go that high. Except it did.

“The poor guy who lived in the top-floor apartment got blasted with water coming through his window while he sat watching TV," Costa said. "The guy ended up being a lot more forgiving than I would have been! We, of course, dried things up for him and compensated him for the inconvenience.”

Things have changed since the '80s and '90s, when big productions began arriving. John Sayles blazed the trail to Over-the-Rhine and the rest of the region with “Eight Men Out,” a 1988 movie set in the first decade of the 20th century.

It was during that production that then-17-year-old Christy Cauley and a friend were able to do something that would be virtually impossible today: They made their way onto a set at the Railway Exposition Company site in Covington and hung around the make-up trailer waiting for stars.

That's where they encountered Charlie Sheen, who signed an autograph for Cauley.

“I don't know how we did it. We called his hotel room (at the Netherland), too, and John Cusack answered the phone."

Cauley tried to interview Cusack for her school newspaper, with strange results.

Want Your Property to Be in the Movies? Think it Through

How would you respond if a movie company asked to use your home or business?

The experts say you should begin by asking questions.

“Is it a million-dollar movie or a $25 million movie?” said Lewton. That can determine “how things are shot, how quickly they're shot, what they can actually do to help out” financially.

Location shooting is particularly challenging for low-budget independent filmmakers, like Chenney Chen of Plum Street Productions. She said she has occasionally paid a few hundred dollars to use a business for a few days, but noted that homeowners and small businesses often are happy to lend space for no money at all.

“Maybe they like the publicity, or they like to support the arts in some way – if you're honest about what you are planning on doing with it,” she said. “I've shot in locations like Atlanta and San Francisco. They want a dollar just for using a sidewalk in front of a building.”

Filmmakers prize flexibility, because shooting schedules can change on short notice. They also will ask about noise, said Costa. “Having a location close to active train tracks, in a flight path or by a construction project can end up costing a lot of time and money.”

Chen said people often are surprised at how time-consuming location shooting can be. It may take hours, including setup and teardown, to shoot what ends up as a minute or two in a finished product.

Forbes said people are sometimes shocked at the degree of disruption involved in location shooting.

“The process of making a movie on location is messy. Everybody is there with their stuff, they come in looking like Pigpen because they've been outside working.”

Luckily, he said, “afterward when they clean up, you can't tell there was a film crew there.”

Despite the best preparations, though, sometimes problems arise that require extra compensation.

“The people I protect are fledgling businesses that are not on their feet, and loss of revenue can hurt,” he said. That doesn't mean a location shoot equals a blank check. “Once in the last 20 years, some merchants in a small town got together and tried to hold us up. So we went to a different small town.”

Generally, said Forbes, “Location managers are pretty transparent. It's easier to be honest up front than apologize in arrears.”