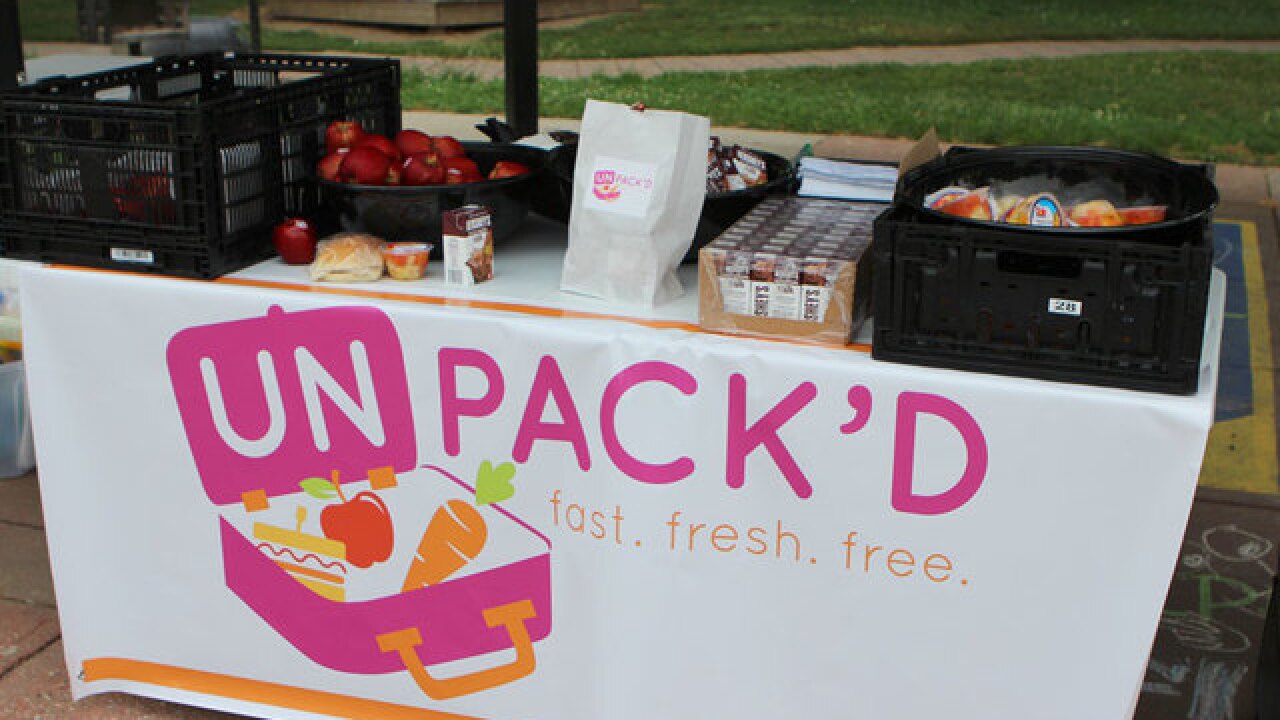 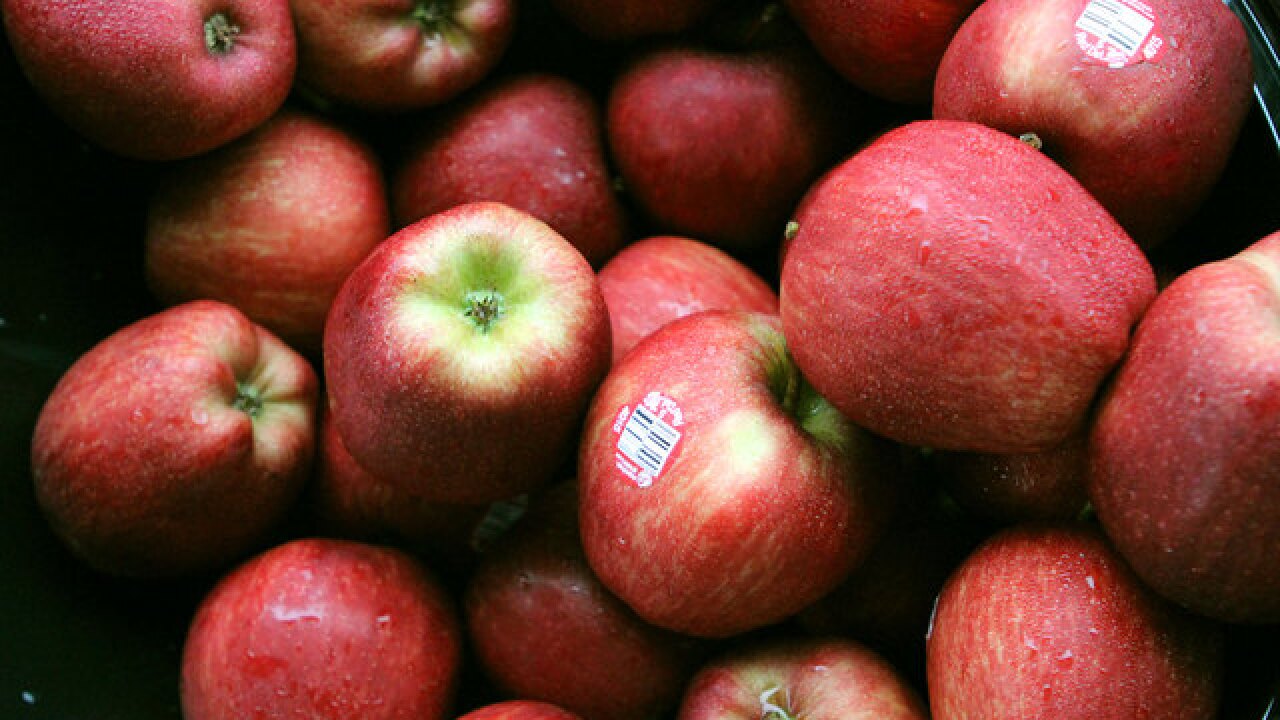 CINCINNATI — Caitlin Behle cranked up the music and was setting up a table of food at a park across from Oyler School in Lower Price Hill when Deadrian Midell and his friends walked past her.

The teens stopped, looked over the food and then took some of Behle's white paper bags. Each bag had a turkey and cheese sandwich, an apple, a cup of tropical fruit packed in juice and either water or chocolate milk.

"They were really nice and polite," 14-year-old Deadrian said afterward. "And, I mean, they fed us."

With that brief exchange, Deadrian and his friends became the first customers of UnPack'd, the latest pilot program by Freestore Foodbank and Design Impact to get healthy food to hungry kids during the summer months.

"During the school year, roughly eight out of 10 kids are eligible for free and reduced lunches at school," said Kurt Reiber, CEO of Freestore Foodbank, which distributes 20 million meals each year in Ohio, Kentucky and Indiana. "But during the summer months, only 9 percent of those kids take advantage of any summer feeding programs."

That means tens of thousands of kids across the Freestore Foodbank's 20-county service area aren't getting enough to eat during the summer, Reiber said. Two new initiatives are designed to address that. Design Impact and Freestore Foodbank tested Culinary Camp earlier this summer — a program aimed to make summer feeding programs more interesting and interactive.

RELATED: Teaching kids to cook their way out of hunger

The idea behind UnPack'd is to bring healthy food to places where kids gather in neighborhoods where household incomes are low and kids are less likely to be getting enough to eat.

"There's a lot to be said for meeting the kids where they're at," said Behle, a social innovation specialist with Design Impact.

WCPO tagged along during the first day of UnPack'd, and Behle confessed later that she had no idea what to expect.

She and colleagues at Design Impact had scouted potential sites for what Reiber described as the "pop-up picnics." They worked to make the environment inviting, with a specially selected song list playing and slick branding that emphasized the food was fast, fresh and free.

The first location, across from Oyler School, started off slow.

Behle grabbed some flyers and went inside the school, where some teachers suggested she visit a nearby sprayground. After that, kids and parents and grandparents started filing through, even after it began raining.

"It's great from my point of view," Hopkins said. "It will keep the kids' minds off the streets."

James raced toward the playground's swings and told his mom more than once that he wasn't hungry. But Hopkins assured him that he would be and waited nearby while each of her kids got a sack lunch.

By the time they were ready to pack up, Amanda Meredith of Sprout Insight had counted 28 kids who had gotten food at the park and three adults who had to be turned away because the program is aimed at children.

They expected to see even more kids the next day as word spread that they would be back.

There was no shelter at Dempsey Park in East Price Hill. So Behle, Meredith and Pam Mawhinney, Freestore Foodbank's assistant director of community partnerships and programs, set up a canopy to create a shady spot for UnPack'd that would keep the food dry if it rained again.

Once again, Behle cranked up the music and invited teens walking by to come get a sandwich. One or two did, but foot traffic was slow again. So Behle walked down the hill to Dempsey Pool to drum up more business.

Kids walked over, some in pairs and some in larger groups.

Eric and Travis Bellamo walked up the hill with their cousin, Kevin Bray.

Eric said he had already eaten because his grandma is the lunch lady at Dempsey Pool. But, being growing boys, all three took sacks of food from UnPack'd and plunked down on playground equipment to eat.

By the time they arrived, UnPack'd had fed 18 kids and had another 10 or so in line.

That's when Behle looked up and spotted a few adults walking about two dozen little kids past the pool and up the hill to get sandwiches. They were from a nearby daycare, and they had heard about the food, too.

Behle jogged down the hill and explained that UnPack'd didn't have enough for them but that they would be back the next day and bring more.

The adults and kids turned around and headed back to the daycare as Behle made her way back to the canopy.

Freestore Foodbank's Cincinnati Cooks culinary program participants had made 65 sandwiches in all for the first day of UnPack'd. In just two, 30-minute stops, Behle, Mawhinney and Meredith had given away all of them.

As painful as it was to turn away the kids from the daycare, Behle was pleased that the initiative was such a success from the start.

"I feel awesome," she said.

Planting Seeds for Next Summer

There is still a lot for Design Impact and Freestore Foodbank to learn from UnPack'd. But the fact that the initiative went to the kids and offered healthy, fresh food that was packaged in an attractive way in an inviting environment seemed to work well, she said.

"Plus the fact that they got to choose between water and chocolate milk," she said. "It can be empowering."

Empowering kids could be one of the most important lessons to be learned from Culinary Camp and UnPack'd.

Design Impact and Freestore Foodbank worked earlier this year with No Kid Hungry, a Washington, D.C.-area nonprofit, to talk with local teenagers about why so few teens wanted to take part in summer feeding programs.

Culinary Camp and UnPack'd were separate efforts from that work. But the teens' insights helped the adults at the various nonprofit organizations understand better why so many hungry teens didn't go to summer feeding programs hosted at local schools, recreation centers or libraries.

The teens said they didn't like taking handouts. They wanted to learn to cook. And they wanted choices instead of being served small portions of food or drinks they might not like.

All those opinions helped shape how Design Impact created Culinary Camp and UnPack'd.

"Hopefully, we can take those best ideas and take them out to a larger-scale audience next summer," Reiber said. "If we can serve maybe five out of 10 kids with these types of programs, that's making a difference. That's making an impact."

And it could make a summer away from school a lot more filling for thousands of kids across the region.

Freestore Foodbank is in the midst of its massive Rubber Duck Regatta fundraiser. To find out more about how you can "buy a duck and feed a child," click here.