Could toxic chemicals along the Ohio River be a danger to our drinking water? 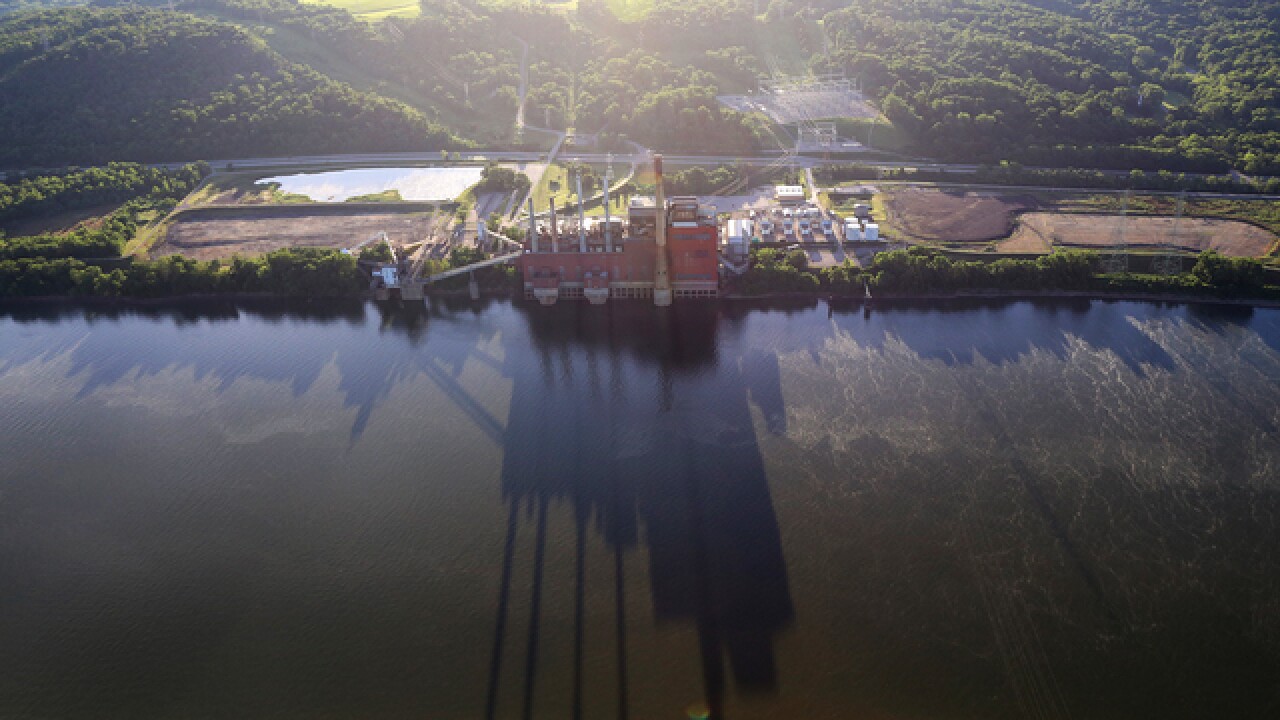 At a closed Duke Energy power plant, at least 10 billion pounds of coal ash containing these toxins and more are sitting on the banks of the Ohio River – a source of drinking water for more than 5 million people.

How the polluted ponds got there is a story that began long before environmental laws were created to keep people and drinking water safe from toxic waste.

How much longer the dumps might stay — and put our drinking water at risk — is a saga that’s just beginning to unfold.

“Think about what happened in Flint, (Michigan), and think about just how important this is to public health and safety,” Clermont County Commissioner David Uible said. “To think that this day and age, that we have a water supply right next to these ash pits, it’s just unbelievable.”

“The worst-case scenario is that you get a major flood on the Ohio, then you get a breach of the dams and all that ash is washed into the Ohio River,” said Paul Braasch, who leads Clermont County’s Office of Environmental Quality. “Then you have a plume of ash going down the Ohio River. That’s a big problem, and lot of bottled water to be handing out.”

As early as next year, Duke Energy has said it will begin tearing down the more than 60-year-old plant. The electric utility giant closed the plant in late 2014 just the U.S. Environmental Protection Agency was writing new federal standards for how coal ash ponds should be managed.

Although federal rules went into place in 2015 that set new standards for how coal ash ponds should be managed and closed, the guidelines don't apply to Beckjord because the plant closed in 2014. That means most of the rules for how the coal ash ponds are closed will fall under a limited set of Ohio laws governing coal ash ponds.

“Ohio is one of the largest coal ash producers in the country, and they have some of the worst state regulations,” said Lisa Evans, an attorney with  Earthjustice,  a nonprofit D.C.-based environmental law firm. “These ponds fall into a very dangerous regulatory gap.”

So far, Duke hasn’t said what its plans are for the ash ponds, which span nearly 170 acres of riverfront in New Richmond and Pierce Township.

The company has been “conducting comprehensive scientific and engineering studies at the site to determine the best method to safely close ash basins,” Duke’s Ohio and Kentucky spokeswoman Sally Thelen said.

But some say that might not be enough to guard against the biggest threats that ash-polluted ponds pose.

"The public should be very concerned," Evans said. “These ponds are filled with some of the worst poisons for human health.”

Across the country, there is a “plethora of examples of problems” from these coal ash sites, said Frank Holleman, an attorney with the Southern Environmental Law Center . He points to incidents in Pennsylvania, Tennessee and North Carolina where lack of maintenance and attention at aging power plants led to massive spills of coal ash into nearby rivers and streams from ponds like those at Beckjord.

A WCPO review of government and environmental records reveals a history negligence and pollution at the Beckjord plant and a big dilemma with coal ash that stretches across Ohio.

It all adds up, environmentalists say, to a risky situation that could put our drinking water in jeopardy.

“I don’t know how anyone can dispute the fact that if you put coal ash in giant unlined pits right next to huge water ways that you can’t avoid contaminating the water,” said Holleman, who has represented clients in lawsuits against electric companies including Duke.

‘Hoping Duke does the right thing’

As Duke considers its next steps, leaders in Clermont County have asked the company to outline its plans for the ash pond closures by early July.

Specifically, the county wants the coal ash to be removed from at least two ash ponds on the site known as Ash Pond A and Ash Pond B. Leaders have also asked that Duke continue to monitor groundwater around the site as long as  any coal ash remains there.

“We don’t want to be forced to close other water wells,” Uible said. “We’re just hoping that Duke does the right thing.”

Elsewhere, Duke has come under fire for its mishandling of coal ash.

Duke is now paying more than $100 million in fines and other penalties to clean up the damage after more than 39,000 tons of coal ash spilled into the Dan River near Eden, North Carolina.

“If something like that were to happen on the Ohio River, it would be catastrophic,” Uible said.

Following pressure from state lawmakers and advocacy groups, Duke is now removing the coal ash it kept in unlined pits at 14 sites across North Carolina.

Meanwhile, leaders in other states have joined North Carolina in calling for more oversight of coal ash ponds.

In Illinois, stronger protections are needed “to make sure no company can simply cap their toxic waste and walk away without a full clean up plan,” said Illinois State Senator Melinda Bush in a May press release. “We must make sure these sites have positive re-use opportunities so that they can be a future financial asset to local communities.”

Back in Clermont County, that’s exactly what Jim Comodeca is hoping for the Beckjord site. The Pierce Township resident lives just a few hundred feet from the Ohio River and Duke Energy’s Beckjord property.

“It’s just a hulking monstrosity there, and as it continues to fall into disrepair it’s going to be more problematic,” Comodeca said. “That piece of property is vital to the welfare of the county.”

For it’s part, Duke is “talking with a number of stakeholders,” including the Ohio EPA, as it considers its closure plans at Beckjord, Thelen said.

The company sends out periodic newsletters to update neighbors on the progress of its work to close the plant.

"The scope and scale of the decommissioning operations are extensive, and we appreciate our neighbors’ patience as we continue to make advancements at the site," Thelen said.

But since the federal rule on how ponds should be closed went into place after Beckjord was closed, the guidelines don't apply.

Under Ohio law, coal ash ponds are regulated as wastewater treatment lagoons. The state’s closure requirements depend on whether the coal ash is being left in place or removed, said James Lee, a spokesman for Ohio EPA.

“If left in place, requirements include dewatering the material and capping the pond," Lee said. "If the utility plans to remove the material, it can be taken to a landfill.

At least one contaminant is known to be flowing from the site into area ground water, according to water quality reports that contractors Duke hired conducted at the Beckjord site. Duke shares the reports quarterly with the Ohio EPA and  Clermont County. Just a few hundred feet east of Duke's ash ponds are nearly a dozen Clermont County public water wells.

“There are still sulfates coming off that site,” Clermont County’s Braasch said. “And we’ve seen the (amount) going up over time.”

While sulfates aren’t known to cause cancer -- like high levels of lead or arsenic -- large amounts in drinking water can cause diarrhea and other gastrointestinal problems, according to the National Institute of Health.

The quarterly water reports also detail the levels of arsenic, lead and barium in the groundwater, all of which remain below limits set by federal standards, Braasch said.

The contaminant was first discovered leaking from the Beckjord site into the area groundwater in the late 1980s, before Duke Energy owned the plant. By 1993, Clermont County had shut down a public-water well that served thousands of area residents after high levels of the pollutant were discovered. At the time an "interceptor well system" was also installed to redirect the sulfate plume away from other neighboring drinking water wells.

Duke Energy "has vigilantly" maintained they system and "reports continue to show that the neighboring wells are safely protected," Thelen said.

But Clermont's Uible said he'd like more assurances from Duke that the monitoring program will continue as long as coal ash remains on the site.

“The last time I checked, no one was making new water aquifers,” he said.

Should the sulfates find their way into the remaining drinking water wells again, “it’s something that the county would have to remove, and that would be very costly,” Braasch said.

That same report notes that of the 57 coal ash disposal sites in the state, 44 are unlined and at least 40 have no regular ground water monitoring plan to detect leaks from the site.

Across Ohio, risk and impact to ground water from coal is "poorly documented," according to the report, "due to the lack of ground water monitoring."

Furthermore, Ohio does not have laws ensuring that companies are financially responsible for covering all the costs of closing their toxic ponds or the long-term care of those ponds.

For now, officials in Clermont County say they are still waiting word on Duke’s plans for its ponds.

"Duke tells us, ‘We’re evaluating what our options are, and thank you for your input,’” Braasch said. “It always comes down to, Is the threat worth the economic expense of protecting against it? We all make those tough value judgments, but a corporation’s view tends to be on a shorter time frame of quarterly earnings compared to what could happen years down the road.”