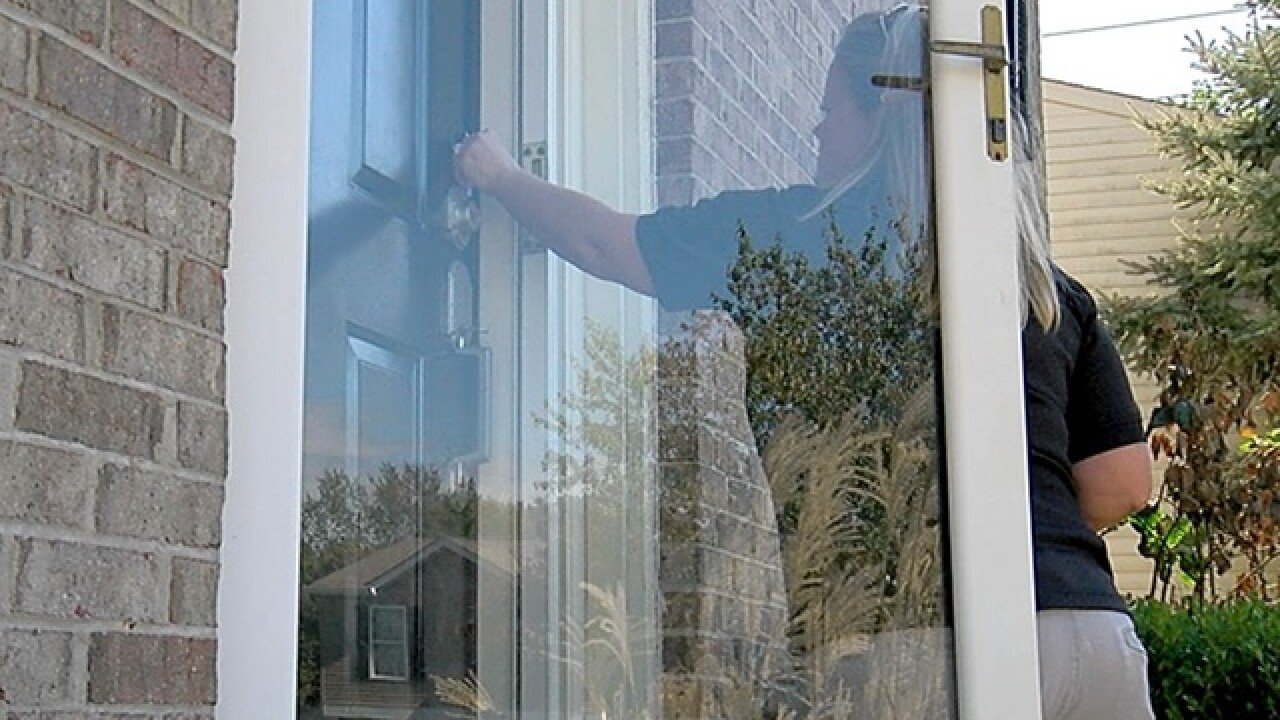 “When I kissed my son’s beautiful face, I told him I was going to make a difference and he was going to leave a legacy,” Weinel said.

Now, Weinel carries out that promise as a volunteer with the Alexandria Acts Angel Program.

The initiative, which Police Chief Mike Ward and the Alexandria Police Department started, aims to provide long-term solutions for people using heroin. The program not only helps people get into treatment, volunteers help them move through recovery to find jobs or educational opportunities.

Ward said he’s seen a lot evolve in his 17 years as chief, but he’s never seen anything suck the life out of his city like the heroin epidemic has.

On the surface, Alexandria doesn’t look like a place that would have a heroin problem.

The small town’s Main Street is a quaint stretch leading to U.S. Route 27. The old Alexandria Bank houses a consignment shop almost directly across from the courthouse. A family-owned bakery is near the only stop light on the strip.

“I remember the '70s when I was a young teenager, and the heroin epidemic … that was inner-city," Ward said. "That was big city. That was people sitting in dark corners, shooting up their arms. I remember all that as a kid. I knew no one that did it. Now, I just don’t get it.”

There were 55 overdoses in Alexandria in 2016, according to data from the Alexandria Fire Department. This year’s numbers will surpass that. There were already 54 overdoses as of Oct. 1. Six were fatal.

Ward hired Kelly Pompilio in June 2016 to spearhead the Angels Program, which made Alexandria the only police department in the state with a full-time police social worker.

Armed with a dose of Narcan, brochures and her business cards, Pompilio responds to every overdose in the city. She knocks on the doors of homes where people have overdosed and tells them she can help them find treatment.

“If an overdose occurs ... I try to follow up in one to two days, because that’s typically the good time frame to try to catch them before they’re out using again,” Pompilio said. “I just go out and tell them what my program is.

“If they’re not interested, I follow back up in a couple days, a week, and then just continue to leave a card, make a phone call to say, ‘Hey, we’re still here if this is something you’re interested in.’”

Pompilio started her door-to-door outreach in December. Since then, she has helped 10 people get into treatment and recover from heroin addiction.

It’s not yet 11 a.m. at the Alexandria Police Department.

Pompilio and Weinel sit beside each other at a table covered in binders, stacks of paperwork and thick Manila envelopes. Pompilio sighs softly as she flips through police reports.

“So here’s one we had over the weekend,” Pompilio said. “He overdosed on heroin. He was revived by the squad with the use of Narcan and oxygen.”

Weinel scribbles notes. She asks Pompilio if she knows whether the man is interested in treatment. Pompilio says she’s not sure. But it doesn’t matter, really. Like anyone who overdoses in the small town, Pompilio and Weinel will reach out to him regardless.

“So it’s just … showin' up, showin’ him some love and resources, that’s the plan, right?” Weinel said.

Pompilio calls volunteers like Weinel “angels.” Each of them have experienced heroin in some way.

Some were addicts themselves. Others have lost a family member. Some have a loved one who is currently addicted, and one man is just tired of heroin in his community.

If an angel is available, they go with Pompilio to do outreach.

Pompilio and Weinel drive through a quiet subdivision. The yards are well kept. American flags whip in the wind. It seems like the last place you’d find heroin.

Pompilio gets out of the car. Her radio buzzes over faint sounds of lawnmowers and crickets. Her body camera sways as she walks up the stairs to knock on the door.

She tucks a card into the door. It reads, “The Alexandria Police Department recognizes that substance abuse is a disease. We understand you can’t fight this alone!”

Pompilio said she doesn’t get discouraged when people don’t come to the door. They often don’t. She’s left more than two dozen cards at doors over the last year, and that doesn’t count the multiple cards she’s left at the same homes and apartments.

Pompilio and the angel try to get the heroin user to meet with them in person. If they’re willing to meet, she and the angel will take down information such as how long they’ve been using, what kind of treatment they’ve tried and what their support system looks like.

The most important part of the discussion, Pompilio said, is for the user to identify what is stopping them from seeking treatment.

Every heroin user with whom Pompilio has spoken in person expressed interest in treatment, she said.

“The actual addicts that I’ve talked to themselves, that I’ve been able to meet, they’re a 100 percent success rate,” she said.

Pompilio’s outreach has made a difference within the police department and the community, Ward said. People have called the department at all hours of the night, asking for Pompilio.

“We have been able to not just reduce our calls, but we’ve been able to help families work through some of these problems… She’s having a huge affect on people’s lives that, as a police department, we’ve never been able to have that effect before,” Ward said.

‘It takes a team’ to find heroin users treatment

Finding a treatment facility for someone addicted to heroin is not an easy task.

It takes a team, Weinel said, and that’s exactly how Pompilio and her angels operate. They communicate through a group messaging app to try to find an open spot at a facility.

Kelly Pompilio: Anyone know any detox beds available? Or can anyone make phone calls looking for detox beds

Christina Weinel: I don’t know any available but I can make calls let me know the details

For Pompilio, it’s not enough to just hand someone a list of resources.

Once someone expresses interest in treatment, Pompilio and her angel volunteers call facilities. They file paperwork. Pompilio has even helped people apply for health insurance.

She’s helped family members file Casey’s Law, Kentucky legislation that allows the parents, relatives or friends of a person with an addiction to intervene and request involuntary, court-ordered treatment.

“The biggest thing I do is helping families in crisis getting linked to what they need and being able to make those phone calls for them,” she said. “With our drug treatment programs, each addict, I probably call 10 facilities each time and put them on waiting lists, find out what insurance they accept, what the waiting list is, what their program looks like, their availability -- and for a family member to have to do that when they’ve already been emotionally drained, that’s very difficult.”

Pompilio has worked with local facilities from Brighton Recovery in Florence to the detox unit at St. Elizabeth in Falmouth.

But she’s had someone go all the way to Recovery Works in Georgetown.

“The guy that we just got in Georgetown … I didn’t have a bed for him, and he said he would going to be using two to three times a day until I found him a bed," Pompilio said. "And we all know what that could look like.”

Pompilio and her Angels will drive people to treatment. They recently traveled four hours to Louisa, Kentucky because that was the only bed available.

If there are no beds, Pompilio tries to get them through the detox phase with medication-assisted treatment such as suboxone or Vivitrol.

Treatment is vital because it provides an extra layer of support for the person using heroin, Pompilio said.

Pompilio admitted that she gets frustrated at times, but it never lasts long.

“The minute that I get somebody into treatment or the minute I talk to a family member who is struggling, it gets me going again,” she said.

‘Instead of putting people in jail, they’re trying to help people recover’

Cody Canaday understands the impact Pompilio has on the community. He’s felt it firsthand.

Canaday is the program’s first success story: The 22-year-old credits his 11 months of sobriety to his mother, Pompilio and the Angels Program.

Canaday said his heroin addiction began with using prescription pain medication “like everybody else does.” He says he was 16 when he became addicted to pills.

And just like many people who become addicted to opioids, Canaday moved on to heroin. He said he first snorted heroin after he had been using pills for two years.

“As soon as I did that, I just fell in love with that … it was over,” Canaday said.

He never had a hard time getting it. The Alexandria native only had to drive 20 minutes to Cincinnati to find his fix.

“They’ll give it to you for free up there," Canaday said. "If you go there and you just drive around with your windows down and find the right car, they’ll just give it to you. It’s easily accessible.They’ll just throw it in your car.”

His mom knew he was using heroin. Canaday said she tried to get him help on multiple occasions, but he refused.

Police arrested Canaday after his mother filed for involuntary treatment under Casey’s Law.

Canaday says he now looks at his arrest as a blessing.

“At first, I was obviously kind of mad and had mixed emotions and felt lonely because she was the only person I could rely on, and she was the one who called the cops and put me in jail,” Canaday said.

He said his time in jail saved his life. He was there for 10 days before his angel, Rick Rosenhagen, could find him a treatment facility.

Canaday said his “wake-up call” moment came when he attended a 30-day program.

“When I figured out I could actually live my life sober … that was the turning point for me,” Canaday said.

It’s hard for Canaday to think about his state a year and a half ago.

Now, he uses Vivitrol to curb his cravings. He has a full-time job, and he’s working toward helping others with opioid use disorders.

He has even brought friends who are addicted to heroin into the police department to talk to Pompilio.

“Going from me, myself being an addict, to actually being able to help people now, it’s just … it blows my mind,” Canaday.

If he were still alive, Weinel’s son would now be about the same age as Canaday.

“The work I do is to honor him, and I can’t help but believe that if he didn’t have the stigma and the shame attached, if he would have had someone surrounding him that was educated -- because at the time I was ignorant -- I could have helped him,” Weinel said.

Weinel says she sees her son every day in the people she helps.

“Don’t we all wish at times we’d had an angel?”