From The Vault: Watch 9 (or more) great moments in Ken Griffey Jr.'s Hall of Fame career 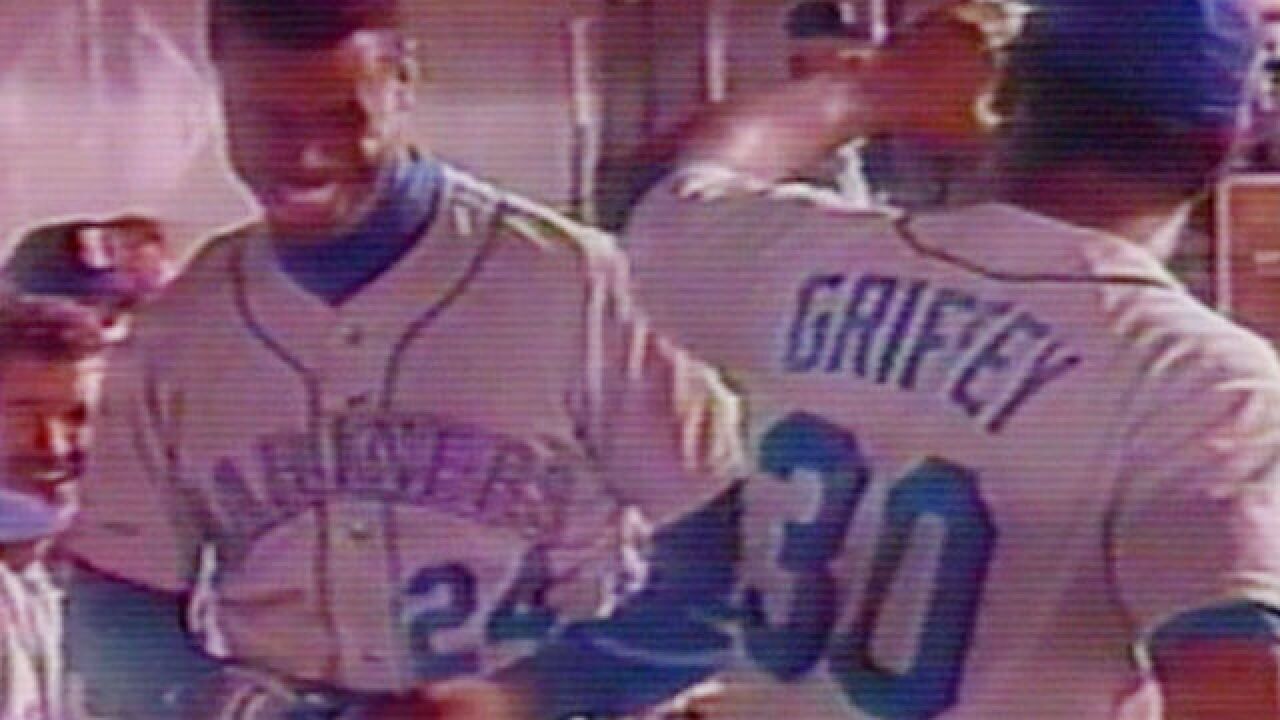 EDITOR'S NOTE: WCPO is looking back on Ken Griffey Jr.'s life growing up in Cincinnati, stunning success and Hall of Fame career. See all of our coverage at WCPO.com/griffey. Watch Sunday's induction ceremony at 1:30 p.m. ET on MLB Network or www.baseballhall.org.

CINCINNATI – When I started looking at Ken Griffey Jr. highlights in order to pick the top 9, I decided that it would easier if WCPO 9 On Your Side changed channels to 99 On Your Side.

It's impossible to condense Junior's Hall of Fame career into the 9 greatest moments. Even narrowing it down to 99 would be difficult. After all, he hit 630 homers and made almost as many incredible catches. So I picked some favorites -  mine and Junior's.

I didn't ask Junior – he's busy prepping his induction speech. But he says in a story on The Players Tribune website that his most memorable major-league moment was hitting back-to-back homers with his dad, and his best play was robbing Luis Gonzalez of a home run with an incredible catch at old Tiger Stadium. So I started with those two and, dozens and dozens later, I never got tired of watching.

A father and son had never played on the same team before, they haven't since, and probably never will again. Two weeks earlier, in their first game together, the Griffeys hit back-to-back singles. But back-to-back homers? Impossible, until they did it. You had to get the idea that impossible things would be happening every day when Junior, only 20 at the time, was on the field. ICYMI: Junior played one spring training game with his young brother. Craig Griffey was the Mariners' 42nd-round draft choice in 1991, but he never made the majors.

When he was young and fearless in Seattle, Junior had so many highlight catches, ESPN should have retired the Web Gem when he retired. There was Junior running to the fence and reaching 3 feet over it to rob Jesse Barfield  of his 200th homer.

There was Junior, fearlessly running at the wall, planting his foot to break the impact and stealing extra bases from Kevin Bass. Junior happened to break his wrist and miss 75 games, so maybe it wasn't worth it in the long run. But it was iconic Junior.

This had to be Griffey's greatest moment on the field as a Red, partly for reasons explained in No. 9 below. But mostly because it was so fulfilling. It came on Father's Day (his fifth dad's day homer), with his dad and mom and family sitting next to the dugout. He got to hug them and soak in the rousing ovation from a ballpark packed with 45,620 of the best fans in baseball, who cheered him as if he was one of their own. And it stamped his ticket to Cooperstown. Finally, it brought some redemption, coming after three injury-filled years  that soured some Reds fans and robbed him of his chance to be the all-time home-run king. Griffey finished the season with 35 homers, a .301 average and the Comeback Player of the Year award.

When he was 19 and debuting at the Kingdome,  Griffey homered in his first at-bat in front of the Mariners fans – on his first swing. How could he top that? Of course, he did again and again, first with his dad, and perhaps most notably, when he hit five homers against the Yankees in the 1995 AL Division Series – the only one the Mariners have ever won. Two months before that,  he set the stage for that series when he hit a walk-off homer to beat the Yankees. It came during an incredible run when the Mariners overcame the Angels' 13-1/2 game lead and it was Junior's first homer after missing three months with his broken wrist.

There's nothing like a 500-foot homer to get a crowd rocking and the other players on the field oohing and ahhing, and Junior was one of the best at that. One of his longest was the shot at Toronto's Rogers Centre, when he hit it high into no-man's land in right - four levels above the field and over the Hard Rock Café. But even more fun than that was watching him become the first – and only hitter – to smash one off the warehouse at Camden Yards during the Derby. He came in as the reigning ASG MVP after hitting a homer off Greg Maddux and going 3-for-3 in 1992. The next year, 1994, he wouid win the first of his three Home Run Derby titles. Oh, Junior!

6. Junior ties record for consecutive games with home runs, at the Kingdome, July 28, 1993:

Junior tied the record of eight held by Dale Long and Don Mattingly with, appropriately, another tape-measure blast. Junior also went on a five-game home-run binge with the Reds in July 2003, tying the club record.

It was a red-letter day for fans and the Tri-State when the hometown hero joined the Reds. Junior and Reds owner Carl Lindner flew into Lunken Airport at night to take part in a news conference at Cinergy Field. Hundreds of excited fans gathered in the dark parking lot with "Welcome Home, Junior" signs and cheered as Lindner drove them in his shiny white Rolls Royce to the ballpark. Expectations were as high as one of Junior's towering home runs.  Junior said he came home to be close to his family, to play for his dad's former team, where he was a coach,  and to win championships like his dad did with the Big Red Machine. Lindner said he was excited to watch Junior chase the all-time home run record in the new ballpark coming next door. And there was no reason to think those things couldn't happen. Happy days were here again – until the injuries set in.

It's safe to say Junior's dreams – and those of Reds fans – were crushed by his injury bug. Reds fans had no titles to celebrate and only one winning season. The bug came back in 2006, and he missed 50 games. By 2007, though, Junior was healthy again  and on his way to 30 homers, 90 RBIs and his final appearance in the All-Star Game. Thanks to interleague play, there was another highlight for Junior. He got to return to Seattle for a three-game lovefest and a 10-minute standing ovation before the first game. Rising to the occasion, he hit two homers in the final game of the series. "It's been a lot of fun," he said afterward. "Everything I thought it would be and more."

It could have been a celebration of one of the greatest ballplayers of all time. Instead, there was something bittersweet about watching Junior become only the sixth player to reach 600. If 500 is the Hall of Fame standard for home runs hitters, 600 is the gold standard. Maybe because it happened in Miami, where only 16,003 fans were outnumbered 5-to-1 by empty seats in a converted football stadium. (What if you hit No. 600 in a forest and no one is there - does it make a sound?) Maybe because all of his injuries in nine years with the Reds robbed him of two-plus seasons' worth of games. Maybe it was believing that  if he had stayed healthy, he might already be over 700 home runs with a chance to pass Babe Ruth's 714 for third place. Maybe because everybody knew the Griffey Era in Cincinnati was about to end with no championships and eight straight losing seasons. Fifty-three days later, on the trading deadline, the Reds sent Junior to the White Sox for pitcher Nick Masset and infielder Danny Richjar.

RELATED: What if Junior had stayed healthy as a Red?

There's no reason to blame Junior for his injuries. No blaming Junior because the Reds didn't bolster their weak pitching and expected him to carry the team. No hard feelings, hopefully.

As it is, he's being enshrined with the greatest percentage of votes of all time.

Let's cheer for Junior Sunday when Baseball celebrates his greatness at Cooperstown.

SEE more videos and stories about Tri-State history in our "From The Vault" series.